Acrolein is an important chemical molecule of the global environment. It has dual importance as a by product of industrial wastes, automobile exhaust, and secondly an active metabolite of cyclophosphamide metabolic pathway. Acrolein is highly reactive unsaturated three carbon aldehyde. The importance of this chemical molecule increased several folds because of high reactivity; therefore, study has been designed with the aim to evaluate the effect of low dose (1mg/kg body wt. /day), continuous exposure (i.p.) of acrolein alone or with ascorbate (5 mg/kg body wt) for 10 days to rats .Reproductive performance of the treated rats were observed by serial mating experiments with opposite sex of the same strain. Infertility (33%) was observed when compared with controls. Most interesting finding is significant reduction (P<0.001) in the size of germ cell – populations i.e. primary, secondary and graafian follicles in medulla as well as in cortex region of the ovary as observed in experimental group. In another set of experimental group where antioxidant (ascorbic acid) was supplemented along with acrolein which shows regeneration of germ cells proliferation, suggesting ascorbate help to prevent cell-damage during cell-division in female gonads. The study was also further extended to observed genetic damage in term of chromosomal aberrations assay which reveals that significant changes (p < 0.05) were observed when compared with control groups.

In-vivo acrolein is a by product of cyclophosphamide metabolic pathway and has been found to be formed from threonine by neutrophil myeloperoxidase at sites of inflammation [1,2]. Acrolein is highly toxic in nature and therefore improve the efficacy of cyclophosphamide therapy or to reduce the toxicity of the other xenobiotics using antioxidants. Acrolein, a wide spread environmental pollutant is found in all type of smoke and is formed in polluted air as a photochemical reaction product, although teratogenecity of this molecule are well documented in literature but lack on gonads [3]. Information regarding the effect of chemotherapeutic agent and its metabolites on female reproductive system is not well documented in literature, except few reports had been documented on devastation of oocytes and premature ovarian failure in women [4,5,6]. In the experimental study on mice shows significant damage of oocytes and follicular cells has been reported [7]. In ambient air acrolein is estimated at only 0.04 to 0.08 ppm, but the concentration is increased up to 90ppm in vapor phase of cigarette smoke [8], in auto mobile exhaust [9]. Ubiquitous presence in the environment and over reactivity of acrolein becomes highly toxic in nature. In-vitro concentrations of 25 to 100 uM are lethal to pulmonary artery endothelial cells, bronchiolar epithelial cells and both bronchial and cardiac fibroblasts [10,11,12,13]. Acrolein induces oxidative stress because of loss of glutathione activity (GSH) due to alkyaltion reactions at various nucleophilic sites in a cell particularly in the nucleus when exist in higher concentration. At low doses acrolein inhibits cell proliferation without causing cell-death and may enhance apoptosis from secondary toxins. Alternately, in -vitro study indicates that the direct alkylation of DNA by acrolein at low doses seems to be insignificant in human lung adenocarcinoma cells [14,15,16]. Large number of genes and its transcription factors (protein) have been identified to affect cell – division and apoptosis [17]. The exact mechanism of acrolein mediated cellular, specific point of chromosomal breaks and exchanges has been poorly defined in literature. It has also been observed in patient of diabetic, nephropathy and Alzheimer’s disease with increase lipid peroxidation [18,19].However, the mechanism of action of acrolein has not been known satisfactorily whether acrolein itself or its metabolites are responsible for germ – cell mediated toxicity with special reference to mature female gonads, although it induces spectrum of malformations in rat [20]. Hence, the interest has been generated several folds to monitor the influence of acrolein on ovary with or without use of antioxidant on gonadal dysfunction using rat as a putative animal model.

Acrolein was purchase from E. Merck (Germany). Female C.F strain of albino rats (n=30) of approximately 200-250 gms were obtained from central animal house of Institute of Medical Sciences, BHU, used both for experimental as well as control groups in present study. Food and water were provided ad libitum and animals were maintained on a 12L: 10D cycle. The animals were divided into three groups and each group contain ten rats:- Group-I acts as controls, Group-II: Experimental group includes where acrolein was administered 5 ugm/day (i.p.) for 10 days continuously, while Group-III where animals received both acrolein and antioxidant using ascrobat (5gm/kg body wt/day.). At the end of the day, the half of the animals (n=5) were sacrificed for histological and cytogenetic study while half of the animals (n=5) were used to evaluate the reproductive performance of the females using serial matting experiment between normal healthy male rats of the same strain and compared with controls.

For histological studies ovaries were removed; washed and separate (right and left) weight was taken from all experimental groups along with controls. Tissues were fixed in 10% formalin and stained with H/E staining using routine procedure. Every alternative section of 6μm were taken into account for microscopic examination such as morphological features and diameter of the follicles using micrometer disc fitted in objective of the microscope which contains 100 equally spaced division, marked 0-10. One division of the stage micrometer equals to 10 micrometer or 0.01 micrometer.

The cytogenetics studies were carried out using bone – marrow cells collected from the same experimental and controls groups by the procedure of Saxena (21) for direct preparation of chromosomal analysis from each data point. For scoring of chromosomal aberrations, well spread metaphase plates were selected for chromosomal studies after using 5% Gimsa as stain reagent.

Chi Square test was used to observed the significant differences (P – value) between experimental and control groups by the method of Snedecor and Cochran [22].

The morphological (qualitative) discrepancies were observed such as significant reduction of the size of the follicles after continous low doses exposure of acrolein up to ten days to the female rats, interestingly in one case “unilateral hypertrophy” of ovary on left side was seen while on other side normal in appearance in experimental groups of the same animal when compare with controls as shown in Fig.1A and B. Although, morphologically, ovary appears an almond-shaped, containing a rich vascular bed within a cellular loose connective tissue as seen in control groups. 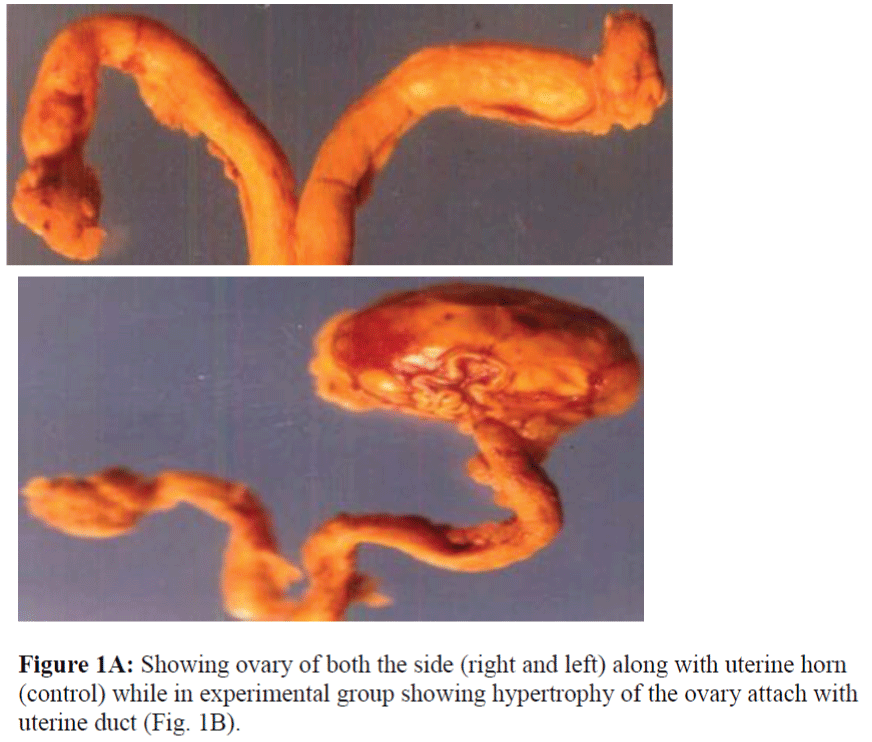 Figure 1A: Showing ovary of both the side (right and left) along with uterine horn (control) while in experimental group showing hypertrophy of the ovary attach with uterine duct (Fig. 1B).

Table 1 shows the weight of the right and left ovaries in both experimental groups were observed and compared with control group which revealed significance differences may be because of cytotoxic nature of the acrolein In histological finding using routine H&E staining of the ovarian sections (T.S.) reveals well defined population of germ cells (follicles) at various stages of development are embedded in stroma region of the ovary with loose connective tissue, while numerous primary follicles appear in the cortical region as seen in control group (Fig.2A). The mature follicle (Graafian follicle) is appears with large cavity full of acidophilic fluid although, intermediate follicles (secondary) are also visible in deep part of the cortex region separated by surrounding ovarian stroma. In experimental groups the ovarian tissue shows complete disappearance of germ cell population in cortical and medullary region when compare with controls (Fig. 2B) due to cytotoxic nature of the acrolein which inhibit DNA as well as protein synthesis [23]. The size of the proliferating germ cells (primary, secondary and graafian follicles ) were also effected in experimental groups, although significance difference (p<0.001) were observed because of either the metabolization of acrolein into various metabolites or due to low dose effect in the mature gonads (Table-2). Interestingly, the size of the mature follicle increased where the antioxidant were administered suggesting ascorbate either detoxifying the effect of acrolein or help for regeneration of proliferating germ cells in female gonads. In another set of experimental group (only acrolein administered) which shows significant differences in term of chromosome aberrations including chromosome break (both chromosome and chromatid type), gap and fragmentation are the significant finding were observed although similar findings of chromosome alterations were also observed by the same authors Saxena and Singh [24] using cyclophosphamide administration in-vivo. The frequencies of chromosomal aberrations like break/gaps and exchanges were significantly decreased where ascorbate was used as an antioxidant suggesting ascorbate prevent genetic damage. The distribution of breaks and exchange points along the chromosome strongly indicate that heterochromatic areas are not the site of preferential “attack” by the chemical (acrolein). Drug likes cyclophosphamide or its active metabolite- acrolein, does bind to purines and heterochromatic regions have been suggested to be rich in guanine-cytosine content, it does not mean that the chromosome-breaking action of such chemicals is through their influence in guanine-cytosine rich regions. Acrolein is negative regulators of the cell-cycle and p53 gene product and expression, while arresting cell-division for rapidly dividing cells (primary and secondary follicles) of the ovary in either G1 or G2 phases of the cell – cycle probably due to mutagenic nature [25].

Table 1: Showing the weight of the right and left ovary in control and experimental groups. 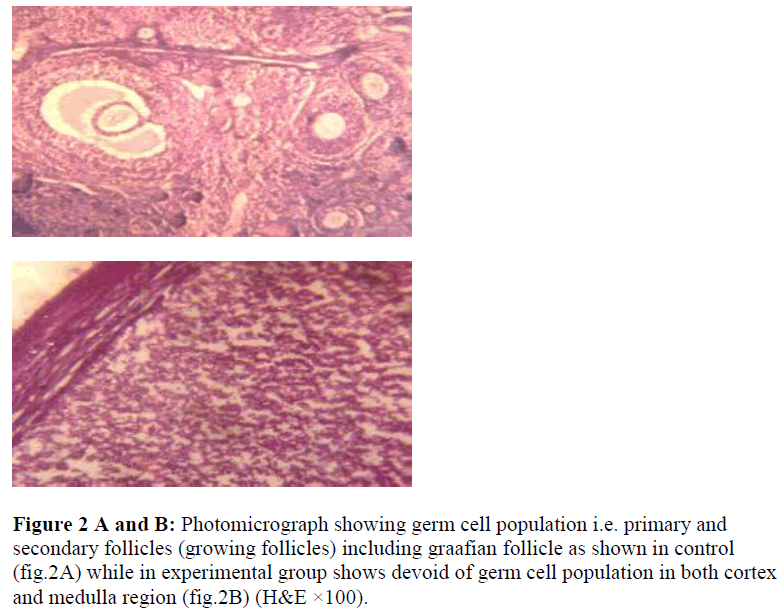 Table 2: Showing the size of the germ cell i.e. primary, secondary and graafian follicles in control and experimental groups.

In another set of experimental group where antioxidant (Ascorbic acid) was given along with acrolein shows very interesting findings i.e. regeneration of germ – cell proliferation was observed as shown in Fig. 3 result increase in population of germ cell. This may be either due to detoxification of acrolein by conjugation with glutathione (GSH) in the cell or due to low dose exposure of acrolein may cause inhibit of cell proliferation temporally as observed in the present study without causing cell- death. The cytotoxic nature is caused by alkylation reaction of the acrolein with DNA and protein inhibits cellular damage in cells [26], while high dose of acrolein induces oxidative stress either due to loss of glutathione (GSH) or due to alkyation reaction in a cell, particularly in nucleus. Present study suggests that ascorbate helps for the protection of damage germ cell by slowing oxidative process by scavengering ROS molecules that begin in the absence of adequate GSH during stress [27]. The reproductive performance shows 33% infertility when compare with control groups because of cytotoxic and mutagenic nature of the compound induces degeneration of growing follicles in mature female gonads.

Hence, the present study has been designed using rat as putative animal model not possible in case of human being to concluded with the remark that acrolein – an environmental pollutant – is highly toxic in nature which causes the following changes-1) degeneration of germ cells proliferation in rat ovary, 2) regeneration of germ cell population after use of antioxidant (ascorbic acid), 3) changes in chromosomal features in bone-marrow cells, and 4) alteration in reproductive performance.