Iron deficiency anemia (IDA) is one of the most serious forms of malnutrition. A promo-tion function of mineral absorption has been reported for neutral oligosaccharides, but not acidic xylooligosaccharide (U-XOS), which is a novel oligosaccharide. We hypothe-sized that U-XOS could promote recovery from IDA by enhancing the serum iron level. Therefore, the aim of this study was to investigate whether or not U-XOS was useful for recovery from IDA in the rat. Twenty-four female Sprague-Dawley rats were randomly divided into a control group fed a control diet (4.0 mg Fe /100 g) and an IDA model group created by employing a low-iron diet (0.4 mg Fe /100 g). The IDA group was further di-vided into three subgroups on day 21: U-XOS-supplemented diet (LI-X, 4.0 mg Fe /100 g), low-iron diet (LI), and control diet (LI-C) groups. No significant differences in the serum iron transferrin saturation levels were demonstrated between the control and LI-X groups on days 26 and 35. The divalent metal transporter 1 and ferroportin mRNA expression levels shown in the first segment of the small intestines showed a significant decrease in the LI-X group, compared with the LI group. A significant decrease in the hepatic hep-cidin mRNA expression level and iron content was also demonstrated in the LI-X group, compared with the control group, but not compared with the LI group. These results sug-gested that U-XOS could promote recovery from IDA by enhancing serum iron at an early stage of the recovery process.

It is well known that iron deficiency anemia (IDA) is one of the most serious forms of malnutrition. According to the World Health Organization, it is estimated that more than 1.6 billion people are suffering from anemia, and approximately half of these people have IDA [1], showing that IDA has been increasing worldwide.

In order to achieve any improvement in subjects with IDA, dietary management is most important in order to increase the dietary iron intake. However, there are three major factors that affect iron absorption. The first factor is the form of dietary iron. Most dietary iron is in the form of Fe3+, and is usually reduced to Fe2+ by the Fe-reduction factor and imported into the mucosal cells by the divalent metal transporter 1 (DMT1), which is one of the iron transporters in the small intestines [2]. The second factor is the storage iron in the body. If serum iron levels and iron stores are decreased, secretion of the hepcidin from the liver decreases, and then the expression of iron trans-porter ferroportin, which exports Fe2+ from cells on the basolateral membrane, increases. As a result, the amount of iron absorption increases [3-6]. The third factor is the consumption of dietary components. Several food factors have been demonstrated to enhance iron absorption, for example, ascorbic acid [7-9], cysteine-containing peptides [10-12], phosphopeptide [13-15], sugar alcohol [16,17], polysaccharides [18,19], and so on. However, relatively little attention has been paid to the effects of the food ma-trix on iron absorption.

Therefore, we hypothesized that U-XOS could promote recovery from IDA by enhancing the serum iron level. Accordingly, the aim of this study was to investigate whether or not U-XOS was useful for recovery from IDA in the rat.

The structure of U-XOS is shown in Figure 1. U-XOS contains one or more 4-O-methyl glucuronic acids as side chains and it is a xylo-oligomer with an average of 10 polymerization units. U-XOS is prepared from hardwood kraft pulp, such as eucalyptus, according to the method described by Izumi et al. [29]. The U-XOS employed in this study was kindly donated by Oji Paper (Tokyo, Ja-pan). The composition of U-XOS was shown in Table 1 [26]. 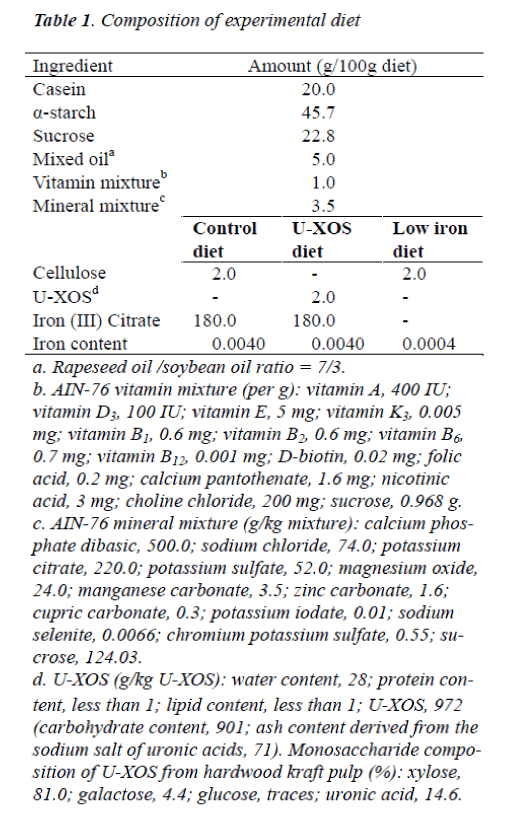 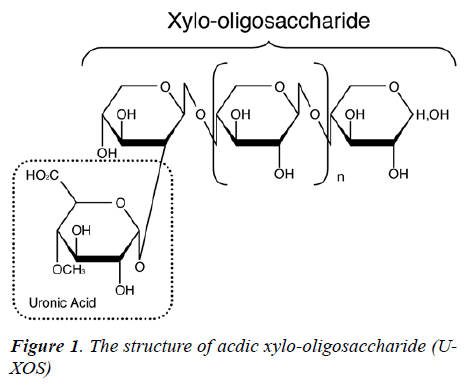 This study was conducted in accordance with the guide-lines for animal experimentation published by Kyoto Pre-fectural University. Twenty-four female Sprague-Dawley rats aged 4 weeks (Japan SLC, Hamamatsu, Japan) were employed in the study. The rats were individually housed in stainless steel cages at a controlled temperature of 22 – 24°C, a relative humidity of 40 – 60%, and a light cycle of 12 hours with free access to distilled water (the iron content of the distilled water had been measured). The composition of the diets used in the experiment was as shown in Table 1. The rats were randomly divided into two groups. For the first group (C group, n = 6, weighing 106 – 112 g), a control diet was supplied for 35 days. The second group (base LI group, n = 18, weighing 94 – 121 g), fed a low-iron diet for 21 days, was employed to cre-ate IDA rats. IDA rats were then divided three subgroups on the basis of weight and hemoglobin concentration. Each subgroup was fed either a low-iron (LI) diet (LI group, n = 6, weighing 155 – 195 g), a U-XOS–supplemented diet (LI-X group, n = 6, weighing 153 – 177 g), or the control diet (LI-C group, n = 6, weighing 163 – 182 g) for another 14 days. The LI-C and LI-X groups were provided with the diet on the following day, with the same amount of diet freely provided to the LI group during the pair-feeding period. All diets were pre-pared according to the AIN-76 formulation with one modification (addition of choline chloride). The LI diet contained 0.4 mg Fe /100 g without any ferrous citrate in the mineral mixture: U-XOS was added to 2% of the whole diet by substituting for cellulose. Blood samples, all 280 μL, were drawn from the tail vein of all of the animals every 4 days during the last 14 days of the study. Body weight and food intake were recorded at the same time everyday. The rats were euthanized during the early phase of the light cycle in a non-fasting state, by cervical dislocation under ether anesthesia, and blood samples drawn from the inferior vena cava were collected in tubes with heparin. Samples of the liver and the small intestinal mucosa (upper side, 1/4th) were also collected.

All liver samples were perfused with saline, and weighed (0.5g), and treated by the wet-ash method using a micro-wave extraction system (Ethos-1000, Milestone, Italy). The samples were diluted to 10 mL with 0.5% hydrochlo-ric acid solution after evaporation to dryness. After suit-able dilution, iron concentrations of the samples were measured by flame Zeeman-effect atomic absorption spectrometry (Z-6100, Hitachi, Tokyo, Japan) using a standard solution (Wako Pure Chemical Industries, Osaka, Japan). We determined that the coefficient of variation was 0.04. Iron concentrations were expressed on a wet-weight basis.

Data (C, LI, LI-X and LI-C group, n = 6; base LI group, n = 18) were presented as means ± standard error (SEM). Before assessing the different variables, we carried out a Bartlett test to check the normal distribution of the vari-ables. Data that fit the normal distribution were compared by 1-way analysis of variance (ANOVA) followed by the Tukey-Kramer test (Figs. 2 – 4; all parameters on day 35, Table 2), or Student’s t test (all parameters on day 21, Ta-ble 2). The level of significance was set at P < 0.05.

Table 2: Body weight gain, food intake and blood parameters on day 21 and day 35 after the start of study

Effect of U-XOS on recovery from IDA

Body weight gain, food intake and blood parameters on day 21 and day 35 after the start of study are shown in Table 2. No significant difference in body weight gain and food intake was observed between the two base groups on day 21 or among the four subgroups on day 35. On day 21, the hematocrit level and hemoglobin concentration of the base LI group (LI, LI-X and LI-C group) were lower than those of the C group, and the total iron binding capacity and unsaturated iron binding capacity of the base LI group increased compared with the C group, confirming that the LI group had developed IDA. On day 35, the he-matocrit level and the hemoglobin concentration of the LI-X group were higher than those of the LI group, but no significant difference was demonstrated between the C and LI-C groups, indicating that the LI-X and LI-C groups showed recovery from IDA. The total iron binding capacity of the LI-X group decreased remarkably com-pared with that of the LI group and increased compared with the C group, and both differences were statistically significant. The unsaturated iron binding capacity of LI-X group decreased significantly compared with the LI group and increased compared the C group, but no statistical difference was shown between the LI-X and C groups. 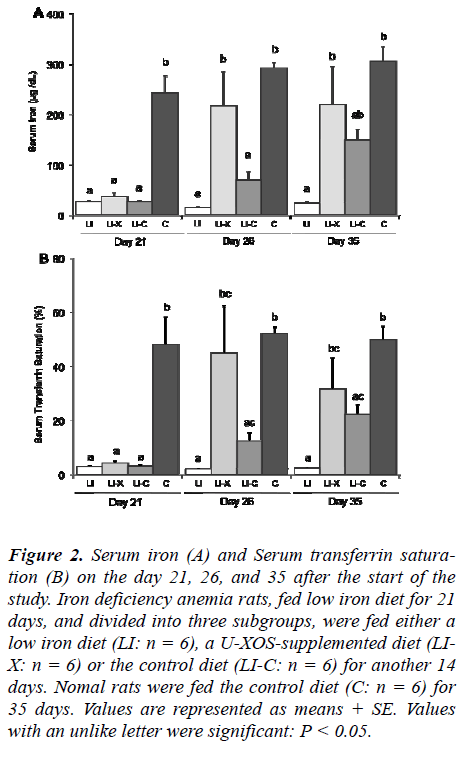 Figure 3: Iron transporter DMT1 (A) and Ferroportin (B) mRNA expression in the first segment of small intestines (upper side, 1/4th) on day 35 after the start of the study. Iron deficiency anemic rats, fed a low iron diet for 21 days, and divided into three subgroups, were fed either a low iron diet (LI: n = 6), a U-XOS-supplemented diet (LI-X: n = 6) or the control diet (LI-C: n = 6) for another 14 days. Nomal rats were fed the control diet (C: n = 6) for 35 days. Values are represented as means + SE. Values with an unlike letter were significant: P < 0.05 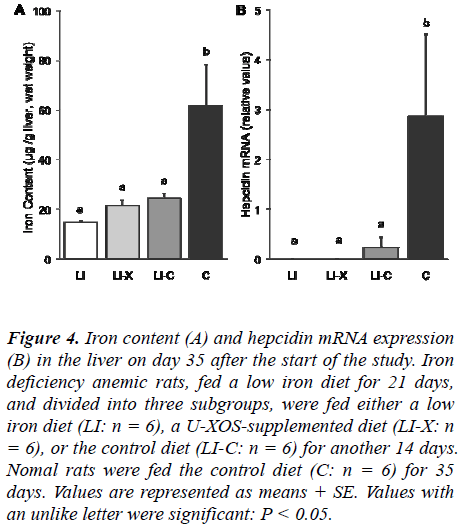 In the present study, we investigated whether or not U-XOS was useful in achieving recovery from IDA using a rat model. Our results demonstrated that U-XOS could promote recovery from IDA by enhancing serum iron and transferrin saturation levels at an early stage of the recov-ery process. It is necessary for dietary iron to be reduced from Fe3+ to Fe2+ ions [30,31]. Therefore, it appeared that soluble Fe2+ ions in the small intestines were increased in quantity by U-XOS. In regard to the mechanisms by which U-XOS dissolves and reduces dietary iron, this may be related to the intermolecular force between U-XOS molecules, which may vary according to the number of uronic acid groups per chain, or related to the average sugar unit of U-XOS.

On the other hand, it has been reported that DMT1 ex-pression is dramatically induced in IDA [32]. These find-ings suggested that the reason the DMT1 mRNA expres-sion level resulting from the ingestion of U-XOS showed no significant difference, compared with the normal con-trols, was because the DMT1 mRNA expression was regulated by recovery from IDA at the end of the experi-ment period. However, DMT1 mRNA expression might increase at the stage where there is an observed rise in the serum iron level due to U-XOS ingestion. On the other hand, the diet with no U-XOS showed that the capability to export iron ions from the epithelial cells by ferroportin was still active at the end of the experiment.

The limitations of the current study include the fact that we did not directly examine or measure the iron absorp-tion rate. In order to elucidate the effects of U-XOS on the promotion of iron absorption, further studies should be conducted to investigate the iron balance. In addition, the IDA rats did not show any recovery of storage iron, al-though they were administered a diet containing iron for 14 days. However, it should be possible to examine the effect on storage iron with a U-XOS diet by lengthening the experimental period. Furthermore, from the viewpoint of preventing IDA, we should also examine the efficacy of U-XOS in regard to the difference in the amount of iron intake. Moreover, another limitation of this study was that we did not assay the short chain fatty acids and the organic acid levels. Indigestible oligosaccharides such as U-XOS reach the large intestine without undergoing en-zymatic degradation, are fermented by intestinal bacteria [35], and produce the short chain fatty acid and the or-ganic acid [36]. It has been suggested that the bacterial generation of short-chain fatty acids from oligosaccha-rides increases iron bioavailability [22,37]. U-XOS is also a prebiotic [28,38]. Therefore, one of the items on our agenda for future studies is to investigate the in-volvement of U-XOS in iron bioavailability.

In conclusion, we demonstrated that U-XOS could be employed to promote recovery from anemia by rapidly increasing the serum iron and transferrin saturation levels. The use of U-XOS is likely to provide important clues for dietetic treatment, in combination with dietary carbohy-drates, which will be useful for promoting recovery from IDA.