Road traffic accidents have been recognized as one of those adverse elements which contribute to the suffocation of economic growth in the developing countries, due to the heavy loss related to them, hence causing social and economic concern. Traffic safety is an important key and plays an integral role in sustainable transportation development areas. Now days, the main negative impact of modern road transportation systems are loss of property injuries and deaths in road accidents. The success of traffic safety and highway improvement programs hinges on the analysis of accurate and reliable traffic accident data. This study analysis the present state of traffic accident information on three highway namely NH 47 Gandhipuram to Avinashi, NH-209 from Gandhipuram to Annur and NH 67 Gandipuram to Mettupalayam, Coimbatore District. It also discusses the Identification of high accident rate locations suggested using an ArcGIS Software and safety deficient areas on the highways. As the remedial measures are implemented in those accidental locations (Black Spots) the incidents of accident may be reduced.

Methodologies for predicting accidents have been widely studied in the past. The prediction models are mostly causative types in which the number of accidents is taken as a function of number of independent variables. Recently there have been studies to identify accident-prone locations using fuzzy and neural network classifier approaches. However such methods are highly dependent on traffic flow data like Average Daily Traffic and the data collected by the traffic police from the accident sites. But traffic flow data are rarely available in sufficient quantity or accuracy to justify these regression approaches. Moreover the traffic police may not be able to collect all the necessary data required to carry out the analysis using that data. Considering all the factors mentioned above, it is necessary to develop a model which can assist in predicting Risk zone on a given road network. This paper describes a model developed to identify black spots on roads using Kernel and Overlay analysis in GIS. GIS is location based information to analyze the spatial and non-spatial data. Hence a model for identifying accident spot location on roads can be easily integrated using GIS [1-6]. 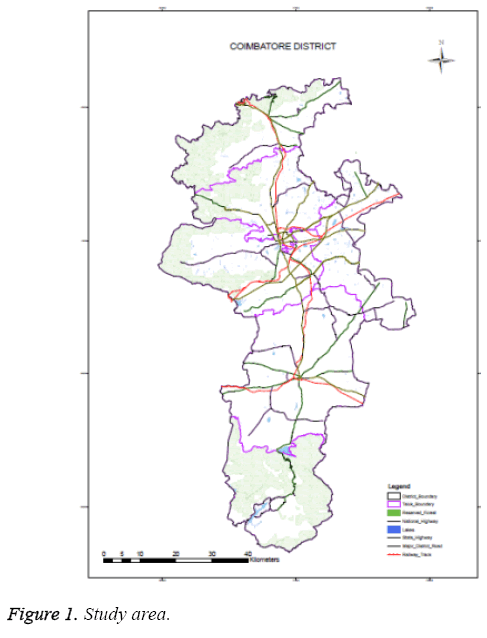 Coimbatore Corporation has eight blocks, One Corporation, 228 Village Panchayast, 44 Town Panchayats and 6 Municipalities. The percentage of population in Coimbatore is 89.23. The population density is higher in urban and semi urban areas when compared to the rural areas i.e Village Panchayats. There are four National Highways which connect three states (Tamil Nadu, Kerala, Karnataka). NH roads are designed for the people to pass through the city which results in heavy traffic congestion.

The step by step procedure is explained below

To determine the accident prone zones and traffic congestion, data are collected from respective departments. Data are classified into two i.e. spatial and non-spatial data.

The available information about spatial data is called non- Spatial data. The accident details include date of accident, Time, Type of Accidents, Vehicles involved, Gender, Licensed or Non Licensed, Drunk and drive etc. These details were collected from commissionarate of police, Coimbatore. The bus stop details such as bus route and Number were obtained from Coimbatore transport Corporation. The Hospital Information was gathered from the Coimbatore Health Department.

The Ground Control Points (GCP) were collected with the help of hand held GPS in WGS1984 datum. The accident spot locations are converted into shape files using ArcGIS software. The accident details were added as attribute data. The OS maps were geo-referenced using the given location. All OSM maps were mosaic into a single map. The updated taluk and road network map were geo-referenced using the geo-referenced OSM to identify the current taluk and Road Network. Digitized method is used to extract the vector data from the base raster data. The extracted layers are district boundary, taluk boundary, National Highways, State Highways, Major District Roads, Railway line, Reserved forest and lakes. These layers were saved as shape files. These extracted and generated layers are added into the geo database.

The accident spots are visualized by overlaying the accident location with the National Highway road. Figure 2 shows the various Types of Accidents Involved (safe, injured and death) with respective to years. 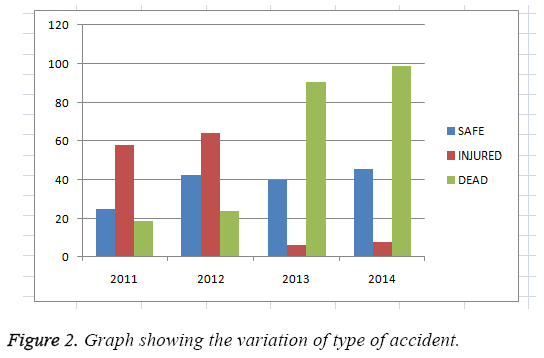 Figure 2: Graph showing the variation of type of accident. 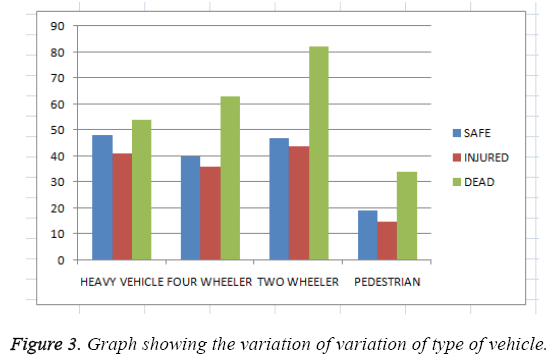 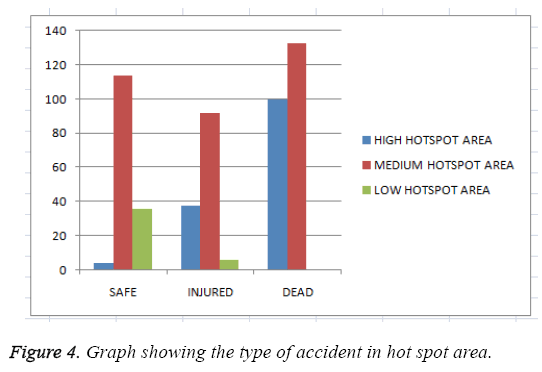 Kernel density analysis is used to find the accident probability zone by using accident hot spot information. The probability zones are classified into High, Medium, and Low. It displays the dangerous zone in red Colour (Figures 5 and 6). 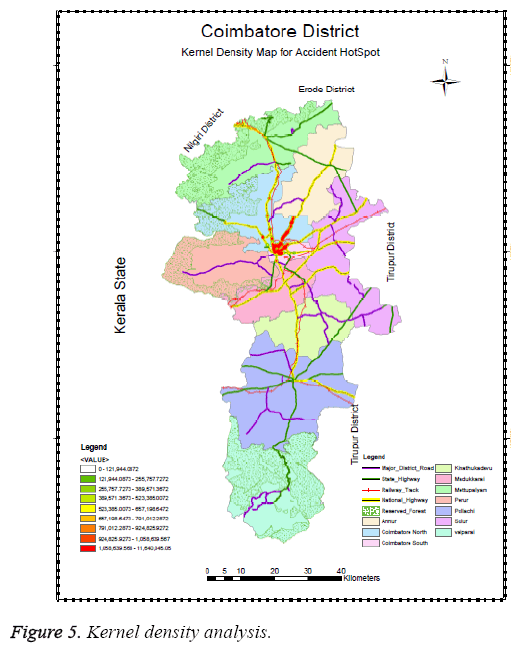 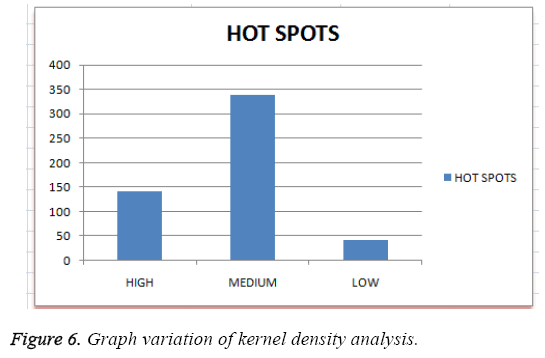 Analysis was also made to determine the accident spots that come under the jurisdiction of a particular police station.

Overlay analysis is a group of methodologies applied in optimal site selection or suitability modelling. It is a technique for applying a common scale of values to diverse and dissimilar inputs to create an integrated analysis.

1. Increase the number of lanes from two lanes to four lanes.

2. Provide footpath on both the sides of the road for the safety of pedestrians.

4. Provide separate bus bays for avoiding delay of other vehicles at the bus stops.

5. Take suitable enforcement measures to reduce the speed of vehicles.

6. Remove or repair potholes for the safety of road users.

7. Reduce number of U-turning and provide adequate length and width for median openings.

The following information is hosted in the web for the future updation and to act as user friendly to the public users. The link is www.aiscbe.in

The study was an attempt to find out the most vulnerable accident locations or the black spots in Coimbatore districts making use of GIS. The Weighted Overlay Analysis method was used to rank the accident locations. Based on the analysis, Periyanayakampalayam, Sarcarsamakulam, Thondamuthur, Madukkari and sulur were identified as most vulnerable accident locations and suggested some possible alternative or corrective measures to improve the transportation system in these locations, from which the decision maker can select suitable measure for the location. The method is found to be effective in identifying the black spots, provided sufficient secondary data is available.