Objective: The epidemiological data from a given location are useful for antimicrobial therapy. This study was carried out to find new insight regarding the prevalence of drug resistance among pathogenic bacteria from Western region of Saudi Arabia.

Methods: The antimicrobial resistance profiles were investigated in bacteria from various specimens like blood, skin, wound, stool, urine, and respiratory tract. In vitro susceptibilities were determined by VITEK 2 system using AST-GN69 and AST-GP67 cards for Gram-negative bacteria and Gram-positive respectively.

Conclusion: The study provides the information regarding the drug resistance patterns in Escherichia coli, Klebsiella and other bacterial pathogens from Western Region of Saudi Arabia. The study is significant in terms of prevalence of ESBL positive and methicillin resistant S. aureus (MRSA) isolates in the western region of Saudi Arabia.

The growing incidence of antimicrobial resistance is the key concern globally and it is considered as one of the main hurdle in the treatment of patients suffering from bacterial infections. It is estimated that around 1.3 to 2 fold rise in mortality caused by antimicrobial resistant bacteria compared with susceptible infections [1,2]. Antimicrobial resistance is described as a condition in which microorganism such as bacteria escape the stress of the antibiotic exposure [3]. The indiscriminate use of antibiotics by clinicians has made a great cause in the emergence of Multi Drug Resistance (MDR) bacteria, which occurs when a bacterium carries multiple resistance genes simultaneously. The appearance of MDR bacteria in recent years has also resulted in increased morbidity and mortality due to infectious diseases [4]. The pandemic spread of MDR bacteria has posed a great amount of burden to the society as many more healthcare systems and new setup are required to monitor and control the infectious diseases.

The bacterial infections are mostly treated by β-lactam antimicrobial drugs all over the world. The β-lactamases and Extended Spectrum β-Lactamases (ESBLs) are the bacterial enzymes that hydrolyze β-lactam ring of the drugs, is the primary mechanism, which provides resistance to a bacterium against β-lactam antibiotics [5]. The morbidity and mortality associated with the emergence of methicillin-resistant S. aureus (MRSA) has increased drastically around the world, and hence, the management of such infections imposes high and significant amount of burden on healthcare resources [6,7]. MRSA isolates have been reported to become resistant to several other antimicrobials simultaneously [8]. Notably, there are only few studies available regarding the prevalence of MRSA and ESBL producing strains in Saudi Arabia [9-12].

Bacterial isolates both Gram-positive and Gram-negative, were collected from three different types of specimens like urinary and respiratory sources and miscellaneous specimens, which include skin wounds, blood, stool, and catheters. All samples were collected from patients visiting King Abdulaziz University Hospital, Jeddah, Saudi Arabia using standard laboratory procedures between September 2013 and May 2014. The study was approved by the Research Ethics Committee of the Faculty of Medicine, King Abdulaziz University, Jeddah, Saudi Arabia.

Table 2. Resistance profile of bacterial isolates against number of antimicrobials. 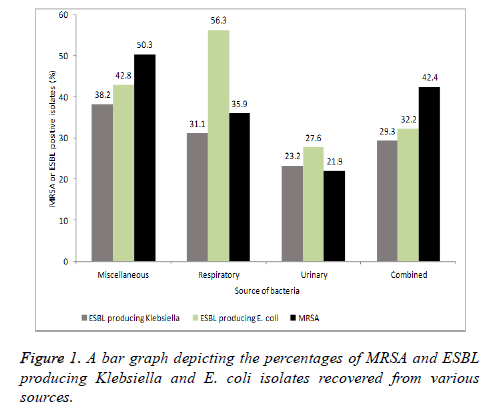 The study has provided us the information about the antimicrobial susceptibility patterns in Escherichia coli, Klebsiella and other bacterial pathogens recovered from Western Region of Saudi Arabia. The study has also provided information regarding the prevalence of ESBL production and MRSA isolates in the region. The present surveillance data and antimicrobials resistance profiles of different groups of bacteria will be helpful to microbiologists and clinicians in recommending the best possible antimicrobial drugs based on the resistance pattern for the treatment of various infections in Western Region of Saudi Arabia. There is a need to check the spread of antimicrobial resistance in pathogenic bacteria, which can be achieved through judicious use of antimicrobial agents. Further, surveillance studies must be continued to determine the actual pattern of the bacterial resistance to different antimicrobial drugs.

This work was supported by Deanship of Scientific Research (DSR), King Abdulaziz University, Jeddah, under grant No (141-798-D1435). The authors, therefore, gratefully acknowledge the DSR technical and financial support.