Surgical site infection (SSI) is one of the most common infections in the health care settings with high financial burden and mortality rate.112 patients with infection of SSI were identified. 40 patients without SSI served as control group. Diabetes status, History of smoking, alcohol, other therapy before surgery is the main factors for potential risk of acquiring SSI. The SSI was studied from the day patient underwent surgery. Out of 88 patients (47 male and 41 female) with mean, age 45 ± 2.5 years. 42 (47.7%) patients had SSI at early stage and 46 (52.3 %) at later stage with mean duration of the hospital stay 287 ± 57 days. Among 40 controls, group (24 male and 16 female) with mean age 51 ± 4.5 years. Only 18 (45%) developed SSI. Microbiological profile of the SSI also studied both in study and control group patients. 18 (20.5%) patients implants were removed. 20 (47.6%) patients received β- lactam drugs. 24 (52.2%) patients underwent debridement. 12 (26.1%) received suppression therapy with antibiotics. In control group patients 5 (27.8%) patients implants removed. 6 (54.5%) patients received antibiotic therapy with Amikacin and cefozolin. 5 (27.3%) patients underwent surgical debridement. Control of diabetic status and reducing hospital stay before and after surgery with higher antibiotic prophylaxis can lead to decreased SSI, which in turn will reduce the financial burden of the patients after surgery.

Surgical site infection (SSI) is one of the most common infections in the health care settings. The prevalence of SSI ranges from 0-17 % [1-3]. The SSI rate after spinal surgery is >10%. In spinal surgery the risk and complication post-surgery are high mainly due to long-term hospital stay, which sometimes leads to HAI, prolonged antibiotic therapy, sepsis etc. The cost for care post-surgery is very high especially when SSI is acquired and leads to increased mortality rate [4].

The risk factors for acquisition of SSI are mainly due to implants used during surgery. Other risk factors are smoking, addiction to alcohol, elderly age group people, history of diabetes mellitus etc [5-12]. Awareness about risk factors helps in modification in preoperative and postoperative procedures. Spinal surgeries carry increased risk of infection than in orthopaedic procedures [13]. The higher incidences of infections are mainly due to complicated procedures and prolonged operation time involved in the spinal surgery [14,15].

SSI is not only the commonest complication post-surgery but has 8-23% of complication which consumes money, time, resources and has considerable strain on the morbidity and mortality of the patients [16,17]. The host factors are also one of the factor which increases susceptibility to infection favoring the environment for the pathogen to multiply such has the wards air in the theatre, Instruments used for surgery, Antibiotics all these has influence on SSI [18,19].

The orthopaedic implants used in bone and joint surgery especially in spinal surgery. The infections of the implants are mainly due to the adhesion of bacteria subsequently leading to biofilm formation [20,21].

The intra and extra operative environments are the main source for occurrence of SSI. Hence, management and prevention of SSI is important. By preventing the interventions patients overall outcome can be improved their by decreasing the time of hospital stay, increasing recovery time and reducing the cost of hospital stay.

This study was conducted in tertiary care Chinese hospital, china between 2014 Feb- 2015 October. The inclusion criteria for the patients in study group were patients under went spinal surgery with implants, use of instrumentation procedures were included. Patients without instrumentation procedures were excluded from the study. Patients with no implants but underwent surgery was also excluded from the study. Our control group patients consists of patients who underwent surgery other than spinal surgery were included.

The demographic details of the patients were collected from hospital record. Infection control officers based on CDC and prevention/National nosocomial infection surveillance definition of SSI identified all SSI’s. Total of 112 patients with infection of SSI were identified in which 24 of the patients were excluded because they had previous history of SSI or undergoing treatment for SSI. 40 patients without SSI were selected for control group with same inclusion criteria has that of study group. The study was approved by institutional ethical board.

Many factors contribute risk of acquiring SSI. Among which age is the main factors followed by BMI of the patients. Diabetes status, history of smoking, alcohol and other therapies before surgery are the main factors for potential risk of acquiring SSI. Other factors include the antiseptics used for disinfecting skin, use of antibiotics before and after surgery, operating procedures etc. are the source for infection. The patients were given prophylactic antibiotics either in combination or alone with any cephalosporin with amino glycoside. The SSI was studied from the day patient underwent surgery and factors unavoidable in acquiring SSI and leading to the readmission/repeated surgery for SSI were monitored in our study.

Table 2: Microbiological profile of the patients with SSI in study group. 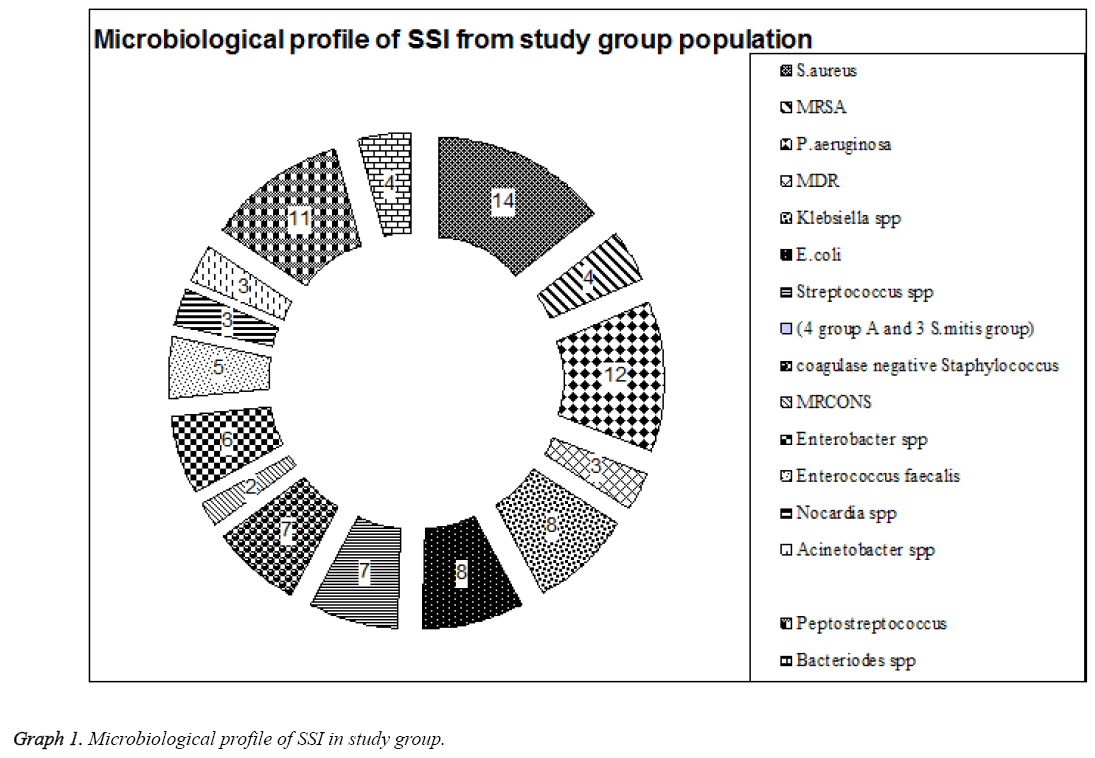 Table 3: Microbiological profile of the patients with SSI in Control group. 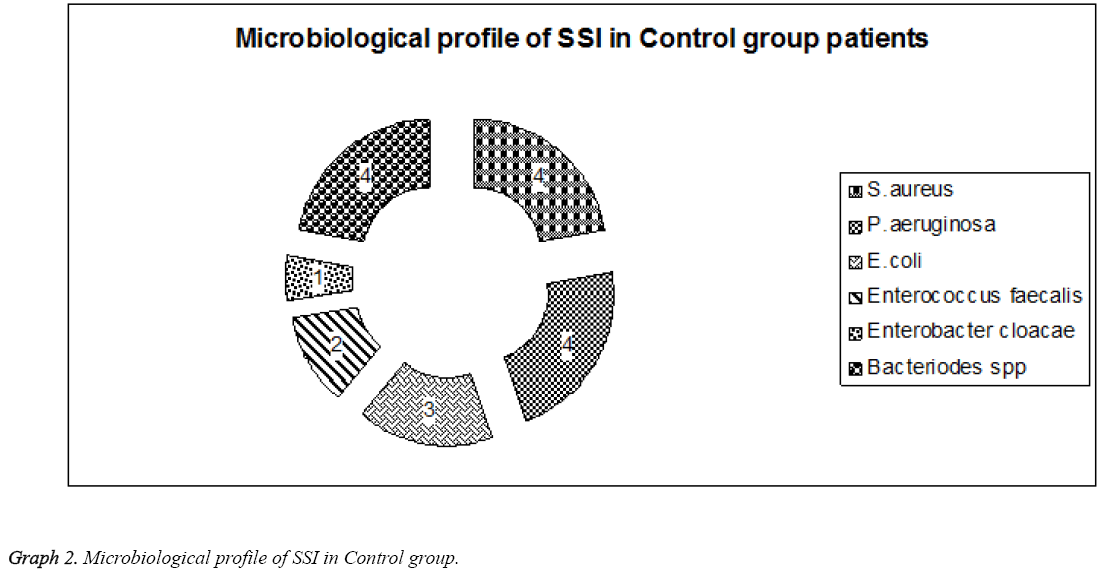 Both in study and control group patients the wound were seen in between organs space mostly or in the incisional areas and were implants were lodged. All the case of SSI documented pain with fever. The Median time of onset of SSI was 12 ± 35 days. 22 underwent repeat surgery either to remove implants with adhesion to clear the infection or to drain the pus from the infected site. When the risk factor smoking and diabetes were compared as a chance for acquiring SSI, it showed significance in univariate analysis. Transfusion showed no significant association with SSI with P>0.14.

Obesity and diabetes showed P<0.005 when smoking, diabetes, obesity were compared as a source of SSI with multivariate logistic regression showed positive value of significance.

Management of SSI with prophylaxis

Table 4: Methods used in our study for management of SSI.

Out of 40 control group patients 11 (27.5%) developed SSI at early stage. 2 (18.2%) patients implants were removed and 6 (54.5%) patients were started with antibiotic therapy with Amikacin and cefozolin for 3 months minimum. 3(27.3%) patients underwent surgical debridement and supported with antibiotics tobramycin and β-lactam drugs (Table 4). 7 (17.5%) patients had late acquisition of SSI in which 2 (28.6%) underwent debridement, 3 (42.9%) patients implants were removed due to adhesion of bacteria producing biofilm and 2 (28.6%) received combination therapy with tobramycin and β- lactam drugs (Table 4).

In our study, we studied on various factors associated with risk of acquiring SSI post-surgery. Our study helps the health care professionals to plan and implement various measures for control and management of infections especially post-surgery. In our study the mean age of the patients in study group was 45 ± 2.5 years whereas in control group patients the mean age was 51 ± 4.5years which is concordant with the other studies which also show higher prevalence of SSI over age 48 years [22-24]. Age was one of the factors for SSI in our study [25-32]. Increased infection with increase in age is mainly due to decreased immunity [33]. When BMI of the patients was compared between study and control group patients. In study group patients 29 had >40 kg/m2 as BMI and in control group patients 8 had BMI >40 kg/m2 which is associated with risk of SSI [34-38].

The SSI was seen mostly inpatients who has prolonged hospital stay before surgery and after surgery has increased chance of acquiring infection along with colonization of resistant bacteria [39]. The patients who had implants placed in their spine had acquired more resistant infection due to adhesion of bacteria to implants leading to formation of biofilm on the surface [40]. Biofilm are the index of pathogenicity of the organisms.Biofilms are also known to correlate with the antimicrobial resistance (41). The most important factor contributing to virulence is Biofilm formation which is the initial step for colonization and adherence of the bacteria. Biofilms are the major concern in SSI infections which in turn leads to antibiotic resistance of the organisms complicating the treatment and increasing the duration of the hospital stay [42].

The post-operative incontinence seen in 11 patients in study population and 4 patients in control group patients showed contamination of the skin area [43] which is like previous studies which showed post-operative incontinence associated with risk of acquiring infection from skin area. Obesity also an important factor associated with SSI especially in spinal surgery many studies also had reported on the risk of SSI in spinal surgery [44,45]. Our study also had studied on the BMI factors as one of the main risk factors among SSI. In our study we have BMI >40 kg/m2 which is similar to other studies who had reported BMI of patients >35 to have higher risk of SSI [46].

To manage SSI in patients with higher BMI prophylactic antibiotics doses had to be increased. Other interventions such as contamination of the surgical site with faecal matters, Urine, and other skin flora since the patients are immovable most of the time after spinal surgery, which has to be emphasized especially in patients with increased chance of getting SSI.

The main reason for the lesser infection is mainly due to the use of prophylactic antibiotics before and after spinal surgery. However, older age, history of repeat spinal surgery or previous surgery is the main risk of SSI [44,45,47-49].

In our study only small patients population was studied also, we focused more on spinal surgery than on other orthopedic surgeries. To analyze the potential risk larger population that included all the major surgeries has to be included to get a clear picture on the SSI management.

Our study highlights most of the potential risk factors of SSI in spinal surgery which most of the studies have not focused. We have also studied on the association of risk factors with multivariate analysis on which only few reports are available.

To Conclude, in our study we have found that patients with >BMI, diabetic, Obesity, postoperative incontinence had increased risk of acquiring SSI. This has to be monitored by introducing specific interventions such as diet control of the patients with nutritious food. Control of diabetic status and reducing hospital stay before and after surgery with higher antibiotic prophylaxis can lead to decreased SSI, which in turn will reduce the financial burden of the patients after surgery.