Background: The purpose of this study is to investigate the effect of sounds control program on some physiological parameters of premature infants and on sounds intensity level of NICUs.

Methods: 20 premature infants at fetal age of 30-34 weeks and weight of 1000-2000 g were selected randomly. Before the intervention, blood oxygen saturation percentage, heart rate, respiration rate and their fluctuations were measured and recoded as well as the sounds intensity level at the infants care unit 3times a day (morning, afternoon and night) for one week. The intervention program was performed along the next week and all measurements were done at one, two and three weeks after the intervention. Data were analyzed by SPSS software after collection and multi sample repetitive scales variance test, post huck banferoni test and paired T test were performed.

Results: Sounds intensity average and its maximum and minimum, before the intervention at three shifts showed that they are all more than standard (45-50 db). There were no significant differences detected in blood O2 saturation percentage, and heart rate and their changes before and after the intervention but respiration rate and its changes were significantly decreased (p-value<0.05). By recognizing and control of sounds resources the total mean sounds intensity and total mean of maximum sounds intensity were decreased by 7.79 db and 13.07 db, respectively.

Conclusion: Sounds intensity at NICUs is more than standard level and this can have a relation with increased mortality of premature infants therefore it must be controlled and decreased.

The fetus can receive many sounds in the uterus. It records his/her mother's sounds and this is very effective on his/her speaking pattern development in future. The amniotic fluids protect the fetus against loud and sever sounds harms but after birth the infant is purely defenseless. Sounds intensity is much higher when passing through air than amniotic fluids and its harms on infant's auditory system and other physiologic parameters and his/her development is more adversely effective [1]. Anatomic and self-regulatory systems are weak in premature infants therefore they are more vulnerable to loud and sever sounds and this is related to their inability in filtering and decreasing the harmful stimulants [2]. The Auditory system is so much developed even in premature infants at 26-28 weeks that this loud sound can cause physiological alterations in their heart rate, blood pressure, respiration rate and O2 saturation percentage and therefore maintaining a stable physiological condition is very hard for them [1]. Regarding to Nagorski, sounds pollution can adversely affect the stability of infant's physiological signs, auditory system, neurological development, sleeping rhythm and [1] Infants hospitalized at NICUs are exposed to sounds louder than standard that can adversely affect their health especially their cardiovascular and respiratory systems even during a short period of time [2].

Other studies showed that adverse effects of loud sounds in NICUs can cause cardiovascular system stimulation, auditory decrease and weakness, increased gastric secretion, adrenal and hypophysial stimulation, immune response suppress against infection and female infertility [8]. Sounds intensity recommended by International Noise Council is 45 db during morning work shift, 40 db during afternoon and 20 db during night with the range of ± 3 db [9]. Sounds intensity level control in NICUs is one of the most important goals of AAP and suggests that sounds level at infants surrounding environment must be lower than 45 db and louder temporary sounds must not be higher than 65 db. It is proved that 20 db increase higher than the standard is equal to 10 times increase in the amount and intensity of sounds. 6 db increase will double the sounds intensity [10]. WHO expresses that sounds level increase during the night more than 30 db, will lead to neonatal sleeping disturbance, it is while the intensity of sounds is routinely more than this in hospitals [8].

Through 4 db of sounds intensity decrease, the need to respiratory support and mean diastolic pressure will effectively diminish [11]. Sounds decrease at NICUs is a vital requirement to the infant. Sounds confinement at these units and improving pre mature neonatal growth and health is an indicator of a country development level and it will cause effective costs decrease [12]. Therefore this study was performed in order to investigate the effect of sounds control program at NICUs on some physiological parameters of premature infants and on sounds intensity and level of these units in selected hospitals of Shiraz University of Medical Sciences.

This study is a clinical experimental interventional investigation performed on randomly selected 20 premature infants with pregnancy age of 30-34 weeks and weight of 2000-3000 grams without any pathological or organic problems, hospitalized at Hazrete Zeynab and Hafez Hospitals of Shiraz at 1392. At first for one week before and one, two and three weeks after the intervention, the physiological parameters of O2 saturation percentage, heart rate and respiration rate of the infants were measured daily at 3 work shifts of 10-11 morning, 19-20 afternoon and 23-24 night. Oxygen saturation percentages and heart rates were measured by Pulse Oxymeteric device and the respiration rates were measured through abdominal movements count per one minute. Fluctuations of these physiological parameters and the intensity and level of infants unit sounds were measured and recorded by an audiometric device named LT Lutron SL-4013 (made in Finland) once every 10 minutes during other measurements as well.

Hazrate Zeynab Hospital owns 3 NICUs which are placed by each other and each one is connected to the other by a door. NICU1 has 13 active beds, NICU2 has 30 and NICU3 has 11 active beds. Hafez Hospital has only one NICU. Performed sounds control program in these 4 units was as follows:

1. Education to all nursing personnel of NICUs (during a week, 3 one hour sessions, every other day) the classes consisted of booklet presentation, power points, face to face education, interaction with the staff and using their suggestions in order to control the sounds

2. Premature infants must be without any pathological or organic problems such as infections, respiratory distress, cranial hemorrhage,

3. The infant must not be intubated or under the ventilator device

4. Parents willing to participate in the study

3. Infant dismiss or death during study

Table 1. Sounds intensity mean (db) Comparisons before and after the intervention at 3 working shifts.

Table 2. Respiration rates mean comparisons before and after the intervention at 3 shifts.

Table 3. Respiration rate fluctuations mean comparison before and after the intervention at 3 shifts.

Also our results are confirmed by the results of Ramesh et al. in India. They investigated '' The effect and expenses of sounds decrease protocol performance on sounds intensity level at NICUs'' and the highest sound level was determined as 60 db. They could decrease it by 2.09 to 9.58 db at different places of NICUs [15]. At the study of Valizade et al. a study on the effect of sounds level decrease intervention on sounds level of Tabriz hospital NICU, The sound intensity decreased by 4 db significantly [16]. Other physiological parameter investigated in this study was the infant's blood oxygen saturation percentage (BOSP). The total average of BOSP at 3 shifts before the intervention was 94.97% ± 1.72% and at one week after the intervention reached to 95.77% ± 1.61% and at 3 weeks after the intervention reached to 95.81% ± 2.03%. Their differences before and after the intervention were not significant. 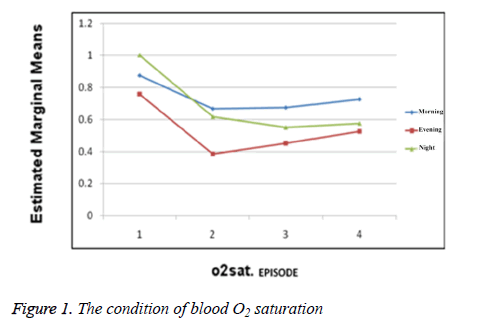 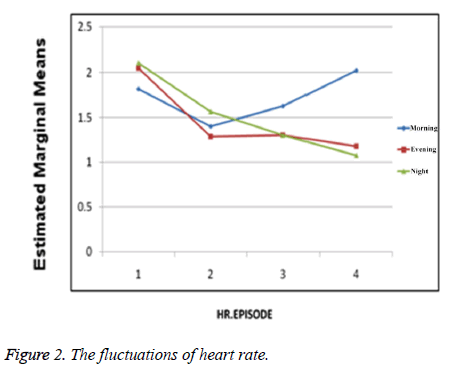 Figure 2. The fluctuations of heart rate.

Other physiological parameter investigated in this study was the infant's respiration rate. As mentioned before, sounds intensity decrease protocol was significantly effective on this parameter decrease. (P-value<0.05) This result is compatible with the results of Long et al. (1980). Their investigation was performed on 34-35 weeks premature infants and revealed that loud and sudden sounds can cause restlessness, crying, respiratory apnea and respiration rate increase [17]. In order to minimize the harmful effects of sounds pollution during the hospitalization period of premature infants at NICUs, one of important responsibilities of nurses is achieving and obeying the methods of sounds intensity control. Regarding to the results of this study based on positive effects of sounds control program, highest levels of international standards and sounds pollution adverse effects control suggested by AAP can be achieved. We hope that these results might expand the nursing activities field regarding to premature infants care and improve the quality of such cares.

Measurement of sounds intensity at Hospitals of Shiraz University of medical sciences showed that it is much higher than the standard level. Previous studies also had similar results, but in those investigations the sound meter device was placed at one or more certain cites, but in this study the device was portable and was ported by the investigator to places. The advantage of this method is that the sound heard by an individual infant besides the environment background sound (averagely) was calculated and compared by physiological signs of that one infant. A 3 db decrease in environmental sound can make its intensity half. In this study we could decrease the mean sound intensity to 7.79 db and mean total maximum sound intensity to 13.07 db and by this method we reached the AAP standard. Regarding to these results it can be said that sounds control can have positive effects on some physiological parameters such as respiration rate and quality, and our program is more effective because the equipments used in this study can encourage the personnel to consider the principles of sound control program permanently regarding to the education and the booklet that has been presented to them. By continuing investigations and performing more advanced methods in next studies we can hope that sounds adverse effects would decrease and we will have a healthier generation.

In this study blood O2 saturation percentage, heart rate and their fluctuations were also assayed and their differences before and after the intervention were not significant. Possibly it is because of partially stable condition of respiratory and cardiovascular systems of infants. Therefore it is recommended that future investigations would be performed on unstable and ill premature infants at equal conditions. Also the duration of measurements was short in this study (only 3 hours and shifts per day as a sample of 24 hours) and parameter recording consecutively during 24 hours was not possible because of equipments and personnel deficit. Therefore performing such investigations at more equipped centers and with more personnel during 24 hours measurements is recommended. Also such investigations must be performed on more sample populations (in this study 74 infants entered the study but 54 of them exited the study because of dismissing from the hospital and the researcher had to use 2 hospitals) and it is recommended that such investigations be performed on full term or lower than 30 weeks age infants.

We appreciate the Researches Chief Assistant of Shiraz University of Medical Sciences because of supervision, confirmation, verification and financial support and also appreciate The Center of Development and Clinical Researches of Namazi Hospital because of statistical support to the research team. This paper has been extracted from the thesis of Bahare Beh Amooz and its financial support is done by Shiraz University of Medical Sciences.