A study on some biochemical properties of active subfragment-1 (S1) prepared from actomyosin of air-breathing freshwater teleost, Channa gachua

We have successfully prepared active subfragment-1 (S1) of an air-breathing teleost Channa gachua by digesting natural actomyosin (NAM) with chymotrypsin, instead of using myosin as the primary source. Conditions of preparation of acto-S1 were worked out following SDS-PAGE profiles of degradation of 200 kD MyHC to 130 kD and 94 kD products, corresponding respectively to myosin rod and S1, up to 1 hr of incubation with chymotrypsin at 15°C. The observed cleavage was accompanied by 250% activation of NAM-Ca2+-ATPase during early 30 min of digestion. Actin from acto-S1 (prepared by chymotrypsin digestion of NAM) was dissociated by Mg2+-ATP and ammonium sulfate fractionation. S1 of C. gachua prepared by this protocol had a heavy chain of 94 kD and a light chain of 19 kD. It possessed satisfactory levels of Ca2+ and K+- ATPase and Ka for dissociation of actin. The two most remarkable biochemical characteristics were : activity maxima at neutral pH and the exceptional thermostability of Ca2+ -ATPase, being the highest of any fish S1 reported so far.

Biological motor of skeletal muscle is type-II myosin, which is a hexameric bifunctional molecule comprising of two identical heavy chains (MyHC) of ˜200 kD and a pair of light chains (LCs) with Mr in the range of 12-27 kD [1]. The two myosin functions of ATPase and actin-binding (located in the twin N-terminal heads of MyHC) and the solubility-determining α-helical rod can be isolated from each other by limited proteolysis with papain or chymotrypsin [2-3]. A large body of evidence exists that suggests that proteolytically generated active subfragment of vertebrate myosin S1 and rod have molecular weights of 94-96 kD and 130 kD, respectively [3-5]. Catalytic activity and actin-binding functions are associated with S1.

Whereas research on active proteolytic subfragments of vertebrate myosin has greatly helped to understand its structure and function, the established procedures of generating active subfragments by proteolysis cause overfragmentation of inherently unstable fish myosins [6-10]. As a result, only rare reports have so far appeared on preparation of S1 from fish myosin displaying appreciable biochemical properties [11,12]. We report here the isolation and partial characterization of S1 of an air-breathing fish Channa gachua by using actomyosin as the starting material. Generally, due attention has not been paid to muscle proteins of air-breathing teleosts, which represent specialized lineages in adaptive evolution. It may, however, be conceived that similar to other enzyme systems of specialized groups of teleosts [12], studies on structural proteins of muscle may generate new information. So far as we know, ours is the first report on biologically active S1 of an air-breathing teleost of tropical freshwaters.

Myofibrils prepared from dorso-lateral trunk muscle of Channa gachua (Bloch) were used as the starting material to extract actomyosin in 0.45 M KCl in 5 mM phosphate buffer for 4 h Actomyosin was precipitated from the viscous supernatant by dilution with 10 volumes of chilled distilled water and purified by repeated precipitation and dissolution in 0.6 M KCl containing 25 mM Tris-HCl buffer of pH 7.5. Solutions used during extraction and early rounds of precipitation contained 0.1 mM PMSF (phenyl-methyl sulfonyl fluoride) to limit proteolysis by naturally occurring proteases of the muscle.

Regulatory proteins from NAM were washed away by overnight gentle stirring of the precipitate in 5 mM Tris-HCl buffer of pH 7.9. After low speed centrifugation (4000xg), the supernatant was discarded and the pellet suspended in 5 mM phosphate buffer of pH 7.9. Actin was precipitated by adding 5 mM ATP and 10 mM MgCl2, essentially as described by Ebashi [13] and used for actin-binding experiment after exhaustive dialysis.

Protein concentration of NAM and actin was determined by the biuret method, while that of S1 on GENESYS 10UV spectrophotometer using the value E2801% = 7.7. Conditions of chymotryptic digestion are described in the legends of Fig. 1. 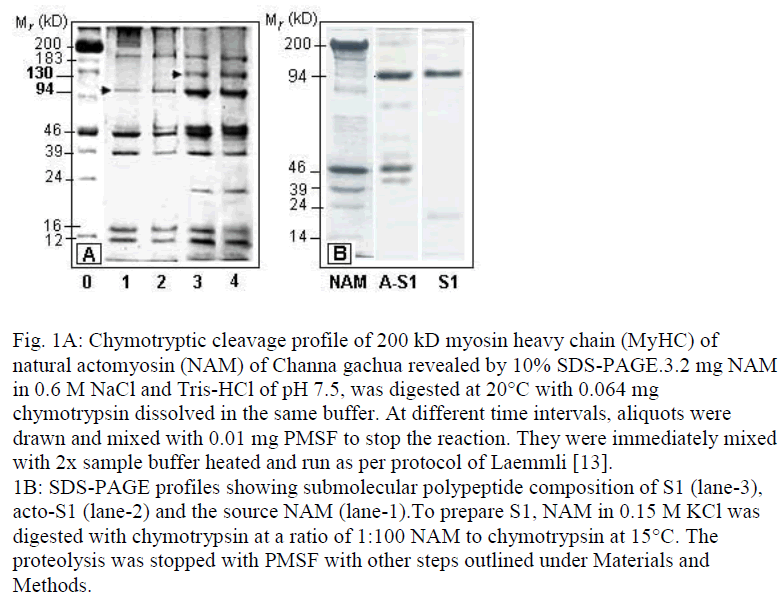 Figure 1: Chymotryptic cleavage profile of 200 kD myosin heavy chain (MyHC) of natural actomyosin (NAM) of Channa gachua revealed by 10% SDS-PAGE.3.2 mg NAM in 0.6 M NaCl and Tris-HCl of pH 7.5, was digested at 20°C with 0.064 mg chymotrypsin dissolved in the same buffer. At different time intervals, aliquots were drawn and mixed with 0.01 mg PMSF to stop the reaction. They were immediately mixed with 2x sample buffer heated and run as per protocol of Laemmli [13]. 1B: SDS-PAGE profiles showing submolecular polypeptide composition of S1 (lane-3), acto-S1 (lane-2) and the source NAM (lane-1).To prepare S1, NAM in 0.15 M KCl was digested with chymotrypsin at a ratio of 1:100 NAM to chymotrypsin at 15°C. The proteolysis was stopped with PMSF with other steps outlined under Materials and Methods.

SDS-polyacrylamide gel electrophoresis (SDS-PAGE) was carried out essentially as described by Laemmli [14]. Slab gels of 11×8cm were 10% in acrylamide and the glycerol. Protein bands were visualized by staining with coomassie brilliant blue.

Thermal inactivation was carried out at 30°C. Aliquots of S1 incubated for different time intervals up to 20 min were cooled down in ice bath and subjected to Ca2+-ATPase assay (details given in the legend of Fig. 2). Rate constant of ATPase inactivation (kD) was calculated using the formula: kD = (ln Co ln Ct )1/t, where Co and Ct are the ATPase activities before and after incubation time t, in seconds 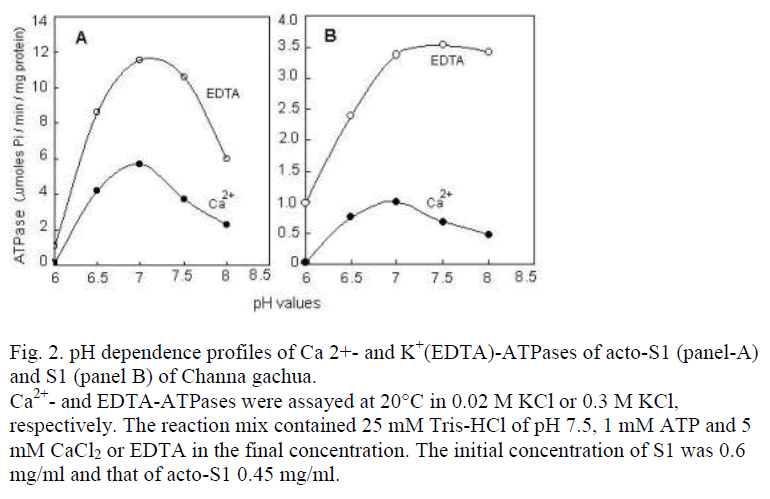 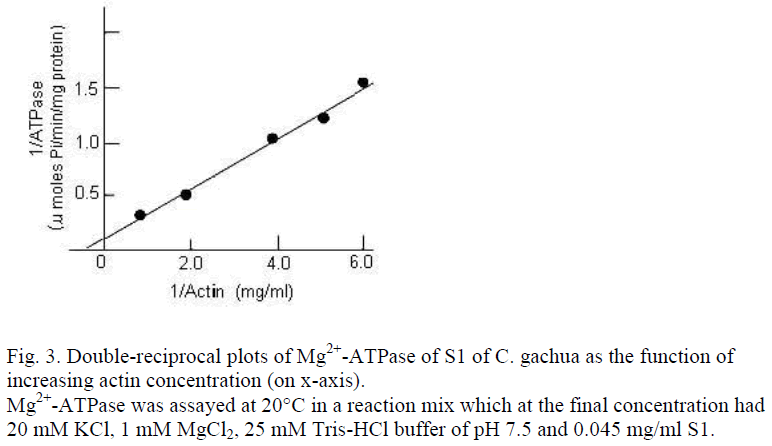 Cleavage of mainly the myosin heavy chain (MyHC) is displayed by SDS-PAGE profiles of skeletal muscle NAM of C. gachua at a ratio of 1:50 substrate to chy-motrypsin and incubation at 15°C (Fig. 1A). Bands of 130 and 94 kD gained prominence as 200 kD MyHC was gradually converted to low Mr fragments during 60 min of digestion at 15°C. To avoid fragments generated due to trypsin contamination, TLCK (N-tosyl-L-lysine chloro-methyl ketone)-treated chymotrypsin was used through-out. Apparently, due to high protease to substrate ratio, small polypeptides corresponding to LMM (˜70-80 kD) were further degraded or existed in small amounts. Some changes in the relative mobility or the thickening of lighter Mr components can also be observed, which indicates co-stacking of the fragments of identical Mr.

During the first 10 minutes of digestion, an activation of >250% in Ca2+ and ˜10% in K+(EDTA)-ATPase was recorded. Ca2-ATPase level remained above 100% even after 1 hr of continued proteolysis.

In view of the observations that chymotryptic digests of fish containing 0.01 mM PMSF display additional cleav-age in SDS-PA gels during processing and keeping, a ratio of 1:100 chymotrypsin to NAM in 0.15 M KCl was preferred to prepare S1. Duration of proteolysis at 15°C was also limited to 20 min. Reaction was stopped by adding 0.01 mg/ml PMSF and the digest was immediately loaded on to a 5 ml injection van 3/4th filled with Sephacryl-200 and equilibrated with 0.2 M KCl containing 25 mM Tris-HCl of pH 7.5. The same buffer was used for elution. The treatment removed small background peptides generated during chymotryptic hydrolysis. Actin from acto-S1 (main peak obtained from gel filtration) was dissociated by adding 0.4% ATP and 5 mM MgCl2. The resulting precipitate was fractionated out at 30% saturation of ammonium sulfate. Supernatant was as such exhaustively dialyzed against several changes of 50 mM Tris-HCl and concentrated in dialysis bags on dry bad of PEG6000 at 4°C. The SDS-PAGE profile of the preparation is shown in lane marked S1 in Fig.1B.

Ca2+- and K+(EDTA)-ATPase of acto-S1 were compared as the function of different pH values (Fig. 2). Due corrections were made in the total protein concentration to account the ATPase activity solely as the contribution of acto-S1 polypeptides. For this purpose, the protein concentration was calibrated against the total number of polypeptides present in SDS-PAGE profiles of acto-S1 (Fig. 1B, lane A-S1) using GelPro software. The contribution of contaminating polypeptides to protein concentra-tion was then subtracted from the initial spectrophotomet-rically determined value. Fig. 2 shows that for acto-S1 as well as the S1, K+(EDTA)-ATPase is 2-3 times higher than the Ca2+-ATPase. A similar rationale can also be applied to the ATPases levels of acto-S1 and S1.

The most important characteristics of C. gachua S1, however, are the maxima around neutral pH rather than to-wards the alkaline range; and the value of KD, the rate constant of heat inactivation of Ca2+-ATPase at 30°C, that was 2.63 ±1.3×10-4/sec-1. This is the highest value recorded for a fish S1, so far.

As for the submolecular polypeptide composition (lane marked NAM in SDS-PAGE profiles shown in Fig. 1A and B), C. gachua myosin consists of at least two light chains (LCs) of Mr values of 24 and 14 kD. Since, skeletal muscle myosin of fish usually consists of 3-4 LC [15,16], at least one of the light Mr bands is likely to be a co-stack. During the preparation of S1, one of the two bands is either digested by chymotrypsin (Fig. 1B) or converted to a polypeptide of Mr that would require different electrophoretic and staining conditions to stack and visualize. The probability of digestion of LC of 14 kD Mr to a polypeptide of lesser Mr in fish S1 has been pointed out by other workers also [11,17]. As of now, it can be concluded that LC of the lowest Mr is lost during chymotryptic digestion and subsequent processing. The absence of this LC is apparently of no obvious consequence to biological activity of S1 of C. gachua, as it retains satisfactory levels of ATPase and actin binding capacity. With a 94 k D HC and one 19 kD LC present in SDS-PAGE profiles, the Mr of C. gachua S1 can be summed up to a value of 106, which is reasonably close to the value of 1.0×105 kD reported for S1 of rabbit and two other teleosts obtained after employing different criteria [4,5,13].

It is worth mention that increasing the temperature of acclimation from 10-30°C, decreases kD in mirror carp by a magnitude of about 10 [17]. For C. gachua, a low kD value is an exceptional teleost characteristic, because the temperature of ambient water it was caught from varied between 12-15°C. We construe that the exceptional thermostability of S1 of C. gachua is an indication of adaptive peculiarity of myofibrillar proteins of air-breathing fish species; in particular, the principal determinant of biochemical characteristics, the myosin. Air-breathing fishes require a protein repertoire that as part of metabolic machinery should be capable of supporting life during land excursions to ensure survivorship at the temperatures higher than those of their aquatic ambience. Thermosta-bility of the proteins may be a prerequisite for this adaptation.

The work was supported by a grant from UGC. Authors are thankful to the University for providing facilities. Help of Professor T. M. Haqqi of Case Western Reserve University, Cleveland (U.S.A.) and Dr. Anil Chaterjee, NIO, Goa, is also thankfully acknowledged. 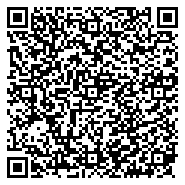