Methods: Ninety suspected cases of Pulmonary Embolism (PE) scheduled for CTPA were randomly and equally divided into 3 groups (group A, B and C). The dose of the contrast medium was 270 mg/ml, 350 mg/ml and 370 mg/ml, respectively. CT values of the pulmonary trunk together with the left and right pulmonary artery were measured. The image quality was assessed based on Signal-to-Noise Ratio (SNR) and Contrast-to-Noise Ratio (CNR). Gender distribution and scores of image quality were compared using Kappa statistics.

Results: The three groups showed no significant difference in gender, age, height, body weight and BMI. The subjective and objective image quality of CTPA did not differ significantly among the three groups. Subjective evaluation showed a high consistence (p=0.85) and the images were all sufficient for diagnosis. The effective dose of group A was considerably lower than that of group B and C.

CT Pulmonary Angiography (CTPA) is an effective tool for diagnosing and evaluating the severity of Pulmonary Embolism (PE). Under the premise of ensuring the quality of the image, the radiation exposure and dose of the contrast agent should be reduced as far as possible so as to minimize the radioactive hazards to the patients. Radiation exposure can be greatly reduced by lowering tube voltage, and the use of low-concentration contrast medium can decrease iodine uptake for the patients, though this may cause a decline of image quality. Iterative reconstruction which consists of interpolation operations can reduce image noise and increase the image quality. In the present study, image quality and radiation exposure of CT Pulmonary Angiography (CTPA) at low kV and low-concentration contrast medium using the iterative reconstruction technique was performed.

Cases scheduled for CTPA from October 2015 to June 2016 were selected, the exclusion criteria excluding those with history of allergy to contrast medium, hyperthyroidism, renal insufficiency, cardiac insufficiency, and BMI>25kg/m2. To reduce the effect from metallic artefacts, patients with pacemaker and bypasses were also excluded. Ninety serially collected cases were finally included and were randomly and equally divided into three groups (group A, B and C), with the dose of contrast medium was 270 mg/ml, 350 mg/ml and 370 mg/ml, respectively. Prior written and informed consents were obtained from each participant and the study was approved by the ethics review board of Tianjin Medical University General Hospital.

As for CT scanner, Philips 256-slice (Royal Dutch Philips Electronics Ltd., Amsterdam, Netherlands) was used. The CT scan parameters for each group were as follows: tube voltage 100 kV and tube current 190-300 mA for group A, tube voltage 120 kV and tube current 250-450 mA for group B and C, collimation 128 × 0.6 mm and tube rotation speed 0.27 s/r. The patients were scanned from head to toes, and the scan range was from the thoracic inlet to the costal margin. The contrast medium was injected according to the same procedures in the three groups: first 40-50 ml of contrast medium was injected, followed by 40 ml of normal saline, with an injection rate of 4.0-5.0 ml/s. The Region of Interest (ROI) was delineated in the pulmonary trunk and CT scan was triggered when the threshold of 60 HU was reached. The CT images were reconstructed with iDose3, with slice thickness of 1.5 mm, slice interval of 0.5 mm and matrix of 512 × 512. MIP, MPR and VR reconstructions were performed on Philips Intellispace Portal workstation.

In order to make sure there were no significant differences in general situation among patients in the three groups, comparison was performed before CTPA scans. Table 1 shows the baseline information of the patients. It is clear that the three groups had no significant difference in age, gender, height, weight and BMI. The result argued that the group division is reasonable.

Table 1: Comparison of the general data of patients in the 3 groups. 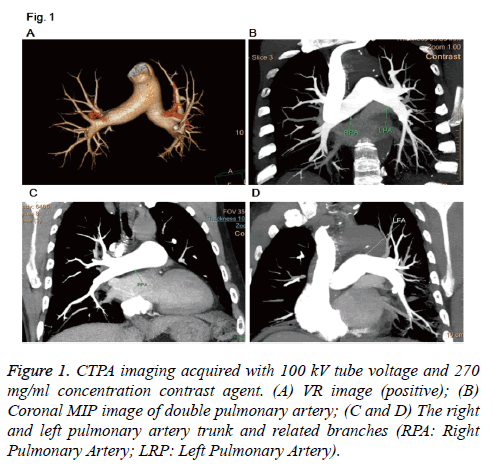 In order to evaluate the effect of low radiation dose and low concentration contrast agent on CTPA imaging ability for pulmonary artery, image quality in the three groups was compared. Subjective evaluation of image quality showed a high consistence (p=0.85), and all images could be used for diagnostic purposes.

This image scored 2 points but was still sufficient for diagnosis. All images scored 3 points in the three groups were caused by artefacts arising from the contrast medium in the superior vena cava (Table 2).

Table 2: Comparison of subjective evaluation of CTPA image quality in the three groups.

Table 3 shows the objective evaluation of image quality. There was no significant difference in CT values, background noise, SNR and CNR of the pulmonary trunk, and the left and right pulmonary artery between the three groups. To sum up, the results demonstrated that the ability of CTPA imaging to pulmonary artery in low dose group is consistent with the conventional dose groups; both could get the image quality that meets the diagnostic requirements.

Table 3: Comparison of objective evaluation of CTPA image quality in the three groups.

Table 4: Comparison of radiation dose parameters and iodine dosage between the three groups.

Both the temporal and spatial resolutions of CT scan have been improved dramatically in the past decade, making the imaging of sub-segmental pulmonary artery easier and clearer in CTPA. Currently, CTPA is considered as the first-line choice for the diagnosis of PE. The latest development of CTPA is the use of iterative reconstruction to compensate for potentially poor image quality at low kV, which is intended for reducing the radiation exposure of the patients [1,5,7,8]. Our study showed that CTPA scans under low kV and low-concentration contrast medium can obtain high quality images.

Our study was restricted in the following aspects: firstly, the patients chosen had a BMI generally below 25kg/m2 and whether the scan scheme with 100 kV tube voltage and 270 mg/ml contrast medium can achieve satisfactory effects for patients with higher BMI is unknown. Secondly, the potential impacts from high BMI, cardiac insufficiency, and pacemaker were precluded, but not the impact from PE. Finally, repeated scans with different schemes were performed for the same patients to collect the images, which would increase the radiation exposure of patients.

Collectively, by using the iterative reconstruction technique, CTPA images qualified for the diagnostic purpose can be obtained at 100 kV tube voltage and low-concentration contrast medium (270 mg/ml). More importantly, this scan scheme considerably reduces the radiation exposure and total iodine uptake for the patients.