A study of oral lesions among H.I.V positives in a tertiary care hospital.

The objective of the present study was to determine the pattern and prevalence of oral lesions in 514 seropositive patients from central area of Madhya Pradesh. Methods: The study sample comprised of 514 patients attending the regional ART Centre at Rewa, Madhya Pradesh. Confirmation of seropositivity was done by serial rapid tests and the oral lesions were diagnosed based on clinical appearance. Results: Out of 514 patients, oral lesions were encountered in 74.70% of the patients. Oral candidiasis outnumbered all other manifestations with a prevalence of 41.05%. Multiple manifestations were seen in nearly all patients. The pattern of oral lesions associated with HIV infection was not markedly different from those reported in literature, however, the prevalence of such type of lesions differ slightly.

Acquired Immunodeficiency Syndrome (AIDS) is an infectious disease caused by HIV, and is characterised by prolong immuno supression that leads to opportunistic infections, secondary neoplasms and neurological manifestations [1].

According to the WHO 2008 report, around 33.8 million people world wide are living with AIDS of which 3.8 million are from Indian subcontinent. Oral manifestations are common in HIV positive individuals and are seen in 30- 80% of these patients [2].

Oral manifestations in retrospective cases can suggest decreased CD4 cell count and increased viral load which might also aid in diagnosis, progression and prognosis of the disease [3]. Risk of oral complications increase with immunological deterioration. The fact that oral lesions can be readily detected by a trained clinician in a standardized, objective fashion without any complicated or expensive technique has increased their utility [4].

The present cross-sectional study was thus carried out with the aim to determine the pattern and frequency of oral lesions associated with HIV infection in our environment in order to contribute to the existing data on oral HIV lesions in India.

A total of 514 patients; attending the ART centre at SSMC, Rewa, M.P; were selected irrespective of age and sex over a period of one year (from Aug 2010 to July 2011) after taking due informed consent from each patient for the study.

Confirmation of HIV positive status for all the patients was done by serial rapid test at ICTC’s. Detailed case history was taken from each patient on a case history proforma which included demographic information, mode of transmission of disease and presence of systemic coinfection.

The present study comprised of 514 patients attending the ART Centre at SSMC, Rewa. The oral lesions were commonly found elevated in the third decade of life.

The prevalence of oral lesions in the present study was found to be 74.70% as 384 cases showed the presence of a large variety of oral lesions. These lesions were rarely encountered in isolation. Each patient showed multiple manifestations in different areas of oral cavity. 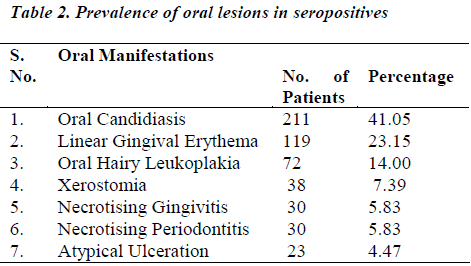 Human Immunodeficiency Virus is a retrovirus, which has specific affinity for CD4 cells (T helper cells). On entry into the host body, the HIV attacks and disturbs the delicate balance, thereby rendering the host susceptible to a lot of life threatening opportunistic infections, neurological disorders, unusual malignancies and oral lesions [6]. Some specific common oral manifestations in HIV infection were found to be associated with immune supression. These oral disorders may be implicated in the diagnosis and prognosis of HIV infected patients. This study determined the prevalence of oral lesions in seropositives in the central parts of Madhya Pradesh.

There is no pathognomonic oral lesion associated with HIV-AIDS, but some lesions like oral candidiasis had been consistently found to be the first recognised oral manifestation and sometimes the only initial clinical sign of the HIV infection [8].The prevalence rate of candidiasis in the present study is 59.94%. The commonest species of candidiasis involved are candida albicans although non albicans species have also been reported. Oropharyngeal candidiasis was the most common oral infection and was frequently encountered in the following forms hyperplastic, erythematous, pseudomembranous and angular cheilitis type. This finding is similar to various studies in Africa e.g. in Kenya [10], Zaire [9], South Africa [2] and Zimbabwe [11].

Hyperplastic or chronic candidiasis presents as white nonremovable plaque over the mucosal surface, hence they can not be scraped off. Erythematous candidiasis presents as a red flat subtle lesion either on the dorsal surface of tongue and / or the hard / soft palate. Patients complained of burning sensation in the mouth, more so while eating salty and spicy food. Pseudomembranous candidiasis appears as creamy white curd like plaque on the buccal mucosa and tongue that could be whipped away, leaving a red or bleeding surface. Angular chelitis presents as redness, ulceration and fissuring along the corners of the mouth. In the present study angular cheilitis usually occurred as a co-symptom with erythematous or pseudomembranous candidiasis.

In the present study, the next common oral manifestation appeared in the form of linear gingival erythema in 119 subjects (30.98%) which manifested as generalised marginal gingivitis in most of the patients. Such gingival lesions were predominant oral lesions in patients from south India [6,7].

Oral hairy leukoplakia (OHL) was less frequently reported in previous studies in India. Ranganathan et al [6,7] reported one case (0.33%) and 21 (2.7%) cases among 300 and 1000 HIV patients, respectively. In contrast, the present study reported 72 patients (18.75%) cases amongst 514 patients. The lesions were usually seen on lateral surfaces of tongue, but also extended on to the dorsal and ventral surfaces. In most cases, it was bilateral and asymptomic. It can be diagnostic in absence of other identified cause of immunosuppression [12].

Xerostomia is common in HIV disease, most often as a side effect of antiviral medication commonly prescribed for patients with HIV infection or may also be due to proliferation of CD8+ cells in salivary glands. 38 cases (9.8%) in the present study complained of pain, burning sensation, dysphagia & reduced oral intake of food due to xerostomia. A higher prevalence (36%) of xerostomia was reported in study by Lalit Shrimali [13].

Periodontal diseases are common in both asymptomatic and symptomatic HIV patients, usually seen as necrotising ulcerative periodontitis (NUP) which was a significant finding in 30 (7.8%) cases. It had a sudden onset with loss of bone & soft tissue. It is usually indicative of severe immuno suppression, which presents as severe pain, teeth loss, bleeding and foul odour. Necrotising ulcerative gingivitis (NUG) was seen as ulceration, sloughing and necrosis of one or more interdental papillae in 30 (7.8%) cases. Patients complained of pain, bleeding & halitosis. Gingival and periodontal conditions were predominant lesions in HIV infected patients from south India [6,7].

Ulcers not otherwise specified (UNOS) or atypical ulcerations comprised of 5.98% (23cases) oral lesions in our study. However, a higher frequency (12.3%) was reported by Tsang and Samarnayake [14]. These ulcers appear in acute period of HIV infection. Pharmacological agents are the most common causes of recurrent apthous ulcerations, commonly named as canker sores.

From the above discussion, it is clear that not a single study follows a common pattern. Oral lesions in HIV infected patients differ in different parts of the county as well as the world.

The pattern of oral lesions associated with HIV infection was not markedly different from those reported in literature, however, the prevalence of such type of lesions differ slightly. It can be concluded from the present study that oral candidiasis specifically outnumbered all other oral manifestations found in seropositive patients. The above mentioned list is not the complete panorama of manifestations which can be observed in an HIV patient but only an illustration of common lesions encountered in patients from central India. The present study again emphasises the usefulness of orofacial examination of the patients by collaborative effort of dental surgeons and physicians and increases their index of suspicion of the infection with the appearance of these HIV associated oral lesions.