The costoclavicular ligament is one of the most important ligaments of the sternoclavicular region which not only strengthens the sternoclavicular joint from its inferior as-pect but also assists in the movements of pectoral girdle [1,2]. This ligament is prone to injury in the painters, con-struction workers and kayakers [3,4,5]. In sternocosto-clavicular hyperostosis, hyperostotic changes are seen in the medial end of clavicle, first costal cartilage and ad-joining part of sternum which may later involve the costoclavicular ligament [6]. As the subclavian vein trav-els just posterior to the costoclavicular ligament, this ana-tomical area becomes crucial while placing venous cathe-ters [7] and pacemakers [8, 9]. It also acts as a landmark for deciding the length of resection of the medial end of clavicle [10].

Costoclavicular ligament is a strong, dense band which extends from the first costal cartilage and the adjoining part of the first rib to the inferior surface of medial part of the shaft of the clavicle [11]. It is disposed as an inverted, truncated cone, flattened antero- posteriorly. The impres-sion area of the costoclavicular ligament on the clavicle is either described as a rough impression [12] or tuberosity [11] or rough oval depressed area [13] which is also commonly termed as rhomboid fossa. Anthropologists have widely studied this fossa as a marker for age and sex determination [14, 15]. These normal morphological vari-ants of attachment area of costoclavicular ligament on clavicle may be misinterpreted as pathological conditions by an inexperienced observer [16]

To study the morphology of the area of attachment of costoclavicular ligament on clavicle and first rib, the bones were obtained from the osteology lab of Anatomy Department of Chhatrapati Shahuji Maharaj Medical University, Lucknow, UP, India. Total 184 adult first ribs were studied, out of which 90 were of right side and 94 of left. 113 adult clavicles were observed carefully for the pattern of impression of costoclavicular ligament. 60 clavicles were of right side and 53 belonged to left. The various patterns of the impression were categorized and their incidence was calculated.

The inferior surface of clavicle near its sternal end pro-vides attachment to costoclavicular ligament. This area was well demarcated from rest of the bone in most of the cases and was invariably oval in outline and showed three distinctive types of surface projection viz. flat (34.51%), elevated (29.21%) and depressed (32.74%).

In few clavicles (3.54%) this well circumscribed area was not observed, instead the surface architecture of this par-ticular area was same as that of rest of the inferior surface (Fig 1f) and its incidence was same on both sides. The flat impression was more common on left side where as ele-vated and depressed types of impressions were more common on right side (Table 1). 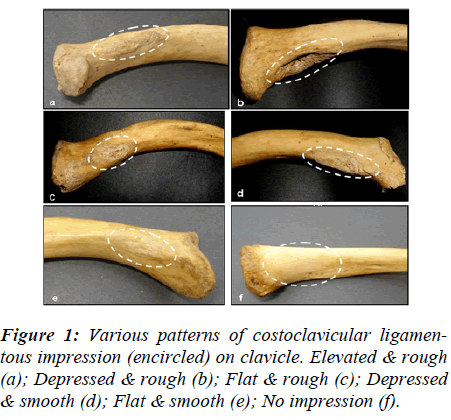 The surface projections were either rough (69.03%) or smooth (27.43%) and the incidence of roughness as well as smoothness was higher on right side (Table 1b).

The costoclavicular ligament is attached to the inner half of anterior end of first rib, medial to the groove for sub-clavian vein and extends to the adjoining part of first cos-tal cartilage. Out of 184 first ribs, only 30 had ossified costal cartilages. Out of these 30 ossified costal cartilages, 16 were partially ossified and the area of attachment of costoclavicular ligament was unossified and therefore deficient, so we could not comment on the morphology of the ligamentous impression in these cases.

Unlike oval impression of costoclavicular ligament on clavicle, corresponding area in majority of first rib did not exhibit any fix shape or circumscribed margin. In accor-dance to the clavicle, the concerned area on first rib also showed different morphological features. The area medial to the groove for subclavian vein was either elevated (66.85%) or flat (33.15%). Elevation was more common on right side and flatness on the left (Table 2). The ele-vated areas showed a distinct ridge commencing from the inner margin and running forwards and medially, dividing it into postero-medial triangular slope for attachment of costoclavicular ligament and antero-lateral slope for ten-don of subclavius muscle (Fig 2a). It was observed that the surface of none of the first rib was depressed at the site of ligamentous attachment. The surface architecture of the impression area was either rough (65.76%) or smooth (34.24%). Roughness predominated on the right side while smoothness on the left (Table 2). 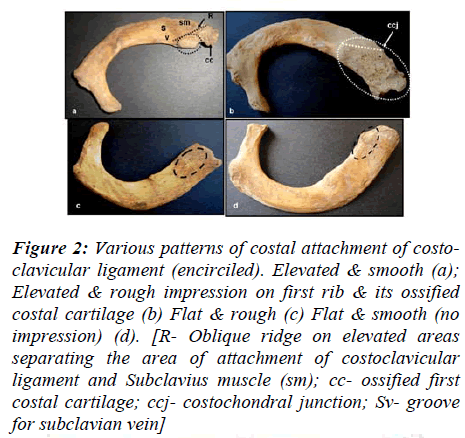 Different combinations of surface projection and architec-ture observed on first rib were flat and rough (15.22%) (Fig 2c), elevated and rough (50.54%) (Fig 2b) and ele-vated and smooth (16.31%). In 7.07% ribs , this elevated and smooth area was in the form of a tubercle (Fig 2a) while in 8.15% ribs this region showed well circum-scribed area which was half oval and in 1.09% ribs it was oval in shape. These well circumscribed areas were des-ignated as demifacets or facets respectively (Fig 3c, 3b). A fourth type of pattern was also observed in which the concerned area was flat and smooth (17.93%). As in these ribs the surface architecture of the impression area was same as that of rest of the bone so it was considered that in these cases ligament has imparted no impression (Fig 2d). Except for the roughened elevation all other patterns were more common on left side (Table 2). 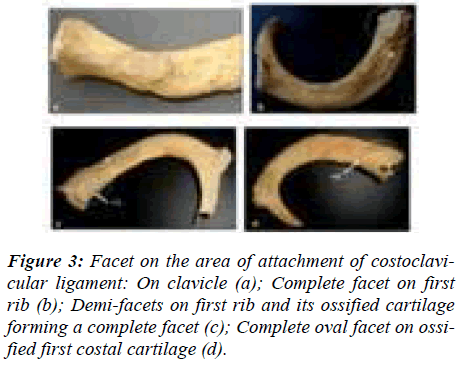 Out of 14 completely ossified first costal cartilages, 9 car-tilages(64.29%) exhibited elevated and rough (Fig 2b) while 5 (35.71%) showed elevated and smooth impres-sion for costoclavicular ligament. Out of 5 smooth eleva-tions, 4 had demifacets (28.57%) and only one ossified costal cartilage (7.14%) showed presence of well circum-scribed complete facet (Fig.3d). The incidence of facet was higher on right side (Table 2).

Due to the recent advancements in the field of imaging techniques, the structural details are easily visualized. A deficient knowledge of normal morphological variants becomes crucial while differentiating between normal and abnormal. The morphology of attachment area of costo-clavicular ligament on the clavicle as well as the first rib is a relatively neglected entity that can potentially cause diagnostic errors.

According to the present study the attachment area of costoclavicular ligament on clavicle was invariably oval in shape and well circumscribed except in a few cases (3.54%), where no impression was seen. Contrary to this, the attachment area on the first rib did not exhibit any well defined margin or shape except in 9.24% cases where oval or half oval impression was present. The shape of this impression on clavicle has unanimously been reported as oval [1,17,13]. No study has been re-ported to the best of our knowledge regarding the shape of ligamentous area over first rib. The size of impression on clavicle was larger as compared to that on first rib and its cartilage which suggests that the shape of the ligament attached to this area is truncated conical, as described classically [13].

The most common type of impression found in the pre-sent study ie depressed and rough type is also termed as ‘rhomboid fossa’. Jit & Kaur studied a large population of adult clavicle (789) in Indians and studied exclusively the presence of rhomboid fossa and reported 37.3% incidence which is almost same as that found in the present study [14]. The presence of rhomboid fossa is correlated with the age and sex of the individual by many workers [16,18,19]. Paraskevas et al studied 80 chest radiographs and found 26.88% incidence of excavated type of rhomboid fossa which was correlated with the gender, sidedness and handedness. They found higher incidence of fossa on right side in right handed person and on left side in left handed person so they proposed mechanical theory for the formation of fossa [19].

Carrera et al recommended identification of this ligament during surgeries for resection of the clavicle’s proximal extremity [10].But these surgeons should be aware of the fact that this ligament can be either absent or may be merged with the sternoclavicular joint capsule.

The knowledge of various types of ligamentous impres-sion on clavicle and first rib, as observed in the present study, is important clinically because these morphological varieties can be misinterpreted by radiologists while observing sterno-costo-clavicular region. Rhomboid fossa can be misdiagnosed as simple benign fibrous displasia or chronic osteomyelitis [16] whereas elevation on clavicle as well as first rib may be confused with hyperostotic changes. These morphological skeletal traits are also of great value for anthropologists and anatomists so their description should be incorporated in the standard text books of medicine.

The most common type of pattern of costoclavicular liga-mentous attachment area on clavicle is depressed and rough and corresponding to it the most common pattern on first rib is rough elevation. Circumscribed smooth ele-vation on clavicle, first rib and its costal cartilage indi-cates presence of synovial joint among them. The knowl-edge of normal morphological variants of costoclavicular impression areas is clinically useful for radiologists, or-thopedicians, anaesthetists and cardiologists.