A reliable and accurate system of joint position sense measurement

Objective: Measurement of range of motion is used to measure the joint Position Sense (JPS). The objective of this study was to give an easy and less costly method of measuring JPS.

Methods: The study conducted at Tehran University of Medical Sciences, in Iran in May 2017. In this study researcher used the system of digital photographs, non-reflective markers and software for measuring the accuracy and reliability. The fixed arm of the goniometer was horizontal. The moveable arm was positioned at the 15° initially and then selected it at different degrees (30, 45, 60 and 75) randomly. 5 reference angles were selected from 15° to 75°. By using moving arm three photos were taken from each angle. Reliability and validity of measurement for each angle was disclosed by utilizing T-test, correlation (reliability test) and R square of regression (validity test). Also relative and absolute error is used to evaluate the accuracy of this method.

Results: Results showed that mean (R^2) for validity is 0.99, T-test p-value for reliability is 0.41 it means there is no significant difference between these methods and for correlation (reliability) mean value was 0.97 and averages of absolute error and relative error were (-0.44 and 0.62) respectively.

Conclusion: It was disclosed that method comprising of digital photography non-reflective markers showed similar results as compared to goniometer in terms of reliability, validity and accuracy of this method. In conclusion, it was a novel approach to measure JPS with salient features of user friendly, fast, less expensive, accurate and reliable.

Angular measurement has been used to measure Joint Position Sense [1]. Different method used to check the angle measurement such as electric goniometer and digital photographs [2,3]. Electrogoniometer cannot be used for all body because it may receive abnormal sensory feedback [1]. It can also be affected by the pressure and straps which create less sensory information [4]. In this study universal goniometer is used which is more reliable than electronic goniometer [5]. In computer using method for analysis of JPS, angles were measured through digital cameras, video cameras and digitizing system which is expensive and difficult to operate [3]. In some system infrared was used to identify the angle [6]. In kinematic researches the main focus was on the motion analysis which is not the cause. In other words the measurements were taken by taking videos of moving object or body segments [7].

Very less researches were present regarding the method of measuring JPS by using goniometer, photographs [8]. Skin markers have no issue with restriction of movement and usage is simple [9]. Goniometric measurement of the angle with video films is sufficiently precise and some studies used goniometer and photographs to measure JPS [10-12]. But taking photos and then taking prints of those photos to measure JPS was costly method as Herrington used the method to measure knee JPS [10]. Although, angle measurement is easy by using these two methods, their accuracy and reliability is not clear. The objective of this study was to explore the issue: 1) Evaluating the method comprising of non-reflective markers, Microsoft excel software and digital photography in terms of accuracy and reliability of angles measurement.

An innovative study to design a reliable and accurate system of joint position sense measurement was conducted at Tehran University of Medical Sciences, international campus in May 2017.

This research was following the method of Linden et al. which was parallel to Scholz et al. researcher used the system of digital photographs, non-reflective markers and software for measuring the accuracy and reliability [13-15]. Square markers were used for capturing the goniometer ends and scale for calibration. Goniometer attached on board and ends were prominent by red markers. The fixed arm of the goniometer was horizontal. The moveable arm was positioned at the 15° initially and then set it at different degrees (30, 45, 60 and 75) randomly.

Digital video camera (Sony 16.1 M pixels) was positioned at 90 cm far from the board and raised 80 cm from the ground, with its lens directing in the direction of the center of the board. Five reference angles were selected from 15° to 75°. By using the moving arm three photos were taken from each angle. Then the alteration in each angle was measured with the help of self-made excel software.

After that the pictures were transported to computer and imported in the computer based application “Paint” in which researcher noted the position of X and Y axis and shifted these values in self-made Microsoft Excel software which gave the value of T-test, correlation between three trials (3 repetition at 15-75 degrees) and R square regression between average of three repetition and selected goniometer at different degrees (15°-75°).

Absolute Error (AE) is operationally defined as the absolute difference between the target angle and the perceived angle. AE is calculated for each of the 3 trials for the 3 target angles for each limb of each subject [16].

The Relative Error (RE) represents the variability of the errors between trials and indicates the consistency of proprioceptive performance (Figure 1) [16]. 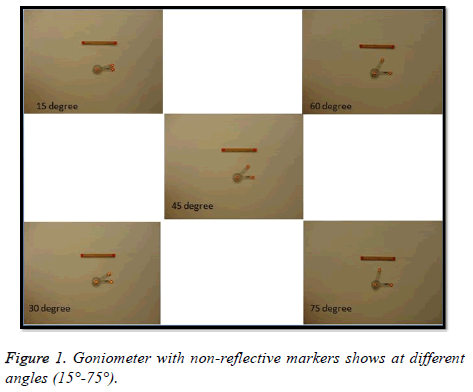 Reliability and validity of measurement of each angle was disclosed by utilizing T-test, correlation (reliability test) and R square of regression (validity test). Also relative and absolute errors were used to evaluate the accuracy of this method.

Correlation (intrarater reliability) of these two methods manual and Excel Software analysis was found that by using Pearson product moment correlation coefficient. According to above analysis value it was disclosed that method comprising of nonreflective markers showed similar results as compared to goniometer in terms of reliability, validity and accuracy of this method.

The system of digital photography, non-reflective markers gave similar results for goniometer on the board. Three repeated tests for each angle in terms of mean are shown in Table 1.

Table 1. Values of three repeated tests for each given angle and the difference between each reference angle (absolute and relative error) and the average angles in terms of reference angle.

Validity of the system of digital photography, non-reflective markers was high (<0.9) (Figure 2), and reliability of this system showed high correlation to traditional goniometer (<0.9) and no significant difference between repetitions (<0.05). Table 2 indicates values and mean of three tests. Absolute and relative error of above system is very low degree (>1 degree) that indicates high accuracy of this system (Table 2). 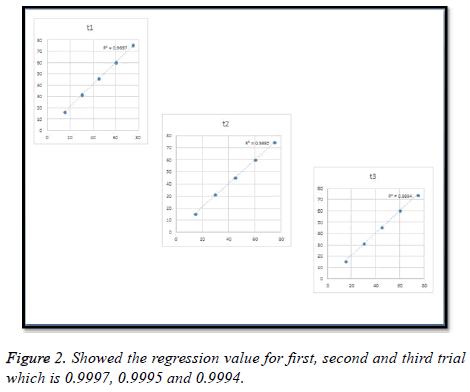 The objective of this study was to evaluate accuracy and the reliability of method comprising of non-reflective markers, Excel Software analysis and digital photography.

The reliability of the system with goniometer was 1. This means that measurement in the limit of calibration board was consistent.

This error does not exist in present method. The slopes of regression equations (validity test) were respectively 0.9997, 0.9995 and 0.9994 (P=0.000) for all three repetitions. This means that this method was accurate to measure values of angles. Some previous studies used movie for measuring joint angle in which they recorded the angle through goniometer and protector, while measuring the angle they had to pause the video and then measure the angle on wall or wherever the projector reflects the light. This method causes many errors as surface where image was made may not smooth hinders in measurement. But this study used a new method which had no errors like previous studies [18]. Correlation coefficient in manual analysis of joint measurement was 0.9996 to 0.9999 (P=0.000). In this study researcher use contrast reflective color markers which also reduced the risk of error. Intra-rater reliabilities were high between the measurements respectively for all angles measured. In this study the goniometer was fixed on the wall to further decrease the risk of slipping and markers were used in square to make it easy to find the corners. It made the higher reliability of this method as compared to previous studies [19,20]. T-test also reinforced that it minimize the mean difference which is less as compared to previous studies [21]. Microsoft Excel and paint were the applications which rarely used in medical researches which were used in this study. Previous studies which used manual analysis showed that testretest reliabilities were high with manual calculation of errors but to calculate value from goniometer may cause some error as rounding off the value but Microsoft Excel is more precise in calculating the degrees as it set on reading 2 values after decimal [1,20,22-25].

Therefore this method is reliable to use in laboratory for measuring joint position sense. It is low cost and easy to use method. This study focus on points of previous studies which cause errors as using of square markers instead of circular, higher contrast markers, reflective markers, standard goniometer was used, camera was fixed on plain surface and light reflection was reduced by using high resolution camera and dark room [17,26].

We have no conflict of interests.

This is part of PhD thesis. This project was supported by Tehran University of Medical Sciences-International Campus, Faculty of Rehabilitation.