The Vertebral Artery (VA) usually arises from the superior surface of its ipsilateral Subclavian Artery (SA), courses superiorly to gain entrance to the 6th cervical transversarium to ascend in the vertebral column before gaining entrance to the brain via the jugular foramen where the 2 vertebral arteries join to form the basilar at the pontomedullary junction.

Vujmilovic et al. [1] performed a CT angiographic study of the variability of the origin of the VA from SA with a reported incidence of 95.08% a common origin of the LVA and LSA sharing a common origin from the aortic arch with 0.45% with the LVA originating from the aortic arch with a reported incidence of 4.47%. They also reported varying entrance level into the transverse foramen with 87.5% entrance at C6 followed by C5 (8.93%), C4 (3.12%) and C7 being the least entrance level with an incidence of 0.45% [1].

The syndrome, however, remains characteristically asymptomatic and solely poses no serious danger to the brain. Recent studies have shown a linear correlation between increasing arm blood pressure difference with the occurrence of symptoms. Atherosclerosis of the SA remains the most common cause. Doppler ultrasound is a useful screening tool, but the diagnosis must be confirmed by CT or MR angiography [2].

Variants of the VA have been reported in many surgical, radiologic, post-mortem and cadaveric dissection studies. Einstein VB et al. [3] reported an anomalous origin of the LVA from the aortic arch. Origins of the LVA from the arch of the aorta between the Left Common Carotid Artery (LCCA) and LSA constitute the highest incidence of variants of the VA. Strub WM reported the LVA originating from the thyrocervical trunk [4]. Gluncic V et al. [5] described a case of an unusual origin of both vertebral arteries in a singular cadaver. On the left, the artery arises directly from the common trunk of the vertebral and Subclavian Artery (SA) at the aortic arch and enters the transverse cervical foramina at C6. On the right, the artery originates from the Right Common Carotid Artery (RCCA).

Lemske et al. [6] reported the case of an aberrant RVA of aortic arch origin distal to the LSA as the last branch off the aortic arch. The underlying factor leading to subclavian steal is proximal subclavian artery occlusion or severe stenosis. In most cases, this is a result of atherosclerotic arterial disease, which has preponderance for the left side. On the right side, innominate artery disease or occlusion may result in occlusion of the subclavian artery origin. Most literature reports the prevalence of SSS as between 0.6% to 6.4% [7,8].

An incidence of 2.5% was reported by the joint Extracranial Occlusion by Fields et al. with 5.3% of these patients with experiencing neurologic symptoms [9].

During routine academic dissection of the thorax in our facility. we encountered an aberrant origin of the RVA in a 76-year-old female cadaver (Figure 1). 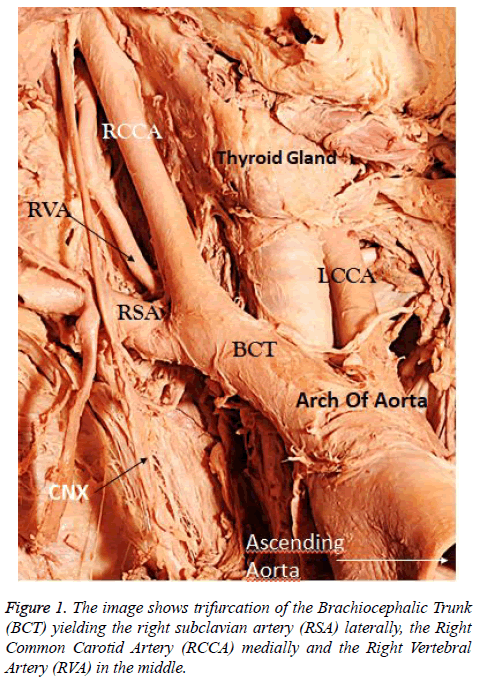 We observed a left-sided aortic arch with a normal 3 vessel morphology comprised of the brachiocephalic trunk, the LCCA, and the LSA as the most distal and inferior vessel off the aortic arch. Careful examination of the branching pattern revealed the RVA not originating from the SA as in the norm, but rather the RVA was part of an aberrant branching pattern, centrally placed between the RCCA medially and the right subclavian artery laterally (Figure 1) in a trifurcation branching variation of the BCT (Figure 1). The RVA then coursed superiorly in the superior mediastinum to gain access into the 5th cervical transversarium to begins its vertebral coursing (Figure 1). The aberrant RVA was of a good size (>2.5 mm). The LVA took origin normally off the superior surface of the LSA commencing its cervical coursing and gaining access into the 6th cervical foramina to embark on its vertebral segment.

An occlusion, proximal origin of LSA

Occlusion occurring proximal origin of the BCT before the latter trifurcated

Variant origins of the VA have been documented by several authors and have been found more bilateral than unilateral and more on the left than on the right. Most variants of the VA are asymptomatic but 5% of these have been found with clinical implications [10].

Other reported variants of the RVA include the RVA as the last branch of the aortic arch, distal to the LSA, the artery arising from the left common carotid artery LCCA, especially in the presence of an aberrant RSA (lusoria dysphagia) instances in which the RSA originated as the most inferior branch of the aortic arch. Ishikawa K et al. [11] reported the independent anomalous origin of the RVA from the RCCA.

Best IM et al. [12] reported four-vessel left aortic arch identified consisting of the RCCA, LCCA, RSA, and LSA. The RCCA gave rise to the RVA in the chest while the normally located LVA arose from the LSA. Goray VB et al. [13] reported a unique case with anomalous origin of both vertebral arteries as additional branches of the aortic arch distal to LSA.

The case of a dual RVA, one originating from the arch and the other from the LSA had been reported. From extensive literature review found the VA arising as part of the trifurcation of the BCT infrequent. Patients with neurological symptoms should be investigated for aberrant origins of the VA.

The usual normal arising VA from the superior surface of the SA is important in supplying blood through a retrograde flow when there is a proximal occlusion to its ipsilateral SA. Subclavian Steal Syndrome consists of a plethora of symptoms as a result of this obstruction and retrograde flow in the VA belonging to the occluded SA. The arm will be supplied by blood from this retrograde flow in the VA at the expense of the vertebrobasilar circulation. This SSS is said to be more severe than the typical vertebrobasilar insufficiency. Neurological complications, presyncopy and actual fainting are part of the signs and symptoms of VI including claudication in the upper limb most patients with subclavian artery stenosis are asymptomatic. In many patients, subclavian artery occlusive disease is found incidentally by noting a blood pressure discrepancy between arm pressures or on ultrasound testing of patients with carotid or coronary artery disease. Rogers JH and Calhoun RF [14] stated that a careful history and physical examination may identify subtle findings and that for the majority of patients; the finding of "angiographic steal" is clinically insignificant and is not associated with an increased risk of vertebrobasilar ischemia. The risk factors for developing atherosclerotic plaques have been recognized for some time and are categorized as either nonmodifiable or modifiable. Nonmodifiable risk factors include the following: age, male sex family history, while modifiable risk factors include: cigarette smoking, stenosis, hypercholesterolemia, diabetes mellitus, and hypertension [2]. A steal phenomenon is apparent on duplex scanning in approximately 6 percent of patients with asymptomatic neck bruits, but in one series, none of the patients developed symptoms during a two-year followup period [15]. 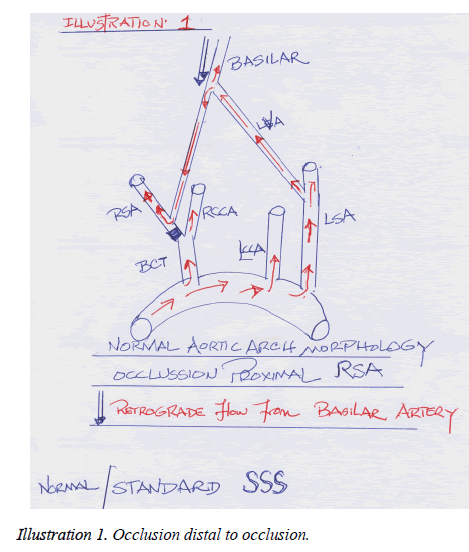 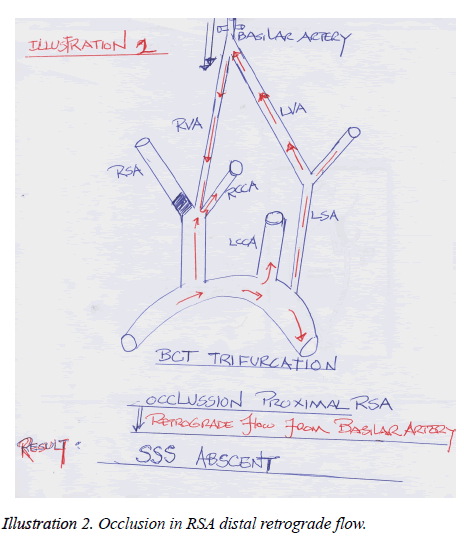 The risk of VA injury in endovascular interventions in the head and neck and from diagnostic radiology will be minimized with the knowledge of variants of the artery, especially in this age of increasing carotid stents, vertebral stents and new therapeutic options for intracranial interventions. 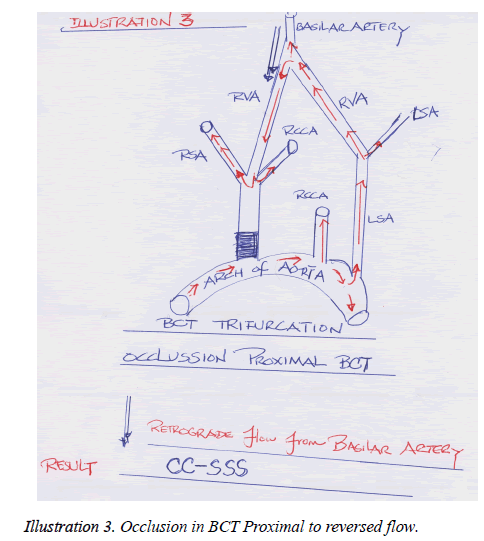 Again, a hypothesized CC-SSS will be beneficial in a trifurcated RVA arising from a trifurcated BCT. This phenomenon will be more adverse because of a larger steal from the vertebrobasilar system with exaggerated symptoms of the Vertebro-basilar Insufficiency (VI). 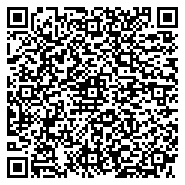