IgG4-related disease is a multi-organ immune-mediated condition that mimics many malignant, infectious, and inflammatory disorders. The epidemiology of this disease has not been completely investigated. A majority of patients reported in the literature to date are from Japan, but the pathology has been described all across the world and there is no strong evidence to suggest a deviation for Asian populations. The mean age at diagnosis is reportedly approximately 60 years and there is a decided male predominance for many clinical features, with an overall male:female ratio of 8:3 [1]. The clinical entity was not widely recognized in medicine until the middle of the 2000’s [2], although chronic fibro-inflammatory diseases including Kuttner’s tumor (which is recognized and reported early as 1980) are now known as IgG4-related sialadenitis or IgG4- related diseases [3]. Accordingly, it is likely that there are many patients who have long remained undiagnosed with this disorder and have unexpected complications. We experienced a case of IgG4-related disease, which was consequently diagnosed recently, with a rare complication of intestinal twisting resulting in intestinal obstruction 10 years prior to the confirmed diagnosis.

An 80 year old man was referred to our department because of respiratory distress on effort (DOE). In 2010, he had received aortic valve replacement for severe aortic regurgitation. Afterwards, he had been followed up by cardiovascular surgery receiving anticoagulant therapy. In 2015, he exhibited worsening shortness of breath. Based on his previous smoking history (Brinkman index: 750), spirometric analysis, and imaging examinations of the chest, he had been diagnosed with the coexistence of chronic obstructive pulmonary disease and idiopathic pulmonary fibrosis, and received home oxygen therapy (O2 1.5 L/min). However, the respiratory DOE remained and the patient was introduced to respiratory internal medicine. For medical history, in 2003, he had a subcutaneous nodule (lymph node) in the right upper arm resected. In 2004, he was suffered from cholecystitis and had a cholecystectomy. Also, at the age of 70 in 2005, he had intestinal twisting, resulting in an obstructive ileus, which forced him to receive partial colectomy. In 2007, he exhibited benign prostate hypertrophy, which forced him to receive radical prostatectomy. On physical examination, his blood pressure was 130/65 mmHg, pulse rate was 72 beats per min, temperature was 36.8C, and axillary lymph nodes were palpable with good mobility. Breath sounds in the lungs were almost normal and no hepatosplenomegaly was detected; however, bilateral lower leg edema was slightly observed. A chest X-ray and computed tomography (Figure 1A) showed marked bilateral mediastinal lymphadenopathy. Biochemical examination demonstrated hyperproteinemia (total protein: 10.0 g/dL) with hypoalbuminemia (albumin: 2.4 mg/dL) and promotion of ESR (>140 mm/h). The serum level of IgG was 6156 mg/dL, whereas that of IgM was normal. In suspect of lymphoproliferative disorders, we performed resected biopsy of axillary lymph nodes. A histological and immunohistochemical examination of the biopsy specimens revealed an increase in the number of mononuclear cells (Figure 1B), which were extensively positive for CD138 marker (which can identify plasma cells: Figure 1C). Furthermore, immunostaining with anti-IgG4 antibody demonstrated that immunoreactive IgG4 was expressed strongly in these plasma cells (>100 per high power field: Figure 1D). In addition, the value of serum IgG4 was 2200 mg/dL, whereas that of soluble interleukin-2 receptor was within normal range. Consequently, the patient was diagnosed as having IgG4-related disease. As the presentation/ development of IgG4-related disease is generally subacute with symptoms and organ dysfunctions for months or even several years before diagnosis, we next obtained all tissue specimens extracted previously, such as subcutaneous nodules, gallbladder, colon (Figure S1), prostate, and aortic valve, from our and other institutes, and restudied immunohistochemistry for both CD138 and IgG4 on these specimens. As a result, in all specimens except for the mitral valve, immunoreactive IgG4 positive cells were significantly observed (Table S1). Therefore, almost all of his past pathological conditions could be explained by IgG4-related disease. As the patient is 1) too old to start prescribing steroids (he has already received antihypertensive treatment with angiotensin II receptor blocker) and 2) refused to receive the treatment, he is being politely observed without steroids in our outpatient clinic. 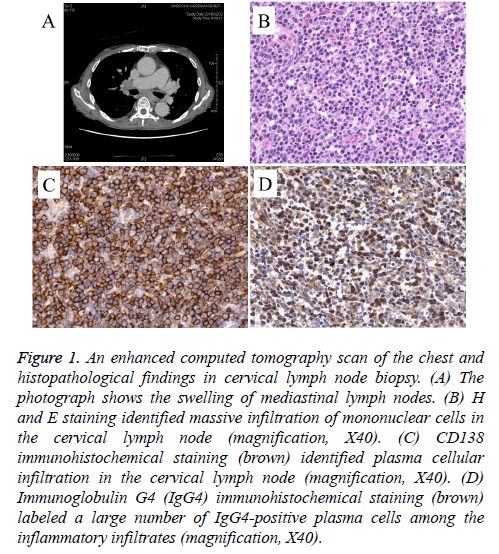 “IgG4-related disease” had been medically uncommon until the middle of the 2000’s, thus, it is likely that un (mis) diagnosed pathological patients/disorders have existed, similar with the case in our report. Our present case was found to have more than 10 years of onset of IgG4-related disease confirmed by histology. Accordingly, physicians should retrospectively look back at their clinical data, including past medical history with histological samples (if possible), when they suspect their patient has IgG4-related disease to investigate the patient’s pathophysiology and perform proper treatment against the disease. Furthermore, in this case, as IgG4-related disease progressed slowly for over 10 years without immunosuppressive treatments, such as steroids, the long-term prognosis of this disease is still unclear.

As systemic organ involvement of IgG4-related disease has been reported, these complications sometimes mimic/require differential diagnosis by organ systems. To date, although several systemic complications of IgG4-related disease, such as the pancreas, lacrimal and salivary glands, kidneys, lungs, retroperitoneum, aorta, and lymph nodes, have been reported [1-4], gastrointestinal complications are quite rare. Moreover, ileus obstruction resulting from colonic infiltration of IgG4- positive mononuclear cells without malignant lesions has never been reported in the literature, except a few cases of colonic involvement in association with cancer [5,6]. Therefore, this is the first case of IgG4-related disease complicated with gastrointestinal dysfunction with obstructive colonic stenosis with IgG4 positive cells resulting in an ileus, which led to removal.

Taken together, it is important to concentrate on previous medical history, particularly when physicians encounter patients with complicated systemic disorders and/or chronic inflammatory diseases, such as IgG4-related disease with long term morbidity, because in patients with unconfirmed disorders, unreported complications may be hidden in their medical histories. Furthermore, accumulation of data concerning long term disease duration and vital complications, such as obstructive colonic stenosis, as in the present case, is required to develop an understanding of these relatively newly defined clinical entities.