A Rare Cause of Diminished Vision: Large Spheno-Ethmoidal Mucocele

Mucoceles are benign, encapsulated, locally invasive masses within a paranasal sinus, filled with mucus and lined by respiratory epithelium. However, the sphenoid sinus is the least common site of the paranasal sinuses, representing 1-2% [1]. The presenting symptoms are primarily caused by compression on contiguous neurological and vascular structures [2]. Diminished vision is a common presenting symptom. The authors report a case of a large sphenoid sinus mucocele associated with ophthalmic symptomatology and headache in order to describe the presenting symptoms, location, and management of this rare disease.

A 45-year-old male, presented with gradual decrease in vision in the right eye and severe headache also at the right-sided for the past six months. There were no associated nasal symptoms. The patient denied any history of paranasal sinus disease or trauma.

A systemic examination was unremarkable. Computed tomography (CT) of the head revealed a large, well-defined lobulated mass, measuring 67 mm × 42 mm × 32 mm arising from sphenoid sinus with extension into the right ethmoidal and compressing the right inferior orbital fissure and the right optic nerve. It was responsible of marked thinning of the internal wall of the orbit without erosion of the bony. There was no evidence of calcification or any fat density within the lesion. The diagnosis of a large sphenoethmoidal mucocele was suspected (Figures 1 and 2). 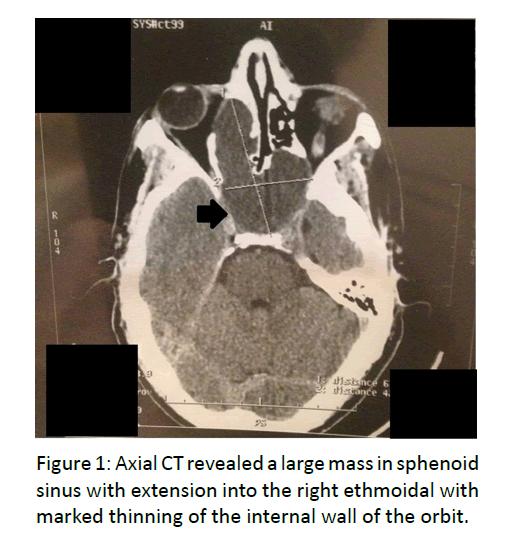 Figure 1: Axial CT revealed a large mass in sphenoid sinus with extension into the right ethmoidal with marked thinning of the internal wall of the orbit. 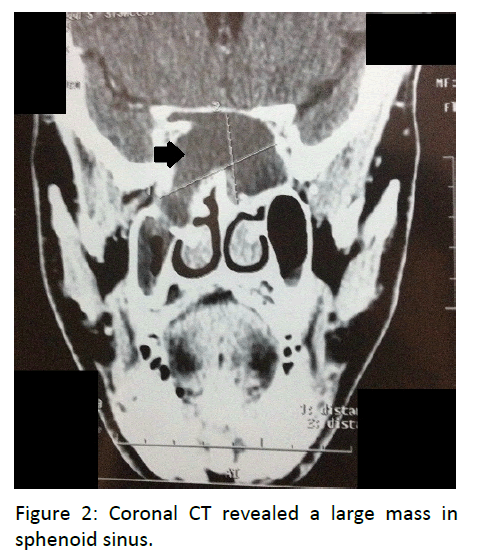 The patient underwent an endoscopic right sphenoidotomy and drainage of the mucocele. The postoperative course was uncomplicated (no bleeding or cerebrospinal fluid leakage). Histopathology was suggestive of mucocele lined with pseudo stratified columnar epithelium. The man’s vision gradually improved after operation. The patient was still free of symptoms with normal vision after six months.

In 1872, Rouge identified the first case of sphenoid sinus mucocele and later described by Berg in 18892. Mucoceles are benign lesions, expansile and locally destructive, causing erosions of the bony walls of the sinus [3]. Approximately two-thirds of all mucoceles are commonly found in the frontal sinuses, and the majority of the remainder involves the ethmoidal sinus [4,5]. The aetiology of sphenoid sinus mucocele is still unknown. Proposed theories for development of mucocele include cystic dilatation of the glandular structures and cystic development of embryonic epithelial residues [6,7]. Furthermore, Trauma and chronic inflammation (polypoid sinusitis) are considered to be causes of mucocele formation [8,9]. In the literature, some authors suggested also that late complication of radiotherapy to the head and neck can causes sphenoid sinus mucocele formation by scarred mucosa which occludes the sinus ostium [10]. Our patient didn’t have any risk factor for the development of a mucocele. The clinical manifestation of sphenoid sinus mucocele is dependent on to the sinus anatomy and its contiguous neurological and vascular structures such as: cranial nerves II-III-IV-V-VI, the cavernous sinus, the carotid artery, the pituitary gland [2]. The most common symptom of sphenoid sinus mucoceles is headache [11]. It can be caused by mechanical pressure on the sinus anatomy; stretching of the dura covering the planum sphenoidale and the floor of the anterior cranial fossa or by cytokines and their role in modulation of the pain threshold, and also in trigeminal sensitization [12,13]. Other visual symptoms include diplopia; ocular muscle paresis; exophthalmus and complete visual loss are reported [7-14]. Computed tomography (CT) and Magnetic resonance imaging (MRI) are the imaging techniques of choice. Mucocele appears like a hypodense non enhancing mass that fills and distorts the sinus cavity on CT, and with a low signal on T1- weighted MRI and a high signal on T2-weighted MRI due to their high water content [15]. Usually, there is no enhancement, or at most marginal enhancement on CT or MRI (T1). The differential diagnosis includes pituitary tumour, craniopharyngioma, epidermoid, chordoma, dermoid, aneurysm, metastatic lesions and arachnoid cyst [16,17]. The recommended management of a mucocele of the sphenoid sinus is endonasale sphenoidotomy with drainage and marsupialization of the mucocele [18]. After six months, our patient reported an improvement in symptoms post-operatively, and showed no recurrence.

Sphenoid sinus mucocele is a rare entity. Imaging is crucial to diagnosis. Endoscopic drainage is safe and effective in eradication of disease. The rarity of sphenoidal sinus mucocele made our case interesting to report.