Objective: Our purpose of this study was to survey about blood, hepatic and renal side effects of dapsone with the patients affected by Pemphigus.

Methods: The test was carried out on 37 patients who were suffering from acute Pemphigus and had undergone some therapy with dapsone amongst which 5 patients were excluded from the research because of hepatic and hematic symptoms. The study was carried on with 31 patients with an average age of 40 ± 17.5. They had no symptoms necessitating the stop of administration of the medicine.

Conclusion: This study indicated that among all disagreements about dapsone treatment, dapsone can be applied as adjuvant therapy.

Pemphigus is a rare group of blistering autoimmune diseases that affect the skin and mucous membranes caused by autoantibodies directed against desmogleins. The immunopathology of the disease is well characterized and the target antigens to which the autoantibodies are directed have been well studied [1].

There are two types of the disease include Pemphigus vulgaris (PV) and Pemphigus foliaceus (PF). Pemphigus vulgaris is the most common form with an incidence from 0.5 to 3.2 cases per 100000 individuals and covers an extensive age range with the peak frequency between the third and sixth decades of life. It usually begins with blisters in mouth, which then often spread out to the skin. Blisters can also break out on the genital mucouses. Pemphigus foliaceus involves crusted sores or fragile blisters that often appear first on the face and scalp and later on the chest and other parts of the body. Unlike Pemphigus vulgaris, blisters do not form in the mouth. The sores are superficial and often itchy, and are rarely as painful as Pemphigus vulgaris blisters [2,3].

Pemphigus is a serious disease that needs to cure as it is almost fatal if left untreated. Although considerable advances have been made in the past decade, but the treatment remains challenging. Current treatment consists of corticosteroids, gold containing drugs, or immune-suppressor medications such as azathioprine and methotrexate, or doxycycline [2,4]. Plasmapheresis and the monoclonal anti-CD20 antibody may be used in addition to the systemic drugs to decrease the antibodies titre in the bloodstream. Unfortunately, the use of high-dose systemic corticosteroids is associated with complications such as osteoporosis and corticosteroid-induced hyperglycaemia [5].

It is reported that dapsone can be used as an adjuvant when patients are not responsive to corticosteroids, or in younger patients to avoid long-term adverse effects of corticosteroids [6].

Dapsone is a chemotherapeutic agent primarily used in treating leprosy, Pneumocystis jiroveci (previously carinii) pneumonia, and malaria. In addition to its antimicrobial function, it is used as an anti-inflammatory agent in the treatment of several conditions. It is the drug of choice in dermatitis herpetiformis, with a response rate of 95-97%. It has been used in many other dermatologic diseases, including pemphigus and pemphigoid [7]. There are different controversial reports about the side effects of Dapsone drugs. It is reported that, because of several potentially harmful adverse effects, dapsone therapy needs careful monitoring. The most common pharmacologic/toxic adverse effects are mainly hematologic such as methemoglobinemia, haemolysis, and anaemia. However, some results have showed that in compared with corticosteroids, the adverse effect profile of dapsone is far less serious and in most instances they are reversible [6]. Despite the beneficial therapeutic effects of this medicine, it is rarely prescribed, due to concerns of the physicians about these side effects. The purpose of this study is to survey about hematologic, hepatic and renal side effects of dapsone with the patients affected by Pemphigus vulgaris and Pemphigus foliaceus.

The data for this prospective study were collected during a period of one year (May 2012 to May 2013) among cases in Tehran. Written consents were obtained from each participant, and the study was approved by the medical ethics committee of Tehran University of Medical Sciences.

The patients with Pemphigus vulgaris or Pemphigus foliaceus should provide complete medical history including laboratory tests and clinical examination documents signed by a physician with expertise in dermatology conditions. We also prepared questionnaires to get information about their ages, genders, kinds of pemphigus, skin symptoms, the affected area, family disease history, background and their previous treatments. In this survey, patients suffering from acute anaemia, lack of G6PD in Favism disease, pregnant women who suffered from hepatic and renal diseases or the presence of a serious disease of any other etiology apart from Pemphigus and also patients are allergic to dapsone were excluded.

In our investigation the side effects of using dapsone in the patients over 15 years of age suffering from Pemphigus vulgaris or Pemphigus foliaceus in a period of one year therapy referring to dermatology clinic of Razi hospital was studied.

The number of patients under study was 37. Some were excluded, out of which 3 patients were because of the increase in hepatic enzymes, one patient due to leukocytosis and reticulocytosis, another for reticulocytosis and one patient who passed away. The average age in patients suffering from pemphigus was 40 with a deviation standard of 17.5.

Bloods were obtained from the patients by venipuncture technique without any anticoagulant, and the tubes were codenamed to observe the anonymity of patients, and the serum was immediately prepared by high-speed centrifugation (2500 Xg). After exclusion of two samples due to haemolysis, the quantitative measurement of serum biomedical markers were performed on fresh serum samples. Blood cells count (RBC and WBC), Haematocrit (HCT), Platelet (PLT), and Haemoglobin (Hgb) were measured by an auto-analyser (SYSMEX, America). GPT and GOT enzyme, Urea, Blood Urea Nitrogen (BUN), Alkaline Phosphatase (ALP), Bilirubin (Total and Direct), Creatinine, and Fast Blood Sugar (FBS) were measured by an automatic biochemistry analyser (BT3000, Turkey). Reticulocyte counts were performed manually by looking at a specially stained slide under the microscope and counting the number of reticulocytes in a number of fields of view.

All data were reported as mean ± Standard Deviation (SD) and analysed by Statistical Package for Social Science (SPSS) software version 16. Data distribution was determined based on Kolmogorov-Smirnov method and p value less than 0.05 was defined as significance threshold.

Out of 37 patients suffering from pemphigus (4 pholiace and 33 volgaris), 3 cases were excluded from the study because of the increase in hepatic enzymes. Three patients were excluded include; (a) a 29 year old man due to reticulocytosis (7.5%), lukocytosis (16000) and haemolysis, (b) a 22 year old man due to reticolocytos (7.5%) and (c) a 52 year old woman, who already suffered from thrombocytopenia, anaemia, giardiasis. No other serious side effects were observed in any other patients (18 women and 13 men). The age range was from 18 to 78 years with an average mean of 40 and a standard deviation of 17.5. The most affected areas in the skin were the trunk, chest, belly and back (50%) and the most affected mucouses were mouth (86.4%) and nose (50%). In the process of disease, the face and scalp wrinkle were more affected in men but the trunk in women. But in none of the mentioned cases serious statistical deviations were seen.

Blood markers measurements are listed in Table 1. Although, HCT, HGB, RBC, WBC-E, WBC and PLT were decreased after dapsone-treatment of patients but statistical analysis revealed that PLT was only showed a significant difference (P<0.05). It was also found that treatment caused an increase in reticulocyte count, but the increment is not statistically significant.

Table 1: The comparison of blood markers between before and after treatment.

As listed in Table 2, despite of a seeming increment in ALP, GPT, BUN and UREA and a decrease in FBS and GOT markers, but there is no any significant differences between investigated hepatic markers.

Table 2: The comparison of hepatic markers between before and after treatment.

Regardless of rises in BILI-T, BILI-D and CART and decline in blood pH, no significant difference was found in analysed renal makers as shown in Table 3.

Table 3: The comparison of renal markers between before and after treatment.

The comparison of percentage of each biochemical factor before and after treatment with dapsone in patients suffering from pemphigus revealed that dapsone had no significant effect on studied markers during of treatment and level of all markers were maintained at normal ranges as shown in Figure 1. 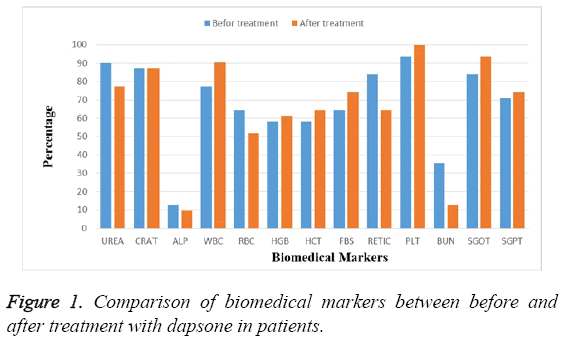 Figure 1: Comparison of biomedical markers between before and after treatment with dapsone in patients.

Dapsone, diaminodiphenyl sulfone, is successfully used as a drug to treat various skin diseases for many years. The drug has successfully applied in the treatment of pemphigus alone or with systemic corticosteroids for the limited patients in the past few years [6]. But these studies were not comprehensive and well-controlled. Despite of this fact that dapsone has used by millions of patients around the world, without serious complications, but careful monitoring of patients during of the treatment is necessary due to several injurious adverse effects caused by dapsone therapy [8,9]. In is recommended that urine analysis, cell blood counts, G6PD deficiency, and renal and/or liver failure must be checked before dapsone therapy. In addition, during treatment, cell blood counts like reticulocyte, leukocyte and platelet to be regularly monitored at certain times under supervision of a physician [6].

In this study, we monitored the changes in haematological parameters in patients suffering from pemphigus vulgaris and foliaceus before and after treatment with dapsone. According to the results, with the exception of a decreased in the number of platelets in patients after treatment, other blood factors have not significantly changed. In consistent with our findings, other investigations are also elucidated that the by-stander effects associated with treatment at doses <100 mg are commonly not severe [8]. Although, our study shows that the dapsone therapy has no effect on RBC and haemoglobin levels, but there are some reports that the most common by-stander effects of dapsone are methemoglobinemia, haemolysis, and anaemia [7,9]. Haemolysis happens in a dose-dependent manner, and is measurable at >50 mg per day of drug reception [9]. In the other study on 100 leprosy patients receiving 100 mg drug per day, a 2 g/dl decline in haemoglobin level was observed [10]. Despite of little clinical importance of methemoglobinemia in long term dapsone-therapy of healthy patients, however, without a cautious monitoring and, co-administration of high doses of corticosteroids, the adverse effects are often catastrophic and can potentially lead to death. It must be emphasized that, in contrast of corticosteroid-side effects, the adverse effects of dapsone therapy are less perilous and in most cases are returnable. To reduce haemolysis raised by dapsone therapy, the drug should not administrate more than 100 mg and 50 mg in G6PD-normal, and G6PD-deficient individuals, respectively [7]. It is found that the co-administration of cimetidine, a metabolic inhibitor of dapsone, reduces the anaemia via decrease in hepatic oxidation of dapsone to hydroxylamine [11-13].

Another severe but rare-event side effect of dapsone is hypersensitive reactions. Hypersensitivity reactions consist of rash, fever and lymphadenopathy with various degrees in different organs which known as Drug Reaction with Eosinophilia and Systemic Symptoms (DRESS syndrome). Therefore, allergic symptoms of dapsone can lead to appearance of DRESS syndrome [14].

Less frequent side effects of dapsone have been reported such as photo-sensitivity, hepatic and renal failure, Stevens-Johnson syndrome, hypo-albuminemia, hypo-thyroidism, and a slight gastrointestinal discomfort [7-9].

The authors are grateful to the persons who worked in Razi hospital laboratory for helpful assistance during the experiment.

The authors have no conflicts of interest that are directly relevant to this work.