Background and objective: Bleeding in neonates is a significant cause of morbidity and mortality in the neonatal period. The early identification of bleeding and its cause is very important for the appropriate management and for prognostication. The relative paucity of Indian studies on bleeding in newborns prompted us to do this study looking at Clinical Presentation, aetiological Profile, Immediate Outcome, and Short Term Follow up of Bleeding Neonates. Methods: This prospective study was done in NICU of a tertiary care hospital in Bihar, between February 2013 to august 2014. A detailed history, family history, perinatal problems and thorough clinical assessment, relevant investigations were done when required, for all the 70 neonates who had bleeding manifestations out of 1803 admissions, during the same period. Immediate outcome, i.e., survival or death and developmental assessment at 6 months of age in the survivors was done. Results: The incidence of bleeding neonates was 3.88%. Preterm infants had a higher incidence of bleeding 18.57% (p<0.001).Very low birth weight babies had an increased risk of bleeding (p<0.01). Out born babies were at higher risk of bleeding 88% (p<0.01). 71.43% of the neonates had bleeding manifestation between the second and seventh day of life. Disseminated intravascular coagulation constituted the major cause of bleeding (55.7%). Septicemia with DIC contributed 65.22% of cases of death. The outcome of early and classic VKDB was excellent whereas it was dismal for late VKDB. Vitamin K prophylaxis has an important role in the prevention of VKDB.

The human haemostatic system is dynamic and is profoundly influenced by age [1,2]. The haemostatic mechanism in the neonate differs from that in the older child. In neonates, there is decreased activity of several clotting factors, diminished platelet function, and suboptimal defense against clot formation [2,3]. Neonatal hemorrhage either localized or generalized has significant morbidity and mortality [4]. The identification of the cause of bleeding is very important for the appropriate management and for prognostication [5,6]. The presence of a bleeding disorder can be suspected by the following symptoms: Cephalhematomas, bleeding-following invasive procedures, facial purpura following birth – that is usually associated with severe platelet dysfunction or thrombocytopenia, delayed cord separation and persistent oozing from the umbilical stump is typical for infants with defective fibrinogen production or function and FXIII deficiency. Intracranial Hemorrhage (ICH) may be the clinical presenting symptom of a severe coagulation factor deficiency like hemophilia.

To evaluate the clinical presentation, aetiological factors and to correlate the birth weight, gestational age, sex, place of delivery, perinatal factors with the incidence of bleeding and to study the immediate outcome and short term (6 months) follow-up of those neonates.

This prospective study was done in NICU of a tertiary care hospital in Bihar, between February 2013 to August 2014. A detailed history, family history, perinatal problems and thorough clinical assessment, relevant investigations were done when required, for all the 70 neonates who had bleeding manifestations out of 1803 admissions, during the same period. Immediate outcome i.e., survival or death and development assessment at 6 months of age in the survivors was done.

The incidence of bleeding in neonates was 3.88%. VLBW babies (15.9%), preterm babies (11.5%) and out born babies (4.6%) had a statistically significant risk of bleeding. 71.43% of neonates had bleeding in the first week of life. DIC constituted the major cause for bleeding (55.7%) and VKDB constituted 17%. Nearly 2/3rd cases of VKDB were classic VKDB. 10% of NICU deaths were in the neonates with bleeding. Bleeding constituted a significant risk factor for mortality in NICU. Out of forty-seven survivors, 32 cases were normal in the neurodevelopmental and physical outcome, 7 cases were lost to follow-up and developmental delay was noted in 6 cases. The outcome in the VKDB was dismal (67% mortality and 33% neurologic sequelae) (Table 1 and 2) (Graph 1-3).

Table 1. Aetiology of bleeding and its relation to gestational age 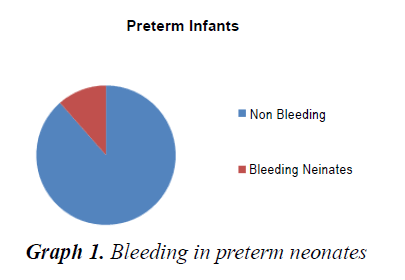 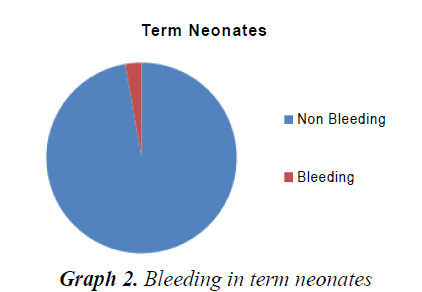 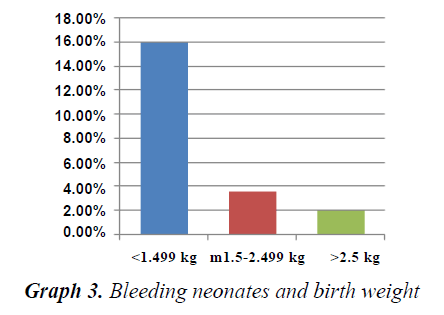 The present study was conducted in NICU tertiary care hospital in Bihar, between February 2013 to August 2014. In our study, the incidence of bleeding in neonates was 3.88%. In a similar study done in India by Arutsivasakthi et al. [7], the incidence was found to be 5.2%. Whereas in a study done by Hathway et al. [4] the incidence was 1%, which is much lower than ours, which shows that various factors like geography, cultural practices, good obstetric practices, low incidence of sepsis, artificial feeding which is known to prevent VKDB, better quality of neonatal care, contributes to lower mortality in advanced countries. We found that sex factor did not influence the incidence of bleeding among the neonate (p>0.05). However, preterm infants had a higher incidence of bleeding 18.57% (p<0.001). This is similar to the findings of Hathaway that sick preterm do bleed excessively owing to many pathological conditions that may complicate easily [1]. The reason could be immaturity of hemopoietic system and capillaries as well as their susceptibility to various insults like hypoxia, hypothermia, and infections. We also found a significantly increased risk of bleeding in Very low birth weight babies (p<0.01). Perlman et al. [8] in their study also had a similar finding that preterm and VLBW babies and IUGR neonates are highly susceptible to coagulation abnormalities. The incidence of bleeding was found to be higher in out born babies-88% (p<0.01). This is reflective of the poor quality of obstetric care and perinatal care in peripheral centers.

In our study, 71.43% of the neonates had bleeding manifestation between the second and seventh day of life. This finding can be explained by the immaturity of the neonatal haemostatic system and their vulnerability to perinatal factors. Disseminated intravascular coagulation constituted the major cause of bleeding (55.7%). Septicemia was responsible for 70% and hypoxia in 27.5% as a causative factor for DIC. Most of the septicaemic babies had Gram negative sepsis (78.8%).This is similar to findings of Tallur et al. [9]. and Mishra et al. [10], where Klebsiella was found to be the commonest organism followed by Pseudomonas. The sick neonates are more prone to develop DIC because of decreased synthesis of coagulation factors, underdeveloped reticuloendothelial system and tendency to develop hypoxia, acidosis and shock [2,5]. VKDB is another important cause of neonatal bleeding and constituted 17% of bleeding neonates in our study. Among patients with VKDB, Classic VKDB was seen in 2/3rd of cases. Surgical conditions like GI perforation and malrotation with volvulus, NEC can present with bleeding manifestations. Hereditary coagulation disorders can also present during the neonatal period, though they are less commonly seen. One case had a family history of hemophilia and presented with subgaleal hemorrhage after vacuum extraction. The other case with factor XIII deficiency had umbilical bleeding. Lack of prophylactic administration of vitamin K was an important risk factor for VKDB.

Overall as far as the site bleeding is concerned, GIT topped the list. Pulmonary hemorrhage was more common in VLBW babies as a part of DIC.

A good clinical assessment, coupled with a screening test (CBC, PT, aPTT, FDP) can help in arriving at a proper diagnosis in most of the cases. The coagulation parameters should be interpreted based on the normal values for gestational and postnatal age.

In our study 23 of 70 bleeding neonates died, giving a mortality figure of 9.27%. It was found that when bleeding was a clinical manifestation, the mortality was statistically significant (p<0.01). Septicemia with DIC was the commonest cause of mortality, contributing to 65.22% of death. Tallur et al. [9] and Mishra et al. [10] have observed that septicemia was responsible for death in bleeding neonates in 47.52% and 61.7% of cases respectively [9,10].

In our study, there were 3 cases of late VKDB and of them, 2 presented with intracranial hemorrhage and 2 of them died (66.6%) and the one that survived was left with a severe neurological handicap. In other studies, in contrast to late VKDB, the outcome of early and classic VKDB was excellent. Out of 3 cases of late VKDB, 2 died giving a mortality of 67% and the one who survived had developmental delay. Hence routine vitamin K prophylaxis should be administered to all new-borns at birth.

Preterm, IUGR, outborn babies, sick neonates have a higher incidence of bleeding. Bleeding is more commonly seen in the first week of life. Late VKDB had a bad prognosis. Vitamin K prophylaxis has a significant role in VKDB prevention. We also found that the outcome in perinatal asphyxia with bleeding depends on the severity of HIE rather than bleeding manifestation alone.

We, therefore, conclude that early recognition and rapid intervention can significantly improve outcome in bleeding neonates.