Solpugids are an order of hunter arthropods. They do not have poison glands or sting, but they can hunt animals larger than themselves using their powerful and large chelicerae. Due to their aggressive behavior and scary look, solpugids cause fear and horror in humans. Given the importance of solpugids in terms of causing fear, discomfort and the possibility of infection in case of biting, determining its species was noted in Kashan. This study was a descriptive research. Sixty five specimens of solpugids collected from homes and dormitories in Kashan City by hand-collecting method and were transferred to laboratory. All specimens had been collected from public and commuting places. The collected solpugids were preserved in 70% ethanol and were identified using special and valid keys under stereo-microscope in the laboratory. It was shown that at least 3 species of solpugids from Rhagodidae, Galeodidae and Gylippidae families exist in Kashan. Among 65 solpugids collected, 51% were identified Galeodes caspius, 41.5% Gylippus lamelliger and 7.5% Rhagodes melanochaetus. At least 3 species of solpugids live in 3 families in Kashan that sometimes penetrate the houses and dormitories. Thus, it is recommended that citizens be trained about the importance of these animals in ecosystem and that they know that these animals are not toxic.

Animals to defend themselves, cause pain and suffering to their enemies by biting or injecting poison. Animals’ defense also causes fear in humans. Phobia or intense fear is a phenomenon that disrupts many people’s life consciously or unconsciously. Arachnids are an important group of arthropods that a large number of them live alongside humans. Fear of arachnids is common among different communities [1-3]. Apart from arthropods, other animals cause fear and discomfort in humans. Fear of reptiles and arthropods may be due to their being toxic or major damage to human body [4-7]. Fear of poisonous animals is a routine or common practice since some of them are poisonous and causes dangerous side effects even death in human. Scorpions are among the arthropods that have caused more damage and discomfort and death to humans compared to other poisonous biting animals in Iran and are active from north to south of the country [8-13].

Solpugids are considered among arthropods that are of great importance in ecological balance. Their bodies are composed of two parts, cephalothorax and abdomen. Also, they have powerful chelicerae that are used in tearing prey. Their size ranges from 12 to 15 cm. They have very large pedipalps that almost always are larger than the front legs. Solpugids have four pairs of legs. Most solpugids live in desert areas and tropical locations. These animals are active at night and hide in holes during the day [14,15]. Some species of them are active during the day. Their most activities have been reported from June to July [16,17]. They feed on insects and worms, scorpions, lizards and small animals. They have very large pedipalps that are very effective sensory organs and play an important role in detecting prey or food. The pedipalps of these animals have different papillae and hairs that are various in different families. They play a basic role as mechanical and chemical receptors [18,19]. Solpugids have so powerful Chelicerae that they can easily hunt preys larger than themselves. Of course, the power of each species is different from that of others. Therefore, their ability in hunting preys is different, too [20].

Solpugids contain one thousand known species and 153 genera. Only in America 196 species of them have been identified [21-23]. Solpugids live mostly in warm and dry or desert areas. They show more activity in temperate regions during spring and summer [24]. Solpugids are not dangerous and threatening and only in rare cases such as being threatened by humans, they may bite or produce voice. These animals bite, like other poisonous and nonpoisonous animals increases the risk of infection. These animals are not poisonous and only in one case, in India, it has been reported that one species of the Solpugids is poisonous and that its poison has led to the rat’s death. Of course, no other reports have been presented in confirming this report [25]. Given the importance of solpugids in terms of causing fear and discomfort and the possibility of biting humans and their abundance in tropical zones such as Kashan City; Central Iran; identification of different species of these arthropods was for the first time conducted in this region.

Kashan is located in central plateau of Iran. The main feature of this area of Iran regardless of being connected to heights and some independent domestic areas is that it has warm-dry climate and its features are cold-hard winters and hot-dry summers. Kashan region has an area of 5000 square kilometers and is located on the edge of Iran`s central desert, that is, on one side, it is surrounded by mountains and, on the other side, it borders the plains. It is 945 m above sea level with geographical coordinates of 51º east and 33º, 59" north latitude. Kashan is limited to central desert salt lake and Aran- Bidgol County to the north and to Natanz and Maymeh Counties to the south, to Kavirat region to the east, and to Delijan County in the Central Province to the west. Temperature reaches 50°C above zero in desert areas in summer and the annual rainfall on average ranges from 100 to 150 mm. In summer the sunshine raises the surface temperature of the earth up to 70°C, while at night it reduces rapidly and reaches 15°C or even lower.

This descriptive study was conducted during 2014 and 2015 and 65 specimens from 5 areas including Ravand, Fin, Lathore, dormitories of Kashan University of Medical Sciences and Islamic Azad University and Kargar street in different geographical locations of Kashan City were randomly hunted and collected by hand-collecting method. All specimens were put in the lidded container using forceps and were transferred to laboratory after registering the profile and history. The specimens were put into special bottles in 70% ethanol. Then, the solpugids were identified using special and valid keys [26-29] under stereo-microscope. Meanwhile, the specimens were also compared with the original descriptions of species. The information obtained from solpugids such as hunting location was sorted. The data were drawn using tables and so charts, then the results were compared. 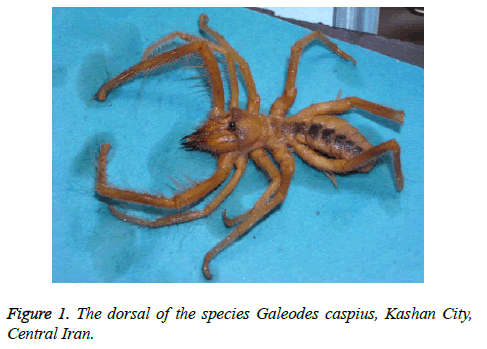 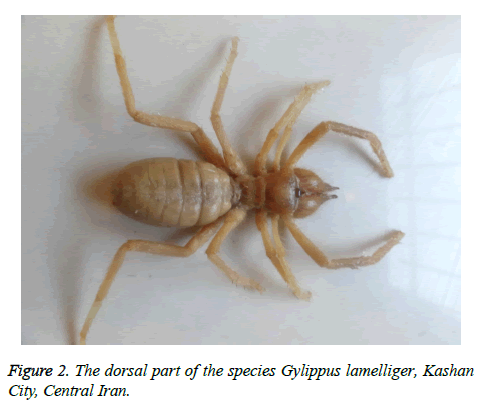 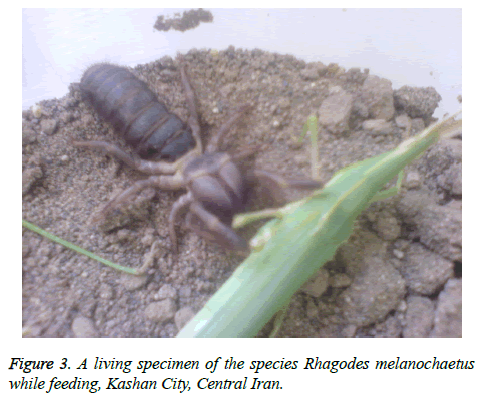 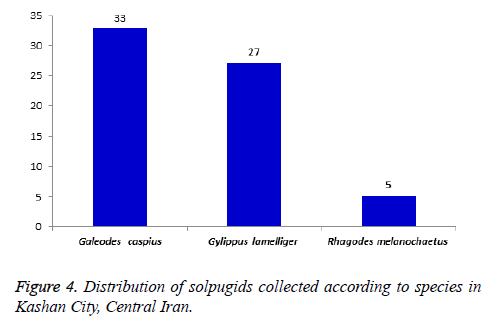 Figure 4: Distribution of solpugids collected according to species in Kashan City, Central Iran.

The highest number of solpugids, that is, almost 40% of them were collected from around the dormitories of Kashan University of Medical Sciences and Islamic Azad University that are slightly apart (Figure 5). This study only consisted of solpugids that had left their main location and habitat or place of birth to feed or do other activities. All specimens were collected after being observed or entering the residential houses or around the houses. Meanwhile, all specimens were collected from March to October. The highest abundance belonged to months from June to August. 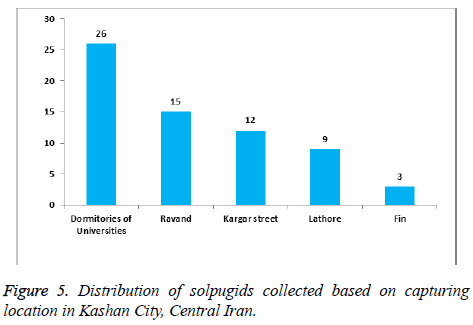 Results showed that three families of solpugids, that is, Rhagodidae, Galeodidae and Gylippidae exist in Kashan City. The active species of this region consist of Galeodes caspius, Gylippidae lamelliger and Rhagodes melanochaetus. This is the first documented report that has been presented about these animals. Other studies have been conducted that confirm the presence of numerous species of these animals [30-32]. This study only consisted of solpugids that had left their main habitat or birth location for the purpose of feeding or other biological activities. All specimens were collected around the residential houses or while entering the houses. It is suggested that in case of conducting a careful and active study on the main habitats of these animals, more species will be added to above-mentioned list. Researchers have reported different species of these animals in other countries such as America, Mexico, Brazil, Afghanistan, Turkey, Myanmar and India. In neighboring countries, some studies have been carried out but it seems that the study of these animals is less, compared to other animals [21-23,33-36].

Solpugids are considered predator arthropods that easily feed on different animals including scorpions and these two animals usually live in common habitats and considering the point that these animals can enter the house in the urban fringe areas and rural areas, they may cause panic and discomfort or probably bite the people [37,38]. Solpugids sometimes become aggressive and produce sounds. They may bite for self-defense. Since their chelicerae are very powerful and cause wound. Like all other bites by other animals including poisonous and non-poisonous snakes, the infection of these wounds causes infection with microbial agents of the soil or oral flora. Thus, through solpugids biting like other animals, it is possible that the wound be infected with viruses, bacteria and fungi [39-44]. The surface flora of venom injection apparatus of marine and aquatic animals in addition to poisoning can cause local or systemic infection in human. So infection is possible in human by being bitten by any animal [45,46].

People in Iran believe that when solpugids move on the ceiling, they drop themselves down and bite people through their abdomen and cause death. In some cases revenge malice are attributed to these animals and people say that this animal hides itself inside a large hole beside old wooden doors and awaiting for the body of the victim to be transferred outdoors and then the solpugids returns to its nest or after biting, it goes to the cemetery and waits for the victim. These beliefs are certainly superstitious that root in people`s ignorance or lack of awareness and does not have scientific basis [47-49].

Lack of awareness about the life of this animal has caused an unfounded fear of it that since the distant past has caused fear and anxiety in people. On the other hand, due to having powerful chelicerae, in case of biting they may cause deep wounds that become infected. Through training the biological characteristics and behavior, their probable losses could be presented to people. Pseudo phobia or fear of the arthropods could be reduced through attending the meetings run by experts in this field.