With huge quantity of patient’s medical images to be shared between specialists and clinics for improving medical diagnosis, need for privacy protection of patient details has increased. To achieve this, care must be taken that during reception, image quality must be preserved and retrieved image should be error free. In this paper, a unique concept of tiling has been used on image patterns using visual cryptography to achieve privacy preservation. The medical image is partitioned into frames using the concept of rhombus and in the deformed image tiles are formed within the different partitions, which are transmitted along with encrypted stegano-tiles. The reconstruction of original image is obtained by stacking the tiles and this error free methods performance is tested using multi scale structural similarity index and CUDA enabled GPUs.

A tiling can be periodic or non-periodic and periodic is one in which image can outline a region that tiles the plane by translation that is, by shifting the position of the region without rotating or reflecting it. Original image and the tiled image are in the same size. Hwang proposed the efficient watermark method based on Visual Cryptography (VC) and the watermark pattern can be retrieved without any information about original image [1]. Qi proposed a method to recover the secret image which is lossless [2]. Soman et al. proposed two XOR-based VC algorithms, viz., XOR-based VC for general access structure and adaptive region incrementing method [3]. Ananth et al. proposed research design that implements a barcode encoder based steganography method [4]. Linju et al. proposed the sealing algorithm where two secret images are sent at the same time by converting them to halftone representations [5]. Deepika et al. proposed a scheme to share a secret among ‘n’ participants, i.e. an ‘n’ out of ‘n’ secret sharing scheme, based on a new number system called Permutation Ordered Binary (POB) number system and Chinese Remainder Theorem (CRT) [6]. Niimi et al. proposed a method for preserving privacy in electronic health record [7]. Parallel cryptosystem is introduced, using which all subtiles are transmitted at the same time and in, an algorithm to for encryption of secret images into meaningful images is proposed [8,9].

The proposed privacy preserving method is achieved by partitioning the medical image by tiling, applying stegano algorithm followed by simple encryption which is decrypted in receiving end as shown in Figure 1. 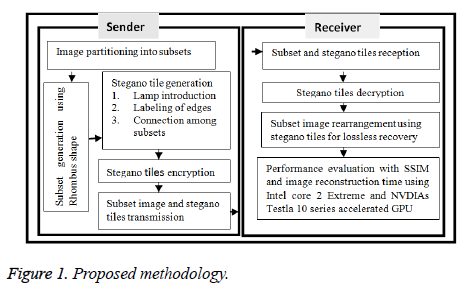 Partitioning the medical image by tiling

Tiling is a way of arranging identical plane shapes, so that they completely cover an area without overlapping. The rhombus based partition is placed over the secret image. The secret image is divided into six subsets based on the angles used in Figure 2 and partitioned as shown in Figure 3.

Figure 2: Rhombus and its application to the secret image.

Figure 3: Partitioned subset (listed from 1 to 6 in order).

The steps for stegano algorithm are given by:

• Label the edges of the subsets as Hik, i=1 to L (number of subsets) and k=1 to number of edges in ith tile.

• The connecting among subsets specified in the stegano tile. 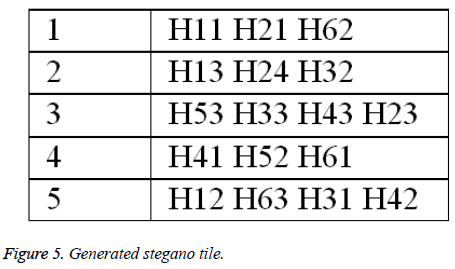 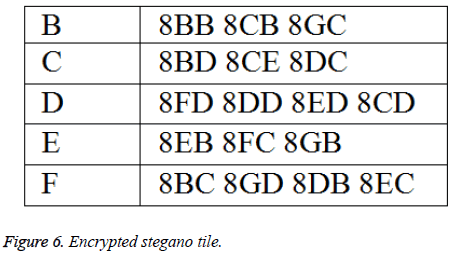 The proposed algorithm is tested on the CT image (Figure 7) which is partitioned based on the procedure in Figure 3. 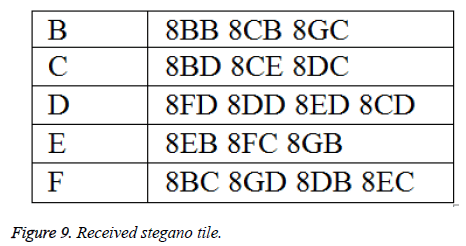 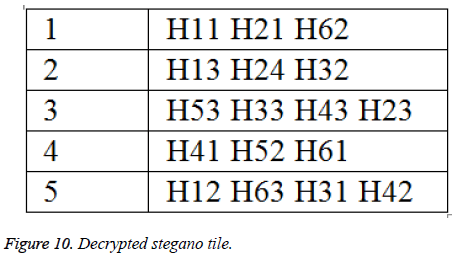 Figure 11a: Procedure for reconstruction of transmitted medical image in receiving end.

The proposed algorithm was tested on the 4 CT medical images (obtained from www.aylward.org/notes/open-accessmedical-image-repositories) and the reconstructed images are compared with original images in terms of Multi-scale Structural Similarity Index (SSIM). Table 2 shows the SSIM obtained for the 4 test images.

The proposed method is not dependent on the order of arrival of tiles like the conventional method as in Figure 12 (a). NVIDIA’s Tesla GPUs reconstruction time performance of the partitioned subsets using encrypted stegano tile was found to be only 72 seconds against 368 seconds taken by Intel’s core 2 Extreme as shown in Figure 12 (b).

In this paper as reconstruction of original medical image is done by stacking the stegano tiles, it is an enhanced privacy preserving lossless technique for e-health applications. The method is easy to implement and does not need complicated cryptographic computations. The received images are found to have multi scale structural similarity nearing 1. The reconstruction time was also found to be very less when CUDA enabled GPUs were used. Future work is to concentrate on other efficient tiling shapes and use other Testla processors for faster reconstruction time.

The authors would like to thank Pondicherry University for allowing access to CUDA enabled GPU computing facility for the research work.