Gait analysis to recognize the activity movements using wearable sensors is a cost effective, convenient, and efficient way of providing useful information for various applications in geriatrics, assessment of the performance of athletes in term of medical application and so on. In this paper, an attempt has been made to classify simple activities such as walking, running etc. In order to capture the movements, a Bluetooth Arduino microcontroller fitted with a tri-axial acceleration sensor was employed. The Arduino was programmed to record the readings of the acceleration sensor that works in collaboration with the user’s smartphone or PC/laptop. In order to analyse the device performance and enable it to classify the activities correctly, Naive Bayes classifier was used. This device is fitted into the footwear of the user before the user performed the activity. Four protocols were considered for this analysis, namely walking, running, falling in the forward direction and falling in the backward direction. Five healthy adults were requested to perform this experiment. The results were consistent in the different environments considered and the device showed an overall accuracy of 90.67%. The average acceleration sensor reading in the walking scenario was found to be 0.287, 1.104 in the running scenario, 0.824 in the falling forward scenario and -0.779 in the falling backward scenario.

Studying the human locomotion in a systematic way is the gait analysis that comprises the measurement, depiction and assessment of quantities that distinguishes the human locomotion [1]. With gait analysis, the gait point can be determined, the kinematic and kinetic factors of the gait event of a human can be identified and the function of musculoskeletal can be accessed quantitatively [2]. Finally, the gait analysis has been used in various areas such as rehabilitation, health diagnostics and rehabilitation [3]. For instance, in certain kinds of sport training, the technique is employed to recognize the mistakes in athlete performance thus that they can correct. In rehabilitation and orthopedics, it is used for patient monitoring so as to check their health progress. With the interesting characteristics, the gait analysis has been attracted widely by the researchers and clinicians. The classification of movements can be of great aid in a large number of cases, most importantly in the analysis of gait. So this paper used the Naive Bayes as the classifier method for gait analysis [4]. The emergence of Internet of Things (IoT) devices can drastically improve the quality of living and provide assistance and aid to those in need [5]. Moreover, supporting technologies such as Bluetooth low energy have made the development of such devices much cheaper and more power efficient [6]. This paper aims to design and develop a low cost and smart system that can help in detecting and classifying activities performed by the user [7]. In order to achieve this, a Bluetooth Arduino microcontroller that uses Bluetooth low energy connection is used. In order to detect the movements, an accelerometer embedded in the device is used. In this paper, Section II discusses the Literature Review, Section III elaborates on the block diagram followed by the working methodology in Section IV. The results are discussed in Section V and Section VI concludes the paper

In Figure 1, the first step is the attachment of the Light Blue Bean to the user’s footwear. In the home environment the device can be attached to an ankle band that has to be worn by the user. After the attachment, Bluetooth low energy connection has to be established between the device and the user’s smartphone or laptop. 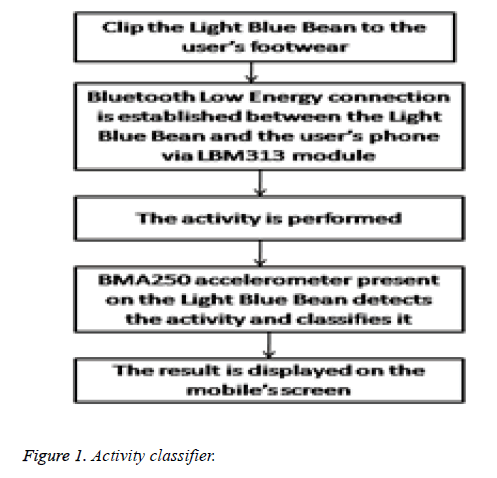 The third step is to perform the activity. In this case, the activities considered are running, walking, falling forward and falling backward. The BMA250 acceleration sensor senses the acceleration in the three axes. When each of the above activities is performed, the reading with respect to the x axis undergoes a distinct change. With the help of the observed acceleration values and the Naïve Bayes Classifier, the activities are classified. The result is then displayed on the user’s PC/laptop/smartphone. Activity Classification Protocol.

For implementing the proposed solution, the Light Blue Bean is used. The Light Blue Bean is a Bluetooth Arduino Microcontroller that uses the AtMega328p Arduino Microcontroller and the LBM313 Bluetooth module. Bluetooth low energy connection is preferred as it consumes much lesser power than Classic Bluetooth Radio. This is because the host is allowed to sleep until it has to perform an operation [8]. The AtMega328p module is used to program the device to record the accelerometer values. Additionally, the Light Blue Bean is embedded with a BMA250 accelerometer which is a triaxial acceleration sensor that records the acceleration in the x, y and z axes. In order to analyse the device performance and classify the activities, Naive Bayes classifier is used. Naive Bayes classifier was chosen as it gives good results even for a small number of observations. Forty data points are considered for each scenario and testing as well as training is performed. To ensure that there is no bias, cross validation is performed [9]. The Naive Bayes Classifier is simple to implement and shows better F Measure, AUC and Accuracy when compared with the Decision Tree [10]. The following four parameters are used to estimate and analyse the performance; Accuracy (ARY), Specificity (SPY), Sensitivity (SEY) and F-Measure (FMR) [11]. The AUC is computed using the receiver operating characteristics. AUC is an important measure because it is independent of any bias that may exist [12].

Five subjects were requested to perform the experimental protocol. The Light Blue Bean was attached to the footwear of the subjects and Bluetooth low energy connection was established between the user’s smartphone and the device.

Protocol 1: The subjects were requested to walk in a free lab environment and the accelerometer readings were recorded for ten sec.

Protocol 2: The subjects were asked to run in a free lab environment and the accelerometer readings were recorded for ten sec.

Protocol 3: The subjects were requested to fall in the forward direction. The accelerometer readings were recorded for ten sec which included the falling motion as well as the duration the subject remained on the floor.

Protocol 4: The subjects were requested to fall in the backward direction. The accelerometer readings were recorded for ten sec which once again, included the duration the victim remained on the floor.

The representative fall backward and fall forward scenarios are shown in Figures 2 and 3, respectively. The X-axis is the time for the protocol and Y-axis is the X axis acceleration sensor reading value in raw format. One unit of the raw reading corresponds to 3.91 × 10-3 g. The average value of acceleration in the x direction in the falling backward phase for the representative subject is -0.779 and that in falling forward is about 0.824. 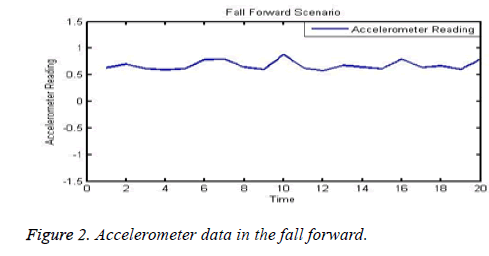 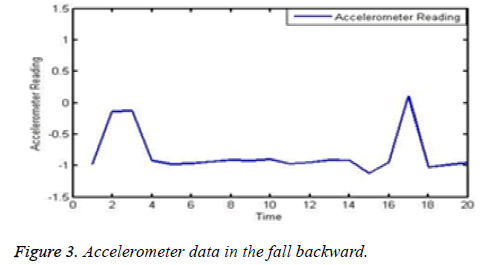 Figures 4 and 5 represent the accelerometer data in the walking and running scenarios respectively. The average values of the accelerometer readings are in the running scenario is 1.104 and in the walking scenario is 0.287. The average value for walking, running, falling backward and falling forward across all subjects is represented as a scatter plot in Figure 6. There is a clear demarcation of the value in each region.

Figure 4: Accelerometer data in the walking.

Figure 5: Accelerometer data in the running.

The statistical values with minimum, maximum values as well as the mean and standard deviation for four scenarios considered, namely, walking, running, fall backward and fall forward are represented in Table 1.

Sensitivity is the ability of the test to identify the class correctly among other classes belonging to the considered dataset.

Here True positive is correctly identified and false negative is incorrectly rejected. Specificity is ability of the tests to exclude a condition correctly.

Where true negative is correctly rejected and false positive is incorrectly identified. The classification accuracy is directly proportional to the correctly classified objects and it is determined by the following formula.

Area under ROC (Receiver Operating Characteristic) Curve (AUC): AUC is a single-value amount that ranges (0-1). The ROC curve is taken to distinguish the trade-off between true positive rate and false positive rate. A classifier that offers a large area in the curve is preferable over a classifier with a smaller area under the curve. A perfect classifier provides an AUC that equals 1. Figure 8 shows the AUC measure for classification techniques to classify the gait posture of the persons. The AUC measure attained by the proposed classifying technique is higher than the ADL and C4.5 classifier. 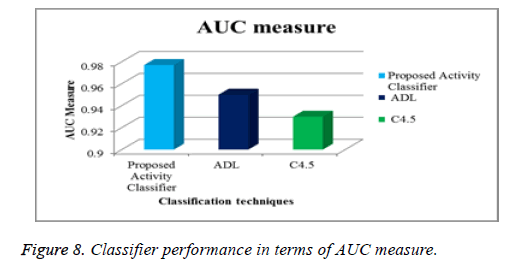 The results are appearing to be highly significant in all the four cases. Hence, this feature from the accelerometer appears to be suitable for this analysis.

This paper aimed to develop a smart, low cost device that could classify basic activities. The working was based on the use of a tri-axial accelerometer clipped to the footwear of healthy adults. This device can be used in both indoor and outdoor environment. The automated system gave an overall accuracy of 90.67%. The assumption was that the user’s feet were at ground level throughout the experiment. By trying out a wide range of new scenarios and with more number of subjects can improve the reliability and robustness of the system. In the future, this system can be used for detecting a fall or the analyzing the speed or gait of athletes and so on.