We explored the clinical characteristics, risk factors, pathogen species spectrum and antifungal susceptibility of non-albicans Candida fungemia in very low birth weight (VLBW) infants in a neonatal intensive care unit (NICU). The retrospective study was conducted on 492 VLBW infants who were admitted to NICU at the Maternal and Child Care Hospital in Shenzhen, China from January 2008 to December 2011. Among them, 21 VLBW infants (4.27%) were diagnosed with fungemia. All of these infants received parenteral hyperalimentation therapy. Among the infants with fungemia, 12 received endotracheal intubation, 19 received a peripherally inserted central catheter and all were treated with antibiotics. The main clinical manifestations in the infants were abrupt fever, pallor, mottling, cold clammy skin, tachycardia or bradycardia,tachypnea or apnea, cyanosis, abdominal distention, poor feeding and lethargy. The pathogen species isolated from the infants were nonalbicans Candida: specifically, Candida tropicalis (52.4%), and C. parapsilosis (47.6%). In the 21 infants with fungemia, fluconazole was used empirically from the onset of the disease. Among these infants, four were treated with itraconazole as a replacement therapy for fluconazole. The outcome was that of the 21 infants with fungemia, 19 were cured while two died. Fluconazole and itraconazole susceptibility in the 21 Candida isolates was 90.48% and 100%, respectively. The incidence of fungemia in VLBW infants remains quite high in southern China. Fluconazole and itraconazole should be considered as a first choice therapy for timely fungemia treatment.

With the widespread use of invasive therapeutic and monitoring equipment in neonatal intensive care units (NICUs), nosocomial fungal infections, particularly those caused by Candida species, have increased substantially [1-2]. A study indicated that fungal species were responsible for 9% of sepsis and 28% of mortality in very low birth weight (VLBW) infants [3]. A prospective cohort study, conducted in six geographically diverse NICUs from 1993 to 1995 in the USA, indicated that 35 out of 2847 infants developed fungemia (including 23 out of 421 babies with body weights<1,000 g). Candida speciesare an important cause of late onset fungemia in NICU patients [4]. Though most studies show that Candida albicans is a common pathogen, infections caused by nonalbicans Candida are becoming more frequent [5]. Here, we report on a retrospective study that explored the range of clinically important nosocomial pathogens in NICU infants, and the risk factors associated with fungemia in a tertiary hospital in Shenzhen, China.

The study was approved by the Hospital Clinical Research Ethics Committee and was conducted in the NICU of the Shenzhen Maternal and Child Care Hospital. This NICU is on the 4th-floor of the building and caters for about 1800 neonates all year round. These include VLBW infants who require ventilation, hemodynamic, and metabolic support.

Through database searches, the clinical and microbiological records of all VLBW infants in this study were reviewed. The following information was collected: demographics, gestational and perinatal data, antenatal risk factors, septic episodes, type and duration of nutrition, birth weight, gestational age, complications of prematurity, prior use of a central venous catheter, duration of mechanical ventilation before the first Candida-positive blood culture, antibiotic therapy, Candida species identification, duration of fungemia, complications, treatments received, and clinical outcome. Infants with a diagnosis of Candida fungemia had their diagnosis confirmed by microbiological laboratory and clinical criteria. The exclusion criteria were as follows: incomplete data or charts, incomplete culture surveillance (i.e., unavailability of results for at least three cultures per week obtained from at least four different sites during each infant's stay in NICU). In addition, infants were also excluded from the study if they had died prior to day four, if they had received any form of antifungal prophylaxis, or if there was no written informed consent from the parents prior to treatment.

Isolation and identification of Candida spp.

Fungemia was defined as the isolation of a species of yeast or mold from blood cultures and fungemia-related clinical signs and symptoms. Diagnoses of fungemia were made based on at least two fungal-positive cultures from peripheral blood drawn at intervals of more than 24 h.

On admission and during their stay in NICU, blood specimens from the infants were collected weekly. Blood cultures were incubated according to standard laboratory methods and species identification was performed using an API 20C (bioMérieux) and Vitek yeast identification system (Vitek, Inc., Hazel-wood, MO) [6]. A positive result was confirmed by production of acid and gas. In addition, the isolates were genotyped by the extended API ID 32 C system (bioMérieux). Yeasts isolated from the blood cultures were detected using a Bactec 9120 system (Becton Dickinson, INC, Sparks, MD) [7]. Eradication of fungemia was defined as non-recovery of Candida isolates from at least two consecutive blood cultures after antifungal therapy.

Antifungal susceptibility tests on pathogen isolates from each fungemia episode were conducted using the Microdilution Colorimetric Sensititre Yeast One SYO-09 panel (TREK Diagnostic Systems). The test determined the minimal inhibitory concentrations (MICs) of the following seven antifungal agents: amphotericin B, fluconazole, itraconazole, voriconazole, flucytosine, caspofungin, and micafungin. The breakpoints applied were those of the Clinical and Laboratory Standards Institute (CLSI) [8]. Each isolate was tested in triplicate. The isolates were considered to be drug-susceptible if the MIC values for fluconazole were <2mg/L, whereas the MIC values of the other six antifungal agents were set at <4mg/L[9].

Four hundred and ninety two VLBW infants were admitted to the NICU of the Maternal and Child Health Hospital at Shenzhen, China from January 2008 to December 2011. Among them, 21 infants (4.27%) developed fungemia as defined by fungal-positive blood cultures and their clinical signs and symptoms. Thirteen (61.9%) were boys and eight (38.1%) were girls. The gestation ages were 26–32 weeks (30.8 ± 2.67 weeks) and the birth weightswere930–1495 g (1229.33±158.10 g). The length of hospital stay was 15–124 days (with an average of 34 days). The earliest disease onset time was three days after birth while the latest was 51 days after birth. Each fungalinfected infant was cared for in a separate area from other infants in the NICU (Table 1). 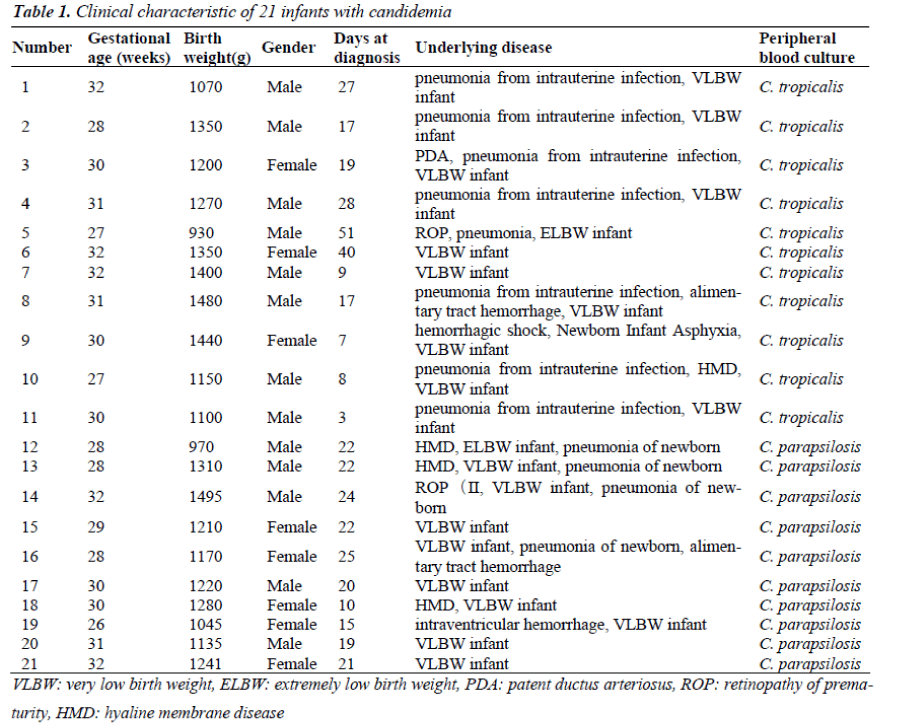 The most frequent comorbidities were pneumonia (12 infants, 57.1%) and hemorrhage (4 infants, 19.0%). The main clinical manifestations were non-specific, but included episodes of respiratory distress (14 infants, 66.7%), antibiotic failure (12 infants, 57.1%), and gastrointestinal symptoms (four infants, 19.0%). The other manifestations were abrupt fever, pallor, mottling, cold and clammy skin, tachycardia or bradycardia, cyanosis, and lethargy. Most infants developed thrombocytopenia (15 infants, 71.4%) and leukopenia (10 infants, 41.6%) within 7 days of fungemia and had high C reactive protein levels (CRP)(20 infants, 95.2%), (Table 2). Fluconazole was used at the onset of clinical signs for empirical therapy. Two infants had persistent fungemia despite antifungal treatment and died 17 and 25 days after the onset of fungemia.

Risk factors included very low birth weight (90.5%), low gestational age<32 wk (100%), and a stay in NICU of more than 15 days (100%). All infants had received parenteral hyperalimentation therapy. Invasive procedures such as use of a peripherally inserted central catheter (PICC), endotracheal intubation, and total parenteral nutrition (TPN) were performed in 19 cases (90.5%), 12 cases (57.1%), and 20 cases (95.2%), respectively. Assisted- ventilation procedures were performed on 14 infants (66.7%). Respiratory disorders were observed in 17 infants (81.0%), CNS disorders in two infants (9.5%), congenital malformation in four infants (19.0%), and complications of the intestinal tract in six (28.6%) others. Renal deficiency was observed in three infants (14.3%). Compared with C.tropicalis, C. parapsilosis was more likely to be associated with high PICC, endotracheal tubes, neutropenia, CRP and infant mortality (P <0.05) (Table3). 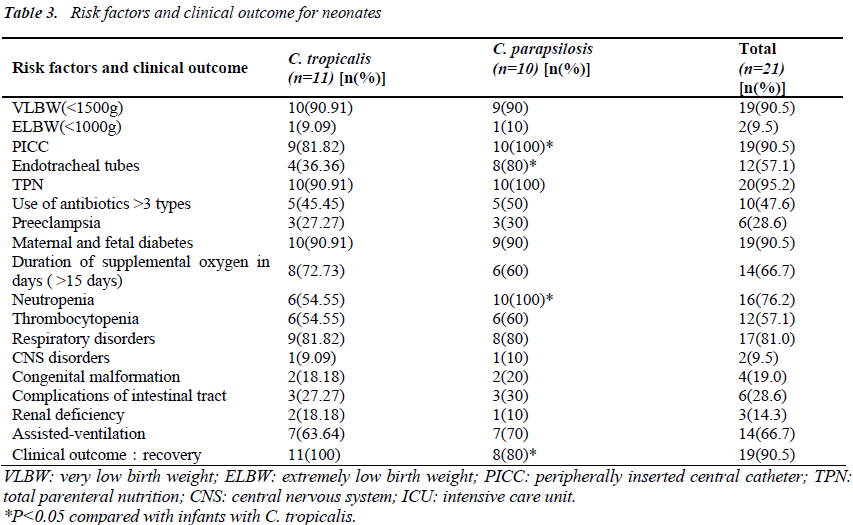 Twenty-one isolates were obtained and typed for species. Of these, 10 were from cases infected with C. parapsilosis (47.6%), while the other 11 were from cases infected with C. tropicalis (52.4%). C. albicans was not isolated. Both C. parapsilosis and C. tropicalis were susceptible to amphotericin B, caspofungin, voriconazole, posaconazole and itraconazole. Fungal susceptibilities to ketoconazole and fluconazole were 95.24% and 90.48%, respectively.

Antifungal agents had been administered to the infants as empirical therapy at least one day prior to the blood culture results being obtained. All cases had been treated with fluconazole from the onset of fungemia signs. Seventeen infants (81.0%) were started on fluconazole at 12 mg/kg (first dose) after which the dose was reduced to 6 mg/kg for 30 days. Four infants (19.0%) were treated with fluconazole for 7 days but were then switched to itraconazole (6 mg/kg bid for the first 2 days and then 6 mg/kg qd for 21days). The outcome was that of the 21 infants with fungemia, 19 were cured, while two died．

Candida is the third most common pathogen responsible for nosocomial infections in VLBW infants, resulting in substantial mortality and morbidity in this population[10]. Recently, non-albicans Candida fungemia in hospital infections has become the focus of attention [11-13]. Nonalbicans Candida fungemia is usually difficult to diagnose, refractory to treatment, and its mortality can be as high as 40-60% [5,14].

In this retrospective study, we should point out that two outbreaks of fungemia occurred in the NICU. On May 21, 2008, the first outbreak of fungemia due to C. tropicalis began and lasted for 16 days (June 5, 2008); this outbreak involved 11 infants in the NICU. On Sept 7, 2008, another outbreak of fungemia this time due to C. parapsilosis commenced and lasted for 21 days (Sept 28, 2008); this outbreak involved five infants in the NICU. To summarize the two outbreaks: the cases were primarily premature VLBW infants, but there were some cases of extremely low birth weight (ELBW) infants as well. All cases were premature with gestation ages of 28–32 weeks and birth weights of 970–1495 g. All had received antibiotics and invasive procedures. The blood culture from the last Candida-infected infant became negative on day 23, and the last infant was discharged from hospital on day 100. All of the infected infants fully recovered. Three reasons could explain the two outbreaks in 2008. First, the NICU relocated to a new building. During the move, there were many ELBW infants and the ward was very crowded. Second, the hospital is located in Shenzhen, a city in southern China that has high average temperatures and humidity from May to September. The humid climate in this subtropical zone benefits the growth of Candida. Third, the very high population density (10.5 million people in an area of about 1900 km2) increases the yearly incidence of deep mycosis.

The risk factors for neonatal fungemia usually include prematurity, LBW, lack of enteral feeding, prolonged hyperalimentation therapy, and early use of cephalosporin and broad-spectrum antibiotic therapy [15]. From our data, we believe that the risk factors for neonatal fungemia may be extended to very low birth weight, low gestational age, previous antibiotic use, PICC, endotracheal intubation, TPN, and a long stay at the NICU. Premature infants have high skin/mucous membrane permeability to exogenous organisms and immature immune systems; therefore, there is more risk of systemic fungemia in such infants [16].

C. tropicalis is a medically important colonizing fungus and a leading pathogen among non-albicans Candida species that cause blood stream infections [17-18]. However, C. tropicalis infections have non-specific clinical manifestations. In this study, all cases occurred one week after birth, suggesting that the infections were not likely to have been acquired from the mother.

The first-line treatment choice for fungemia in infants is usually amphotericin B. Amphotericin B has greater toxicity than other antifungal drugs; therefore, second-line agents such as fluconazole and itraconazole could be substituted for it. Fluconazole is currently listed as an option for empirical treatment of Candida fungemia, and this includes its use in preterm infants [24]. However, since resistance to fluconazole has been reported, itraconazole is usually preferred [25]. Itraconazole is effective and well tolerated in VLBW infants with prolonged fungemia. It could be used as an alternative treatment for neonatal non-Albicans Candida fungemia that is not responsive to first-line antifungal therapy.