A two-fold interpenetrating porous metal-organic framework, namely {[Zn(bpydb)H2O](DMA)12]}n (1, bpydbH2=4,4´-(4,4´-bipyridine-2,6-diyl) dibenzoic acid, DMA=N,N-Dimethylacetamide) based on a π- electron-rich ligand has been solvothermally prepared and characterized by single-crystal X-ray diffraction analysis. This compound is a 2-fold interinfiltrating configuration that has a great solventaccessible volume. The reseason to search on the antitumor activities of the title compound 1 and its corresponding organic ligand bpydbH2 was to inhibit human osteoma sarcomatosum cells (293T, 3T3, B16 and 769-P) developed by MTT assay. It was concluded that by the comparison with the organic ligand, compound 1 exerted rather potent activities against all of these cell lines.

The treatment comes to no effect on account of the increase of the drug resistance in the genetically unstable tumor tissue [1]. By Setting the genetically stable endothelial cells of the developing tumor as target brings much hope for more specific and less toxic treatment so as not to be responsive to multidrug resistance [2,3]. Some new antiangiogenic agents can be provided by the clinic by present, and according to the statisitic represents us that there exists antiangiogenic properties in a certain proportion of the more useful cancer chemotherapeutic drugs [4,5]. Much attention has been attracted since the past few years on the design and synthesis of the coordination polymers and supramolecules with transition metal [6]. The purposes of doing the research on this field are to discover and synthesize the new compounds and materials with utility function and application value, for instance, the coordination complexes with transition metal have been full taken advantage in the field of light, electricity, magnetism, new materials, catalyst, bionics, and biology [7-9]. In this paper, we made a plan that provided a two-fold interpenetrating porous metalorganic framework based on a π-electron-rich ligand bpydbH2 (Figure 1), and then made evaluation on their antitumor activities. 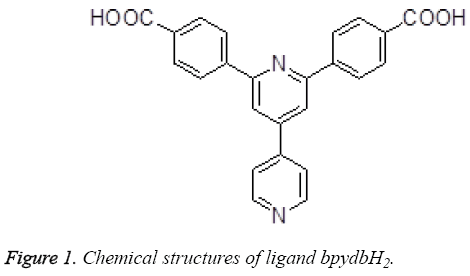 All of the starting materials and agentia acquired in this paper were purchased and used without being further purified. Element analyses (C, H and N) were carried out by an elemental Vairo EL III analyzer. Mercury CCD diffractometer was used to record single-crystal X-ray diffraction data for compound 1. Moreover, a XT-4 micro melting apparatus plays a role as taking on the melting points, and the thermometer was uncorrected. Four human osteoma sarcomatosum cells (293T, 3T3, B16 and 769-P) were obtained by paying to the National Institute for the Control of Pharmaceutical and Biological Products (NICPBP).

Synthesis and characterization of the title compound 1

The single crystals which is suit for compound 1 were obtained by evaporating the chloroform solution. The way to collect he diffraction data was making the use of a Bruker Smart Apex CCD area detector using a graphite monochromated Mo Kα radiation (λ = 0.71073 Å) at room temperature. The structure was dissolved by means of the program SHELXL-97 [10] and Fourier difference techniques, and refined by full-matrix leastsquares method on F2. All hydrogen atoms were added notionally. The following Table 1 lists the crystallographic data for compound 1.

Human osteoma sarcomatosum cells (293T, 3T3, B16 and 769- P) were grown in a RPMI 1460 medium supplemented with 10% fetal calf serum, 100 μg/mL penicillin and 100 μg/mL streptomycin. They were incubated at the temperature of 37°C in a moist incubator and 95% air and 5% CO2. Cells at the exponential growth were diluted to 5 × 104 cells/mL with RPMI1640, and then seeded in 96-well cell culture at a volume of 100 μL per cell, respectively, and incubated for 24 h at 37°C in 5% CO2. After incubation of cells for up to 96 h, medium was removed from each cell and 150 μL of MTT (0.5 mg/mL) solution, diluted 10-fold by RPMI 1460 was subsequently added. The IC50 values were measured by depicting the ratio viability versus concentration on a logarithmic chart and reading off the concentration where 50% of cells viable involved in the control. In order to get the mean values, it is requested that each experiment was conducted at least three times in the same way.

Solvothermal reaction of 4,4´-(4,4´-bipyridine-2,6-diyl) dibenzoic acid with Zn(NO3)2·6H2O and 2,6-Dimethylpyridine in a mixture solvents of DMA, MeOH and water for the whole three days resulted in the formation of yellow block-shaped crystals of 1. The result of single crystal X-ray structural analysis reveals that 1 crystallizes in monoclinic space group C2/c and possesses a two-fold interpenetrating porous framework structure. The asymmetric unit is made up of one Zn2+ ion, one bpydb2- ligand and one coordinated water molecule. The six-coordinated Zn2+ ion is bonded with five O atoms from two carboxylic acid groups on two different bpydb2- ligands, and the remaining site was finished by one N atom from another different bpydb2- ligand (Figure 2a). The bond distance of Zn-N and the Zn-O is 2.058(4) Å and in the scope of 2.045(4) to 2.311 Å respectively. Ligand bpydb2- takes a role as an organic trinodal building block and two carboxylates and one pyridine from three ligands bridge one Zn ion to organize a octahedron Zn cluster (Figure 2b), ZnN(COO)2, as an SBU to act as an octahedral trinodes node. Combining the octahedral trinodes with the trigonal trinodes led to a 3-D network having a uninodal 3-connected network topology with large hexagonal one dimensional (1D) channels along the b axis (Figure 2c). The size of the 1D channels are 13.1 × 13.1 Å2, which allows another identical net to penetrate; namely, the entire structure of 1 is a 2-fold interpenetrated 3D net (Figure 3). Despite interpenetration, the 1D channels are still observed along the b axis, with pore sizes of 9.3 × 7.4 Å. The solvent-accessible volume calculated by the PLATON program reveals a large value of 54.8% per unit cell volume. To our knowledge, among numerous interpenetrated MOFs, only a few frameworks have shown a solvent-accessible volume of >50%. 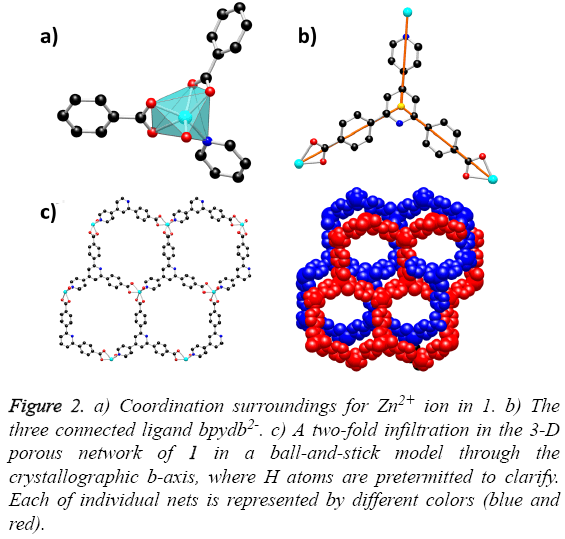 Figure 2: a) Coordination surroundings for Zn2+ ion in 1. b) The three connected ligand bpydb2-. c) A two-fold infiltration in the 3-D porous network of 1 in a ball-and-stick model through the crystallographic b-axis, where H atoms are pretermitted to clarify. Each of individual nets is represented by different colors (blue and red). 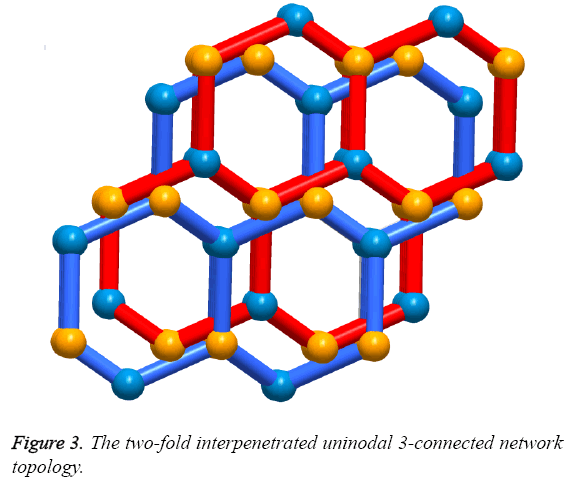 The cytotoxicities of the title compound 1 and its homologous organic ligand bpydbH2 against 293T, 3T3, B16 and 769-P cell lines were evaluated by MTT assay, and the IC50 values derived from the experimental data were concluded in Table 2. It is obvious that organic ligand bpydbH2 was inactive against all of these cell lines (IC50 > 100 μM). At this concentration, bpydbH2 should exert high cytotoxicity against the normal cells, thus we infered that it did not exert any inhabitation selectivity towards these cell lines. However, after the tumor cells were incubated in the presence of compound 1 for 72 h, the IC50 values for the compound ranged from 21 to 30 μM, indicating that the title compound 1 exhibited antitumor activity against all of these cell lines in different degrees.

According to the above-mentioned data, it shall be concluded that the antitumor activity of compound 1 has been advanced greatly when organic ligand bpydbH2 is in coordination with Zn ion. However, additional studies are needed to define the mechanism underlying its antitumor activity and evaluate the correlations of its drug efficacy in vivo.