The cardiotoxicity induced by doxorubicin are often studied by conventional techniques which are expensive and the experiment ends with the death of cells in culture. Thus a new impedance technique is needed to study the cardiotoxicity by overcoming the drawbacks of conventional techniques. The present paper discusses the measurement of cytotoxicity of doxorubicin on cardiomyocytes of neonatal rats by monitoring the impedance of cells cultured on impedance sensing device. The device was purchased from Applied Physics to perform the impedimetric cytotoxic study of doxorubicin on cardiomyocytes. The impedance of drug treated sample above 4 μM dose decreases rapidly due to fast cell death and detachment from the electrode surfaces. The impedimetric cytotoxic data compare well with the data of conventional techniques such as MTT assay and phase contrast imaging.

The anthracycline antibiotic doxorubicin has been used in anticancer therapy due to its high antitumor and anticancer activities [1,2]. It is successively used for more than 3 decades to treat wide varieties of cancers such as blood cancer, sarcomas, and tumours in all age groups [3]. However, toxicity of doxorubicin on normal cells specifically on heart cells limits its use in chemotherapeutic treatments [4]. Generally the cytotoxic effects of doxorubicin in culture have been studied by using the conventional methods such as biochemical assays and microscopic imaging techniques. However, such methods are expensive and the cells are sacrificed to get the end results. Thus a technique like impedimetric detection of cytotoxicity [5-8] is required to study the cellular behaviours without disturbing the culture environments of cells.

The heart was extracted from neonatal rats and the cardiac myocytes were prepared and cultured using a previously described method [16] with minor modification as described below. HBSS was used to wash the cardiomyocytes for several times to remove the enzymes from the medium. Then the cardiomyocytes were floated in MEM supplemented with FBS, penicillin, streptomycin, glutamine, and HEPES (pH 7.3). The quantity of cell was tuned to 3 × 105/mL. Then the cardiac cells were cultured in 8W10E devices and 96-well plates to study the cytotoxic effects of doxorubicin.

The 8W10E device consists of eight wells and each well possesses ten gold microelectrodes (250 μm diameter). The microelectrodes provide surfaces to culture cells above it and also help to measure the impedance by passing current through the cells. The dimension and the volume of the well are 0.8 cm2 and 600 μl respectively. The cell culture was being facilitated by keeping the array plate in an incubator (37°C and 5% CO2) followed by measurement of impedance by using an impedance analyzer.

The cardiotoxicity of doxorubicin was calculated by measuring the impedance of drug treated cells in a frequency range of 100 Hz to 1 MHz in a logarithmic scale after 24 h of treatment. The mean value was obtained and then imported to ZsimpWin (Version 3.10) for fitting purposes and to get a perfect equivalent circuit. The equivalent circuit was obtained from the literature [17] and was shown in Figure 1. 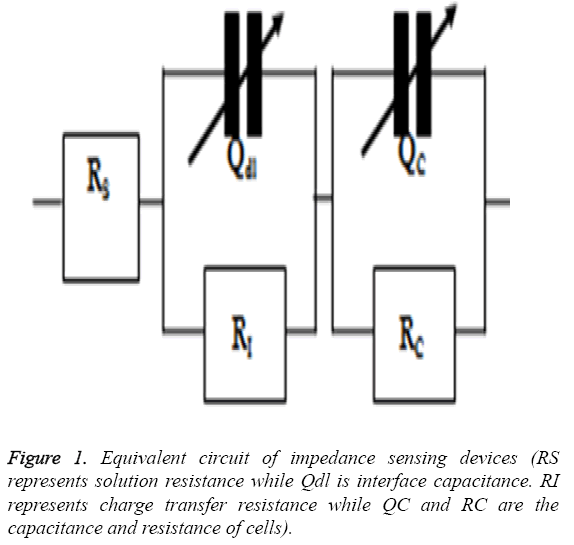 The array devices was cleaned with 75% ethanol for 20 min, dried with nitrogen, and uncontaminated with ultraviolet rays for 20 min. MEM (300 μl,) was then poured to the wells of the impedance sensing device and incubated at 37°C for 30 min. Next, the cardiomyocytes (300 μl, 1 × 105 cells) suspensions were added into the well of the device. Then the array plate was placed in an incubator for subsequent cell culture and impedance measurement. The doses of doxorubicin (0, 2, 4, and 6 μM) were put in into wells of the array plate after 30 min of inoculation to study cardiotoxicity of doxorubicin.

Cardiomyocytes (1 × 104 cells/well) obtained from neonatal rats were seeded and treated with doxorubicin at varying concentrations (100 nM to 10 μM) after 24 h of cell growth. IC50 value was calculated by MTT assay as discussed in the literature [18].

Cardiomyocytes (1 × 104 cells/well) were cultured in 96-well plates and treated with doxorubicin doses such as 0, 2, 4, and 6 μM for 24 h. Next, the cells were cleaned with PBS, rinsed with 0.25% of trypsin and blotted with 0.4% trypan-blue. Then the cell viability was carried out by using automated cell counter (Biorad).

The cardiac cells were seeded on coverslips by using MEM. The cells were treated with varying drug doses of doxorubicin (0, 2, 4, 6 μM) for 24 h. The images were captured after 24 h of treatment by using phase contrast microscope.

The bode plot for the cytotoxic effects of doxorubicin after 24 h of treatment are shown in Figure 2. The investigational data are integrated well with the equivalent circuit as explained in Figure 1. This result can be matched up to the result of HeLa and HaCaT cells as deciphered in the literature [17]. It is apparent from the Figure 2 that the impedance value decreases progressively with increase of frequency. With the increase of drug doses over 4 μM, the cell death occurs rapidly and the impedance decreases considerably as compared to the control sample. The relative standard deviations for doxorubicin treated and normal samples are established below 10% which demonstrated the reproducible ability of the present research. 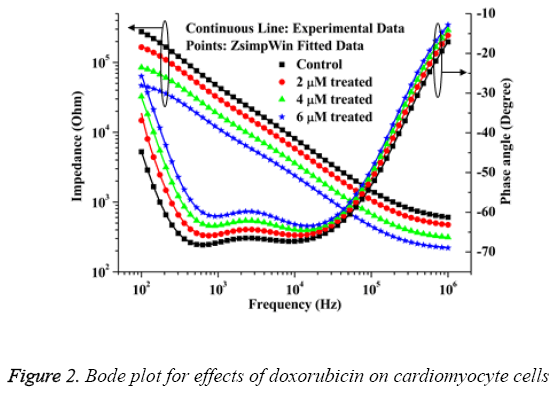 Figure 2: Bode plot for effects of doxorubicin on cardiomyocyte cells.

The IC50 value of doxorubicin in cardiac cells calculated by MTT assay is 3.55 ± 0.3243 μΜ. The percent of living cells computed by automated cell counter for normal, 2 μM, 4 μM and 6 μM doxorubicin treated samples are 97 ± 3, 75 ± 4, 49 ± 3, 31 ± 5 respectively which connect well with the impedance data as shown in Figure 2. The cell viability (%) was calculated from the impedance by using the equation (1) taken from the previous literature [6].

Where, ZC and ZT represent the mean value of impedance for untreated and treated sample at 24 h respectively. The IC50 value obtained from the impedance data is 3.64 ± 0.3137. So it is apparent that, the IC50 value calculated from impedance correlate well with the value deciphered by MTT assay.

The real time cardiotoxicity of doxorubicin was studied by measuring impedance from 15 h to 24 h of inoculation of cells.

In this case normalised impedance (NI) value has been calculated by using Equation (2) to eliminate the effect of medium.

Where, ZCell and ZNo cell are the impedance of the system with and without the cells in culture media of same volume.

The real-time cardiotoxicity plot is shown in Figure 3. From the figure it is evident that the drugs started working on the cells at around 20 h as the impedance decreased drastically thereafter. 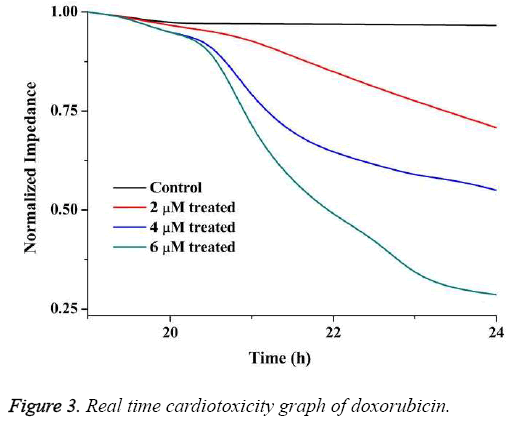 The images as described in Figure 4 show that the cell death augments with the increase of doxorubicin doses. This condition arises due to dose dependent cell death in cardiac cells of neonatal rats. The phase contrast images decipher the apoptotic properties of doxorubicin as explained in the old literatures [19,20]. 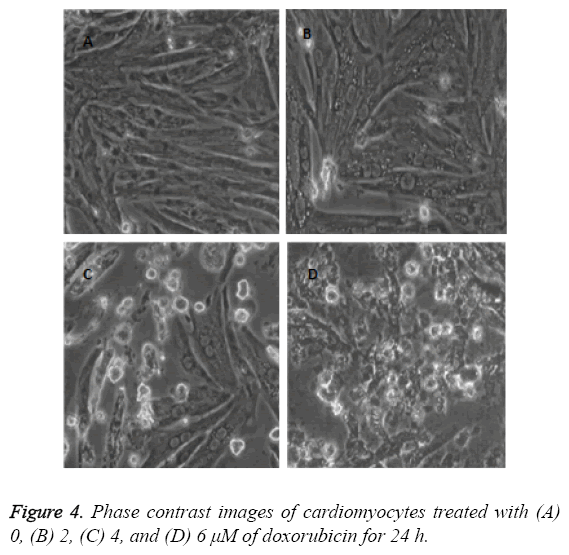 With the increase of drug doses of doxorubicin, the cell death enhances which leads to the detachment of cells from the planer electrode areas. Thus the impedance values decrease as cells died and detached from the electrode surfaces. The present outcome can be judged against to the impedimetric cytotoxic effects of several chemotoxic agents as depicted in previous literature [7,21,22].

The mechanism of the used electrode based sensor depends on the basic adhere properties of cells on gold electrode. In the absence of doxorubicin the cells firmly attach with the electrode surfaces and forms monolayer structure. However when doxorubicin kills the cells the anchoring power of cells decreases and the cells detach from the electrode surfaces. Thus the total number of cells responsible for impedance measurement decreases leading to decline in impedance values.