A new and easy landmark for RLN in thyroid surgery: midpoint of first tracheal ring height

Introduction and Aim: Recurrent laryngeal nerve paralysis is one of the most serious complications of thyroid surgery. To reduce this complication, its characteristics and the anatomy at the entry to the larynx and around the Berry ligament, which is the most frequent location of injuries, must be established well. With this purpose, we studied the relation between the first tracheal ring and the recurrent nerve in this study.

Material and Method: One hundred and twenty-six females and 30 males who had undergone thyoroidectomy were included in the study. THV, RRVH, LRVH, RRAD, LRAD parameters were measured on all the patients. Patients were divided into two groups as females and males and statistical analysis was carried out using t-test and Pearson’s correlation test.

Conclusion: We saw that the vertical RLN height remained under the vertical height of the midpoint of the first tracheal ring (akil point) in all the cases, including males and females. This will ensure easier identification RLN during thyroid surgery and advancing from the anterior towards the posterior till the midpoint of the height at the level of the first ring of the trachea. In this regard, we think that this point is an important landmark.

Thyroid surgery is one of the most frequently performed procedures of the head and neck surgery. Despite the advancements in the modern surgery, paralysis of the recurrent laryngeal nerve continues to be one of the most serious complications of thyroidectomy. In the literature, rates of transient injuries of the recurrent laryngeal nerve vary between 0 and 7.1%, while the same for permanent injury vary between 0 and 11% [1]. The area around the Berry ligament and the area that the nerve passes under the cricothyroid muscle face us as the areas that the injury risk during the surgery is the highest [2-6]. Several techniques and methods have been suggested in the literature to facilitate identification during surgery. Some of these methods given in the most recent few studies are relevant for the relationship between the trachea and recurrent laryngeal nerve [3,7]. Anatomically, the course of the recurrent laryngeal nerve is close to the trachea after it passes by the inferior pole of the thyroid [8,9]. Then, it advances in the tracheoesophageal groove till it crosses the thyroid artery [9,10], then it crosses the inferior thyroid artery from under or over it or crosses between its branches [11,12] and reaches the level of Berry ligament. After passing by the Berry ligament, it runs over the first tracheal ring and enters larynx from under the cricothyroid muscle [2]. The relation between RLN and the first tracheal ring as established in the study of Akil et al. [3] is particularly important as regards its closeness to the Berry ligament and the location of entry through the cricothyroid membrane. Therefore, in this study, we attempted to establish the relation between the midpoint of the vertical height of the first ring of the trachea (Akil point) suggested by Akil et al. [3] as the landmark and RLN separately at right and left sides and in males and females in larger numbers.

The study protocol has been approved by the Ethical Committee of Diyarbakir Gazi Yasargil Training and Research Hospital.

Each of the patients signed the consent form.

Patients were divided into two groups as males (Group 1) and females (Group 2). Procedure and measurement were carried out by the same surgeon. RLN was exposed through its entire length from the lower pole of the thyroid till the laryngeal entry in all the cases. Vertical height of the first tracheal ring was measured from the posterior of the trachea towards the anterior in all the cases (Trachea Vertical Height, (THV)) (Figure 1). Then the heights of the right and left recurrent laryngeal nerves at the level of the first tracheal ring were measured at right and left sides from posterior to the anterior (Right Recurrent Vertical Height (RRVH); Left Recurrent Vertical Height (LRVH)) (Figure 1). After carrying out these measurements, the distance to the right and left recurrent nerves from the midpoint of vertical height of the first tracheal ring (we named this point as Akil point after Akil F et al. [3] who have studied this point for the first time in the literature), which we have taken as a landmark in this study, was measured based on the formula (RVH-THV/2), and was named as the right and left recurrent Akil point diameters (RRAD and LRAD). All the measurements were carried out by the same surgeon in cm. 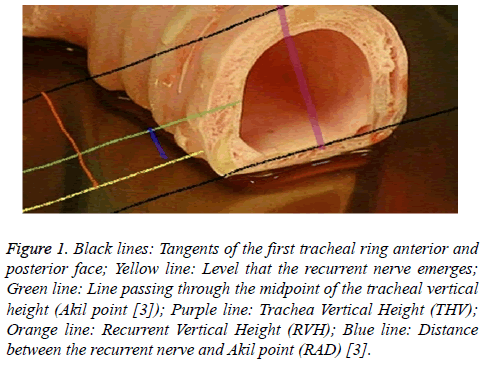 Statistical significance level was accepted as P<0.05. Correlation analysis was carried out using the Pearson test and results were expressed as r values.

Table 2: Correlation analysis between the total number of patients and right and left sides.

With this purpose, we studied the relation of the recurrent laryngeal nerve with the first tracheal ring that it runs over right before it passes under the cricothyroid muscle, which is among its most important neighborhoods in this area. Based on the literature review in the English language, the only study investigating the relation between the recurrent laryngeal nerve and the first tracheal ring was the study of Akil F and colleagues [3]. No statistically significant difference was found between male and female groups in our study as regards THV (p<0.432), RRVH (p<0.412) and LRVH (p<0.061). Also, no statistically significant difference was found between male and female groups as regards RRAD (p<0.087) and LRAD (p<0.064). It was observed that RRVH and LRVH were strongly correlated with each other without gender differentiation (p<0.001; Pearson r=0.812). Again, very strong positive correlation was observed between RRAD and LRAD (p<0.001; Pearson r=0.722).

When we examined the results of our study in more detail and analytical way, we saw that recurrent laryngeal nerve was beneath the THV midpoint in all the female and male cases. Furthermore, when we considered that mean values of recurrent height in both males and females, we saw that the vertical height of the right recurrent nerve was smaller at the level of the first ring of the trachea in both genders. However, we observed that the left side recurrent nerve was more superficially located as compared to the right side in 4 cases in the male group and in 14 cases in the female group. In the literature, there are many studies involving the recurrent laryngeal nerve and its localization before entering larynx from under the cricothyroid muscle. Costanzo et al. [15] carried out a study on the Zuckerandle tubercle, Caldrelli et al. [2], Jatzko et al. [16], Berlinet al. [17] on the relation with Berry liegeman, and Akil et al. [3] carried out a study on the relation between the trachea and the recurrent nerve.

While all these studies are carried out to establish the recurrent laryngeal nerve in this area that the laryngeal nerve injuries are most common and to reduce the rates of paralysis, we only found the study of Akil et al. [3] in the literature. Since the midpoint of the vertical height of the first ring of trachea established in this study is close to the entry of the nerve in the larynx and is easily accessible and measurable, we focused on this point in this study also studying on a larger number of patients and adding the measurements of the recurrent Akil point [3] (midpoint of THV) distance. Considering the results of our study also, as indicated by Akil et al. [3], we observed that the recurrent laryngeal nerve remain underneath the THV midpoint in all the cases. Again in similarity with that study, we observed that the right recurrent vertical height was smaller as compared to the left side. We think that RAD, which Akil et al. [3] have not discussed previously but we have measured in our study, will provide ease for the surgeon particularly in patients who will undergo total thyroidectomy as it gives the level of the safe area and the distance of the recurrent laryngeal nerve to the THV midpoint. We also think that our study will provide significant advantage for the surgeon particularly for patients who will undergo total thyroidectomy after establishing the THV midpoint at one side when the counter lateral lobe to indicate the level that the surgeon can go down to.

Based on our findings, while the midpoint of the vertical height of the first tracheal ring stands out as a very important landmark, proving that the recurrent nerves passes from under this point with multicenter studies carried out on large numbers of patients remains as an important issue waiting for investigators to be handled in future.