This study aimed to evaluate the effectiveness of hypertonic saline (HS) in treating Chinese mainland populations with high intracranial pressure (HIP). The PubMed, Medline, Cochrane Library, Elsevier, China Biology Medicine disc, China National Knowledge Infrastructure, and Wanfang databases were searched for all randomized controlled trials of HS used to treat Chinese mainland populations with HIP for inclusion in the meta-analysis. The mean difference (MD) and 95% confidence intervals (95% CI) were then calculated. A total of eight randomized controlled trials that studied a total of 567 cases were included. The results showed that compared with the control groups, the MD values of intracranial pressure in the HS groups 1 and 3 hours after administering the medication were 0.00 (95% CI: -0.30-0.30) and -0.23 (95% CI: -0.73-0.26), respectively, and no significant difference was apparent; the MD values of mean arterial pressure and mean venous pressure 1 and 3 hours after administering the medication also showed no significant difference. HS had the same effectiveness in lowering intracranial pressure and changing the hemodynamic features as other treatment options.

Increasing intracranial pressure is one common clinical manifestation of brain trauma, including brain surgery, cerebral hemorrhage, craniocerebral trauma, intracranial spaceoccupying lesions, and intracranial infections, and is part of the pathological process of neurological diseases [1,2]; Therefore, controlling IP is key to improving patient prognosis. Normal IP in the supine position is about 1.33 kPa (10 mmHg), and when increasing PI is caused by brain tissue swelling, intracranial space-occupying lesions, excessive secretion or malabsorption of cerebrospinal fluid, blocked circulation, or excessive intracranial cerebral perfusion [3], dehydration is the main measure to prevent the development of cerebral edema, decrease IP, and prevent herniation of the brain [4]. Mannitol has been used clinically since 1962 and is currently the firstline drug for reducing IP; however, after promotion of its clinical applications, its adverse reactions have received increasing attention. Repeated administration of mannitol can lead to acute renal failure, electrolyte imbalance, and even cerebral edema aggravation (i.e., the rebound phenomenon), thus directly activating the apoptosis of brain cells and increasing patient mortality [5].

In recent years, the role of hypertonic saline (HS) in reducing IP has been re-assessed [6-8], and animal experiments and clinical studies have all shown that HS can reduce IP through various mechanisms, including optimizing the hemodynamics of the body and brain, reducing cerebral edema, regulating vascular spasm, and changing the neurochemical and immune activities of brain tissues. HS has better IP reducing effects than mannitol, and its adverse effects are significantly less than those of mannitol. A meta-analysis by Kamel et al. [9] showed that in the UK, France, or Germany, HS could more effectively reduce IP than mannitol; the main ethnic groups included in that study were European, so HS’s effects on Chinese mainland populations, mainly patients of Mongolia and Southeast Asian ethnicity, are not clear. Accordingly, this study analyzed the randomized controlled trials that compared the effectiveness of HS and other measures in treating IP, aiming to evaluate the therapeutic effects of HS in Chinese mainland populations with high intracranial pressure (HIP).

For English studies, the Elsevier, PubMed, Medline, and Cochrane Library databases were searched for relevant studies, and the China National Knowledge Infrastructure (CNKI), China Biology Medicine disc, and Wanfang databases were searched for Chinese language studies; the publication date was limited from the building of the database until January 2016. The search used the keywords "hypertonic saline solution," "intracranial hypertension," and "brain edema”; the languages were limited to English and Chinese, the trial type was limited to randomized controlled trials, and animal trials were excluded. The references listed in the included studies were examined, and if necessary, hand-retrieval was performed to ensure all of the relevant studies were included in this metaanalysis.

The studies included had to meet the following conditions: 1) a randomized controlled trial; 2) without sex restrictions, patients ≥ 18 years of age, Chinese mainland residents; 3) without any primary disease limits, but accompanied by increasing PI; 4) with sustained IP monitoring, and the IP changes 1 and 3 hours after administering the medication were the primary outcomes; 5) reported data on the outcomes of interest; 6) with clear end point events and evaluation indexes.

Exclusion criteria were: 1) Did not meet the inclusion criteria; 2) Research about drug metabolism and kinetics, animal or cell assay, or immunology; 3) Non-prospective or non-randomized controlled clinical trial; 4) Data could not be extracted due to incomplete information; 5) Prospective randomized trial without a control group or an inappropriate control group; 6) Observational study.

Two reviewers independently screened all of the studies in accordance with the inclusion and exclusion criteria and used the Jadad rating scale to assess the quality of the studies. The literature quality was mainly evaluated from the three main aspects of the Jadad rating scale, namely the randomization and allocation methods, whether a double-blind method was used, and trial dropouts and follow-up losses. Studies with a total score of 1-3 points were defined as low quality, and those with 4-7 points as high quality.

Two reviewers independently extracted the data from the included studies, and the extracted data included the basic information of the study, such as the first author and publication year, research methods, cases in the experimental group and the control group, usage of HS, and outcome indicators. After all of the data were completely extracted, these two reviewers cross-checked the data, and any differences were solved through negotiations; if the difference could not be resolved, a third party was consulted.

RevMan5.3 statistical software (provided by the Cochrane Collaboration) was used, and the continuous variables were evaluated using the mean difference (MD) and 95% confidence interval (CI). The χ2 test was performed to analyze the heterogeneity of the results and the I2 test was used to quantitatively analyze the heterogeneity, with I2>50% suggesting the presence of heterogeneity among different studies. If no heterogeneity was found among the studies, a fixed-effects model was selected for the meta-analysis; if heterogeneity existed, a random-effects model was selected. The treatment effects were reported using the MD and 95% CI, with P<0.05 considered as a significant difference. RevMan5.3 was used to generate a funnel plot to determine the existence of publication bias.

A total of 211 articles were retrieved, and eight were finally included after applying the inclusion and exclusion criteria [10-17] (Figure 1), involving a total of 567 patients (283 cases in control groups and 284 cases in experimental groups). The general characteristics of the included trials are shown in Table 1. 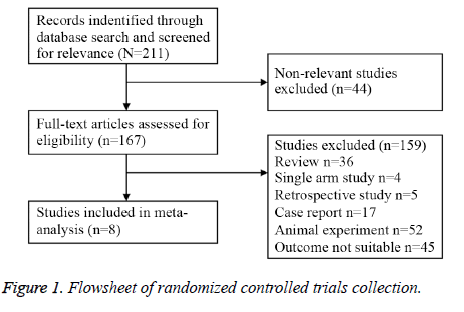 Table 1. General characteristics and Jadad score of the clinical trials included in this Meta-analysis.

Impact of HS on IP 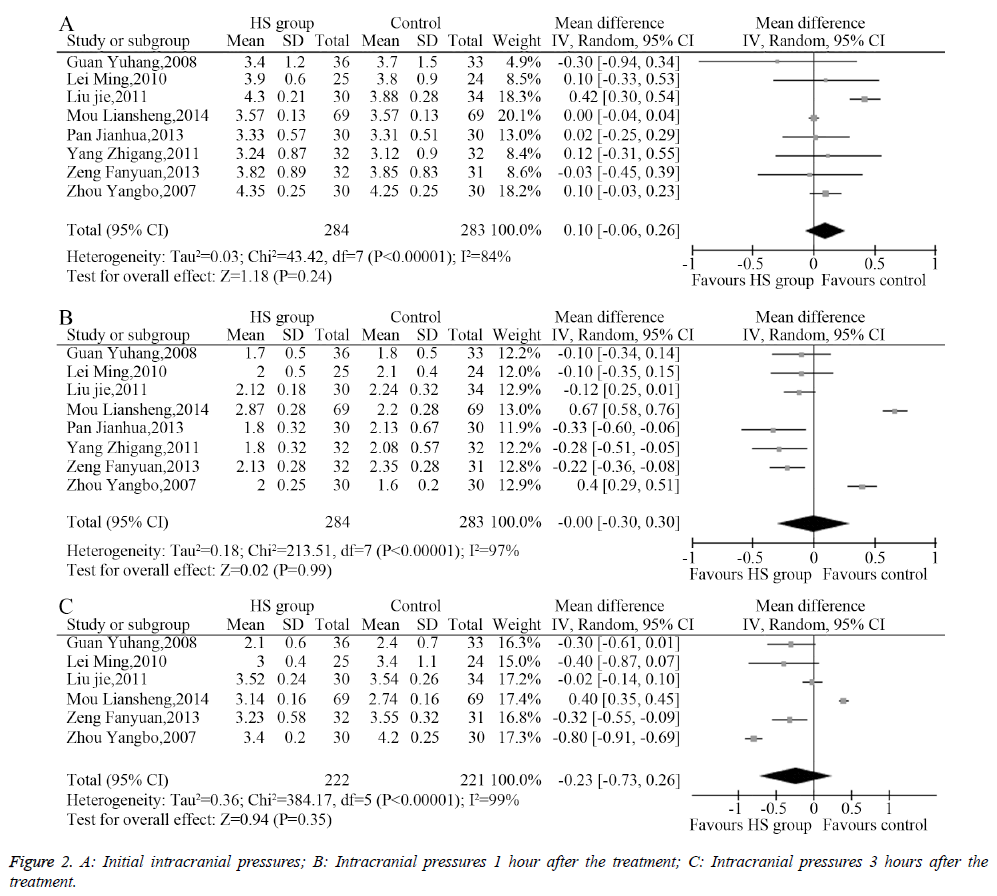 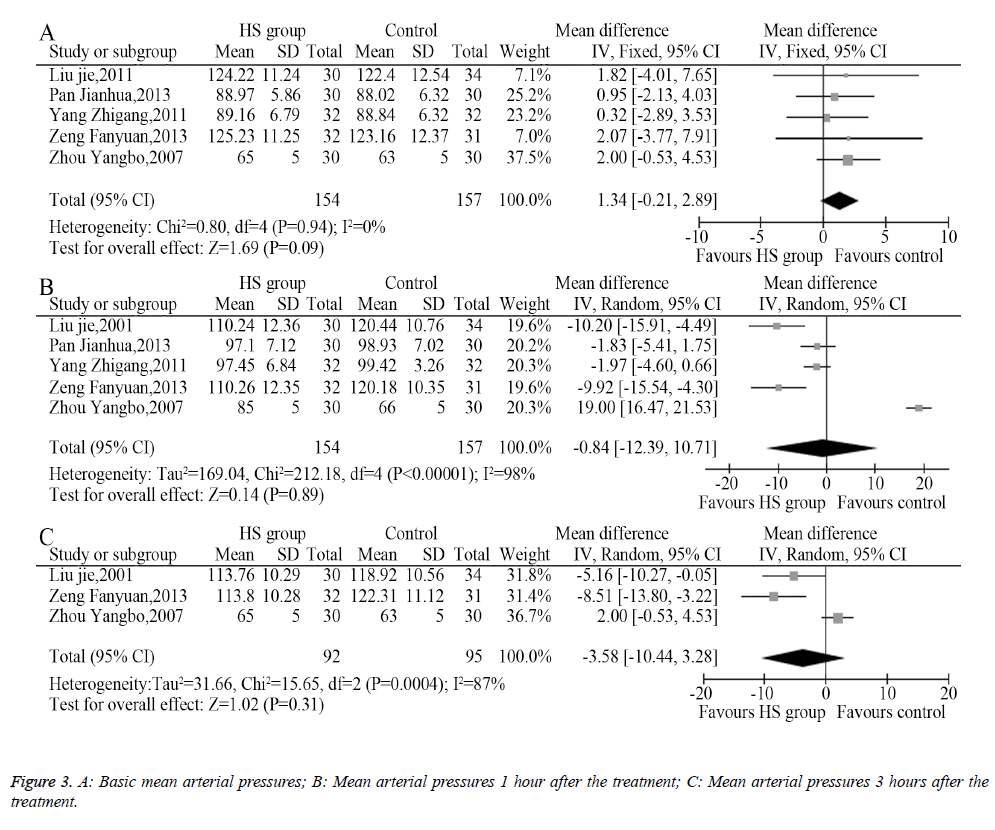 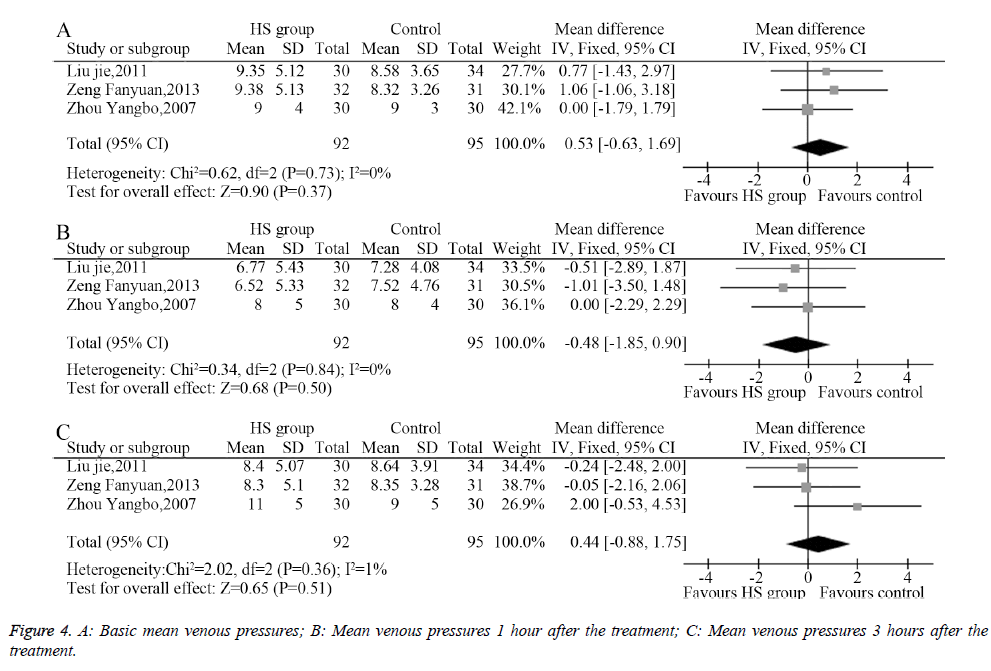 RevMan 5.3 software was used to generate a funnel plot (Figure 5) in which most points were within the scope of the inverted funnel, showing substantial symmetry located on both sides of the baseline, indicating no evidence of publication bias. 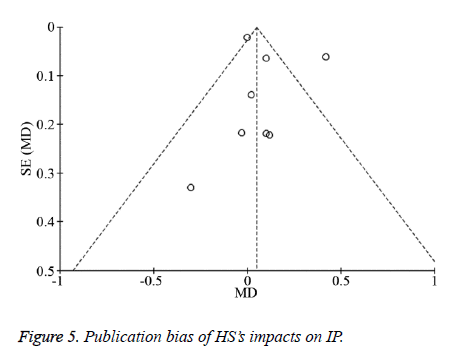 The purpose of this study was to evaluate the effectiveness of HS in treating Chinese mainland populations with HIP, and the meta-analysis showed that in Chinese mainland populations, the 1 and 3 hour after treatment intracranial pressure, mean arterial pressure, and mean venous pressure between the HS treatment and other measures had no significant difference, indicating that HS had the same effectiveness in reducing IP in Chinese mainland populations as other measures, and no difference was found in any aspect of hemodynamic changes. This result is different from that of Kamel et al. [9] who found that HS was more effective in reducing IP than other treatments such as mannitol, but the discrepancy might be related to the concentration of HS. In Kamel’s meta-analysis [9], the doses of mannitol and HS used the same mmol osmotic pressure as the standard, but the clinical trials included in the current analysis did not limit the mmol osmotic pressure, but instead used one fixed HS concentration. In addition, the populations in these two studies were different, and different populations might have different sensitivities to sodium chloride; however, the results of these two studies showed that HS could effectively reduce cerebral edema and decrease intracranial pressure, so it could be used as a conventional treatment regimen for clinically reducing intracranial hypertension.

The mechanisms whereby HS reduces cerebral edema and HIP are still not fully understood; according to animal experiments and clinical trials, its mechanisms might be related to the following effects: osmotic dehydration; cerebral perfusion improvement, relieving the inflammations after brain injuries, or promoting the recycling of GLU neurotransmitters. The higher the osmotic reflection coefficient (ORC) of a substance, the less easily it passes through the blood-brain barrier [18,19]. The ORC of common sodium chloride, mannitol, and glycerol are 1.00, 0.90, and 0.59, respectively, and that of sodium chloride is higher than the other two, indicating that sodium chloride more easily passes through the blood-brain barrier, where it can establish osmotic gradients between blood vessels and tissues; therefore, water can enter the capillaries from the cells and tissue spaces, thus causing the amount of water in the brain to reduced, also reducing cerebral edema and IP.

Brain injuries can lead to acute inflammatory responses, and the neutrophils gather at the injured sites, resulting in peroxidase and protease mediated cell necrosis. The activated leukocytes can also cause tissue edema. HS can regulate the immune system, inhibit the chemotaxis and adhesion of neutrophils, and inhibit the expression of CD11b; it can also inhibit the expression of proinflammatory cytokines (such as tumor necrosis factor-α), promote the expression of antiinflammatory factors (such as a leukocyte IL-10), and adjust the balance of local inflammatory responses, thus reducing primary traumatic brain injuries that lead to secondary injuries [23,24]. Brain injuries often cause the massive release of excitatory GLU, thus excessively activating its receptors and causing excitatory neurotoxicity, as well as further injuries to nerve cells. HS can restore the extracellular Na+ concentration, prompt the reuptake of GLU, and reduce extracellular GLU concentration, thus reducing the excitotoxic effects [25].

We believe that HS is safe and effective in preventing cerebral edema and treating HIP caused by various traumas. Studies have shown that HS not only exhibits superior IP reducing effects than mannitol but also these effects last longer and act faster. Meanwhile, it has no negative impact on the cerebral perfusion pressure; after considering the situation of systemic hemodynamics and electrolytes, HS could be considered as one selectable dehydrating agent. However, due to the limited number of relevant RCTs currently available, comparisons about central pontine demyelination, renal function, and nerve function scoring still lacked convincing data; the ideal concentration, maintenance time, and medication mode of HS are not very clear yet, and these all depend on conducting highquality large-scale randomized controlled clinical trials. Meanwhile, the clinical trial registration system should be further standardized, and investigators should use corresponding standardized and unified testing procedures to integrate clinical research resources as efficiently as possible, and therefore provide more reliable data for evidence-based clinical treatments.

The present study had several limitations: 1) only published studies were included, although the literature was rigorously searched and screened, trials with negative results are not easily published; meetings and abstracts were also excluded, so the included trials were not comprehensive. 2) The total number of the cases included was small, so it might not be able to represent the overall situation in the Chinese mainland. 3) The 10 included studies lacked any description of their blinding methodology, as well as unclear descriptions of how they concealed randomization, so the quality of the studies was relatively low, and low-quality studies often lead to the overevaluation of drug effectiveness; other studies have shown that low-quality studies can underestimate or overestimate the effectiveness of a drug [26,27]. 4) This study only investigated the effect of HS on intracranial pressure, mean arterial pressure, and mean venous pressure, and did not explore the differences caused by different HS concentrations, or the adverse reactions to different treatments. Therefore, we need more high-quality large-scale randomized controlled clinical trials to more comprehensively assess the efficacies and safety of HS in reducing IP, thus providing reliable evidence for its clinical applications.

This work was supported by grants from Key project of Jining Medical University (JY2013KJ047).