Jianpeng You1* and Honglin Liu2

Purpose: Radiotherapy plus radical prostatectomy or Neo-adjuvant Hormonal Therapy (NHT) after radiotherapy has been used for treating middle- and high-risk Prostate Cancer (PCa) patients. In this paper, we made a systematic review and meta-analysis of published randomized trials to assess the NHT clinical efficacy.

Methods: Literatures related to neo-adjuvant hormone therapy (NHT plus chemotherapy or radical prostatectomy) and simple radiotherapy or the conventional therapy for prostate resection were collected from PubMed, EMBASE, Web of Science and Cochrane databases. RevMan5.2 statistical software was utilized for meta-analysis. The quality assessment of the literatures was performed based on the Cochrane risk bias. The similar information was derived from the tests which met the criteria, which was subject to meta-analysis collected before December 30th, 2015.

Prostate Cancer (PCa) is the incidence and progression of cancer in the prostate, a gland in the male reproductive system. A majority of prostate cancers progress slowly, whereas others develop relatively fast [1]. Clinical practice guidelines for prostate cancer screening vary and are controversial due to uncertainty as to whether the benefits of screening ultimately outweigh the risks of over diagnosis and over treatment. In the United States, the U.S. Food and Drug Administration have approved the PSA test for annual screening of prostate cancer in men aged ≥ 50 years. The patient needs to be informed of the risks and benefits of PSA testing before performing the test Supplementation with vitamins or minerals does not appear to affect the risk [2].

Radical Radiation Therapy (RT) or Radical Prostatectomy (RP) followed by Neo-Adjuvant Hormonal Therapy (NHT) has been applied to treat moderate- and high-grade PCa. NHT is highly recommended for PCa patients because it could reduce prostate volume before RT or RP, thereby alleviating the damage of radiation dose on critical organs and tissues intraoperatively. Hence, PCa patients obtained higher clinical efficacy and safety throughout the treatment [3]. In some RCTs, we found that the curative effect of NHT plus RT or RP was superior that of traditional radiotherapy or surgery operation alone, especially for PCa patients who were in middle or high risk [4-6].

In NHT experiment before RT, compared with simple RT, the specificity indicators, for example, Overall Survive (OS), distant recurrence, biochemical Disease-Free Survival rate (DFS) and biochemical failure all increased [7,8]. Pathological stages and Positive Surgical Margins (PSM) of the patients who received NHT before RP increased significantly [9], but OS and DFS was not significantly improved [10,11]. This study was designed to evaluate the clinical efficacy of NHT before RT or RP for the treatment of PCa by RCTs systematic review and meta-analysis.

Relevant data were collected from the following databases including PubMed, EMBASE, Web of Science, and Cochrane Library. In addition, abstract and introduction were collected from the main academic discussions, such as American Society of Clinical Oncology (ASCO), European Society of Medical Oncology (ESMO) and European Federation of Cancer (FEC). We found potential suitable literatures by searching the RCTs. The deadline for document retrieval was December 30th, 2015. In all the search strategies, we used the following MeSH terms and keywords: prostatic cancer, neo-adjuvant hormonal therapy, radiotherapy, prostatectomy, summary, meta-analysis, random sampling and stage III. The literatures retrieved were written in Standard English.

Literature selection was performed based on the principle of PICO (Patient, Intervention, Comparison, Outcome). For the selected patients in the literatures, cytological and pathological examinations validated the diagnosis of non-metastatic PCa regardless of the nationality and race. No patients had serious comorbid conditions. Inclusion criteria for the control group: neo-adjuvant hormonal therapy including RT or NHT before RT) and RCTs control group of traditional RT or RP alone. Under test conditions, we compared the clinical efficacy and safety between two groups. The studies comparing the OS, PSM and DFS between NHT plus RP and RP alone groups were chosen. Those comparing the OS, DFS and clinical DFS between NHT plus RT and RT alone were also included.

Retrospective study, cohort study and case report were excluded; the paper types of letter and summary were also excluded; the sample size was limited; the clinical efficacy was not sufficient to obtain useful data.

Multiple parameters were extracted from each study including the name of the first author, published date, clinical characteristics of the patients, sample size and results (Table 1). Data extraction was performed by two independent investigators.

Data analysis was described by OR and 95% CI. The heterogeneity of tests was analysed by χ2 test and I2 test. If there was no heterogeneity (P>0.10, I2<50%), the fixed effect model was used for further analysis. OR values and 95% CI results should be divided into OR>1 and 95% CI indicating the OS of combined treatment was significantly higher than that of traditional treatment; OR<1 and 95% CI suggesting the OS of traditional treatment was higher than that of the combined therapy; OR=1 representing no statistical significance between two interventions.

Quality evaluation of the selected studies

After study screening according to the exclusion criteria, 18 literatures consisting of 6223 PCa patients were retrieved in this study. The details of the literature screening process were illustrated in Figure 1. Among 6223 participants, 3407 patients were divided into neo-adjuvant hormonal therapy group, and 2816 receiving traditional treatment. The follow-up times of all the studies were not exactly the same, but the follow-up times of most studies were at least 3.7 years. The baseline characteristics of patients between two groups were comparable (Sheet 1). The characteristics of each experiment were illustrated in Sheet 2. All the selected studies were RCTs. Only one study mentioned the lost follow-up rate and reasons for it [12]. No experiment described the blind method of surgical intervention. 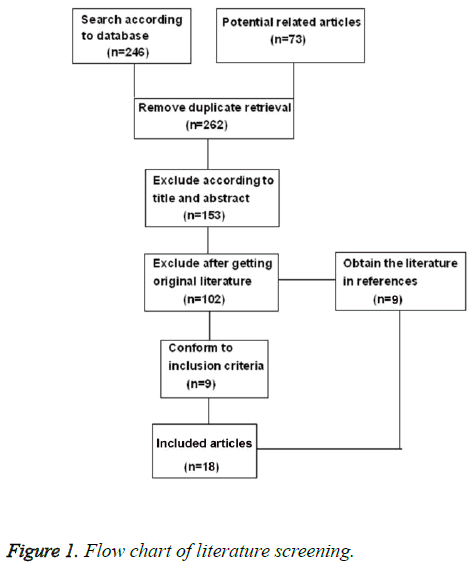 We applied 19 RCTs for evaluating PSM rate. In these studies, we did not found obvious heterogenicity (P=0.17, I2=32%), so the fixed-effect model could be used for analysing the effect value size. PSM rate of neo-adjuvant hormonal therapy was significantly lower than that of traditional treatment (OR=0.31, 95% CI=0.21-0.39, P<0.005), as shown in Figure 3.

One study [17] attempting to assess the comparison between the effect of NHT and pathologic changes of simple prostatectomy when PSA recrudesced, and defined PSA recurrence are according to the existing data. While, the average follow-up time (<7 months) was not enough for the study, so these information did not appear to be sufficient for the complete statistical analysis.

Figure 5: Meta-analysis of the negative rate of biochemical test after two therapeutic interventions.

Three meta-analyses assessed the function of neo-adjuvant hormonal therapy in limited PCa [7,19,21]. However, the test criteria and objective of this study were different from previous studies. Our study had demonstrated that neo-adjuvant hormonal therapy yielded higher clinical efficacy in the treatment of PCs compared with the traditional treatment.

Metal-analysis showed that most individual studies had obvious heterogeneity. We thought the heterogeneity could attribute to the following factors: different kinds of drug, dosage, deviation of hormone distribution, the definition of biochemical recurrence, changes in patient characteristics and follow-up time. Laverdiere et al. [19] defined biochemical recurrence as the continuous increase in serum PSA levels for twice. According to Vancouver regulation, at least 1.0 and>1.5 ng/ml. On the contrary, Denham et al. [14] used Houston law to defined biochemical disorder as the lowest measuring point of PSA level increased ≥ 2 ng/ml after treatment. Our metaanalysis study indicated that OS, PSM, bDFS were increased obviously after receiving neo-adjuvant hormonal therapy, which properly suggested NHT could significantly improve pathological outcomes and biochemical recurrence index, such as PSM and serum PSA level, indicating that the treatment results with pathological and physiological index were the effective selection for evaluation of clinical effect. However, the significance difference in DFS and cDFS between two groups was not found in this study. Considering the prognostic factors for progression of systemic disease, Shelley et al. [13] found that Gleason rating system indicated the risk of systemic disease progression after NHT and prostatectomy treatment. The OS of patients receiving neo-adjuvant hormonal therapy followed by RT or RP was longer than that of RT or RP alone. In addition, clinical benefits of neo-adjuvant hormonal therapy plus RT and RP included a significant improvement in the local control of non-metastatic high-risk PCa patients.

Classification analysis of the groups with different risks indicated that the advantage of neo-adjuvant hormonal therapy was more obvious in high risk PCa patients. Nevertheless, clinical significance of these results was limited by different risk. So, the reliability of the proposed method remains to be validated by subsequent research. We failed to provide convincing evidence to prove the bias risk of test identification criteria and random measurement was low or high and the quality of evidence analysis in summary. In addition, it was uncertain that whether the inspector was blind in the classification of all research information, some authors were unable to report all meaningful results. So the results might depend on report bias, and the loss of information also leaded to the potential over-valuation of the observed effects. The survival analysis of the published literature tended to support NHT plus RP or RT [22-24]. Although the OS was increased significantly in these experiments, the long-term bDFS value was still uncertain which might not be interpreted into a survival advantage. Due to the impact of the risk duration, it seemed that PCa patients could survive for 7 years after receiving combined treatment. Relevant studies of Asia population are urgently required. Clinical efficacy and safety should be balanced by the current information. The indicators that we need to pay attention include PCa grading, risk group differentiation, gender, life expectation, body function, incretion and metabolism.

Luteinizing Hormone Releasing Hormone Agonist (LHRHa) analogues are used in many new adjuvant setting tests, and the function of peripheral anti-androgen is still unclear. Recently developed drugs play their role through androgen suppression, such as miscellaneous Lu amine and abiraterone will play an important role in the future. Similarly, these drugs are believed to provide more effective androgen clearance to fight against prostate cancer cells. But it needs more researches and studies to explore whether they can lead to a significant therapeutic advantage, such as restrained tumor growth or/and toxicity reduction. In addition, the above agent should be related to life quality, adverse effect and patients’ drug burden, and these parameters cannot be analysed in this study. The doctors should make appropriate treatment strategies for patients according to patients’ physical condition, financial situation and personal willingness.

This meta-analysis indicated that for the middle to high level PCa patients, using NHT plus RT/RP treatment was better than simple RT/RP treatment. The overall survival rates, distant recurrence, bDFS, biochemical disorder and other specific indicators all had significant improvement. Even considered the limitation due to the lack of research and had bias risk. The result of this study also had important guiding significance for middle and high risk PCa patients in clinical treatment. With regards to combined NHT with RP or RT treatment, the study indicated that used the used developed drugs could locally reduce tumor load in patients with middle or high level PCa and restrain the growth of prostate cancer cells through androgen.