The results obtained from the different fractions of metabolites were selected for in vivo acute toxicity studies. The toxicological study revealed that the test samples are safe for animal use up to 800 mg/kg. The test sample showed dose dependent anti-nociceptive potentials, the significant effect was observed with 500 and 800 mg/kg b.w dose. The analgesic effect of diclofenac sodium (standard drug) was greater than test sample. The significant (P<0.01) anti-nociceptive potentials was noticed at 800 mg/kg b.w. of the animal for normal saline (35.50 ± 0.84), chloroform (29.67 ± 1.22), ethyl acetate (30.67 ± 1.22) and (29.00 ± 0.93) chloroform fraction of L. plantarum secondary metabolites. The test sample reduced the motility of GIT in mice. The reduction in GIT motility is dose dependent and maximum effect was produced by 800 mg/kg dose. The test sample caused different degree of movement of charcoal meal in the intestine i.e. 24.17, 20.17 and 17.83 cm at the tested doses of 200, 500 and 800 mg/kg, respectively.

The term probiotic refers to dietary supplements containing beneficial bacteria. The bacteria such as Lactobacillus, Bifidobacterium and yeasts such as Saccharomyces are wellknown probiotics [1]. The oral consumption of probiotics exerts a protective effect on the gut flora and confers beneficial effects on microbial disorders of the gut, as indicated by multiple studies [2]. The best sources of probiotic bacteria are fermented dairy products. Probiotics sector is a rapidlygrowing part of food industry, the annual global sales of probiotic products is expected to rise up to $42 billion by 2018 [3,4].

While going through the literature, Vitis vinifera (grapes) and Spinacia oleracea (spinach) are selected as a source of probiotic bacteria in the current study.

It may survive over winter in tempera te region of Pakistan. S. oleracea used for chemoprevention of cervical cancer, apoptosis (cell death), liver damage and control of bleeding in jaundice. The V. vinifera belongs to family Vitaceae and in Pakistan over 77% are grown in Khyber Pakhtunkhwa. The microenvironment and nutritive profile of V. vinifera and S. oleracea are quite conducive for probiotic bacteria to multiply [9]. The V. vinifera traditionally used to treat constipation, indigestion fatigue, kidney disorder and muscular degeneration. The presence of probiotic bacteria in dairy products has long been established but the occurrence of Lactobacillus species in fruits and vegetables has rarely been focused. Patel et al. have extensively reviewed the immunomodulatory and anticancer potential of probiotics [10].

Most of the species of lactic acid bacteria, which were isolated from raw or spontaneously fermented vegetables and fruits like cabbage juice, Tomatoes, marrows, carrots, cucumbers, eggplants, red-beets, capers, pineapple, plums, kiwi, papaya, fennels, cherries, cabbages, cereals, steamed rice [11]. In this study, Vitis vinifera (grapes) from the family Vitaceae and Spinacia oleracea (spinach) from the family Amaranthaceae are selected as a source of probiotic bacteria in the current study. The microenvironment and nutritive profile of V. vinifera and S. oleracea are quite conducive for probiotic bacteria to multiply [12]. So, it is highly relevant to investigate the in vivo pharmacological activities of such probiotics and its secondary metabolites. In the present study, we aimed to explore and evaluate bioactivities including acute toxicity, gastrointestinal motility test and analgesic activity of Lactobacillus’s secondary metabolites from fruits (V. vinifera) and vegetables (S. oleracea).

The selected probiotics source in this study was V. vinifera and S. oleracea, collected from Charsadda, Khyber Pakhtunkhwa, Pakistan. The samples were collected in clean plastic bags and carried to the laboratory for analysis within 24 hours of purchase.

The grapes and spinach samples, carried to the laboratory were washed with water followed by a final rinse with distilled water. The samples were treated independently in sterile Petri plates. The media was autoclaved and then poured into sterile plates and allowed to solidify. One mL of V. vinifera and S. oleracea extract obtained was inoculated into 9 mL of sterile MRS broth were kept for 48 hours at 37°C at 120 rpm in shaking incubator. Sample was then isolated, diluted and separated on MRS agar plate. Colonies were purified by subculturing on MRS agar plates and further characterized [13].

The cultures were identified on the basis of criteria suggested by Harrigan [13].

MRS broth media were prepared in 1 L of distilled water and 100 mL of it was poured in each 250 ml Erlenmeyer flasks. The flasks were plugged and autoclaved. The culture flasks were incubated in shaking incubator at 28°C for 7 d at 180 rpm. After incubation, few drops of HCl were poured into flasks and shaken vigorously to settle the media and increase the polarity of the aqueous phase. Media was filtered through filter paper and the filtrate was taken. Equal volume of ethyl acetate (EtOAc) and chloroform (CHCl3) was added to the filtrate, and then shaken vigorously for about 20 minutes in a separating funnel. The organic phase was separated and washed with 2 M brine solution followed by purification with anhydrous sodium sulfate (Na2SO4). The organic phase containing the metabolites was dried in a rotary evaporator at 45°C and 150 rpm. The extract was taken in glass vials from evaporator by adding few ml of methanol, followed by filtration through a filter of 0.2 μm of mesh size. The filtrate was dried in a water bath and extract was then used for pharmacological assays [14].

For the experiment, Adult Swiss albino mice (BALB/c) from either sex, weighing between (12-30) g, were collected from animal sources department NIH (National Institute of Health, Islamabad). The animals were maintained under normal laboratory conditions and kept in standard polypropylene cages at room temperature of 35 ± 2°C and relative humidity. The Swiss Albino (BALB/c) mice of either sex weighing 25+10 g were used for determining the acute toxicity, GIT motility test, and analgesic test.

The acute toxicity assay was performed according to the reported procedure [15]. Animals were divided into six groups (n=6). The secondary metabolites from the microbial isolates of the V. vinifera and S. oleracea samples at 200, 500, 800 and 1500 mg/kg (body weight of mice) was used as test dose. After intraperitoneally (i.p.) administering the test doses, the animals were kept under observation for 24 h. The number of survived and dead animals was noted by calculating percent mortality. The groups received the following treatments. Antidiarrheal/ gastrointestinal motility test (GIT motility).

The GIT motility test was performed according to Marona and Lucchesi [14], with slight modifications where necessary. All the mice were kept in food deprivation for 3 h but only accessible to water and they were divided in six groups, each group containing 6 mice (n=6). Then the mice were weighed and marked. Control solution (5 ml/kg), sample solutions of 200 mg/kg, 500 mg/kg and 800 mg/kg of all the extracts were administered by oral gavage. After 90 min, 0.3 ml of charcoal suspension was administered to all the mice. After 60 min mice were provided with free access to food. Then the mice were observed at 5 min intervals until feces with charcoal were eliminated. Charcoal was observed on the feces using normal light when it was easily visible, or using a microscope to help the identification of the black spots.

The acetic acid induced writhing test was used to know about analgesic effect of secondary metabolites of probiotics [15,22]. The selected test samples were screened for the presence of analgesic effect. These animals were divided into five different groups (n=6). Group I and II were served as negative and positive control, respectively. Normal saline at a dose of 10 ml/kg (body weight) was administered to Group I, while Diclofenac sodium at a dose of 10 mg/kg (body weight) was administered to Group II. They were fed according to recommended guidelines, but food supply was stopped 2 h before the start of activity [15,16]. The crude extract was administered to the remaining groups (III, IV and V) at a dose of 200, 500 and 800 mg/kg (body weight) intraperitoneally (i.p.). After 30 min of the above-mentioned treatments 1% acetic acid was administered to all groups through intraperitoneal route. Then after 5 min of acetic acid injection abdominal writhes (constrictions) were started to count for next 10 min. The percent analgesic effect was calculated as per given formula.

Data was expressed as Mean ± SEM (Standard error of Mean). The results were analyzed statistically by ANOVA followed by Dunnet’s test. Results below p<0.05 and p<0.01 were considered statistically significant.

The animals were observed for 24 h for mortality, but no dose was found to be toxic and all doses were found to be safe. Therefore, the test samples were considered to be relatively safe up to a dose of 200-1500 mg/kg body weight of mice. The results are shown in Table 1. 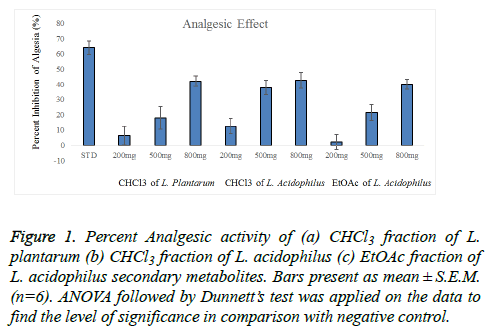 Table 3: The effect of CHCl3 and EtOAc fractions of L. plantarum and L. acidophilus on GIT Motility.

The present study mainly focused on the isolation of Lactobacillus’s secondary metabolites from fruits (V. vinifera) and vegetables (S. oleracea) and to confirm their use for the management of pain and diarrhea on scientific basis. The various strains of Lactobacillus have already been isolated and characterized from dairy sources but literature is limited regarding fruits and vegetables [17]. Therefore, we tried to explore the potential of Lactobacillus from V. vinifera and S. oleracea. The MRS broth and agar media is used for initial culturing, culture enrichment of Lactobacillus sp. and then they were characterized as suggested by Harington [12]. We isolated the L. plantarum and L. acidophilus from broth culture. Furthermore, we fractionated these cultures with chloroform (CHCl3) and ethylacetate (EtOAc) for its secondary metabolites, which were finally assessed for analgesic and antidiarrheal effect.

The acetic acid induced pain model is a common, rapid, sensitive and easy method for the determination of peripheral analgesic effect of plant extracts and other drugs as well [18]. The chemicals produced in peritoneal fluids are responsible for pain which may appear in the form of abdominal constrictions. Writhing inhibition by various substances may be involved in the decreased production or inhibition of prostanoids, which is considered for pain inhibition through peripheral mechanism [19,20]. It is suggested that the test sample its peripheral analgesic effect through inhibition of abdominal receptors. The active chemical(s) present in test sample produced analgesic effect in the form of reduction in abdominal constrictions (writhing). Therefore, we evaluated the analgesic potential of our test fractions by using acetic acid induced writhing test. Our data showed analgesic potential of probiotics and their fractions of secondary metabolites to much or less extent in all animal models used. The analgesic effect of fractions was found to be dose dependent i.e., maximum at dose of 800 mg/kg, however, all the fraction exhibited less analgesic potential than produced by standard drug i.e. diclofenac. The predominant analgesic effect among all fractions was exhibited by CHCl3 fraction of L. plantarum. Previous studies have reported analgesic, antidiarrheal and anti-inflammatory potentials of probiotics [21] other several flavone derivatives [22].

Multiple comparison tests revealed that Lactobacillus fractions at concentration of 800 mg/kg significantly reduced the GIT motility. The test sample may cause relaxation of intestine by interaction with M3 receptor found in small intestine, where acetylcholine can act and activation of M3 receptors will lead to increase contraction [20,21]. The effect of antispasmodic agents is to alleviate the symptoms of abdominal cramps. The test samples reduce GIT motility and can be used for the management of diarrhea and in abdominal spasm.

In the present study, we concluded that beneficial Lactobacillus strains can be isolated from fruits (V. vinifera) and vegetables (S. oleracea) like L. plantarum and L. acidophilus. These lactobacillus strains produced secondary metabolites which are effective to produce analgesia and alter GIT motility.