A histoarchitectural study of varicocele.

Varicocele is an abnormal enlargement of vein of pampiniform plexus vein draining the testis. The upward direction of flow of blood is believed to be maintained by the presence of valves within the veins. Defective valves or compression of the veins by adjacent structures can cause dilatation of the veins of pampiniform plexus leading to formation of varicocele. The present study was carried out to see the effect of varicocele on histoarchitectural changes within the wall of vein of pampiniform plexus. The formalin-fixed tissue were reprocessed for paraffin embedding and stained with haematoxylene and eosin and Weigert stains and observed under light microscope The varicocele group showed dilatation of lumen along with thickened wall. The increased thickness of wall may be due to increased in thickness of both tunica intima and tunica media. . In many cases the tunica intima showed irregular folds along with discontinuity of the endothelium. The tunica media shows increased thickness due to increased in both collagen fibers and smooth muscle cells.

Varicocele is a pathologic dilatation of the pampiniform venous plexus of the spermatic cord that occurs in approximately 15–20% of males and in up to 40% of infertile males [1,2]. This condition occurs most frequently on the left side and can cause decreased testicular function [2]. Some patients may have scrotal pain and swelling but more importantly, varicocele is considered to be a potential cause of male infertility [3]. Tough the causal relationship remains an unsettled issue, improved fertility and sperm quality have been reported after various methods of treatment including occlusive treatment for varicoceles [4,5]. On physical examination, large varicoceles are easily identified and described classically as “bag of worms” surrounding the testis. The dilatation of spermatic veins can be assessed by Valsalva manoeuvre. Doppler ultrasonography allows accurate diagnosis of varicoceles even at subclinical stage of varicocele [6,7,8].

There are several theories on the aetiology of varicocele ranging from anatomical reasons e.g., the angle at which the left testicular vein enters the left renal vein and a functional deficiency of valves at the junction of the testicular vein and renal vein [9,10,11,12]. Despite the existing studies and ongoing research the mechanisms of varicocele development remains unresolved. Recently it has been suggested [13] that an anti reflux mechanism can be due to unique smooth muscle organization of spermatic veins, consisting of an outer longitudinal layer, an inner circular layer, and fibres branching from the outer to the inner layer. Only few studies have evaluated the structure of spermatic veins in varicocele patients [3,13,14] showing difference in observation and consequent interpretation. Several authors described increased thickening of the smooth muscle layer and extracellular matrix in patients with varicocele [3,14] while others identified progressive degradation of the outer longitudinal smooth muscle layer in the tunica adventitia [13]. The aim of this work was to compare the normal anatomic structure of the veins of the pampiniform plexus and to assess possible morphologic alterations in patients with varicocele through a histopathological study and also to check if such alteration could be considered a causative factor for development of varicocele.

The present study was conducted on 15 patients undergoing varicocelectomy for idiopathic left and or right sided varicocele. The patients’ age ranged between 23 and 35 years. This study also included a control group of subjects with no varicocele. The biopsy specimens were obtained from both groups after signing an informed consent form. Specimens obtained were immediately fixed in 10% neutral buffered formalin and processed for paraffin embedding. Sections were stained with H & E and Weigert’s stain and visualized under light microscope to analyse the morophlogy of veins in control and varicocele.

Histopathological examination of the wall of normal spermatic veins with a large diameter showed a tunica intima consisting of endothelial cells overlying a sub endothelial layer. Varicocele veins exhibited big differences in diameter within the same vein therefore, on the basis of the presence or absence of the outer smooth muscle layer, the spermatic cord veins were sub classified into two groups: large veins presenting an outer smooth muscle layer and small veins without such a layer. The tunica media showed a continuous circular smooth muscle layer separated by scarce connective tissue. The adventitia was well-identifiable and presented vasavasorum and bundles of longitudinal smooth muscle cells, separated by more connective tissue than in the tunica media.

Both H & E stained and weigert stain sections showed a high variability in the organization of the vessel wall. All sections showed dilatation of the lumen and most of them showed thickened wall. The increased wall thickness was due to increase in the thickness of intima and media. In many cases the intima appeared folded with irregular surface suggestive of discontinuity of endothelium at many places. The adventitia and media showed an increase in the connective tissue with increase thickness due to increase in both collagen and smooth muscle cells. Smooth Muscle cells of layers of spermatic vein appeared degraded and replaced by collagen fibre due to varicocele. 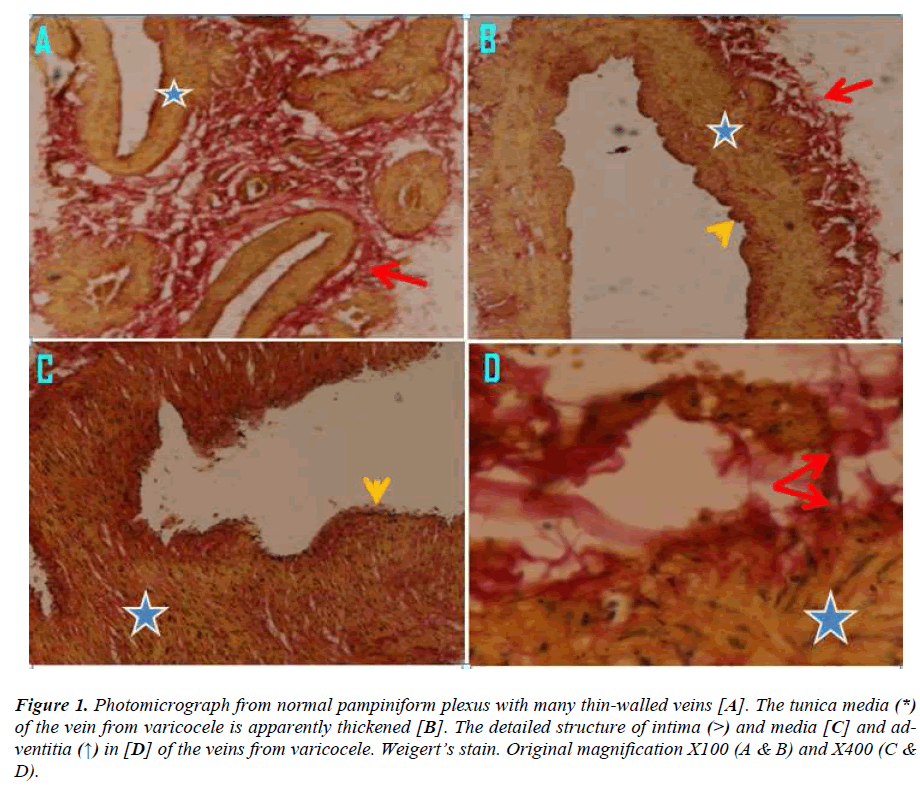 Figure 1:Photomicrograph from normal pampiniform plexus with many thin-walled veins [A]. The tunica media (*) of the vein from varicocele is apparently thickened [B]. The detailed structure of intima (>) and media [C] and adventitia (↑) in [D] of the veins from varicocele. Weigert’s stain. Original magnification X100 (A & B) and X400 (C & D).

Varicocele is believed to develop as a result of dilatation and tortuosity of veins of the pampiniform plexus secondary to retrograde flow into the internal spermatic vein (ISV). Varicocele is also considered to be a potential cause of male infertility [1,2,3] and microscopically sepermatogenic arrest has been found to be the most frequent anomaly seen [15]. In recent studies when compared with the non operated control groups clearly indicated that varicocelectomy improved fertility and sperm quality [8,11,12,16,17]. The mechanism of varicocele development still remains enigmatic [2,3,9,13,14]. To date there have been only a fewer studies on the microscopic structure and histology of normal spermatic veins and varicocele veins. The pampiniform venous plexus consists of veins with different diameters and different vein wall anatomy [18,19]. However, there is no detailed analysis considering these differences in spermatic vein histology and comparing them with varicocele histopathology. This study was aimed at comparing the normal histology structure of the veins of the pampiniform plexus and assessing any possible morphologic alterations in patients with varicocele and whether these alterations could bear explanation for the mechanisms underlying pathology. According to N.Sobhy et al [20] histopathological examination of pampiniform plexus veins of the control group revealed that the structure of large spermatic veins – which are the veins responsible for the main venous backflow into the testicular and renal vein – demonstratesd a layer of circular smooth muscle cells within the tunica media and another longitudinally arranged smooth muscle bundle in the adventitia, which was thinner than that in the media. In contrast, the wall of small spermatic veins showed no outer longitudinal smooth muscle fibres in the tunica adventitia in both varicocele and control subjects, however, these veins are not the ones primarily involved in varicocele.

The structure of normal spermatic vein wall has been evaluated only in few studies [13,14]. The wall of normal veins was reported by to be thin and constituted by only few SM cells with rich connective tissue [14]. The SM fibres were shown to be primarily circular in configuration, and loosely arranged [14] ore recently, in a larger study involving patients undergoing orchiectomy for prostate cancer [13] reported that the normal venous wall shows a longitudinal SM layer within the adventitia and a circular layer within the media. For the first time [13] described in the serial sections the presence of oblique SM cells branching from the outer longitudinal to the inner circular layer. The present study observation supports the findings of [13] using detailed and reproducible morphologic methods, in a more appropriate population of patients (taking age similar in control group to varicocele subjects).

In contrast to the control group, histopathologic examination of the wall of large spermatic veins showed an increase in the connective tissue within the adventitia and a progressive reduction of the outer longitudinal smooth muscle bundles that run parallel with increasing severity of varicocele. The difference among findings of different authors might be ascribed to the different levels of dissection of spermatic veins performed to retrieve the segments: suprainguinal, [3,14] and subinguinal spermatic veins [13].

Two pathophysiological hypotheses can be drawn according to the morphological findings described in the different studies. The increase in the pressure within the spermatic veins would cause the mechanical distension of the venous wall and the release of endothelial mediators, which might cause the increase in the number of SM cells and the deposition of extracellular matrix, which could ultimately cause an alteration of blood flow and reflux. [14]. According to the data reported by some workers [13] and confirmed in the present study, indeed, the alterations in the complex muscle structure might be caused by hypoxia caused by the reduction in the number of vasavasora.

Our results show marked reduction in varicocele vein vascularization and innervations, in addition to degradation of the outer longitudinal smooth muscle coat. Whether a primary disturbance of the angiogenic vascularisation (vasa vasorum) or innervation of the vein wall is involved in these anatomic changes of the varicocele veins needs further verification.

Because of these muscle abnormalities some workers have considered [30] that the primary defect might be in the SMCs of the vein wall and this defect could be genetically determined [22]. Another postulation reported by others [31] was that after disruption of intimal endothelium lead to the SMCs exposure to blood flow and thus their function might be modulated by changes in the local hemodynamic environment. In another study, varicose vein sections showed also degenerative changes in the adventitia evidenced by fragmentation of collagen and vacuolization of adventitial SMCs [32].

The current study demonstrated that the adventitia and media showed an increase in the connective tissue with increase thickness due to increase in both collagen and smooth muscle cells. An outer adventitial longitudinal smooth muscle layer exists in addition to the normal circular smooth muscle layer of the tunica media in normal large spermatic veins. Varicocele also showed intimal changes, disturbance in the connective tissue components and smooth muscles. Thus contractile function becomes disturbed due to morphological changes of the venous wall that may lead to impairment of blood return of the veins, promoting the development of varicocele. 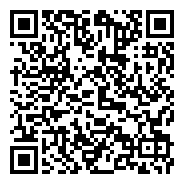