An ectopic pregnancy is one in which the embryo is implanted outside the uterine cavity. The incidence of such pregnancy has markedly increased in the past decade. This may be a reflection of prompt diagnosis due to easy availability of non-invasive diagnostic tools such as ultrasonography. However, literatures on histarchitectural changes of early ectopic pregnancy are rather scarce and therefore, the present study was conducted on 20 patients of ectopic pregnancy. The various parameters included in this study were location of ectopic pregnancy, side of corpus luteum and histological features of ectopic pregnancy. It was found that the corpus luteum was noticed on the contra lateral side in 5 cases (25%). The trophoblast invasion was predominantly intralumial. Intratubal hemorrhage was generally proportionate to trophoblastic spread which leads to marked destruction of tubal wall. It was concluded that only early diagnosis and treatment before rupture still remains the best management of ectopic pregnancy.

In an ectopic pregnancy the embryonic implantation occurs outside the uterus most commonly in the fallopian tube. An ectopic pregnancy is a medical emergency, if not treated in time can lead to fatal consequences. In normal pregnancy, the fertilized ovum enters the uterus through fallopian tube in uterine cavity and settles into the uterine mucosa where it has plenty of room for its growth and development. About 1% of all pregnancies are noticed in an ectopic location with implantation not occurring inside of the uterus. Of these ectopic pregnancies 98% occur in the fallopian tube. The incidence of ectopic pregnancy has markedly increased in the past decade [1]. The implanted ectopic embryo burrows actively into the tubal lining and its vessels which is responsible for bleeding. The pain perceived is believed to be caused by prostaglandin released at the implantation site and also by the free blood in the peritoneal cavity acting as local irritant. Despite many notable successes in field of diagnosis of the ectopic pregnancy, it remains the source of serious maternal morbidity and mortality.

A study was conducted on 20 patients of age ranging between 28 to 40 years and having ectopic pregnancy of 2-3 months of gestation. In addition to its presence, the location of corpus luteum was also noted. The excised part of tissue was taken and fixed in 10% formalin solution and processed for light microscopy. Each block was serially sectioned at 6 micron. .Every tenth section was mounted for histological study and stained with haematoxylene and eosin and observed under light microscope.

The ectopic pregnancy was found on left side in 9 cases and on right side in 11, but the corpus luteum was found in all cases by inspection. Nineteen pregnancies were in ampulla and one in infundibulum. The lumen was found to be tortuous in eleven cases as compared to tubal lumen in control tube removed in other benign surgical cases. All tubes showed evidence of trophoblastic proliferation invading maternal tissues resulting in extravassation of significant amount of maternal blood. The orientation of implantation with reference to major blood vessel appeared to be random. On microscopic examination of slides, the predominant pattern of spread of the trophoblast and the hemorrhage could be classified as predominantly intraluminal, predominantly extraluminal or combined. The maternal blood vessels were invaded by trophoblast soon after initial implantation. In predominantly intraluminal trophoblastic proliferation (Fig, 1C) the pattern of spread of trophoblast and pattern of the hemorrhage in majority of cases was proportionate to each other. In majority of cases the tube was not ruptured and the blood often leaked out of abdominal ostium of the fallopian tube after filling the lumen. The tubal enlargement was due to blood clot rather than from conceptual mass. In these cases three types of endosalpinx were observed. However, sometimes the entire tubal epithelial lining was intact. In other cases the tubal epithelium was either eroded by invading trophoblast or remained as discontinuous islands located circumferentially along the periphery of dilated tubal lumen. Luminal dilatation was caused by the presence of the gestational sac with or without embryo, by varying amount of trophblastic tissue but primarily by maternal blood causing destruction and disruption of fallopian tube. The predominantly exatraluminal trophoblastic proliferation (Fig, 1D) was found in minority of cases. But in majority of cases it was associated with rupture of fallopian tube. The trophoblastic tissue was proliferated in sheets, between the tissue layers. The accompanying hemorrhage dissected the tissue layers and compressed the tubal lumen. In cases of spread of the combined pattern, spread of the trophoblastic infiltration and hemorrhage were found both intra luminal as well as extra luminal sites. 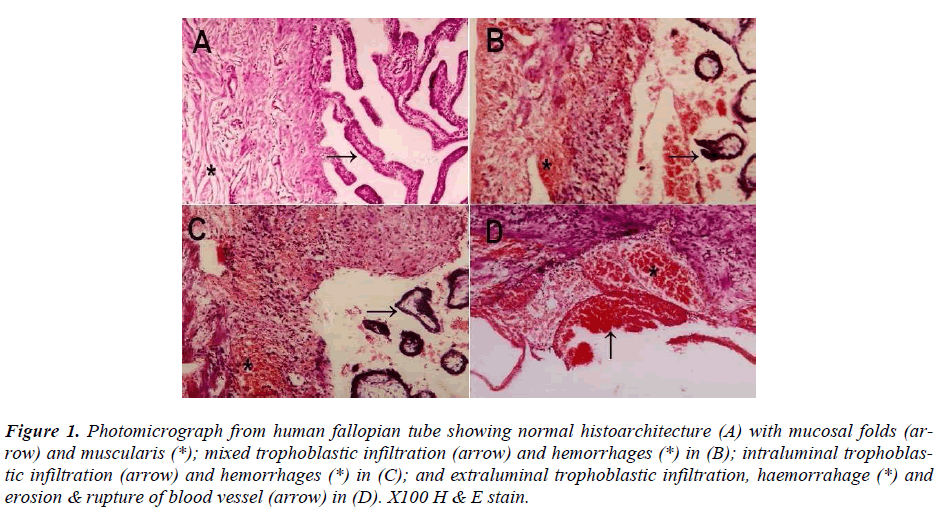 The endosalpinx was well preserved every where except at the place where initial implantation took place and lead to breach in the epithelium. In this area the trophoblast eroded the entire endosalpinx but a portion of the epithelium was normal in majority of cases. Dilatation of the mucosal lymphatics, stromal edema and lymphocytic infiltration of the lamina propria were common near the implantation site (Fig. 1B). Changes in the myosalpinx appeared to depend upon the stage of pregnancy and wheather or not predominant trophoblastic growth proceeded to intraluminal or extraluminal sites. Where luminal distension was less marked, swelling and edema of the myosalpinx were commonly seen as marked circumferential lymphatics distention. When hemorrhages occurred into myosalpinx blood filled spaces were also visible. When luminal distension was marked the myosalpinx became stressed and compressed. Trophblastic invasion into the myosalpinx ranged from localized penetration by anchoring villi to complete destruction of muscularis. In majority of cases trophoblastic invasion was limited to luminal aspect of the myosalpinx along with inflammatory cell infiltration. The serosa and subserosa overlying the site of ectopic pregnancy was usually thinned out so much so that it became only single layer of mesothelial cell closely applied to a thin layer of underlying connective tissue which in turn interfaced with the product of pregnancy. The mesothelial swelling was common along with lympocyte infiltration of both serosa and subserosa. In cases of rupture (Fig. 1D) the serosa was breached by the invading trophoblast which eroded through the tubal tissue. In many cases, the invading trophoblast invaded subserosal blood vessel

The present study provided opportunity to extend some valuable information regarding tubal pregnancy, its mode of occurrence and mechanism of invasion and infiltration of the tubal wall. It is believed that mechanism of implantation is that the ovum is picked up by the fimbriated end of fallopian tube which is held in close contact with ovary by the fimbria ovarica which sweeps across the surface of ovary during ovulation. The ovum is picked up in its ciliated fimbria and conducted into the infudibulum of the tube. In addition to this the ovum pickup can also occur from pouch of Douglas but the later mechanism is infrequent because under normal circumstances the ovum pickup is direct from the ovarian surface to the ipsilateral tube. When normal human fallopian tube is flushed during the first three post ovulatory days to recover oocytes, the search for oocytes is successful in 65% of cases. More than 95% of recovered oocytes are found in the tube ipsilateral to the corpus luteum [2]. But in those cases where the corpus luteum is found on contra lateral side [1] it has been speculated that some time ovum pick up by fimbria fails and thus ovum is released into pouch of Douglas. Possibly a delayed ovum pickup allows fertilization which leads to advance preimplantation development so that an expanded blastocyst finds difficulty in crossing the isthmus and lodged in the ampulla. The other possible mechanism suggested is that ectopic pregnancy may be due to dysfunction of ovum transport, the ovum is returned to the peritoneal cavity by retrograde transport [1]. Ectopic pregnancy is due to delayed ovulation and fertilization, which fails to suppress menstruation leading to flushing of fertilized oocyte from uterus to any one of the fallopian tube due to uterine contraction [3,4]. This increases the chances of entry of the fertilized ovum into the opposite tube. Thus, if tubal pregnancy develops it may be found on the opposite side of corpus luteum. Because of this fact it is important to establish the relationship of corpus luteum with laterality of the ectopic pregnancy. These relationship related to menstrual regurgitation are important because it explain the larger fetus than would be predicted from menstrual date [5] has suggested that fallopian cilia is seen to be reduced following ectopic pregnancy, leading to a hypothesis that cilia damage in the fallopian tube is likely to lead to an ectopic pregnancy. Some researchers [6] has concluded that tubal ectopic pregnancy is caused by a combination of retention of the embryo within the fallopian tube due to impaired embryo–tubal transport and alteration in the tubal environment allowing early implantation to occur.

The ectopic pregnancy induced changes in the histology of fallopian tube have not been extensively studied. Conservative management is not specifically taken has effect of anatomic changes in the histology of tubal pregnancy and its effect on future of fertility of the patient. As far as the management is concerned it varies from patient to patient and it depends upon the age of gestation, site and time of presentation after rupture of ectopic pregnancy. Fimbrial evacuation of tubal pregnancy is easy to perform but it has a high chance of recurrence rate; otherwise if the gestation sac is large or extra luminal it can not be evacuated through the lumen and forcible evacuation has met with increased destruction and further hemorrhage. In this situation first try linear salpingectomy and if tubal destruction is large and old case of rupture, segmental resection of the affected tube is better management. Significant incidence of blighted ovum (anembryonic pregnancy) has been observed in the tubal pregnancy but its association with the rupture of the tube with presence or absence of embryo has not been confirmed [7]. If the observations concerning the effects of the trophoblast and the hemorrhage on tubal morphology are confirmed, then segmental resection becomes the method of choice in reparative surgery for ectopic pregnancy. In the past salpingectomy was treatment of choice for management of tubal pregnancy. Now the current emphasis is on preserving the reproductive function along with advancement in tubal surgery and early diagnosis has shifted the attention toward conservative surgical management. Linear salpingotomy and segmental resection are now emerging as new method of management of ectopic pregnancy in order to preserve the fertility of the patient.

Tubal pregnancy has been thought to implant and grow within the tubal lumen. But from the present study it appears that in the tubal implantation the embryo penetrates into the lamina propria and muscularis to become extraluminal [8]. The trophoblastic infiltration is predominantly intraluminal. But extra luminal and mixed pattern of trophoblastic infiltration was also found in some cases.

Intratubal hemorrhage usually parallel to trophoblastic spread often leads to marked tubal destruction. The prognosis of fertility following ectopic pregnancy mainly depends upon prior history of infertility [9]. Rate of fertility may be better following salpingostomy than salpingectomy [10]. It was concluded that early diagnosis and treatment before rupture still remains the main option of management.