A case is presented of a 40 year old fertile man with a history of unilateral cryptorchidism who presented with a lower abdominal mass. On investigations a giant intraabdominal seminoma was diagnosed. Laparotomy and complete excision was carried out. The possible association between the undescended testis and cancer transformations is briefly discussed

Cryptorchidism (testicular maldescent), the most common congenital anomaly of the genitourinary tract in males, is encountered in 1% of boys. The incidence increases in subjects with deficiencies of androgen function.1Such an organ is at high risk of torsion, trauma, infertility, and malignancy. A giant seminoma of an intra-abdominal testis in a fertile patient is reported in this case.

A 40-year-old patient, fathering seven siblings, presented to our hospital and was complaining of lower abdominal mass and discomfort for one year. No history of weight Scrotal examinations revealed a normal right testis; whereas, left testis was neither palpable in the scrotum nor in the inguinal region. The laboratory investigations were all normal; apart from a slightly elevated serum beta- human chorionic gonadotropin (β-HCG) 296 mmol/ L. The serum alpha- fetoprotein (α-FP) was within normal limits. The abdominal computed tomography (CT) scan revealed an 18x9x10cm solid mass with central necrosis extending from root of mesentery of transverse colon down to the pelvis. No paraortic lymphadenopathy (Figure 1). No other significant findings. Based on the age of the patient, clinically non-palpable left testis, the abdominal mass and the elevated β-HCG tumor of the intraabdominal testis was, therefore, suspected. Seminoma was the most probable diagnosis. Laparotomy was done through lower midline incision and total excision of the tumour was carried out. The tumour weight was approximately one kilogram (920 grams) (Figure 2). Postoperative course was uneventful. The histopathological examination of the excised tumour confirmed the diagnosis of pure classic seminoma (figure3). Patient was discharged home in good condition after 23 days from admission. After recovery patient received a prophylactic radiotherapy to the retroperitonium by oncologist after six weeks from discharge. At three months from surgery, α-FP was normal (37ng/ml) and β-HCG returned to normal value (12mIU/ml).There was no clinical evidence of local recurrence or distant metastasis after 18-months follow up after discharge. 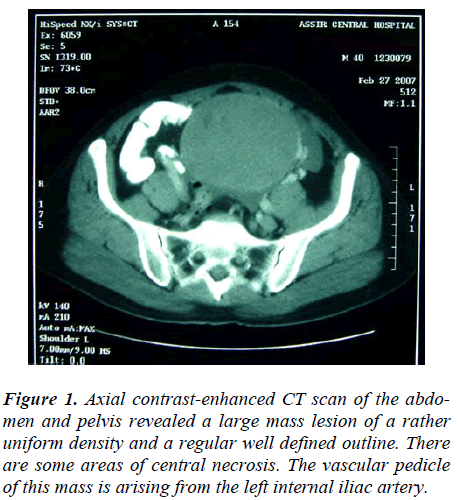 Figure 1: Axial contrast-enhanced CT scan of the abdomen and pelvis revealed a large mass lesion of a rather uniform density and a regular well defined outline. There are some areas of central necrosis. The vascular pedicle of this mass is arising from the left internal iliac artery. 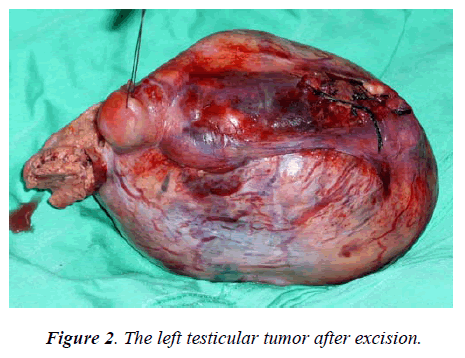 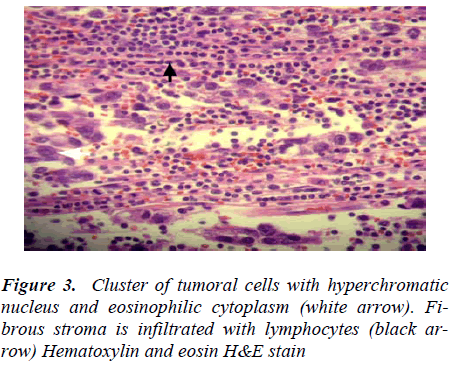 One of every 500 men has an undescended testis that may be associated with complications such as cancer, ischemia, and infertility. The cancer risk of an ectopic testis is 40 times higher than in a normal testis, and an abdominal testis is four times more likely to undergo malignant degeneration than an inguinal testis.2 The cancer of undescended testes peaks in the third or fourth decade of life.3 Seminoma is a germ cell neoplasm of the testis. Pure seminoma is the most frequent cancer in the undescended testis.4 For this reason, testicular cancer should be considered in the differential diagnosis of a retroperitoneal mass in a patient with a non-palpable testis.

In conclusion, early diagnosis and treatment of cryptorchidism can dramatically reduce the risk of testicular cancer and probably preserve the fertility, as well as, the virility of the patient.