A female phenotype with coffin-lowry syndrome.

Coffin-Lowry Syndrome (CLS) is a rare X-linked semi-dominant syndromic genetic disorder that is typically diagnosed in childhood. It is caused by mutations in the RSK2 gene detected in up to 50% of cases. It characterized by moderate to severe psychomotor and growth retardation, characteristic facial features, skeletal deformities and tapering fingers in males. Females are usually much more mildly and variably affected thus more difficult to diagnose. The phenotype in affected females can include developmental differences, obesity, and characteristic facial and skeletal differences. The clinical and radiological findings observed in a 10 year old girl diagnosed with Coffin-Lowry syndrome is reported.

Coffin-Lowry syndrome (CLS, MIM # 303600) is a rare X-linked semi-dominant mental retardation disorder (XLMR). It was first reported independently by Coffin et al. [1] and Lowry et al. [2] and recognized as a novel syndrome of neurocognitive impairment, growth retardation, facial dysmorphism, puffy proximal digits, tapering digits and progressive skeletal changes by Temtamy et al. [3] in 1975. It has an estimated incidence of 1:50,000 to 1:1,000,000 live births. Approximately 70–80% of patients are sporadic cases [4]. It is caused by mutations in a serine threonine kinase RSK2 (RPS6KA3) gene located in region Xp22.2–p22 [5]. The RSK2 gene is expressed in various brain structures, including the cortex, cerebellum, and hippocampus [6]. RSK2 mutations have been detected in approximately 50% of CLS patients and to date, more than 140 RSK2 mutations have been identified (Coffin-Lowry mutation database: http://wwwulpmed. ustrasbg.fr/chimbio/diag/coffin). About 80% of the mutations arise de novo, most of them are private, found in only one family [7,8].

The majority of CLS females have only minimal findings such as mild facial coarsening, obesity and tapering fingers with normal intelligence or mild learning difficulties, however female patients with full manifestation, i.e., mildmoderate mental retardation and typical facial, hand and skeletal malformations are rare and only a few cases have been reported [9-13].

This report aims to describe a case of Coffin-Lowry syndrome in a female patient with fully manifested clinical features and different types of seizures that responded well to Lamotrigine (lamictal) as an antiepileptic drug.

The parents of this 10 year old female were first cousins (double consanguinity). There was a positive family history of severe mental retardation in a sister and a brother of her maternal grandmother, febrile convulsion in her maternal uncle and epilepsy in her maternal aunt. Pregnancy and birth history were uneventful apart from reduced foetal movement. Birth weight was 2.8 Kg. She was noted to be floppy since birth and not to be gaining her expected developmental milestones for age. There was no history of frequent apnoea or respiratory abnormalities. She had repeated chest infections and constipation. At 11 months, she was admitted into a local hospital with gastroenteritis and her brain CT scan showed mild generalized atrophy. She achieved head control at 14 months, sat with support at 18 months, reached for and transferred objects between 16- 19 months, never grasped bottle to feed her self, attained roll-over at 15 months and social smile at 8 months (Figure 1). Though her vision and hearing were apparently intact, her speech was limited to babbling with no clear words. At 26 months she developed repeated episodes of recurrent generalized convulsions, 3-5 times per day, each lasting up to 3 min, with associated myoclonic jerks in addition to episodic staring and twitching of lips lasting for a few seconds. There was no associated cyanosis. She showed limited response on clonazepam. At 3 years of age, September 2002, she was evaluated at our tertiary centre for global developmental delay, hypotonia and seizures. She had dysmorphic features in form of down-slanting palpebral fissures, maxillary hypoplasia, mild hypertolorism, prominent brow, short, broad nose with thick alae nasi and septum, large open mouth, thick everted lower lip, prominent low set ears, long Philtrum, high palate, hypodentia, widespaced teeth, micrognathia, large soft hands with tapering fingers, flat feet, lax ligaments, joint hypermobility, hyperextensibility of interpharyngeal joint, deformity of middle finger, fixed position of forearm and thoracolumbar scoliosis. Neurological examination revealed microcephaly, mentally retarded child with selfmutilation, stereotype movements, intact vision (as she was able to recognize parents), but poor hearing with no speech. She had stimulus-induced exaggerated startles, generalized hypotonia with wasting, brisk reflexes bilaterally with equivocal extensor planter response and no clonus. No organomegaly was observed. 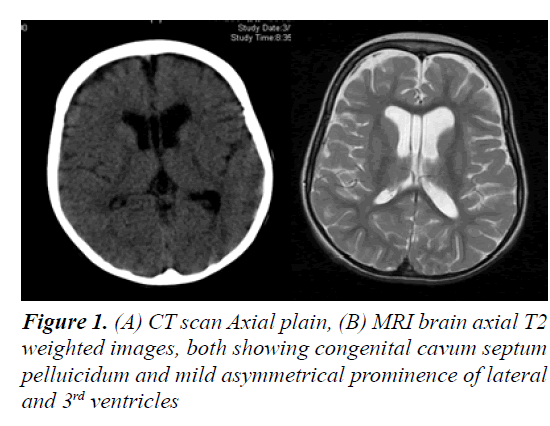 Laboratory tests revealed normal results for basic blood test, renal, liver, bone profiles, metabolic screening as well as thyroid function test. Routine karyotype revealed 46 XX normal female and High Resolution karyotype revealed no deletion or duplication. ECG and Holter monitor revealed premature atrial complexes. Echocardiogram showed mild tricuspid regurgitation with pulmonary gradient of 19 mm Hg, good function and contractility. Ultrasound of abdomen was normal. Electroencephalography revealed epileptiform encephalopathy as there was generalized background slowing, 4-6 Hz wave activity, frequent multifocal discharges and generalized discharges not associated with clinical manifestations. A trial of Topiramate and levetiracetam failed to control her seizures, but after initiation of lamotrigine therapy and escalation to 75 mg q12 hourly, there were no clinical seizures and repeated electroencephalogram showed generalized cortical slowing with no epileptiform activity. BAEP, ERG and FVEP were all normal. Skeletal survey revealed thick calvarium, short stubby hands with tapering fingers and thoracolumbar kyphoscoliosis with no abnormality in architecture of vertebrae or joint dislocations. Bone age was delayed. Retinal abnormality was detected during ophthalmological evaluation. Brain CT scan showed mild prominence of the ventricular system, thickening of the skull vault and scalloping of the inner table. Brain MRI initially showed mild brain atrophy with congenital cavum septum pelluicidum, but that repeated at 3 years of age showed prominent ventricular asymmetry with no cortical or white matter abnormality. At 6 years of age, motor NCS was normal while EMG showed mild changes suggestive of myopathy and muscle biopsy showed non-specific findings. After obtaining a written informed consent from both parents, genetic analysis was carried out. Genomic DNA was extracted from peripheral leukocytes from the girl and both parents. Genetic testing by whole exome sequencing of the RSK2 gene did not reveal a mutation. During her six-year follow-up period, most of well-known metabolic, neurodegenerative, and genetic disorders were ruled out, and she remained with mental retardation, no speech, recognized parents and siblings, was hypotonic and wheel-chair bound. Finally, she was given a diagnosis of Coffin-Lowry syndrome based on her dysmophic features and skeletal abnormalities. 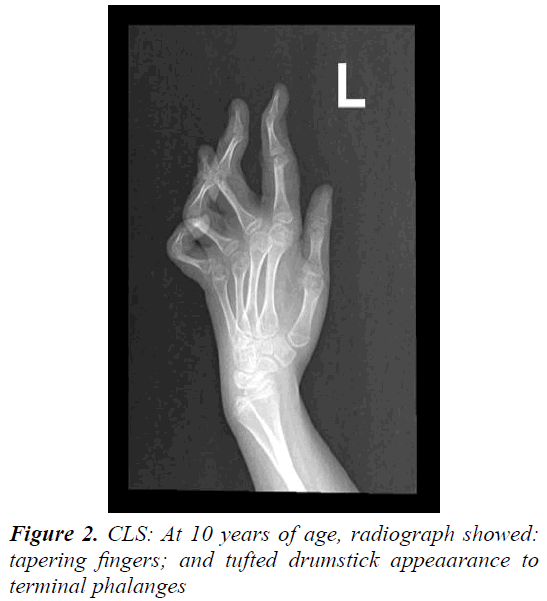 Female carriers described in previous studies show variable involvement, which can range from mild manifestations in the majority like fleshy hands with tapering fingers, short stature, mild facial dysmorphism and learning disability, to quite marked facial dysmorphism with moderate retardation in the minority. Obesity and psychiatric illness (depression, psychotic behavior and schizophrenia) have been described in few female carriers. Epilepsy may occasionally develop although some obligate carriers are completely normal [7,11].

The patient in this report had clinical and radiologic features consistent with the diagnosis of CLS: mental retardation, facial dysmorphism, short, thick tapering fingers, joint hyperextensibility, radiological skeletal changes (thick calvarium, thoracolumbar scoliosis with vertebra defects), hypotonia and seizures. The molecular analysis of all 22 RSK2 exons by sequencing did not reveal any mutation. This finding was consistent with previously reported data of detected mutations in up to 50% of cases by sequencing method [7]. Almost 70-80 percent of CLS patients are sporadic, with no family history, while 20- 30 percent of CLS patients have more than one affected family member. In CLS no consistent relationship has been observed between specific mutations and disease severity (genotype–phenotype correlation).

Multiplex ligation probe-dependent amplification (MLPA) for detection of any deletions and/or duplications of the RSK2 gene and androgen receptor gene methylation analysis looking for X chromosome inactivation pattern in the patient and mother DNA was also not feasible [9]. Her clinical symptoms could be explained by the high degree of inactivation of the normal allele, as reported in some X-linked disorders [8]. Skewed X-inactivation pattern can be observed in peripheral blood cells as well as in the brain or other tissues. Previous reports showed either no skewing of X-inactivation in female CLS carriers or skewed X-inactivation in female carriers (skewing mean 88:12) but without a significant correlation with cognitive impairment [7,15]. One study did, however, reveal high skewing (skewing mean 86:14) towards inactivation of the normal RSK2 allele in CLS females with full phenotypic expression [16,17].

Neurologically, cognitive deficiencies are variable in severity. However, in the vast majority of patients, IQ scores are between 15 and 60 and behavioral problems have been reported in few male patients [5,11]. Speech is always impaired, while the communication skills are good except in those with hearing impairment. Motor development is characterized by early generalized hypotonia and difficulties in ambulating and a clumsy gait later on. Epileptic seizures affect approximately 5% of individuals like in our patient with different semiology (focal, focal with secondary generalization and myoclonic) and variable responses to antiepileptic drugs [11]. Profound sensorineural hearing loss has been reported in 30% of affected male patients. Movement disorders are described in 20% of CLS patients and have been termed drop episodes or Stimulus-Induced Drop Episodes (SIDEs) which is characterized by sudden loss of muscle tone and falls, inconsistently provoked by unexpected auditory stimuli, occurs between mid-childhood to teens and may respond to a combination of clonazepam and valproate [18]. Spasticity may appear with advancing age as a consequence of cervical or lumbar spinal stenosis. Cranial CT and MRI are often normal although thickened calvarium,hydrocephalus, callosal dysgenesis, abnormal gyrification and leukoencephalopathy with prominent perivascular spaces have been reported [19-22].

Prognosis for cognitive outcome has been linked to reduced total brain volume, particularly cerebellum and hippocampus [23]. Premature death secondary to cardiac, respiratory, neurological and kyphoscoliosis causes occurred in 13.5% of males and in 4.5% of females at a mean age of 20.5 (range 13–34) years.

In conclusion, Coffin-Lowry syndrome is a rare X-linked semi-dominant mental retardation syndrome. Typical features are noted usually in affected hemizygous males while females are usually carriers with a less severe picture. Females with full manifestations are rare. Some obligate carriers are normal. Early recognition of the typical features will help in saving the cost of unnecessary, expensive and invasive investigations and allow for early detection of complications, most importantly cardiac, respiratory, auditory, neurological and mental, as well as for genetic counselling.

This work was supported by the College of Medicine, Research Center, Deanship of Scientific Research, King Saud University.