A disintegrin and metalloprotenase with thrombospondin type 1 repeats 13 (ADAMTS13) in children with end stage renal disease on regular haemodialysis.

Background: In chronic kidney disease (CKD), systemic inflammation may contribute to the endothelial dysfunction and accelerated thrombosis. Vascular access thromboembolism is the commonest cardio-vascular complication of children with End Stage Renal Diseae (ESRD). Recently A disintegrin and metalloprotease with thrombospondin type 1 repeats 13 (ADAMTS13) is suspected to be involved as a specific von Willebrand Factor (vWF) Cleaving Protease. Objectives: To evaluate serum ADAMTS13 level in children with ESRD on regular Haemodialysis (HD) and its correlation to thrombotic episode in HD patients. Subjects and methods: The present study was carried out on 40 children with ESRD on regular hemodialysis in Pediatric department of Tanta University hospital and 40 healthy age and sex matched children were serving as controls. All patients and controls were subjected to thorough history taking, especially history concerning vascular access thrombosis and clinical examination including anthropometric measurements, Routine laboratory assessment measuring complete blood picture (CBC) blood urea, serum Creatinin, PTH, PT, PTT, bleeding time, clotting time, blood electrolytes and urine analysis. Laboratory investigations include also ADAMTS 13 Level In this study. Results: There was a positive history of thrombi formation in patients more than controls especially in the vascular access and there was significant decrease in ADAMTS13 level in patients when compared to controls. Conclusions: Diminished serum ADAMTS13 level is an early biomarker for hypercoagulability and thrombotic tendency. Children with ESRD under regular HD have lower levels of serum ADAMTS 13 than controls which increase the risk for thrombosis.

Vascular access thrombosis constitutes about 20% of all hospitalization in dialyzed patients [1]. Hemodialyis (HD) process is associated with increasing thrombotic tendency due to platelets and clotting factors activation, in addition to fibromuscular and intimal hyperplasia, which may result in reduction in vascular access blood flow which causes blood stasis and favors hypercoagulability [2]. Von Willbrand Factor (vWF) is a wellknown index of endothelial damage and has been reported to increase in inflammatory conditions e.g. Chronic Kidney Disease (CKD) [3]. vWF is directly contributes to thrombus formation by mediating platelet adhesion to subendothelial collagen and indirectly, by being the carrier of FVIII and by preventing its plasma clearance [4]. A Disintegrin And Metalloprotenase with ThromboSpondin type 1 repeats 13 (ADAMTS13) works by cleaving the Tyr 1605- Met 1606 bond in the central domain of the vWF subunit and by regulating the adherence of platelets to the collagen embeded in subendothelial tissue. Diminished serum ADAMTS13 levels may be considered a marker for thrombotic tendency [5]. Recently, ADAMTS13 mRNA was detected in kidney, including glomerular endothelial cells, podocytes, glomerular basement membrane, and tubular epithelial cells [6]. ADAMTS13 deficiency and or the presence of antibodies against this enzyme may increase ultra large (UL) vWF plasma levels, favoring the occurrence of thrombosis in small vessel [7]. Several studies have indicated that the ratio of vWF to ADAMTS13 may be beneficial in the diagnosis and treatment of patients in a prothrombotic state. Low activity of vWF-Cleaving Protease (vWF-CP) [8], contributes to the development of thrombotic thrombocytopenic purpura (TTP) [9].

The aim of the work was to evaluate serum ADAMTS13 levels in children with ESRD on regular HD and its relation with dialysis duration and thrombotic episode as an early predictor of hypercoagulability status in pediatric HD patients.

Design of the study and setting

The present cross-sectional study was conducted after approval from the research ethical committee of the Faculty of Medicine, Tanta University and informed parental consents on 40 children with ESRD on regular haemodialysis attending Pediatric Nephrology and Dialysis Unit from June 2016 to June 2017. Their ages ranged from 3 to 17 years. They were 14 males and 26 females. 40 healthy children with matched age and sex were serving as control group.

Exclusion criteria: Children with ESRD on conservative treatment or on peritoneal dialysis or post transplantation.

All patients and controls were subjected to the following

History taking: Including duration of dialysis and thrombotic episodes.

‘Data were collected and analyzed using Statistical Package for Social Sciences (SPSS) for windows’ (version 12). All Data were expressed in terms of mean ± SD. Comparisons among groups were made using paired t test. ‘Two-group comparisons were performed non-parametrically using Mann-Whitney U test’. ‘All statistical tests were two tailed and P<0.05 was considered statistically significant’.

Clinical and laboratory data of studied patients and controls are presented in Tables 1 and 2.There was no significant difference in age, sex, weight or height between patients and Control group (Table 1). 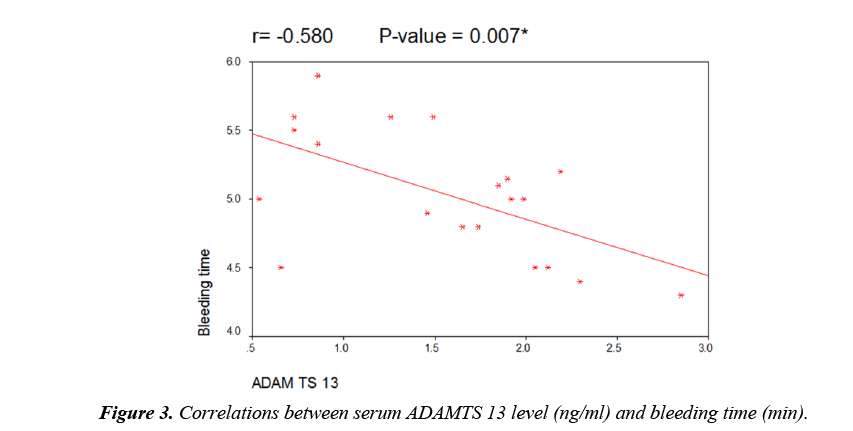 Table 4. Correlations between serum level of ADAMTS 13 and demographic and laboratory data of studied patients.

In our study, Our patients have a characteristic anemia. This is in agreement with Fadrowki et al. who stated that the anemia of CKD is due to reduced renal erythropoietin production and shortened red cell survival [12]. In contrary to our results, Gibertson DT et al. reported that among chronic dialysis patients, hemoglobin levels have markedly increased due to Widespread use of erythropoiesis-stimulating agents and intravenous iron over past 15 years [13].

In our study, there is a significant decrease in total leucocytic count (TLC) of patients when compared to controls. This is in agreement with Greer JP, who stated that in patients with chronic renal failure undergoing dialysis, exposure of patient blood to artificial membranes of the dialyser may result in the classic complement activation pathway typically producing complements (C3a or C5a) which induce neutrophil aggregation and adherence to endothelial surface with resultant fall in total leukocyte count [14]. In the contrary, Arogundade FA reported that total WBC count are within normal due to the fact that uraemia affects the function of leukocytes rather than granulopoiesis and this is the reason why there is poor leukocytes response to infection in CKD patients [15].

In our study, there is a significant decrease in platelets count of patients when compared to controls. This may explain the relation between ADAMTS13 deficiency and low platelets count. Since this enzyme is required for cleavage and clearance of ultralarge vWF (ULvWF) from circulation, its reduction contribute to higher vWF levels and lower platelet count in HD patients which probably contributes to the hypercoagulable state seen in these patients. ADAMTS13 deficiency plays a vital role in causing thrombosis and consumption of platelets in the process of thrombosis. Platelets production may also be affected by ureamic toxins, its production may depends on erythropioetin which be deficiently secreted by the kidney or heparin induced thrombocytopenia may be the cause. This is in agreement with Abdu A [16]. But our result is not in agreement with Akinsola A who reported that in CKD the platelets functions are affected leading to platelets dysfunction due to ureamic toxins without affection on platelets count [17].

In our study, serum creatinine, blood urea and BUN are increased in patients than control group. This is in agreement with, Wong [18].

In our study, there is a significant decrease in patients GFR when compared to control group. This is in agreement with Furth SL, [19] and K/DOQI, [20].

In our study, there was no difference in PT and PTT of patients when compared to control group. This in agreement with Zahit B, [21] but this is not in agreement with Mohamed Ali MS who showed prolongation of PTT and PT in HD patients. This controversy of results is explained by the difference in the doses of used heparin during HD sessions, the variability of number of HD sessions or inclusion of patients with renal transplant and peritoneal dialysis in their studies. While our study included only haemodialysis patients with no prior renal transplant [22].

In our study, there is significant increase in bleeding time and coagulation time when compared to control group. This is in agreement with Soland JA. This is due to platelets abnormality [23].

In our study, there was a highly significant decrease in Na level in patients as compared to controls. This is in agreement with Graziani which explained that by excessive free water intake or reduced solute intake which leads to lower predialysis serum sodium concentrations [24].

In our study, there was a highly significant increase in K+ level in patients as compared to controls. This is in agreement with Kaskel F who reported that persistent hyperkalemia in dialysis patients is likely to be caused by disorders of external potassium balance: excessive potassium intake, inadequate potassium elimination, or a combination of the two [25].

In the present study vascular access thrombosis (VAT) detected in 13 (65%) patients. This is in agreement with, Anstadt MP, who reported that many mechanisms explain thrombo embolism in HD patients, endothelial injury, which probably resulting from uremia, hypertension, hyperparathyroidism, increases vWF levels, chronic activation of platelet and endothelial cells besides, inflammatory cytokines which promote ULvWF release from endothelial cells to plasma [28].

In our study, patients have statistically significant lower levels of serum ADAMTS 13 when compared to healthy controls. This may explain the role of kidneys in ADAMTS13 synthesis, in its metabolism or its release into plasma by injured endothelial cells especially in patients with chronic kidney disease. This result is in agreement with many previously published papers e.g., Taniguchi S et al. [26] and Ocak G et al. [29]

But this results differ from other published papers e.g. Scheiflinger F [30] and Bernardo A et al. [31] as they stated that the marked elevation in plasma level of vWF leads to increased ADAMTS 13 synthesis as a compensatory mechanism. This compensatory elevation in ADAMTS13 Ag level to increase ADAMTS13 activity which may be responsible for keeping VWF/ADAMTS13 Ag and VWF/ADAMTS13 activity ratios unchanged.

Regarding vascular access thrombosis (VAT) in our study, 13 patients (65%) of patients have VAT. It is observed in our study that serum ADAMTS 13 levels are significantly lower in patients with thrombotic episodes when compared to those without thrombotic episodes. So serum ADAMTS 13 levels can be used as a biomarker of hypercoagulability state in children with ESRD under regular hemodialysis. This result is in accordance with Taniguchi S et al. [26] and Ocak G et al. [29] who reported similar results.

Our study showed no difference in ADAMTS 13 level between males and females and in different types of vascular access permenant cathter or arteriovenous (AV) fistula.

In our study, there was no significant correlation between ADAMTS 13 and duration of dialysis of studied patients in spite of previously published relation between dialysis duration and serum ADAMTS13 level which may indicates the role of uremic state in the pathogenesis of decreased level of ADAMTS 13 [32].

Hemodialysis process, as well as ESRD, constitutes acquired risk factors for thrombosis due to platelets and clotting factors activation. Children with ESRD under regular HD have lower levels of serum ADAMTS 13 than controls which increase the risk for thrombosis so reduced serum ADAMTS13 levels may be considered a marker for thrombotic tendency especially in the vascular access. Coagulation control in haemodialysis patients is important especially in vascular access for prevention of VAT which constitutes one important cause of hospitalizations in HD children.

We recommend regular follow-up of children with ESRD and early evaluation of ADAMTS 13 levels as an early biomarker of hypercoagulability to build strategies to control these risk factors of thrombosis in dialysis children especially vascular access thrombosis. It is possible to re-engineer ADAMTS13 protease to improve specific activity, which may offer therapeutic benefits to patient’s children with ESRD. This cross-sectional study is essential to guide further longitudinal studies that explore further data about thromboembolic complications of children with ESRD under regular HD.