A comparison of spot urine protein-creatinine ratio with 24 hour urine protein excretion for prediction of proteinuria in preeclampsia.

Objective: To examine the correlation between spot urine PCR and 24-hour urine protein excretion in patients being evaluated for preeclampsia. Population or sample: 98 pregnant women with suspected preeclampsia and a gestational age more than 20 weeks.

Conclusion: There is strong correlation between spot PCR and 24-hour urine protein collection. PCR could be a reasonable alternative to clinicians in order to reduce their dependence on the 24-hour urine collection.

Preeclampsia and eclampsia is the third leading cause of maternal mortality worldwide and is a leading cause of perinatal mortality and morbidity. The World Health Organisation (WHO) estimates around 600,000 women will die each year from preeclampsia [1]. Preeclampsia complicates 2-8% of all pregnancies [2]; it is a multisystem endothelial disease that leads to increased permeability of glomerular basement membrane to protein with resulting proteinuria. Preeclampsia is diagnosed with elevated blood pressure (systolic ≥ 140 and diastolic ≥ 90) and proteinuria (>300 mg/24 hour) after the 20th week of gestation in a previously normotensive non-proteinuric patient [3].

The measurement of protein excretion over a 24-hour urine period has been considered the gold standard for quantitative evaluation of proteinuria in pregnancy [3]. However the collection itself is time consuming leading to delays in the diagnosis or even missed diagnoses. Furthermore it is inconvenient for women, as well as clinical staff, has cost implications and is subject to errors such as incomplete collection. There is a need for a quick, reliable, acceptable and cost effective alternative test.

The spot protein creatinine ratio (PCR) has been proposed as an alternative test for the diagnosis of preeclampsia [4,5]. A good correlation between PCR and 24 hour protein excretion has been demonstrated in non-pregnant patient population with other renal disorders such as renal transplant, lupus and diabetic nephropathy [6-9]. A similar positive correlation between the two tests has been demonstrated in pregnant women by many studies, the International Society for the Study of hypertension-13544.html'>Hypertension in Pregnancy has accepted this test to identify significant proteinuria [10]. However PCR has not been used widely in clinical practice, as there is no consensus on the most appropriate threshold [11], and some studies reported conflicting results [12,13]. PCR would be a very useful test as it is quick, cheap and convenient to patients and staff.

The aim of our study was to examine the correlation between spot urine PCR and 24-hour urine protein excretion in patients being evaluated for preeclampsia, and its value in predicting significant proteinuria in preeclamptic patients.

A prospective cohort study was performed on pregnant women with suspected preeclampsia and a gestational age more than 20 weeks, we included women with risk factors for preeclampsia on the bases of clinical findings that include one or more of the following: hypertension, oedema and new-onset proteinuria on urinary dipstick. Women with known renal disease, chronic hypertension or urinary tract infection were excluded. The study was conducted in a tertiary maternity centre with more than 9000 deliveries per year, (the Coombe Women and Infants University Hospital) between September 2008 and October 2009, and the study was approved by the hospital’s ethical committee.

The 24-hour collection was performed as an inpatient if it was clinically indicated; otherwise it was performed as outpatient. A random urine sample was collected either before or after the 24- hour urine collection, the concentration of total protein in urine was measured by Beckman Coulter urinary/CSF protein reagent (OSR 6170) photometric colour test with pyrogallol red and molybdate (Beckman Coulter AU640 Chemistry analyser), and the urine creatinine level was measured by Beckman Coulter Creatinine (OSR 6178), kinetic colour test (Jaffe method)-picric acid in alkaline medium (Beckman Coulter AU640 Chemistry analyser). The ratio was calculated by dividing the urinary protein concentration by the urinary creatinine concentration, and the correlation with the 24-hour urine protein excretion was assessed. The ratio expressed as g/mmol. Sensitivity, specificity, and predictive values of the random urine PCR at various cut-offs for prediction of significant proteinuria was estimated considering the 24-hour urinary protein excretion as the gold standard.

A receiver operating characteristic (ROC) curve was plotted, and the area under the curve was calculated, the value approaching one representing a perfect test. Spearman’s rho test was used to evaluate the correlation between the random urine PCR and 24-h urine protein excretion and a P Value less than 0.05 was considered significant. Statistical analysis was performed by SPSS software (statistical package for social sciences, version 21).

Table 1. Demographic and clinical characteristics of patients by presence or absence of significant proteinuria in a 24-h urine collection (n=96). 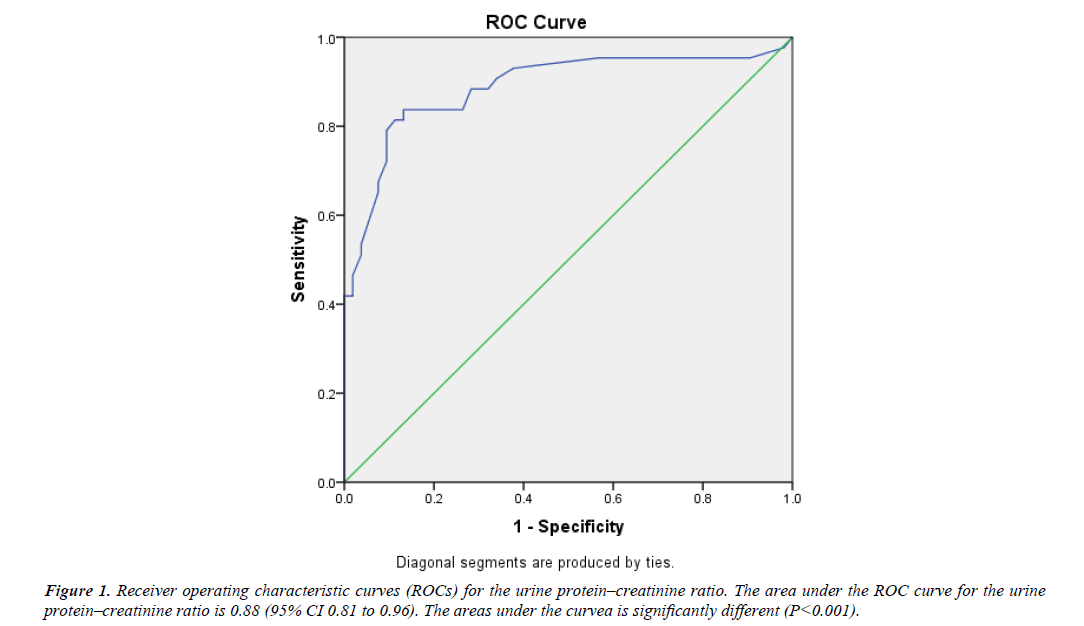 The finding of significant proteinuria is an essential component in the diagnosis of preeclampsia with its risk of maternal and perinatal morbidity and mortality. Early diagnosis and treatment of preeclampsia is essential for prevention of eclampsia. On the other hand accurate diagnosis is important to prevent unnecessary interventions in hypertensive pregnant women, whether further testing or treatment.

Although 24 hour urine collection for total protein estimation, as either outpatient or an inpatient, is still used as the gold standard test, it has many limitations: there is an inherent time delay and it is inconvenient for both patients and staff. In addition errors are possible such as incomplete collection [14] which may result in missed diagnoses. PCR can be a practical alternative test which would minimise such errors and facilitate prompt clinical decision making [13]. It is also a test that can rapidly be repeated in an evolving clinical situation. This would also impact healthcare costs such a staff time and in-patient costs and reduce patient anxiety while awaiting the results [15]. However, although the PCR ratio shows promising diagnostic value, a balance is required between sensitivity and specificity that is based on a chosen threshold, a well as the role of the test as an add-on, screening or replacement test. Ultimately it’s about accuracy in the diagnosis of preeclampsia and therefore we believe this is an important issue.

The use of the PCR to replace the 24 hour urinary protein measurement would ideally use a cut-off level that maximises sensitivity and specificity to limit the number of false negative results and thus prevent undetected preeclampsia with its risk of serious morbidity and mortality for mother and baby. It is also desirable to limit the number of false positive results in women who would then be subjected to increased monitoring and possibly pre-term delivery. If PCR were to be used as a screening test, with positive results requiring a 24 hour urine collection to verify significant proteinuria, then false negative rates need to be minimised. This would allow false positive results to be identified by the second test and thus sensitivity can be maximised at the expense of specificity.

In our study a PCR of 0.02 g/mmol was identified as the optimal threshold to detect urine protein excretion of 300 mg/24 hour, with sensitivity and a specificity of 97.6% and 44% respectively. There are some reports with conflicting results; variable laboratory methods used for measuring protein and creatinine, different cut-offs and different units were used for the PCR thereby valid comparison between these studies is difficult [16- 18]. Young et al. found no single value to distinguish significant proteinuria after ROC analysis but found a value of less 0.15 g/g efficiently ruled out pregnancy induced hypertension [19]. Rodriguez-Thompson and Lieberman performed ROC analysis and the area under the curve was (0.91), but was unable to identify clear cut-off vale for PCR but elected the use of 0.19 g/g [20]. In a study done by Durnwald and Mercer, although a significant relationship was identified between 24 hour urine collection and PCR (p<0.0001), the correlation coefficient was low (r2=0.41), ROC analysis was performed and the area under the curve was 0.8. Various cut off values for PCR were used with ranges between (0.15-0.5 g/g) while sensitivity and specificity ranged between (63.1%-92.9%) and (32.7%-82.7%) respectively, but the optimal cut off value to maximize sensitivity and specificity was 0.39 which had a 72.6% sensitivity and 73.1% specificity [13]. Kayatas find the PCR poor predictor for 24 hour proteinuria with cut off value of 0.28 g/g, the sensitivity and specificity were 60.4% and 77.9%, respectively. However, he found PCR at cut off value of 0.77 g/g a good predictor of proteinuria more than 2 gm/day [21].

A study done by Shahbazian et al. identified PCR of 0.20 g/g as the best threshold to detect urine protein excretion of 300 mg/24h, with sensitivity and a specificity of 91.2% and 87.8% respectively [22]. Wheeler and colleagues found strong correlation (r=0.88) between the PCR and 24 h urine protein results, the optimal PCR based on ROC analysis was 0.21 g/g with sensitivity and specificity of 86.8% and 87.5% respectively [18]. A study by Lamontagne showed a variation in PCR result during the day, in their study PCR was less sensitive in first morning samples [23]. However, Verdonk compare the PCR result in three urine sample collected at 8 am 12am and 5 pm and he found no difference between the three measurement times regarding the sensitivities and specificities [24].

The main concern in clinical practice for this test is the false negative results. In our study we maximized the sensitivity at the expense of specificity, to reduce the possibility of missing the diagnosis of preeclapsia, as a false positive PCR would not lead necessarily to interventions in the absence of other findings.

Most studies have showed strong correlation between spot PCR and 24-hour urine protein collection; however no consensus for specific PCR cut off value has been obtained. We believe that this test could be a reasonable alternative to clinicians in order to reduce their dependence on the 24-hour urine collection and suggest a cut-off of 0.02 g/mmol in the interests of patient safety. The advantages of PCR is not just it is a faster and more convenient test; it is the fact that all pregnant women with hypertension could be easily screened throughout pregnancy and up to delivery time.

Future study need to be focused on the evaluation of clinical outcomes and the cost-effectiveness of the use of random urinary PCR for prediction of significant proteinuria.