Objective: Arterial fibrillation is the most common type of arrhythmia observed after coronary arteries bypass operation and culminates in hemodynamic instability, higher morbidity and mortality rate, longer period of hospitalization, and higher hospital expenditures. The present research seeks to compare the effect of metoral, magnesium prophylactic, and a mixture of both (magnesium and metoral) in reducing the occurrence of CABG (coronary arteries bypass graft).

Methods: This is a double blind clinical trial where 195 patients candidated for CABG were selected based upon exclusion and inclusion criteria and randomly divided into three groups of metoral (receiving 5 mg metoral), magnesium (receiving 1.5 g magnesium), and combined (2.5 mg metoral+1 g magnesium). The resulting information was then analyzed using SPSS v.19 and ANOVA statistical tests.

Conclusion: Both metoral and magnesium are really useful in reducing post-operation AF among the patients with CABG, while metoral was more effective than magnesium. On the other hand, adding magnesium to metoral can clearly enhance its prophylactic effects.

Arterial Fibrillation (AF) is considered to be one of the most common complaints following coronary operations [1-4]. The occurrence rate of AF is different depending upon the type of operation, (e.g. 20 to 40% following CABG with an average of 30%). The etiology of AF is not clearly specified, but there are three main factors that play a major role in its occurrence: 1) Ischemic atrial tissue; 2) Increased sympathetic activity; 3) Increased inflammatory responses [2].

There is a direct correlation between post-operation AF and hemodynamic instability. Various researches have pointed to the fact that post-operation AF increases hemodynamic instability, Thrombolytic incidents, and result in longer period of hospitalization and higher hospital expenditures [1]. Various pharmacological methods have been proposed to prevent post-operation AF [1-4]. Prescription of beta-blockers before and after operation is used as the first line of treatment for POAF prophylaxis. Sotalol and Amiodarone are used as proper substitutionary treatments among high-risk patients. On the other hand, magnesium supplements also need to be taken into consideration among patients with hypomagnesemia. As a result of rise in sympathetic tone following CABG, AF risk increases among patients. By influencing catecholamines that affect myocardia, beta-blockers reduce the risk of AF [1,5-7]. Various researches have recently pointed to metoprolol as the most commonly used material [1,8,9]. Metoral is a class 2 beta-blocker. It is usually used to treat hypertension, chest cage pains, migraine headaches, anxiety, tachycardia, and to control arterial rhythm [9-11]. Further to reducing AF, metoral also reduces ventricle rate [6,10,12]. Hypomagnesaemia also acts as a risk factor in order to create supraventricular tachycardia and ventricular tachycardia and it is an independent factor in the progress of POAF [1,12]. Mg is the second intracellular cation whose reduction may make the patient prone to SVT, VT, AF, long term PR, QT-segment, and even VF [12-14]. Mg prophylaxis is safe for the patients, but we do not know if it is useful for preventing AF [13,15]. The advantages of using magnesium include cheap price, the length of AF and VT, cardiac index stabilization, and infraction size reduction [15-17]. In spite of all these advantages, proving the routine utilization of Mg following CABG is a quite challenging task [15]. The present research seeks to compare the effect of metoral and magnesium and a mixture of both in the form of prophylaxis on POAF.

This is a double blind, randomized, clinical trial conducted on 195 patients candidated for CABG resorting to Amir Almomenin Hospital (PBUH) of Arak. Having possessed the inclusion criteria, the participants signed the written consent form. The patients were randomly divided into metoral, magnesium, and metoral and magnesium groups. After entering, the operation room and receiving premedication on the day of operation (25 mg of promethazine and 3 to 5 mg of morphine), the patients entered the operation room. Then, the necessary monitoring including T, Paco 2, EKG, RR, PR, and SPO 2 were carried out. Following a brief sedation (1 mg of midazolam and 1 cc of fentanyl), arterline was taken from nondominant left ulnar artery. The patients were then inducted and intubated using 5 to 7 mg fentanyl, 5 mg midazolam, 50 mg Atracurium, and 60 to 100 mg lidocaine. The patients then underwent ventilator. Following intubation, 5 mg metoral was used for the first group, while the second and the third groups received 1.5 g magnesium and 2.5 mg mixture of metoral and magnesium, respectively. The drugs were put in syringes and given to an assisting resident of anesthesia who was totally unaware of their contents. These drugs were finally put on syringe pump. Then, CV-line was installed for the patients and the operation began. Having placed the patients on cardiopulmonary pump and after conducting grafts, CBP pump was removed and the intubated patient was relegated to ICU. All signals of the patients were controlled in ICU and in the case of any signs of AF, amiodarone (300 mg) and, then, infusion dose were used to treat them. Finally, the information obtained by completing patients’ questionnaire by the interns was analyzed and the frequency rates of AF across all three groups were compared against one another. Patients’ V/S after entering ICU and their length of stay there were compared against one another. The resulting information was finally analyzed using ANOVA and χ2 and presented in tables and statistical figure.

1) All non-emergency patients candidated for CABG resorting to Amir Almomenin Hospital of Arak who agreed to take part in the research. 2) All type 3 and 4 ASA patients. 3) All patients whose length of operation was shorter than 6 h. 4) All patients without a history of previous arrhythmia and AF prior to CABG. 5) Patients without any history of using antiarrhythmic agent prior to CABG.

According to the following formula, as many as 65 patients were put in each group.

Table 1 presents a comparison of the age and number of grafts of patients candidated for coronary artery bypass graft resorting to Amir Almomenin Hospital of Arak in metoral, magnesium and metoral & magnesium groups.

Table 1: Comparing the age and number of grafts in patients.

No significant difference was observed between the three groups in terms of their length of staying in ICU and the length of hospitalization (P ≥ 0.05). 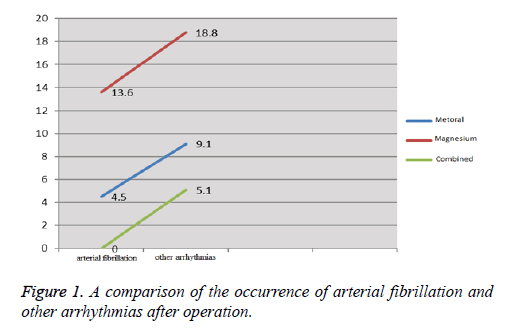 Figure 1: A comparison of the occurrence of arterial fibrillation and other arrhythmias after operation.

Achieving a useful combination as prophylaxis to prevent post-operation AF of the patients candidated for CABG is a major step taken towards reducing the costs, death toll and post-operation side effects. As the results of our research indicate, the occurrence of AF following CABG is more in Mg group compared to the other two groups of participants. These results point to the fact that metoral is an effective beta-blocker in preventing post-operation AF among CABG patients. This effect will be enhanced by adding magnesium as an additive. There is a direct link between post-operation AF and hemodynamic instability. AF increases mortality, length of hospitalization, length of staying in ICU, and hospital costs [1,2]. Utilizing beta-blockers or amiodarone is one of the most effective pre-emptive measures [1-3]. On the other hand, existence of hypomagnesemia is also an important factor that increases the possibility of AF after CABG. As a result, utilizing prophylactic magnesium may result in the significant reduction of AF after operation [1,2]. The results of previous studies are somehow similar to those achieved in our research. A research conducted by University of Tehran introduced using beta-blockers as the most effective prophylactic method to reduce post-operation AF [1]. This research, conducted by Haghjoo et al. introduced Sotalol and amiodarone as prophylactic agents [1]. These results are in line with those achieved in our research where we discussed the prophylactic effect of metoral.

A research by Gu et al. in Guangixi university of China reported that magnesium had a prophylactic effect in reducing post-operation AF. Clear results indicated a 36% reduction of POAF using prophylactic magnesium which is in line with our research, but the effect of magnesium in reducing POAF was less than the above said research [14]. In a systematic review by Shepherd et al. in Southampton University of the UK, the prophylactic effect of magnesium and Sotalol in reducing POAF was investigated and both medicines were found to have a major effect in reducing POAF compared to placebo, while Sotalol played a stronger role compared to magnesium [16]. The effectiveness of metoral and the combined group in our research was more than magnesium. A research by Kamali et al. in Medical Sciences University of Arak arrived at the conclusion that metoral had a greater influence in reducing POAF compared to Amiodarone (P-value=0.004) which is in line with the current research [19]. In the present research, metoral played a major role in shortening the period of patients’ stay in ICU, but our research found no significant difference between the two groups in terms of this issue. A review of all these researches confirms the great effect of magnesium and beta-blockers in reducing POAF. It is suggested to used beta-blockers such as metoral as very useful factors to reduce POAF. As magnesium is cheap and considering its prophylactic influence in reducing POAF, this medical supplement can be used in the absence of betablockers. Our research would also like to recommend using magnesium along with metoral as the reinforcing factor which enhances the anti-arrhythmical effects of metoral. Furthermore, recently various studies using computerised tomography scan have reported on pattern of differential diagnosis and play a major role on diseases [20-26].

Both metoral and Mg are really useful in reducing postoperation AF among patients with CABG with metoral being more useful than magnesium. Adding metoral to magnesium can clearly increase its usefulness. Finally, interested researchers are recommended to compare the effect of metoral and magnesium with metoral and other reinforcing factors such as statins and saturated fatty acids.

The authors report no conflicts of interest related to this study.