Inflammatory burden is high in End Stage Renal Disease (ESRD) patients. In Diabetic ESRD patients, the balance between pro- and anti-oxidant activities is shifted towards an oxidative stress. Myeloperoxidase (MPO), a bactericidal enzyme plays an active role in induction and evolution of the endothelial dysfunction associated with Type 2 Diabetes Mellitus (DM). However, whether MPO can serve as a marker in diabetic ESRD patients is doubtful. Hence, the present study was undertaken. The Fasting Blood Glucose (FBG), Serum Creatinine, Blood Urea Nitrogen (BUN) and Serum Myeloperoxidase levels were estimated in three different groups with 30 subjects each. The Control group includes healthy individuals, group I constitutes Type 2 diabetes with no nephropathy and group II includes Type 2 diabetes with nephropathy patients. Glomerular Filtration Rate (GFR) was calculated using Cockcroft Gault formula corrected for the Body Surface Area. Statistical software, namely, SPSS 15.0, Stata 8.0, MedCalc 9.0.1 and Systat 11.0 were used for the analysis of the data and Microsoft word and Excel have been used to generate graphs, tables etc. Reference Ranges for MPO were established in our study. An increase in MPO levels was noticed in Group I, whereas a differential behaviour of MPO levels was noted in group II. Uremic diabetic nephropathy patients with a low MPO level may be at a lesser risk for any cardiac event compared to those uremic patients with high MPO levels. Hence, MPO may be taken as a biomarker to predict coronary events in diabetic ESRD.

“The quality of life is dependent upon the quality of the life of your cells. If the blood stream is filled with waste products, the resulting environment does not promote a strong, vibrant healthy cell life nor a biochemistry capable of creating a balanced emotional life for an individual”

Diabetes mellitus is characterized by elevated blood glucose levels, a continuous low–grade inflammation and endothelial activation state [2,3]. Type 2 DM is prevalent in our country to an extent of 5.9% [4]. MPO (E.C.No. 1.11.1.7), a hemoprotein traditionally viewed as bactericidal enzyme secreted by neutrophils plays an active role in the induction and evolution of endothelial dysfunction associated with Type 2 DM [3].

The inflammatory burden is high in ESRD patients. In diabetic ESRD patients, the balance between pro- and anti-oxidant capacities is shifted towards a state of oxidative stress [5]. As increased oxidative stress and inflammation are both common features of ESRD, it has been speculated that there may be an association between them and endothelial dysfunction, contributing to increased risk for cardiovascular disease [5]. As MPO predicts endothelial function in humans, probably by regulating nitric oxide bioavailability, increased MPO activity serves as a mechanistic link among the inflammation (activated leukocytes), oxidative stress and endothelial dysfunction in ESRD [6].

A cross sectional study was conducted for a period of one year, starting from Jan 2007, at the M.S.Ramaiah Medical College Teaching Hospital (MSRMTH), Bangalore. Informed Consent was taken from all the participants. The Ethical Clearance for this study was obtained from the Ethical Review Board of M.S.Ramaiah Medical Teaching Hospital. The subjects were selected by Simple Random Sampling.

2. Group I: Type 2 diabetes patients with no nephropathy, attending the OPD or admitted in the wards of MSRMTH.

3. Group II: Type 2 diabetes patients with nephropathy, attending the OPD or admitted in the MSRMTH.

Relevant clinical history was taken in OPD or in wards and the clinical examination was performed. The height and weight of the patient was recorded at the same time.

Patients with type 2 diabetes mellitus with uncontrolled hype rglyc emi a , a cut e corona ry syndrome s , cerebrovascular accidents or stroke and severe peripheral vascular artery diseases were excluded from group II whereas type 2 DM with nephropathy were excluded from the group I.

About 5 ml of blood sample was collected in the vacutainer bulb without any anti-coagulant. The blood sample was collected after 10 hours of fasting. It was centrifuged and the following investigations were performed immediately- fasting blood glucose, serum creatinine & blood urea nitrogen. They were measured on an auto-analyzer – Dade Behring Dimension series RXL Max. Blood glucose was estimated by an adaptation of the hexokinase – glucose 6-phosphate dehydrogenase method [7]. The remaining serum sample was stored between 0 – 4°C, to measure the MPO levels [8]. The creatinine and BUN were estimated by modification of kinetic Jaffe’s reaction reported by Larsen [9] and urease glutamate dehydrogenase coupled enzymatic technique according to Talke H and Schubert [10] respectively.

Serum MPO levels were estimated by a spectrophotometric method using O–Dianisidine Dihydrochloride as a substrate [11]. Myeloperoxidase was assayed as follows: 0.1 ml of the serum was mixed with 2.9 ml of 50 mM phosphate buffer, pH 6.0, and containing 0.167 mg/ml O-Dianisidine Dihydrochloride (HI-MEDIA Co.) and 1% Hydrogen peroxide (E–Merck) [11]. Some modifications were made to the original procedure to enhance sensitivity of the assay. The change in absorbance was measured at 470 nm using a spectrophotometer (ELICO SL 134 UV – VIS Double Beam Spectrophotometer) for a period of three minutes (kinetic assay) and MPO was measured using the formula [12]. One unit of MPO activity was defined as that degrading one μmole of peroxidase per minute at 25°C [13]. The Statistical software namely SPSS 15.0, Stata 8.0, MedCalc 9.0.1 and Systat 11.0 were used for the analysis of the data and Microsoft word and Excel have been used to generate graphs, tables etc [14-16].

Table 4: Sensitivity, specificity of MPO levels in diabetics with respect to controls.

Table 5: Comparison of study parameters in the two groups in diabetic nephropathy. 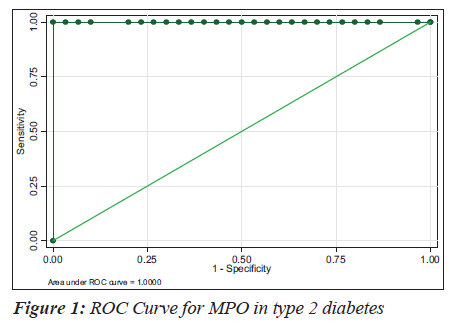 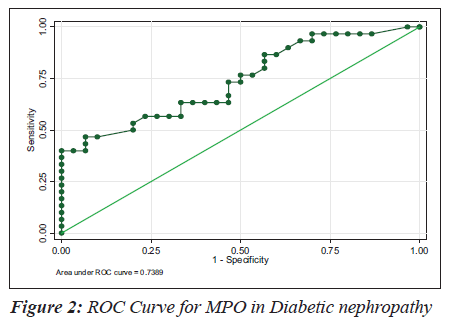 Group II cases are further divided into two groups based on the MPO levels:

1. Group X: Diabetic Nephropathy with an increase in Myeloperoxidase levels. (greater than or equal to 354 U/L)

2. Group Y: Diabetic Nephropathy with a decrease in Myeloperoxidase levels. (less than or equal to 354 U/L).

Table 6:Comparison of study parameters in the two groups in diabetic nephropathy.

Many patients in Chronic Renal Failure exist in a chronic inflammatory state. Patients affected by ESRD experience an excess morbidity and mortality due to cardiovascular disease [20]. Haemodialysis also serves as a potent stimulator of circulating phagocytes [21]. Hyperglycemia of diabetes mellitus and its attendant metabolic syndromes – insulin resistance, hypertension,obesity, dyslipidemia and some social characters of these patients e.g. smoking and the use of xenobiotics predispose to diabetic nephropathy. These accelerate free radical generation and attenuate the anti-oxidant defence system creating oxidative stress [22]. Hence diabetic nephropathy is a state of disease where in there is increased oxidative stress and an increase in MPO is expected which explains the elevation of MPO levels in group I and group IIb.

Table 6 shows the details of GFR and MPO levels in group X and group Y. In group Y (19 patients), the MPO levels are reduced (less than or equal to 354 U/L). These are diabetic nephropathy patients and hence classically a rise in serum MPO would be expected. Instead a decrease in MPO is seen which is due to a rise in the urea levels. The uremic plasma seriously interferes with a variety of normal functions. When urea is present in high concentrations in the body fluids, it may decompose spontaneously into ammonia and cyanate. Cyanate is a potential toxin which combines irreversibly with normal protein in cells and affects their function [23]. Cyanate inhibits both peroxidative and halogenating activities of MPO and inhibits the enzyme within intact neutrophils. The cyanate also inhibits Cl-/H2O2/MPO mediated bacterial killing [24]. In Group IIb, the fall in MPO noted with increased BUN levels was for the same reason.

In Group X (11 patients), the MPO was raised in all of them (greater than or equal to 354 U/L). In this group a few of them were on haemodialysis (four patients) whereas the rest of them were on conservative medical line of treatment (seven patients). Uremia represents a unique clinical condition in which immune dysregulation appears to be closely associated with phagocyte derived oxidative stress. The latter is dramatically exacerbated by haemodialysis (HD) treatment. This aggravation is commonly attributed to the recurrent activation of neutrophils during blood passage through the dialysis circuits and subsequent generation of activated complement components, following the contact with bio-incompatible membranes and/ or the retrodiffusion of endotoxins from the dialysate [25]. Some studies show that during hemodialysis treatment, even with use of bio-compatible membrane and ultra pure dialysate, it may contribute to an increase in leucocyte activation and enhanced oxidative stress [5,26,27].

In group X some patients who were on conservative line of treatment had an increase in BUN levels. We have already seen that MPO values decrease with an increase in BUN level. But in this group of patients, there was an increase in MPO with an increased BUN level. The raise in MPO in this group of patients may be due to the following reasons. In a study [25], which emphasized the respective role of uremic toxins and myeloperoxidase in uremic state, the workers have measured MPO by two different methods. One is an ELISA method and the other is the measurement of a colored product quinoneimine, which is formed due to the co-oxidation of phenol and aminoantipyrine (AAP). A discrepancy was noted between the MPO values measured by these two different methods. To understand the discrepancy in CKD plasma between low immunoreactive MPO levels detected by ELISA and high MPO enzymatic activity levels measured by quinoneimine formation, they investigated whether the oxidative coupling of phenol and AAP resulted mainly from MPO activity in the presence of hydrogen peroxide or whether other oxidative plasma components were directly involved in this oxidation. Hence comparative assays were performed. The plasma of predialysis patients is devoid of peroxidase and the oxidation level as measured by quinoneimine formation is constant irrespective of both H2O2 and MPO presence suggesting mediation by other oxidative plasma components [25]. The other oxidative plasma components are the free plasma aminothiols (homocysteine, cysteine, cysteinylglycine, glutathione). These plasma aminothiols have been found to be excessively oxidized in uremia. The plasma of the ESRD patients on hemodialysis has increased levels of these free plasma aminothiols before dialysis. Hemodialysis procedure serves to remove these and restore the redox status [28]. Hence the increase in MPO levels in patients on hemodialysis appears to be a true reflection of the MPO activity. In pre-dialysis patients, exogenous compounds, such as uremic toxins or active redox compounds, could mediate the oxidative coupling of phenol and aminoantipyrine, leading to quinoneimine formation, independently of MPO enzymatic activity [25]. They form the good candidates to perform redox mediation of aminopyrine and phenol and thus stimulate the spectrophotometric detection of quinoneimine [25] suggesting an apparent increase of MPO activity rather than a true MPO activity.

In the present study, a differential behavior of the MPO has been noticed in the uremic patients and the causes for the same have been discussed above. Diabetics are prone for coronary events and cardiovascular disease is a major cause of morbidity and mortality in patients with type 2 diabetes mellitus [29]. Hence, we may consider that the precipitation of a cardiac event leading on to death is higher in those uremic patients with a high MPO than in those with low MPO levels. Therefore Myeloperoxidase enzyme may be considered as a biomarker for predicting coronary events in End Stage Renal Disease.

However, further studies with follow-up and large trial groups are required to validate the results of our study.

I am extremely thankful to Dr. K.P.Suresh, Scientist (Biostatistics), NIANP (ICAR), Bangalore, for the statistical analysis. I am also grateful to Dr. Usha Anand, Professor, for helping me in the standardization of serum Myeloperoxidase.