A comparative study of excretion of the components after oral administration of pure baicalin radix scutellariae and scutellariae-paeoniae couple extracts to normal and ulcerative colitis rats.

The use of natural products as herbal medicines has increased steadily over the last decade [1]. Moreover, approximately 80% of the population in Asian countries uses herbal medicines for promoting health and managing common maladies such as cold, inflammation, pain to more serious ones such as heart diseases, liver cirrhosis, diabetes and central nervous system disease [2,3]. Moreover, patients with chronic diseases that are likely to be treated with multiple drugs, use herbal medicines more frequently, thereby increasing the need to study the pharmacokinetics (absorption, distribution, metabolism and excretion) of herbal medicines and drug-drug interactions.

The dried root of Scutellaria Radix (commonly called Huangqin) is widely used in TCM. The main components of Scutellariae Radix are baicalin (BG), wogonoside (WG), baicalein (B) and wogonin (W) Fig.1. Scutellariae Radix and its major flavonoids possess multiple biological and pharmacological effects, including anti-inflammation, anti-viral, anti-tumor, anti-proliferative and anti-bacterial, etc.[7-9]. To date, the pharmacokinetic (PK) profiles of BG and WG in plasma, brain and eyes of rats and rabbits have been reported [10-13]. From literature we know that after oral administration of baicalein plasma levels of baicalein were negligible. The glucuronides/sulfates of baicalein were predominant in the plasma [14-17]. There are various case reports on herb–drug interactions or herb– herb interactions in vivo in recent years, and also some reports on the influence of disease condition on the pharmacokinetic characteristics of drugs [18-20].

Radix scutellariae and Radix paeoniae alba were purchased from Bozhou Medicine Company (Anhui, China.) and authenticated by Prof. Feng Li from the College of Pharmacy, University of Traditional Chinese Medicine (Liaoning, China). Pure baicalin was obtained from Prof. ZhenQiu Zhang (Dept. of Chemistry in our institute, Liaoning University of TCM). Wogonin was purchased from the National Institute for the Control of Pharmaceutical and Biological Products (Beijing, China). The internal standard (IS) arctigenin was supplied by Prof. DeQiang Dou (Department of Phytochemistry in our institute). Baicalein was purchased from Tianjin Yifang Science ＆ Technology Co. Ltd. (Tianjin, China). Wogonoside was purchased from Shanghai Ronghe Science ＆Technology Co. Ltd. (Shanghai, China). Trinitrobenzene- sulfonic acid was obtained from Shanghai Jinmai Co. Ltd. Shanghai China. The solvents used for chromatographic analysis were HPLC grade and were purchased from Fisher Company Inc., USA. Deionized water was prepared in a Mill-Q academic water purification system (Millipore, Bedford, MA, USA). All the other reagents were of analytical grade and provided by Kermel Chemical Co. (Tianjin, China).

Radix scutellariae and Radix Paeoniae Alba were mixed in the ratio of 1.5: 1 g/g and the total weight was 200 g. The mixture was decocted twice by refluxing with 70% ethanol (1: 10 and then 1: 8 w/v) for 1 h, and the solution obtained was concentrated to give an extract of 60.5 g. Radix scutellariae (200 g) was treated as above to provide an extract of 43.3 g. The dried powder was stored at 4 °C before use. For preparation of the dispensing dose, the concentrations of baicalin, wogonoside, baicalein and wogonin in the extracts and pure baicalin were quantitatively determined. The powder extract (0.10 g) was homogenized by ultrasound with 100 mL 60% methanol for 30 min. The solution was filtered through 0.45 μm organic membrane before HPLC analysis. The contents of baicalin (BG), baicalein (B), wogonoside (WG), and wogonin (W) were found to be 17.3, 7.6, 2.4 and 1.7% respectively in Scutellariae-Paeoniae couple extract and 43.6, 19.1, 6.2 and 4.5% respectively in Radix scutellariae extract. The content of baicalin was 95.5 % as pure baicalin.

Sixty male Sprague-Dawley rats, weighing 250 – 280 g, were obtained from the Experimental Animal Department of Dalian University (Dalian, China). Animal welfare and experimental procedures strictly followed the Guide for the Care and Use of Laboratory Animals (US National Research Council, 1996) and the related ethics regulations of Liaoning University of TCM Study protocols were approved by the Institutional Animal Ethics Committee. Rats were housed in an air-conditioned animal quarter at a temperature of 22 ± 2 °C and a relative humidity of 50 ± 2%. All animals received food and water ad libitum. The animals were acclimatized to the facilities for five days, and then fasted with free access to water for 24 h prior to each experiment.

UC was induced in rats according to the model and method described by Oz HS et al [23]. Rats were lightly anesthetized with 10% chloral hydrate solution, and then a medical-grade polyurethane cannula for enteral feeding (external diameter 2 mm) was inserted into the anus and the tip was advanced to 8 cm proximal to the anal verge. Trinitro-benzene-sulfonic acid (TNBS) dissolved in 100% ethanol was instilled into the colon through the cannula (at a dosage of 80 mg/kg). Following the instillation of hapten, the rats were maintained in a head-down position for an additional 30 s to prevent leakage of the intra colonic instillation. The rats were then returned to their cages. They were checked daily for behavior, body weight, and stool consistency. The animals showed reduction in activities, apathy and occult blood was found in their stool; which proved a successful replication of the UC model since these are the criteria used for evaluating UC rats.

Thirty UC rats were divided into three subgroups: the pure baicalin group, Radix scutellariae extract group and Scutellariae-Paeoniae combination extract group. The control rats were divided in the same way. Each group was respectively administrated an oral dose of 0.21 g/kg baicalin in the form of pure compound or coadministrated as mixture, 0.46 g/kg Radix scutellariae extract and 1.16 g/kg Scutellariae-Paeoniae couple extract. All of the compounds were suspended in water and homogenized using ultrasonic technology just prior to dosing. Immediately after the administration of the above compounds, animals were placed individually in glass metabolism chambers (Fuan Inc., Shanghai, China) designed for urine and feces collection. Urine and normal rat feces were collected at 12 – hour intervals throughout the experiment. As it is inconvenient to collect bloody stool of UC rats, we didn’t collect the feces of UC rats. Feces and urine samples were stored at −40°C until analysis of the four flavones.

Known amounts of baicalin, baicalein wogonoside, wogonin and IS were added into 100 μL of blank urine and feces to prepare the following series of standards. The calibration curves of urine and feces showed good linearity in the range of 0.384 ～ 195.5 and 0.096 ～ 49.3 μM for baicalin; 0.241 ～ 123.6 and 0.137 ～ 70.2 μM for wogonoside; 0.070 ～ 36.0 and 0.140 ～ 72.0 μM for baicalein; 0.065 ～ 33.4 and 0.198 ～ 101.2 μM for wogonin. The extraction recoveries and matrix effects at three quality control (QC) concentrations were assayed in sets of six replicates. The CVs of the recoveries were less than 20% at low concentration, and less than 15% at medium and high concentrations. The recoveries were all more than 70%. The means ± SD recovery for IS was 94.1 ± 4.8%. Accuracy and precision of the method were determined by intra-day and inter-day data by comparing the mean of five replicates of each QC sample. Both coefficient of variation (CV) for precision evaluation and relative error (RE) for accuracy evaluation were less than ±14%. The stabilities of baicalin, wogonoside, baicalein and wogonin were determined by analyzing QC samples at three concentrations exposed to encounter during sample storage. The corresponding relative errors were less than ±6% for samples at three concentrations for each reference standard, respectively. Results of the stability test showed that under the experimental conditions the samples were stable throughout the testing process.

The concentrations of baicalin, baicalein, wogonoside and wogonin in urine or feces were multiplied by the respective urinary volume or feces weight collected in each time interval to obtain the total amount excreted in the sampling time. All the results were expressed as means ± standard deviation (SD). The Microsoft Excel was used to calculate the cumulative excretion amounts. Statistical analysis was performed using SPSS software package (version 15.0). Differences between means were considered significant if P ≤ 0.05. 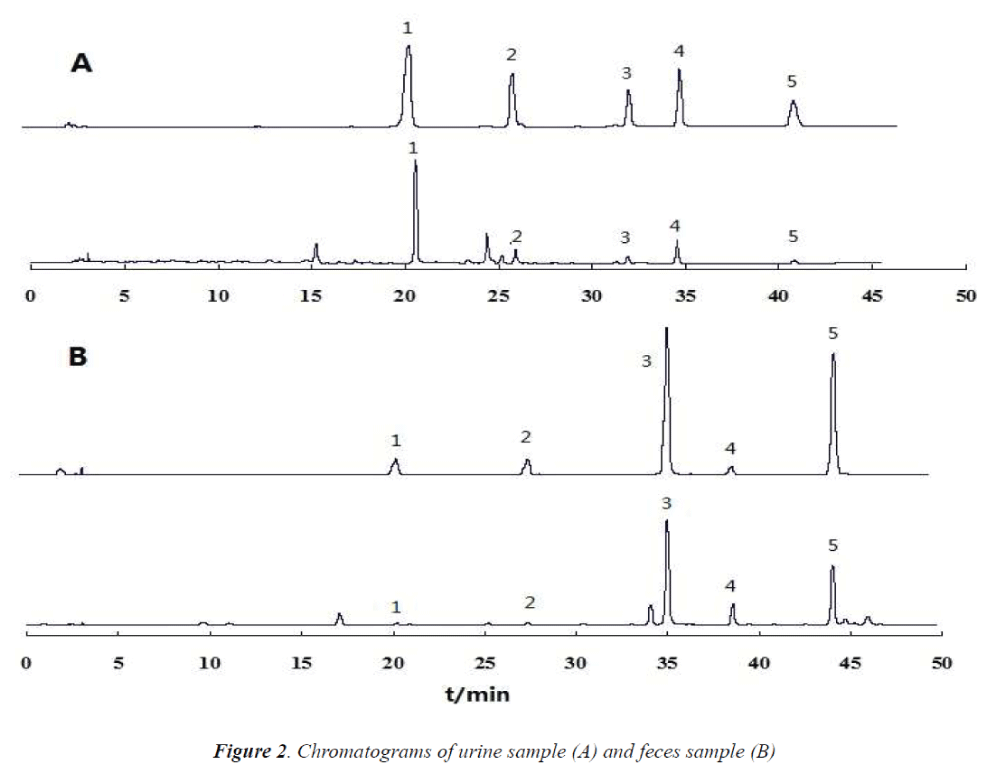 Figure 2: Chromatograms of urine sample (A) and feces sample (B)

Excretion profiles of the four flavonides in urine and feces after oral administration of pure baicalin, Radix scutellariae and Scutellariae-Paeoniae extracts to normal and UC rats. 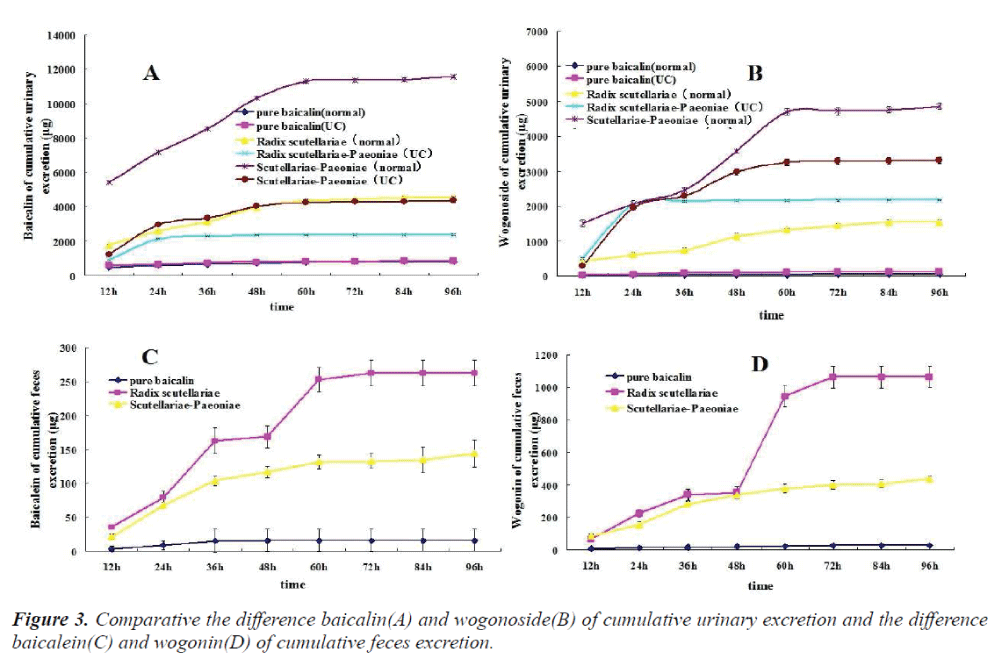 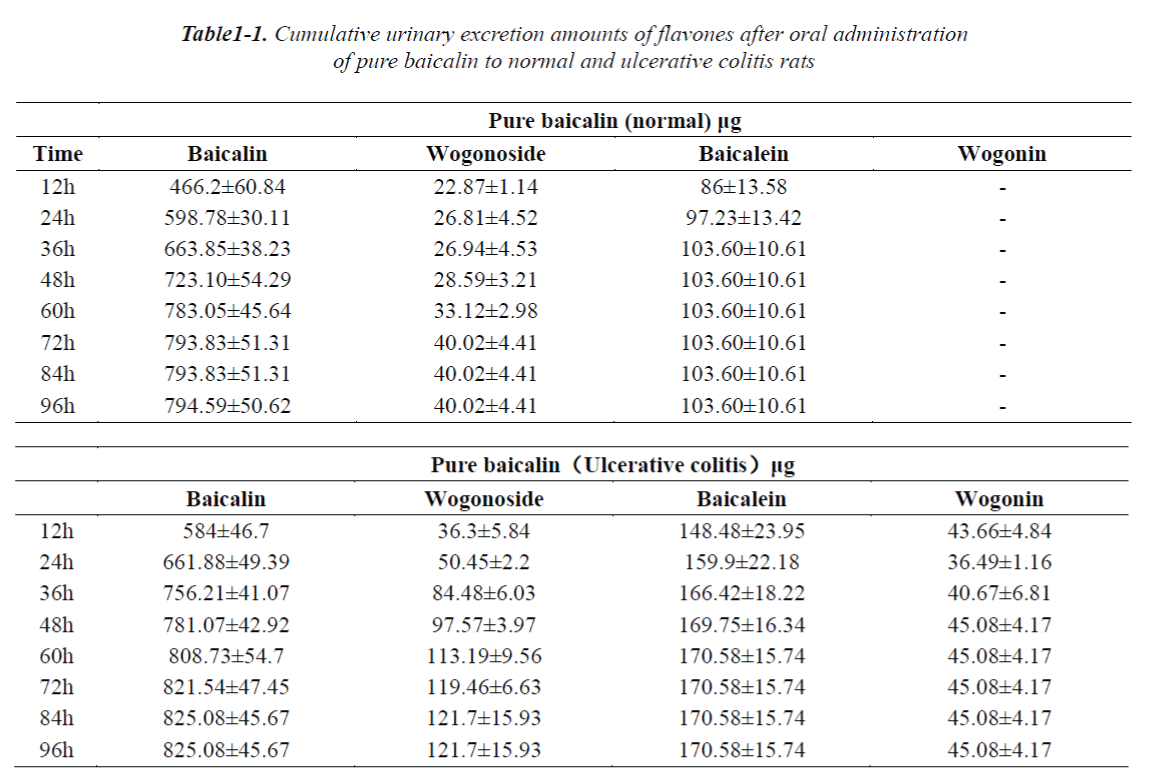 Table 1a: Cumulative urinary excretion amounts of flavones after oral administration of pure baicalin to normal and ulcerative colitis rats 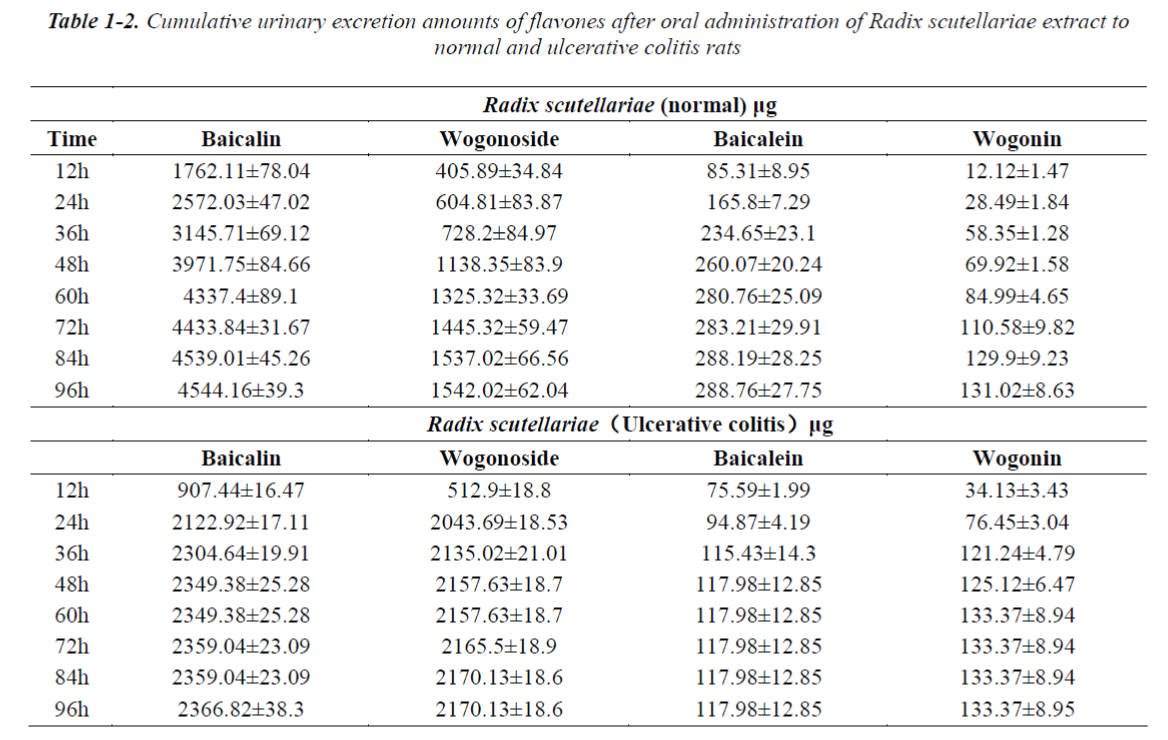 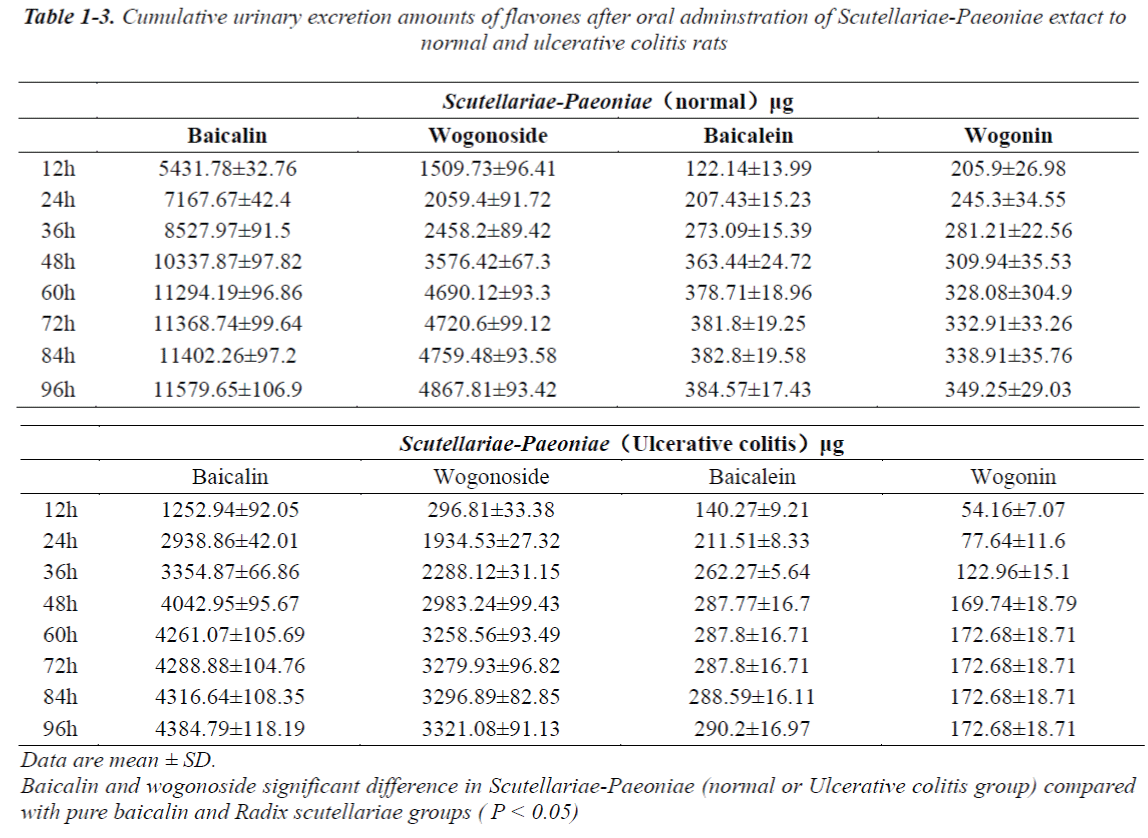 Quantitation of the commercial powder of Scutellariae Radix indicated that baicalin, baicalein wogonoside and wogonin were the major flavone constituents. These flavones have been shown to possess antilipoperoxidant, antiplatelet, and anti-inflammatory activities. They also demonstrated not only cytostatic but also cytotoxic effects on various human tumor cell lines in vitro and suppress tumor growth in vivo. Biological activities of baicalin and wogonoside depended on their conversion to the aglycone form by b-glucuronidase from normal colonic flora and their subsequent absorption [25]. Table 1-1 and 2-1 shows the presence of baicalin and wogonoside as well as baicalein and wogonin in the urine and feces of rats after oral administration of pure baicalin. We had tentatively concluded that the absorbed baicalin could be methylated to wogonoside in vivo and then baicalin and wogonoside are partly converted to baicalein and wogonin by glucuronidase (GUS) and distributed in the rat tissues [26,27]. Li [28] reported that stereoselective transformation by microfloral metabolism in the intestinal tract might have occurred before absorption, showing that the biotransformations from the corresponding flavones, wogonin and baicalein, were stereoselective with a preference. In this report, our results appeared to be consistent with previous reports. 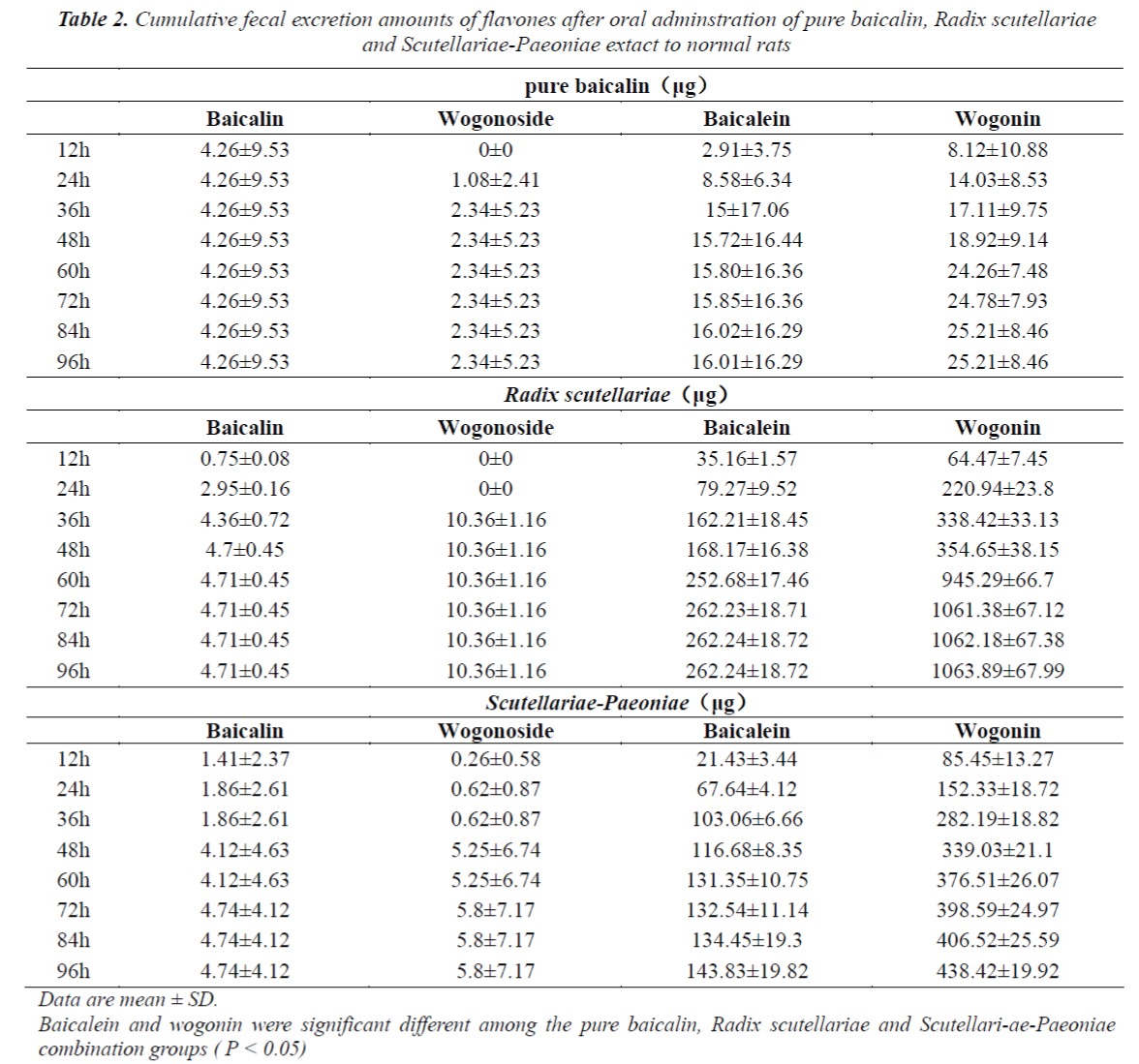 It was also found that the normal groups showed significant differences of urinary excretion compared with UC groups. A tendency of lower urinary excretion was observed in UC rats, regardless of oral administration of pure baicalin, Radix scutellariae or Scutellariae- Paeoniae couple extracts. Physiological phenomenon may be the cause of a decrease in the excretion of the four flavones. We have reported that in UC, orally administered baicalin and wogonoside are absorbed more completely leading to higher plasma baicalin and wogonoside compared to normal rats (personal communication). So, when UC rats were admistrated pure baicalin, Radix scutellariae or Scutellariae-Paeoniae couple extracts, the bioavailability of the flavones were enhanced in contrast to normal rats.

Baicalin, wogonoside, baicalein and wogonin all were excreted in the rat feces. But excretion of baicalein and wogonin was primarily in the feces. Cumulative fecal excretion amounts in rats were enhanced by Radix scutellariae (RS) extract or Scutellariae-Paeoniae couple extract. After oral administration of pure baicalin, Radix scutellariae and Scutellariae-Paeoniae extracts as combination to rats, the cumulative amounts of baicalin, baicalein, wogonoside and wogonin in rat feces reached plateau value at 60 h, 60 h, and 84 h respectively, and the cumulative amounts of these flavones in rat feces also differed significantly (P < 0.05). Cumulative fecal excretion in pure baicalin group was the least. The results indicate that the amount of flavones excreted in feces may be directly proportional to the area under curve (AUC)of plasma, and compatibility of medicines could result in the differences of excretion.

In summary, we report for the first time the urinary and fecal excretion parameters of the four flavones after oral admistration of pure baicalin, Radix scutellariae or Scutellariae-Paeoniae extracts to rats; and suggest that urinary and fecal excretion of the four flavones could be affected by herb-drug interaction in vivo, and ulcerative colitis could influence the potential excretion of the four flavones. From the results we have derived a hypothesis that Radix scutellariae and Radix paeoniae alba in combination seemed suitable for curing ulcerative colitis disease. The results of the present study highlight that drug-drug interactions, herb-drug interactions and herbherb interactions have always existed and affected the excretion of herbal ingredients. The huge nuber of active ingredients in TCM have made them suitable for multitarget actions, and this remedy might be a reasonable prescription [30].