A case of unusual foreign body ingestion in a toddler.

The ingestion of foreign body is one of the important childhood emergency requiring urgent care depending on type and site of impaction. Many a times ingestion remains unrecognized and asymptomatic. We report a similar case of metallic foreign body which passed through anus asymptomatic, in spite of expert surgeon's advice of endoscopic removal.

The ingestion of foreign body is one of the important childhood emergency requiring urgent cares depending on type and site of impaction. Foreign body ingestion is very common in toddler age group1 as they explore the external environment with hands and mouth along with less developed chewing abilities [1,2]. Many a times ingestion remains unrecognized and asymptomatic at presentation.

One year ten months old male child was brought by his mother in the evening suspecting ingestion of a pair of identical keys in a ring (Figure 1) which was last seen in babies hand 4 h before reaching hospital emergency. We did a straight x-ray abdomen (Figure 2) on admission, which showed a radio-opaque key in the stomach adjacent to L1 vertebra. Two pediatric surgeons have opined for endoscopic removal without wasting any time as it is going to obstruct the gut. The suspicion was more obvious as two identical keys in a ring could move apart and change its alignment along its long axis leading to impaction at pylorus. The parents were counseled about the likely complications of bleeding, obstruction, pain abdomen and scarring, but they refused any surgical intervention. Due to non-availability of parental consent a conservative approach was followed with high fiber diet like banana, papaya, vegetable soup and rice meal at night. Repeat x-ray next morning after nightlong asymptomatic period which locates key is at sigmoid colon (Figure 3). The exact length of keys (Figures 4 and 5) is only understood when it has passed with morning stool. 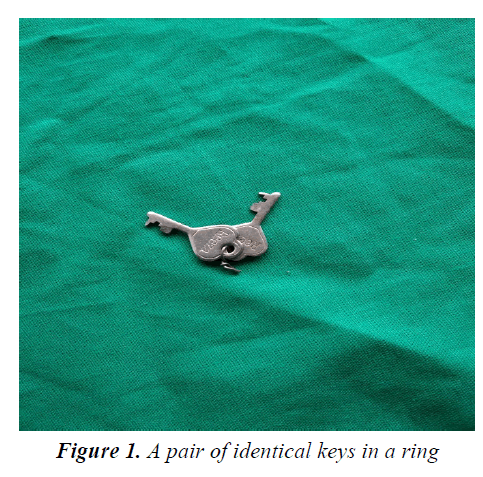 Figure 1. A pair of identical keys in a ring. 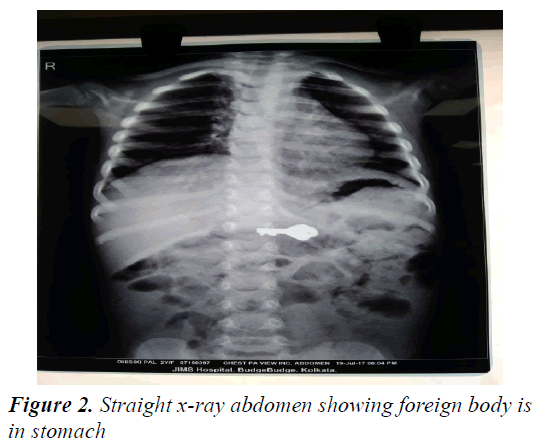 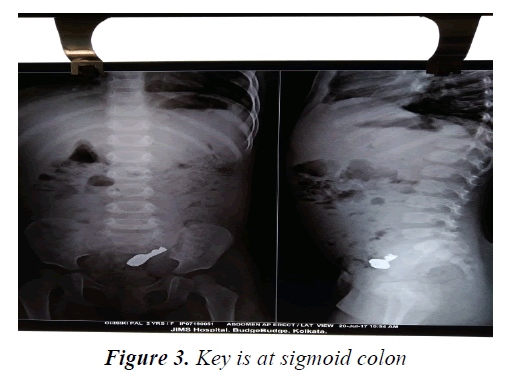 Figure 3.Key is at sigmoid colon.

Most swallowed foreign body which has passed cricopharyngeal aperture of esophagus reaching into the stomach will harmlessly pass through the gastrointestinal (G.I.) tract [3]. However smooth passage depends on size and shape of the object with respect to anatomical constrictions of G.I. tract. Dr. Kelson and Liacouras [4] of children hospital of Philadelphia in her article on foreign body stomach published in 20th edition of Nelson Textbook of pediatrics suggested that in infants and toddlers, objects >3 cm in length or >2 cm in diameter do not usually pass through the pylorus and in older children and adults, oval objects larger than 5 cm in diameter or 2 cm in thickness tend to lodge in the stomach and should be endoscopically retrieved [4]. First x-ray done at our hospital as in Figure 2 showed there is one key but when the baby passed stool after 20 h we could visualize two identical metallic key with a ring. Fortunately two identical keys moved through alimentary tract as one piece.

In our case both the keys (Length 2.9 cm, breath 1.3 cm as in Figures 4 and 5) has uneven edge with a ring made of sharp pointed metallic wire raised a valid question, should we intervene or wait and watch? 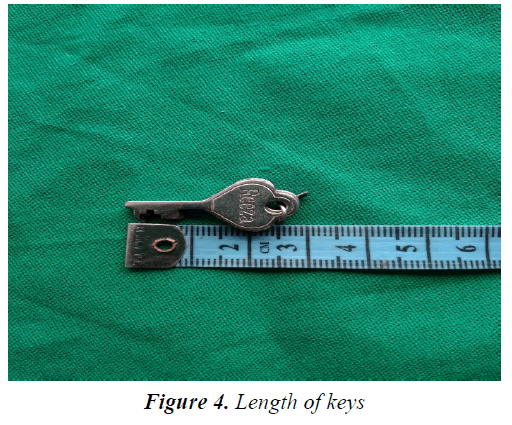 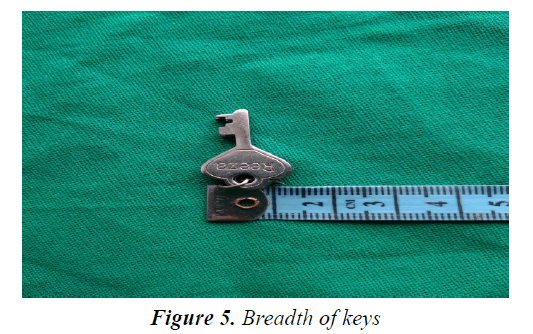 Many a times ingestion remains unrecognized and asymptomatic. First and second X-rays done at our hospital showed as if there was one key. However, when the baby passed stool after 20 h we could visualize two identical metallic keys with a ring. Fortunately, two identical keys connected by a ring were considered moved through alimentary tract as one piece. 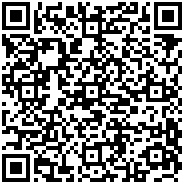