A 45 yo male presented to the Emergency Room with dyspnea, orthopnea, fatigue, and lower extremity edema.

The patient presented with hypertension (BP 200/129 mm Hg), coarse crackles at bilateral lung bases, jugular venous distention (10 cm), and 2+ bilateral lower extremity edema. Laboratory studies are given in Table 1. He developed a second episode of angioedema during his current course of illness, and this was 2 months after the patient had been off lisinopril.

Light microscopy showed eighteen glomeruli. One was globally sclerosed, seventeen had diffuse, global, nodular matrix expansion, marked mesangial hypercellularity, obliteration of the capillary lumina by endocapillary hypercellularity, and extensive eosinophilic, strongly PAS-positive material (Figure 1a). There was diffuse splitting of the glomerular BMs, and two glomeruli with crescents; one fibrocelllular, and one cellular with associated adhesion to Bowman’s capsule and GBM break. There was 10% interstitial fibrosis, without interstitial inflammation. Arteries were unremarkable. 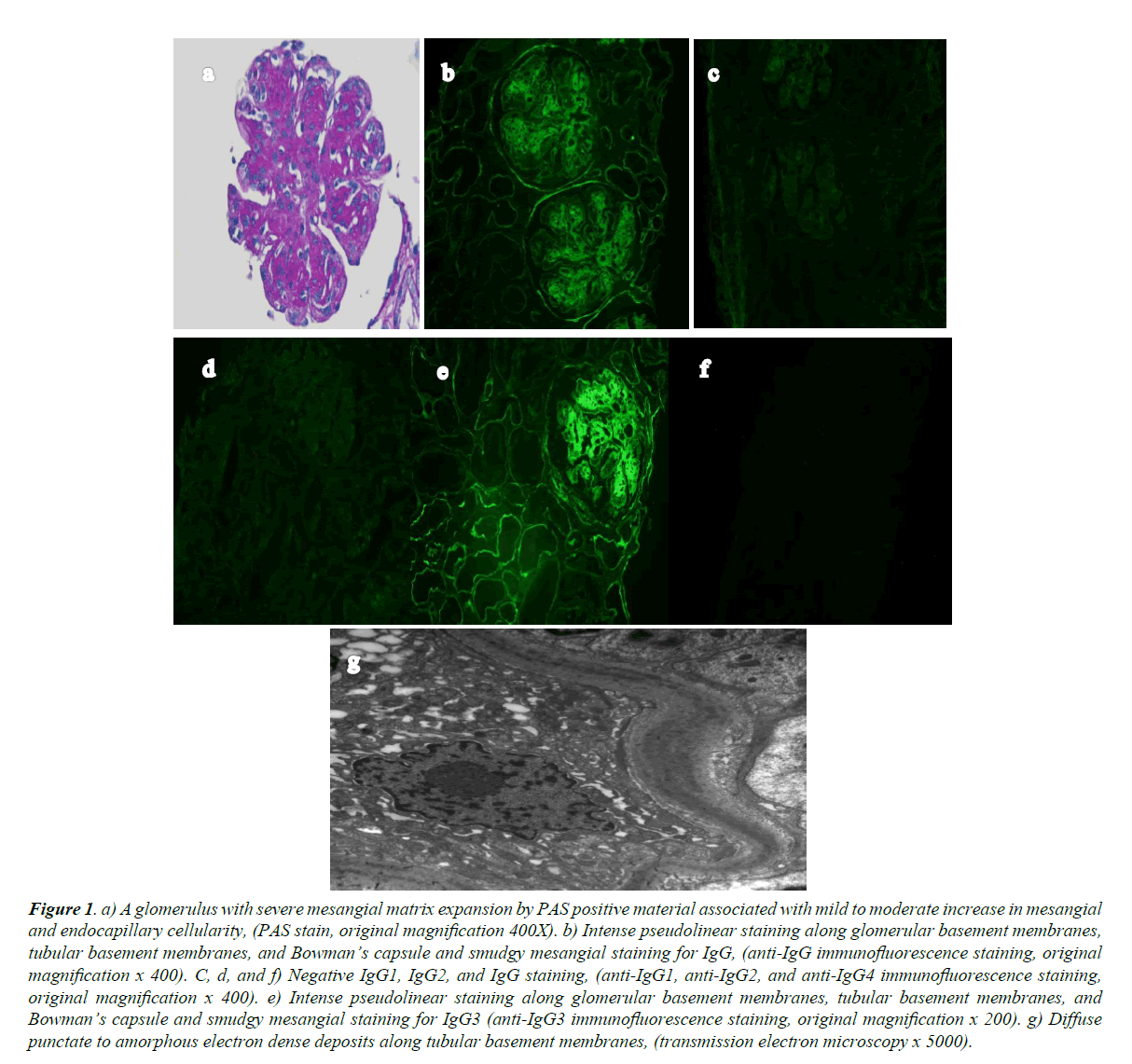 On electron microscopy (EM), the GBM lamina densa had normal thickness. Scattered small to medium amorphous and punctate deposits were present along the subendothelial GBM with approximately 60% podocyte foot process effacement, and no fibrin tactoids or tubuloreticular aggregates. Mesangial matrix was significantly increased, with moderate increase in cellularity, frequent amorphous mesangial deposits, and many tubular BM punctate and amorphous deposits.

Bone marrow biopsy demonstrated normocellular marrow (50-60% cellularity), 5% plasma cell neoplasm, which exhibit monotypic kappa light chain restriction by flow cytometry, reported as compatible with a plasma cell neoplasm. There was no overt expression of heavy chains. Skeletal survey was negative for lytic lesions. The diagnosis of Monoclonal Gammopathy of Undetermined Significance (MGUS) could not be confirmed due to the absence of M protein on SPEP. This patient met only two of the three criteria required for the diagnosis of MGUS, i.e., the presence of <10% plasma cells on bone marrow biopsy, and absence of lytic bone lesions. Treatment was aimed at the underlying plasma cell dyscrasia. The patient began dexamethasone and bortezomib, based on anecdotal evidence [3,6]. SCr improved to 1.0 mg/dl at 18 months, but anemia persisted out of proportion to renal dysfunction. A second bone marrow biopsy 11 months after initial hospitalization, showed no abnormal cell proliferation.

While hospitalized, the patient developed another episode of angioedema, unresponsive to solumedrol and antihistamines. C1q level was low at 7.2 mg/dL, suggesting Acquired C1 Inhibitor Deficiency. C1 inhibitor level was normal at 30 mg/ dl, and Cl functional level was lost on send out. The patient began aminocaproic acid, with no further angioedema during the hospital stay.

Table 3. Testing the hypothesis: Disease processes associated with an intact immunoglobulin mostly do not present with a negative SPEP and positive UPEP. This is because intact immunoglobulins cannot be cleared sufficiently into the tubular lumen, and hence be excreted as urine with undetectable serum levels, even with glomerular “porosity”.

Our patient’s younger age and kappa clone favor HCDD over AH Amyloid. The heavy chain is produced with a light chain, both of which are free. However, only the heavy chain deposits are pathogenic. This contrasts with Light and Heavy Chain Deposition Disease (LHCDD), where truncated heavy and light chains associate with each other, and behave as intact immunoglobulin, with both SPEP and UPEP either positive or negative.

Monoclonal Immunoglobulin Deposition Disease (MIDD) classification is based on deposition of a component of monoclonal immunoglobulin in kidneys and extra-renal tissues. HCDD is the least common MIDD.

MIDDs are distinctly different from other deposition diseases such as amyloid, immunotactoid glomerulonephritis, and cryoglobulenemia. MIDDs have non-organized immunoglobulin deposits, and are congo red stain negative. HCDD demonstrates this non-organized pattern in its glomerular truncated heavy chain distribution [13].

MIDD includes LCDD and LHCDD, which are often clinically indistinguishable from HCDD, with immunofluorescence needed for diagnosis. MIDDs are linked with immunoproliferative disorders, but have also been reported in the absence of overt malignancy, often presenting with renal dysfunction.

Immunofluorescence stains positive for a single type of heavy chain (alpha, gamma or meu) along the glomerular and tubular BMs, and sometimes in the nodular lesions. Complement components (particularly C1) may also be seen in a granular pattern along the BM [13].

Stains should include kappa and lambda light chains, as both are negative in HCDD.

EM shows punctate or amorphous electron dense deposits along the tubular and glomerular BMs, and within mesangial nodules.

The false positive hepatitis C antibody and hypocomplimentenimia in HCCD can be misleading. Lin et al. in a report of 34 cases of MIDD found 4 of 5 HCDD patients had a positive HCV antibody test, undetectable HCV by PCR, and no evidence of active hepatitis [13]. Abnormal truncated heavy chains may interfere with the HCV immunoassay to cause a false-positive HCV antibody test [13].

Binding of C1 to the Fc portion of IgM or IgG activates the classic component pathway. C1 has 3 subunits, C1q being the initial binding subunit, triggering proteolytic cleavage of C1r and C1s. C1s then acts as a protease for C4 and C2. Uncontrolled activation of C1s leads to low C2 and C4 levels [16,17].

Low levels of C2, C4 should raise suspicion for acquired angioedema. Confirmatory tests include low C1q, decreased C1 inhibitor functional level, and low or normal C1 inhibitor level [16,17]. Several therapies including steroids, epinephrine, antihistamines, aminocaproic acid have been tried, none have proven effective and treatment should be aimed at the underlying disease.

Although HCDD is uncommon, it must be suspected in patients presenting with nephritic syndrome, hypocomplementenemia, and monoclonal immunoglobulin components in urine electrophoresis, possibly with negative serum electrophoresis. It is important to remember that the hepatitis antibody test may be falsely positive [14]. Current treatments include high dose steroids, bortezomib and autologous stem cell transplant [3,20]. Although prognosis remains uncertain, some cases demonstrate a response to these therapies with preserved renal function over several years.