1Department of Obstetrics and Gynaecology, Faculty of Medicine, the University of Inonu, Malatya, Turkey

2Department of Pediatrics, Faculty of Medicine, the University of Inonu, Division of Paediatric Cardiology, Malatya, Turkey

Fetal atrial flutter (AF) is the second common fetal tachyarrhythmias that exist in less than 1% of all pregnancies. It may be related to congestive heart failure, hydrops, neurologic morbidity, or intrauterine death. Early detection and treatment are crucial for getting better neonatal outcomes. We presented a case of fetal atrial flutter diagnosed in the 36th week of gestation and managed successfully by cardioversion in the postpartum period. Cardioversion could be carried out successfully for the treatment of atrial flutter especially in arrhythmias resistant to antiarrhythmic medication during the immediate postpartum period. The recurrence rate of AF after this procedure is very low.

Fetal arrhythmias can be present in 1% of all pregnancies, and the majority of these arrhythmias are determined benign and transient such as isolated extrasystoles. Approximately 10% of arrhythmias have been reported persistent and fetal tachyarrhythmias compose the majority of these abnormal rhythms [1]. Fetal atrial flutter (AF) is the second common fetal tachyarrhythmias that exist in less than 1% of all pregnancies. Fetal AF is characterised as a rapid regular atrial rate of 300-600 bpm accompanied by equal or slower ventricular heart rate due to various degree of atrioventricular (AV) block [2]. There is a 2:1 AV block more than 80% of fetal AF [3]. The reentrant circuits induced by premature atrial impulses have been proposed as the primary underlying mechanism that leads atrial flutter. Besides, it has been suggested that the diameter of fetal atrium has a significant role in the atrial flutter formation. Typically the atrial re-entry circuit is limited to a small area, measuring less than l cm in the right atrium of the fetus. It has been speculated that expansion of the fetal atrium with the progress of the pregnancy predisposes to the formation of fetal atrial flutter so that this hypothesis may explain the finding of fetal atrial flutter particularly in the third trimester of gestation [4]. The incidence of fetal cardiac anomalies associated with AF was reported approximately 6%, including atrial septal defect, hypoplastic left heart syndrome, Ebstein’s malformation and cardiomyopathy [5]. And this condition may be related to congestive heart failure, hydrops, neurologic morbidity, or intrauterine death especially more than 20% of cases associated with fetal cardiac anomalies. Early detection and treatment are crucial for getting better neonatal outcomes [6].

We aimed to present a case of fetal atrial flutter diagnosed in the 36th gestational week of pregnancy and managed successfully by cardioversion in the postpartum period.

A 22-year-old pregnant with a history of a healthy living child born by cesarean section was referred due to fetal tachycardia diagnosed at a secondary care healthcare institution in her routine obstetric visit during the 36th gestational week. There were no abnormal features in medical and current obstetric history. Also, there were no pathologic findings in her physical examination and laboratory findings. Obstetric ultrasonography showed a fetus with biometric measurements compatible with 36 gestational weeks. The placenta was observed in the anterior wall of the uterus with normal appearance, and amniotic fluid was within normal limits. Fetal cardiac examination revealed fetal tachycardia with a ventricular rate between 200-210 beats per minute (bpm) and an atrial rate between 400-420 bpm (Figure 1). The heart structure was observed normal except right atrial dilatation. M-mode for apical 4-chamber view showed long ventriculoatrial (VA) tachycardia with a ratio of 2:1 atrioventricular (AV) conduction (Figure 2). There was no sign of hydrops fetalis. There were no abnormal findings in the other fetal organs. The patient and her partner were informed about the fetal status and the option of fetal and neonatal treatment options. Neonatal treatment option was considered on a preferential basis due to the near term gestational age. Emergency cesarean section was planned to the patients whose previous delivery was performed via cesarean section. Before the delivery, pediatric cardiology and neonatology consultation were conducted. APGAR score 9/10, 2970 g, 49 cm male infant were delivered by cesarean section. Maternal post-operative follow-up showed no surgical complications; the patient was discharged from hospital 2 d post surgery. 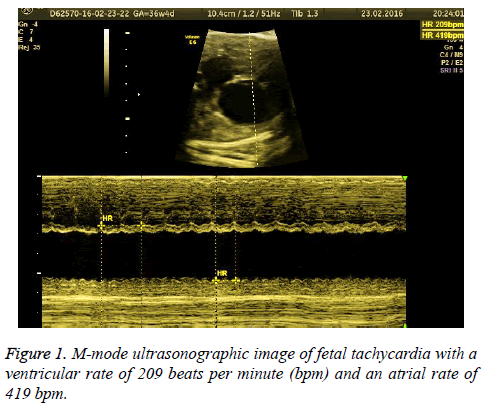 Figure 1: M-mode ultrasonographic image of fetal tachycardia with a ventricular rate of 209 beats per minute (bpm) and an atrial rate of 419 bpm. 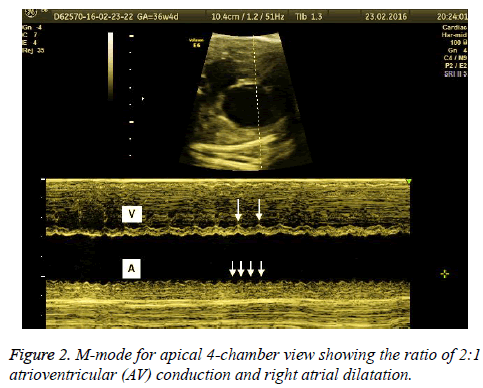 In postnatal period neonate was transferred to the neonatal intensive care unit (NICU). The postnatal electrocardiography (ECG) also confirmed the prenatal diagnosis of atrial flutter and iv adenosine (0,1 mg/kg) was administered as the first-line treatment. Due to hemodynamic deterioration despite iv adenosine treatment, synchronous cardioversion (a direct shock of 6 joules only once with the strip running) were performed by sedation with midazolam before the procedure. After the procedure, there was immediate conversion to sinus rhythm with a rate of 140 bpm were observed. After hemodynamic stabilisation, digoxin was started for prophylactic antiarrhythmic medication. Transthoracic echocardiography was demonstrated Ebstein’s anomaly with first-degree tricuspid valve regurgitation and patent foramen ovale and normal ventricular function and dimensions. During the follow-up clinic visits, normal electrocardiogram with normal heart rate and rhythm were observed. Neonate was discharged at postnatal 10th day.

Fetal heart rate monitoring has a significant role in the evaluation of fetal well-being. Fetal heart rate abnormalities occur almost 1% of all pregnancies, and although the greater part of these abnormalities is benign, a small part of these pregnants referred for fetal arrhythmia have clinically severe rhythm abnormalities, particularly tachyarrhythmias [7]. One-fifth to one-third of all tachyarrhythmias encountered in the fetal period was reported as atrial flutter. Identification of fetal AF has increased due to the routine use of high-resolution obstetric ultrasounds, close fetal heart rate monitoring for fetal surveillance and the widespread clinical practice of routine third-trimester ultrasonography assessment [8]. Especially when the fetal arrhythmia is present more than 50% of the time during obstetric ultrasonography, fetal echocardiography and M-mode ultrasound should be considered to distinguish the type of arrhythmia and to define associated cardiac anomalies. In M-mode ultrasound; the atrial rate is usually determined faster than the ventricular rate with intermittent (frequently 2:1) atrioventricular conduction. In our case, fetal cardiac rhythm evaluation with M-mode ultrasound was revealed fetal tachycardia with a ventricular rate between 200-210 bpm and the atrial rate in between 400-420 is compatible with 2:1 atrioventricular conduction. Jaeggi et al. reported perinatal outcomes of 37 echocardiographically documented and published atrial flutter cases [5]. Consistent with our case, a predominance of 2:1 AV conduction was reported (15/37) in their case series and atrial flutter was detected almost one-third of all clinically significant tachyarrhythmia.

Prenatal management and prognosis of a fetus with AF depend on the gestational age at onset, the development of heart failure or hydropic change and associated cardiac anomalies. Krapp et al. revealed that fetal hydrops was detected 38, 6% of all fetuses with fetal AF and 40, 5% of fetuses with fetal supraventricular tachycardia [9]. They suggested that fetal hydrops develops primarily in re-entrant supraventricular tachycardias when the ventricular rate is greater than 210 bpm. In our case, the fetal ventricular rate was not exceeded 210 bpm, and there was no finding of fetal hydrops. Furthermore, we detected right fetal atrial dilatation in the prenatal assessment that was considered as Ebstein's anomaly in postnatal echocardiography. It was reported that about 20% of fetal AF was found associated with structural heart disease and these cases were closely related to poor prognosis. For this reason, early detection of fetal atrial flutter and associated cardiac malformations is essential for preparing appropriate cardiac interventions in the neonatal period to achieve the optimal neonatal outcome.

In fetal AF cases, transplacental therapy has defined as the most common treatment. For this purpose, antiarrhythmic agents primarily digoxin as first-line treatment and flecainide, sotalol, amiodarone, procainamide, verapamil as the secondline treatment can be used [10]. Delivery of the fetus diagnosed AF in the late preterm or early term period is considered more efficient with fewer adverse effects to the pregnant and the fetus. The response of the transplacental treatment of hydropic fetuses is reported considerably worse than the non-hydropic fetuses. Lisowski et al. demonstrated that anti-arrhythmic drugs were successful to convert sinus rhythm in 43.3% of hydropic fetuses and 80% of non-hydropic foetuses [11]. Also, Simpson and Sharland conducted a retrospective study that analysed 127 fetuses with tachyarrhythmias, of which 105 had supraventricular tachycardia (SVT) and 22 had AF. They reported the response rate of digoxin monotherapy was 62% in non-hydropic fetuses and 20% of hydropic foetuses [12]. In our case, we did not administer transplacental therapy because fetal atrial flutter was diagnosed near term and after the counselling about the treatment options with the family, we considered direct postnatal treatment. After birth, conversion of normal sinus rhythm was accomplished by electro cardioversion after initial treatment failure with digoxin treatment. Also, Yu et al. reported a case of fetal atrial flutter with pericardial effusion. They performed a single electrocardioversion and a short period of digitalization after birth, and consequently, a normal sinus rhythm was achieved successfully through electrocardioversion [13].

Written informed consent was obtained from the patient for publication of this Case report.