we show a case of age related macular degeneration treated with Lucentis in the left eye for sixtimes, that failed and worsened after all sessions, and developed a recurrent occult neovascular membrane, a case that came from another eye center service, where they failed to switch to a different drug in an appropriate time, worsening the outcome to that one eye (left). The patient came to us in our service and the symptoms started in the better visual acuity eye (right) recently,and we promptly started the treatment, with Intraocular Dexamethasone Implant. We did not let the other eye without attention, despite the worse visual and anatomic outcome, also treated with a switch from Lucentis to Aflibercept. Both eyes had excellent results, even though the right eye recurred after a while and we used the same treatment due to good results at first (the membrane reactivated), and was treated again with the same medication (dexamethasone implant) and the chronic eye (left) was treated again, as well with Aflibercept, not because of recurrence, but because that one eye had an excellent anatomic resolution of the pigment epithelial detachment. After the second treatment, the left eye got better and did not worsen.

The treatment modalities came such as Photo Dynamic Therapy (PDT) with verteporfin and Transpupillary Thermo Therapy (TTT) [1] more recently intraocular injections for Vascular Endothelial Growth Factor (VEGF) inhibition and intraocular implant with dexamethasone, the latter far better than the corticoid used years ago solely for the treatment of some maculopathies such as cystoid macular edema and other diseases [2-4], such as uveitic macular edema So the development of pharmacological treatment for the membrane came to many evolving drugs used in ophthalmology today, starting with pegaptanib sodium (Macugen), this first one currently out of market, and other drugs under many current studies such as bevacizumab (Avastin). Ranibizumab (Lucentis) is also an option and Aflibercept (Eylia) was approved and being used in many clinical protocols [5]. The patient with PED (pigment epithelial detachment), which could be a signal of occult choroidal neovascular membrane [6-8] in the scope of age related macular degeneration also makes the treatment even more difficult and the differential diagnosis often times combines diseases such as Polypoid Vasculopathy and even the very common Central Serous Chorioretinopathy in Figure 1, many times thought as a diagnosis but, as we advanced with better diagnostic tools, to state OCT-A (Optical Coherence Tomography Angiography), it is shown that for many times could be actually be mistaken for a choroidal neovascular membrane. Still used today is indocyanine green angiographyAge-related macular degeneration (AMD) is a leading cause of visual impairment in the world. It’s worse complication, the choroidal neovascular membrane, especially in the sub macular form, usually affects life quality and functional development of one who does not seek for the appropriate treatment in due time. In the past, the membrane was treated with laser photocoagulation, backed up by the MPS (Macular Photocoagulation Study) [9], and many eyes had the membrane treated irrespective of the low visual acuity that could actually result, knowing that after some time the vision would get somehow better, as well as the contrast sensitivity, but this treatment today is considered out of date and it is no longer performed which discarded in our case polypoidal choroidal vasculopathy (PCV), one important differential to this case, which presents as a serosanguinous maculopathy, being a variant of neovascular age related macular degeneration. PCV was described as a type 1 choroidal neovascularization (CNV) [10-12] with or without a branching vascular network with polypoidal dilated vessels located between the retinal pigment epithelium (RPE) and Bruch membrane (Figure 2) [13]. Severe visual acuity loss may occur in patients secondary to repeated exudation episodes, scarring, hemorrhages, fibrosis, and others. The pathophysiology of AMD includes diffuse thickening of the inner aspect of Bruch's membrane associated with soft drusen and are often times accompanied by abnormalities of the Retinal Pigment Epithelium (RPE) with focal hyperpigmentation [14-16]. In exudative neovascular AMD, three patterns of Choroid Neovascularization (CNV) have been defined growth into the plane between the RPE and Bruch's membrane type 1 growth between the retina and RPE (type 2) [17] and retinal angiomatous proliferation within the retina type 3 Serum and blood leak from these fenestrated vessels and separate Bruch's membrane, the RPE and the retina from each other, leading to the accumulation of intraretinal fluid, resulting in generalized thickening of the retina or the formation of cystic spaces (Figure 3), causing the photoreceptors to become misaligned, and eventually degenerative changes occur with cell loss and eventual fibrosis [18-24]. 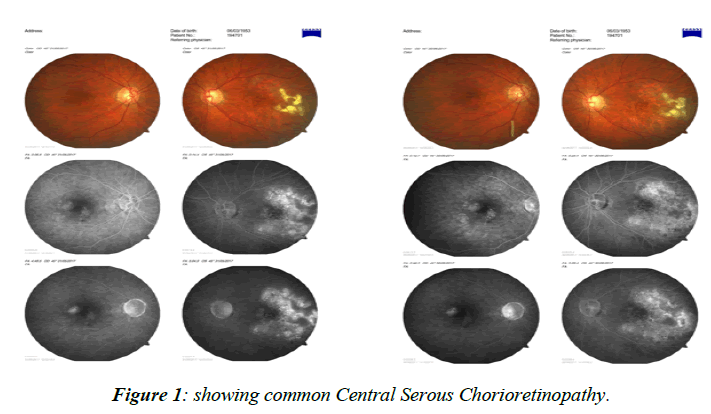 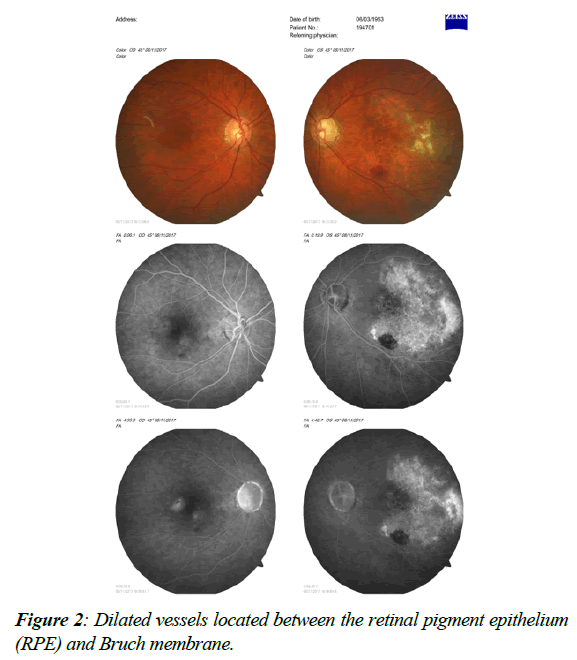 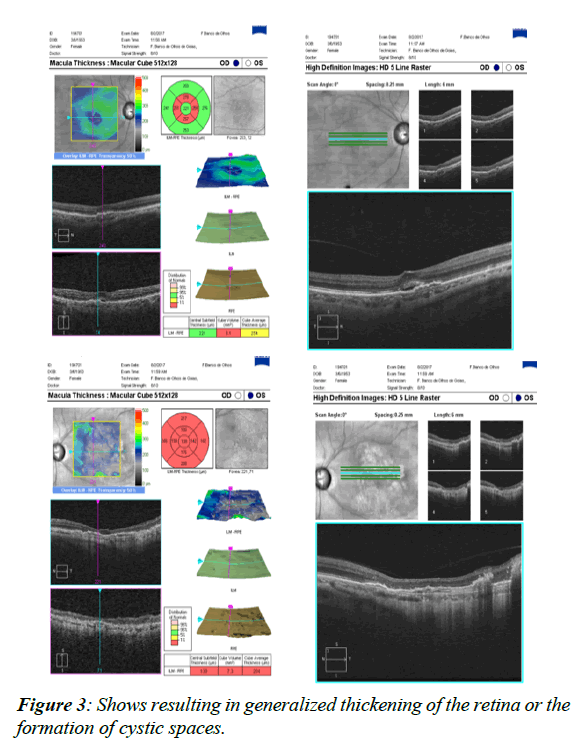 Figure 3: Shows resulting in generalized thickening of the retina or the formation of cystic spaces.

Patient had two intraocular Aflibercept injections in the left eye and two Intravitreal Dexamethasone implant in the right eye; all procedures occurred with only topic anesthesia. On March 6, 2007 Patient had normal visual acuity, 20/20 OU. The intraocular pressures were 21 and 22, in OD and OS, respectively and the retinas were normal. On February 24, 2011 Patient already diagnosed as glaucoma, on treatment. Dec21 2012 Patient already diagnosed as glaucoma, on treatment. May, 2017 the Patient with 64 years old complained of metamorphosis in the right eye for four months. He came after a long time in another retinal service, where treatment for the left eye, to state six intraocular injections of Ranibizumab, with no good visual acuity [25]. The visual acuity at that time was 20/80 and counting fingers, respectively, with best correction. Intraocular pressures were normal, and the patient was being treated for glaucoma, with glaucoma drops. We promptly indicated for the patient Intravitreal Dexamethasone to the right eye, because we knew the past ocular history of anti-vega medication and bad result for the left eye (Ranibizumab), and also indicated Aflibercept for the left eye, which has a worse outcome and only counting fingers vision, as the “switch” medication for the pigment epithelial detachment [26]. Also we asked for OCT (Ocular Coherence Tomography), ICG (Indocyanin Green) and OCT-A (OCT-angiography) to discard Polypoid vasculopathy (PCV). On May 31, we had color and angiography images from the patient, showing a right pigment epithelial detachment with pooling hyper fluorescence and left multiple pigment epithelial detachments with diffuse leaks. 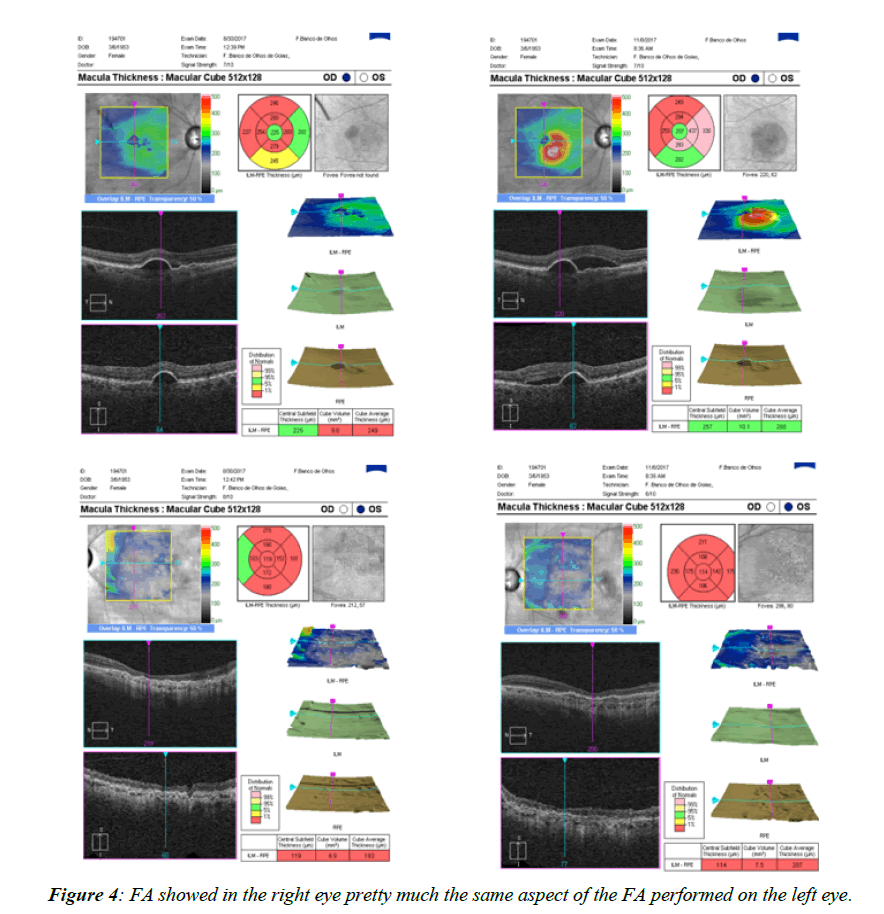 Figure 4: FA showed in the right eye pretty much the same aspect of the FA performed on the left eye. 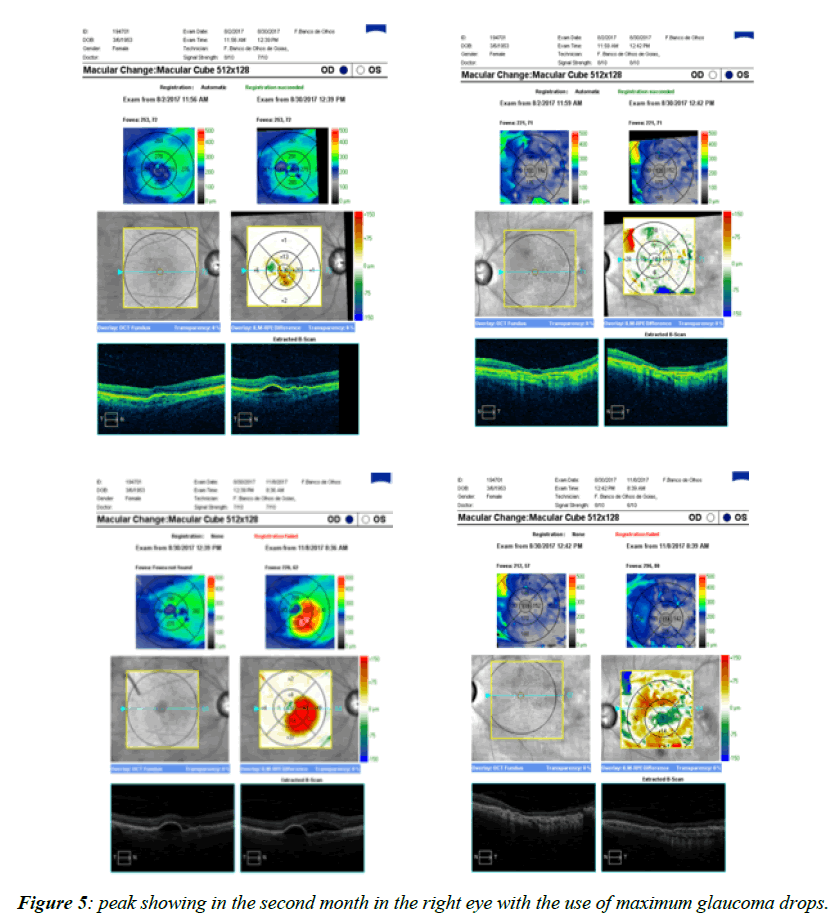 Figure 5: peak showing in the second month in the right eye with the use of maximum glaucoma drops.

The main conclusion we arrived at from this study is that we need to analyze all treatment options available for pigment epithelial detachment, as well as compare earlier treatments, taking into consideration the patient history and response to other treatments We observed that the switch between drugs is an important issue to consider as we applied to this case the switching of ranibizumab (performed in another service) to aflibercept (performed by us), and the decision to start intravitreal dexamethasone to the right eye (not to repeat the use of anti-Vegf that gave a bad result to the patient in the past, when treated as explained above) both drugs performed their tasks the best, and we keep on with the same treatment knowing the switch was well performed, thus making it more sensible to follow the patient up and keep the track of the right decisions. The patient is currently being followed, and we hope stability is getting to the point.