A case of adult female with adenoid hypertrophy

This a rare case of adenoid hypertrophy in a 23 years old Saudi non-smoker female, who presented with severe bilateral nasal obstruction, mouth breathing, anterior nasal discharge, snoring for the last 7 months. The nasopharynx was examined by flexible nasopharyngoscope, which showed a big mass occupying the nasopharynx. Under general anesthesia, adenoidectomy was performed. Immediately after the surgery, the patient’s symptoms were completely relieved.

Wysocka et al. [2] reviewed that, in 1724, Santorini described the nasopharyngeal lymphoid aggregate or ‘Lushka’s tonsil’. They added that Wilhelm coined the term adenoid to apply to what he described as ‘nasopharyngeal vegetations’ in 1870. They also noted that it appears to have an important role in the development of the immunological memory in children.

Physiological adenoid hypertrophy may occur in children aged 6 - 10 years. This is usually followed by atrophy at the age of 16 years [3]. Removal of the adenoids during childhood may be immunologically undesirable [4].

Adenoid enlargement is quite uncommon in adults. Since examination of the nasopharynx by indirect posterior rhinoscopy is rarely adequate, many cases of enlarged adenoid in adults can be misdiagnosed and accordingly maltreated [5].

In this case report, a rare case of 23 years old Saudi female who presented with severe bilateral nasal obstruct tion due to adenoid hypertrophy is being described after obtaining her permission and consent.

On May 2nd 2010, a 23 years old Saudi female attended the outpatient clinic at a private hospital in Jizan Area, complaining of severe bilateral nasal obstruction, mouth breathing, anterior nasal discharge, snoring for the last 7 months. Symptoms increased with time, but in the last one month she had severe nasal obstruction, not responding to local or systemic decongestants. She was nonsmoker. 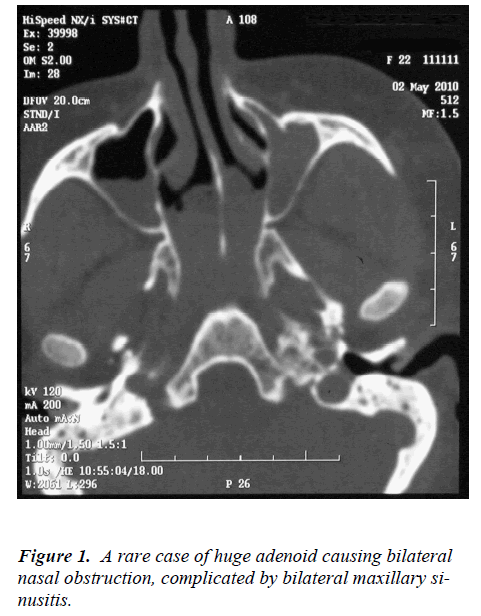 The patient was taken to the operating room. Under general anesthesia, adenoidectomy was performed. The tissue was sent for histopathology which revealed to be adenoidtissue, compound lymphoepithelial inflammatory nasopharyngeal adenoid. Immediately after the surgery, the patient’s symptoms were completely relieved.

The adenoids may cause nasal obstruction, hyponasal speech, snoring, mouth breathing, and nasal discharge. Adenoidectomy is helpful in relieving all these symptoms [3].

Under general anesthesia, adenoidectomy is carried out with an orotracheal tube in position, using adenotomes, curettes and suction diathermy with or without the help of nasal endoscopes. The mouth is held open using a gag. The adenoid is removed by a curette and the bleeding controlled by cause for few minutes.

Although the cause of adenoid hypertrophy could not be exactly discovered in this case, but certain reasons can be proposed. Regressed adenoidal tissue may re-proliferate in response to infections and irritants [6].

Finkelstein et al. [7] reported the presence of obstructive adenoids in 30% of heavy smokers. However, this has been excluded as a reason for adenoid hypertrophy in our case.

In conclusion, though adenoid hypertrophy is rare among adults, rhinologists should not miss the diagnosis by adequately examining the nasopharynx of cases with nasal obstruction.

I would like to express my thank to Dr. Ossama Mostafa of the Dept. of Family & Community Medicine, College of Medicine, King Khalid University, Abha, for his great help in reviewing this manuscript.