Neurons exposed to Aβ will be apoptotic in Alzheimer's disease (AD) brains or in vitro. The aim of the current study is to explore the neuroprotective mechanism that 7,8-dithydroxycoumarin inhibits JNK and p38MAPK-mediated Aβ-induced neurotoxicity. In vitro cultures of SH-SY5Y human neuroblastoma cell lines were treated with 7,8-dithydroxycoumarin (0, 1, 5 and 10 μmol/L) for 1.5 h, subsequently treated with 25 μmol/L Aβ25-35 fibrils. The MTT method was used to detect cell proliferation, and fluorescence probe H2DCF-DA was used to determine intracellular reactive oxygen species (ROS) content. Western-blot assay was performed to detect the JNK and P38MAPK phosphorylation. 25 μmol/L Aβ25-35 fibrils suppressed cell growth. They increased intracellular ROS, and enhanced levels of JNK and P38MAPK phosphorylation in a time-dependent manner. 7,8-dithydroxycoumarin treatment improved cell proliferation, reduced ROS generation and down-regulated levels of JNK and p38MAPK phosphorylation in a concentration-dependent manner. 7,8-dithydroxycoumarin may inhibit Aβ-induced neurotoxic injury through suppressing ROS, JNK and p38MAPK pathways. The finding of the current study is conducive to protecting neurons in AD by using 7,8-dithydroxycoumarin.

Alzheimer's disease (AD) is a neurodegenerative disorder with features of senile plaques, neurofibrillary tangles, and neuronal loss [1,2]. Aβ accumulation plays a determining role in AD by inducing the apoptosis of neurons [3-6]. The intracellular mechanisms by which Aβ triggers neuronal apoptosis involve oxidative stress [4,5], c-Jun N-terminal kinase(JNK) pathway and p38MAPK pathway [3-7]. How to prevent AD or attenuate disease progression is always a challenge [8-11].

7,8-dithydroxycoumarin (Daphnetin) is extracted from Daphne Korean Nakai and its chemical structure is shown in figure 1. It is a white or off-white, odourless, tasteless powder, and is sparingly soluble in methanol, slightly soluble in ethanol and insoluble in water. After absorption, 7,8-dithydroxycoumarin is widely distributed in body, and it is predominantly in kidney, also in lung, spleen and plasma [12,13]. Studies suggest that it can protect cardiovascular system, inhibit central nervous system and can pass through the blood brain barrier [12]. Upon its function in the brain, GAP-43 expression in ischemic hemisphere striatum and cortex is gradually increased after cerebral ischemia-reperfusion with 7,8-dithydroxycoumarin in rats, and GAP-43 content in the whole ischemic hemisphere is increased to different extents [14]. Studies have suggested that 7,8-dithydroxycoumarin and coumarin derivatives can elevate expression of nerve growth factors(NGFs), promote proliferation of Schwann cells, protect neurons against damage, and accelerate regeneration of injured peripheral nerves [14-19]. In addition, coumarins are found to have antioxidant effects scavenging ROS [20]. Daphnetins can induce differentiation of human renal carcinoma cells by suppressing p38MAPK [21]. We asked might 7,8- dithydroxycoumarin protect neurons against Aβ-induced neurotoxic injury by suppressing ROS and MAPK? 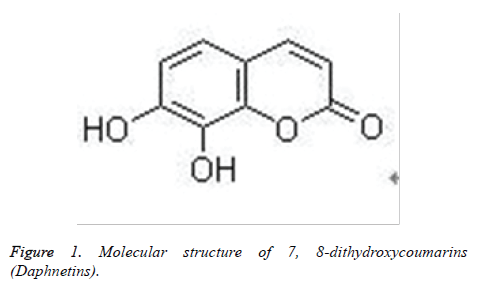 The current study is designed to investigate whether 7,8- dithydroxycoumarin inhibits Aβ25-35-induced neurotoxic injury through suppressing the JNK and p38MAPK pathways.

SH-SY5Y human neuroblastoma cell lines were donated by Experimental Center of Jilin University Medical School. Cells were cultured in DMEM medium (containing penicillin of 100 IU/ml and streptomycin of 100 IU/ml) with 10% fetal bovine serum at 37°C under the condition of 5% CO2. In experiments, SH-SY5Y cells were inoculated into 96-well plates at a density of 1×105 per well (200 μl medium per well) or 6-well plates at a density of 1×106 per well (2 ml per well) and incubated overnight. Then 7,8-dithydroxycoumarin (Daphnetins) shown in figure 1 at final concentrations of 0, 1, 5, 10 μmol/l were added to cells and incubated for 1.5 h. Subsequently cells were treated with 25 μmol/l Aβ25-35 fibrils.

The MTT method was performed to assay the viability of SHSY5Y cells. Briefly, 20 μl (5 mg/ml) MTT was added in each well of 96-well plates, and the cells were incubated at 37°C for 4 h. After adding 150 μl DMSO, the mixture was oscillated for 8 min. After purple crystals were fully dissolved, optical density (OD) values of each well was measured by the microplate reader. Cell viability was calculated by dividing normal control OD.

H2DCF-DA is a new generation of ROS trapping agent. It can rapidly cross over cell membrane to enter cells and de-esterify under the effect of lactonase, generating nonluminous DCFH. When ROS such as H2O2, O2- and OH are present in cells, it is immediately oxidized into fluorescigenic 2’,7’- dichlorodihydrofluorescein (DCF). At this time, it is feasible to determine the fluorescence intensity of intracellular DCF by flow cytometer or fluorescence microplate reader, namely conduct in situ real-time detection of intracellular ROS on the basis of single cell. Therefore, to change extent of intracellular free radicals can be directly detected by the fluorescence intensity. In this study, intracellular ROS was determined by the fluorescence probe H2DCF-DA staining method. H2DCFDA was dissolved in DMSO. As staining, it was diluted with the medium to the working concentration. Cells in 96-well plates were incubated with fluorescence probe H2DCF-DA and incubated at 37°C for 15 min. Subsequently, the cells were washed with PBS for three times and detected using the fluorescence microplate reader. Fluorescent density percentage of cells was calculated by dividing normal control fluorescent density.

The RIPA cell lysis solution was added for cell lysis to extract proteins. After 10% SDS-PAGE electrophoresis, the proteins were electroblot to PDVF film and immersed in first antibodies (diluted by the ratio of 1:1000 in PBS containing 1% BSA) overnight at 4°C. The membranes were washed with 0.01 mol/l PBS for 4 times, 5 min each time, and then immersed in the second antibody goat anti-mouse IgG (1:10,000 diluted) at room temperature for 1 h. Afterwards, membranes were washed with 0.01 mol/l PBST, and color development was conducted according to the instructions of DAB chromogenic reagent kit. Band scanning and image analysis using ImageJ software [22] were carried out. Levels of phosphorylated JNK and p38MAPK were normalized on total JNK and p38MAPK, respectively.

Fibrillar form of Aβ25-35 peptides can be used to mimic the effects of the Aβ1-40 fibrils, and 25 μmol/l Aβ25-35 fibrils can effectively induce the apoptosis of primary cultured rat cortical neurons [3]. Hereby, 25 μmol/l Aβ25-35 were selected in the current study to induce the injury of SH-SY5Y neuroblastoma cells. Previous study has suggested that the concentrations of 7,8-dithydroxycoumarins (Daphnetins) ranging from 2 to 8 μmol/L can promote neurite outgrowth and prolong neuronal survival time in primary cultured rat cortical neurons [15]. By referenced to this literature [15], the current study selected 1,5,10 μmol/L Daphnetins for use. Effects of Aβ25-35 fibrils and 7,8-dithydroxycoumarins (Daphnetins) on SH-SY5Y cell viability were determined using the MTT assay. After treated with Daphnetins (0, 1, 5 and 10 μmol/L) for 1.5 h, the cells were treated with 25 μmol/l Aβ25-35 fibrils. The results of MTT assay showed that Aβ25-35 remarkably reduced cell viability in a time-dependent manner (See Figure 2A). Aβ25-35-induced cell death was significantly inhibited by Daphnetins in a concentration-dependent manner, in particular 5 and 10 μmol/l Daphnetins (P <0.05 (Figure 2B). 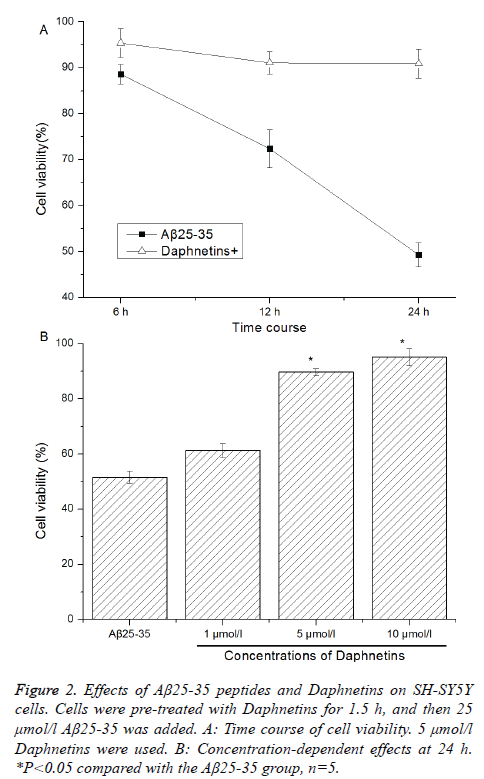 The mechanisms that Aβ peptides induce neuronal injury and death involve oxidative stress. Fluorescence probe H2DCF-DA was used to detect the aggregation of intracellular ROS. After entering cells, H2DCF-DA was oxygenolysed by intracellular peroxide and hydroperoxide into fluorescent dichlorofluorescein (DCF), and its fluorescence intensity was linear correlation to produced ROS concentration. For SHSY5Y cells exposed to 25 μmol/l Aβ25-35 fibrils, their fluorescence intensity was significantly increased in a timedependent manner (See Figure 3A). Daphnetins pretreatment markedly reduced the Aβ25-35-induced intracellular ROS generation in a concentration-dependent manner (Figure 3B). Daphnetins could inhibit or clean Aβ25-35-induced ROS generation. 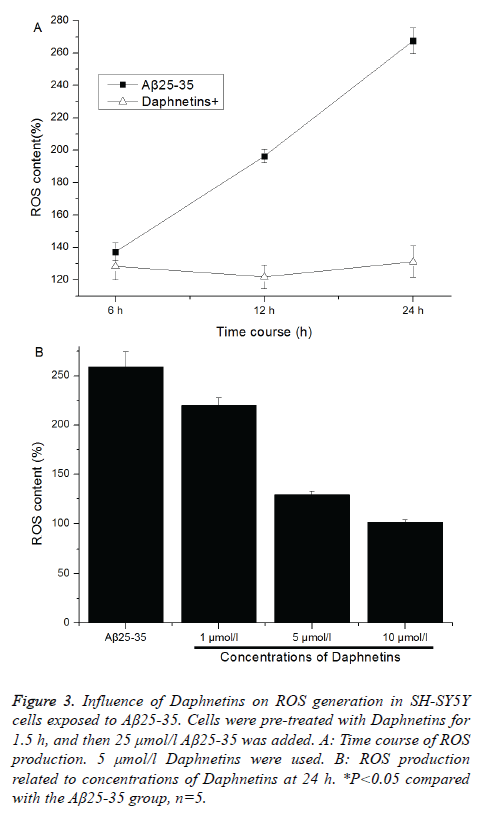 Figure 3: Influence of Daphnetins on ROS generation in SH-SY5Y cells exposed to Aβ25-35. Cells were pre-treated with Daphnetins for 1.5 h, and then 25 μmol/l Aβ25-35 was added. A: Time course of ROS production. 5 μmol/l Daphnetins were used. B: ROS production related to concentrations of Daphnetins at 24 h. *P<0.05 compared with the Aβ25-35 group, n=5.

Levels of JNK and p38MAPK phosphorylation induced by Aβ25-35 fibrils 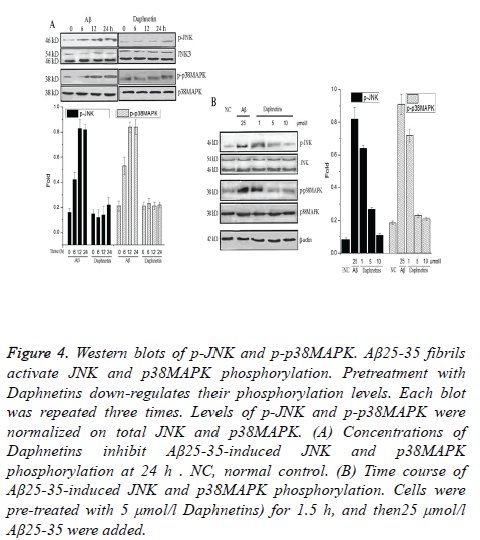 Aggregation of Aβ in the specific brain region mediates the oxidative stress (OS) damage to neurons. This plays an determining role in the pathogenesis and progression of AD [1-6,23]. Aβ can induce OS in vivo and in vitro, and OS may increase the generation and aggregation of Aβ. Such vicious cycles are formed between OS and Aβ, promoting AD occurrence [1-6]. Considering the important role of OS in AD, the anti-OS treatment strategy is an effective treatment approach for occurrence and development of AD. Therefore, a broad-prospect method for prevention and treatment of AD may be weakening or inhibiting Aβ-induced OS damage.

In the current study, fibrillar form of Aβ25–35 peptide was used to mimic the neurotoxic effects of Aβ1–40 fibrils, which can induce OS damage in neurons via multiple pathways. And 25 μmol/l Aβ25-35 fibrils that have been reported to effectively induce the apoptosis of primary cultured rat cortical neurons within 24 h [3] were selected to induce the injury of SH-SY5Y neuroblastoma cells. 7,8-dithydroxycoumarin was expected to inhibit the Aβ25-35-induced neurotoxic injury via suppressing oxidative damage or other signaling pathways as referenced to the literatures [20,21]. The concentrations of 1, 5, 10 μmol/L Daphnetins were selected for use in the current study by referenced to the literature that have been reported 7,8-dithydroxycoumarins ranging from 2 to 8 μmol/L can promote neurite outgrowth and prolong neuronal survival time in primary cultured rat cortical neurons [15].

OS is the main inductive substance activating the MAPK pathways [21]. The activation of JNK and p38MAPK is associated with neurotoxic damage, and Aβ can activate these two kinases to induce neurotoxic injury [1-6,23]. The results in the current study demonstrated that Aβ25-35 enhanced JNK and p38MAPK phosphorylation with respect to elevated ROS production in SH-SY5Y neuroblasoma cells. 7,8- dithydroxycoumarin reduced the Aβ25-35-induced JNK and p38MAPK activation (Figure 4A and 4B) in a concentration dependent manner. The MAPK pathways are essential to Aβ- induced neurotoxic apoptosis [3]. Down-regulation of JNK and p38MAPK phosphorylation in the current study would attenuate the Aβ-induced OS damage on neurons. These results suggested that 7,8-dithydroxycoumarin inhibited Aβ25-35- induced neurotoxic damage through suppressing JNK and p38MAPK activation.

Although 7,8-dithydroxycoumarin is promising to be applied to AD in vitro, homologous coumarins have a strong anticoagulant effect. This pharmacological effect may pose some problems to its use in vivo. Therefore, animal experiments should be carefully performed for assessing the pharmacological effect of 7,8-dithydroxycoumarin in vivo. In addition, the neurotoxicity with respect to Aβ1-40 or Aβ1-42, neuron apoptosis, and their interaction with 7,8- dithydroxycoumarin should also be assessed in animal experiments in the future.