Methods: The data of 67 patients who were diagnosed as primary lung cancer and 67 healthy persons in the same period were selected from July 2016 to July 2017. The primary lung cancer patients were grouped into the study group, and the healthy persons were classified as the control group. CT scan was performed on the two groups, respectively, for the characteristics observation records and value analysis.

Conclusion: The application of 64-slice spiral CT in the detection of primary lung cancer can provide more clear and comprehensive diagnostic data for patients.

The scanning instrument is the US GE 64-slice light speed spiral CT scanner, scanning range: From 2-3 cm above the thoracic entrance to the lung bottom. The scanning parameters were set as follows: The conventional thickness was 5mm, its reformation thickness was 0.625 mm, its pitch was 0.984:1, FOV (Field of View) was 50 cm, the tube voltage was 120 kV, the current was 250 mAs, and the contrast agent was 75 ml of the Non-ionic contrast agent Youwei. The high-pressure type syringe was used, and the injection speed was controlled at 3.5 ml/s. The sweep time was 10 s, and the delay was 30 s. The scanned images were reconstructed by thin slices for VR (Volume Reconstruction), MIP (Maximum Density Projection), MPR (Multiplanar Reconstruction), etc., and then the treatment of BA and pulmonary artery was carried out, and the examination results were analysed and observed by multi-angle rotation and cutting.

The morphological characteristics of primary lung cancer tumors in the blood supply arteries were observed and recorded. An artery that starts from systemic circulation, through the root of porta pulmonis to lung bronchus was determined as a BA. Each BA was identified as one BA after entering the root of porta pulmonis. BA diameter evaluation: Dilation with the transverse diameter of more than 2 mm.

Display of lung cancer in the BA

Table 1: Comparison of postoperative rehabilitation of patients between two groups.

The BA manifestations of primary lung cancer were interlaced, tortuous and intermittent, and the associated pulmonary artery was wrapped around, with a residual root shape, narrowing by invasion or truncation. The BA in the control group showed that the right BA went to the right wall of the aorta from the T5 horizontally, with a BA diameter of about 1.38 mm. In the study group, 63 cases of BA were displayed clearly, and 46 cases of them could clearly show the cross of the lump in BA and the formation of tumor vessels.

A patient, female, small cell cancer in the dorsal segment of the right lower lung and multiple pulmonary metastasis (Figure 1). 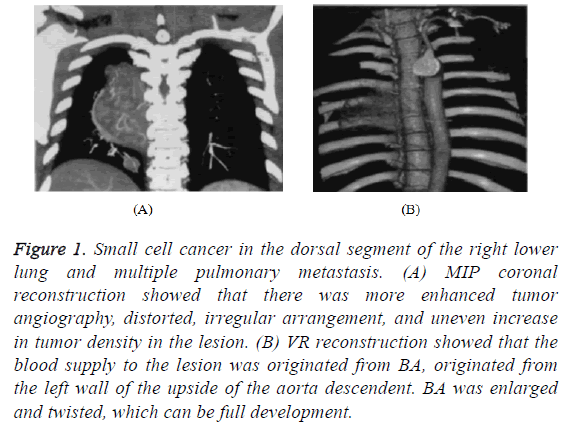 Figure 1: Small cell cancer in the dorsal segment of the right lower lung and multiple pulmonary metastasis. (A) MIP coronal reconstruction showed that there was more enhanced tumor angiography, distorted, irregular arrangement, and uneven increase in tumor density in the lesion. (B) VR reconstruction showed that the blood supply to the lesion was originated from BA, originated from the left wall of the upside of the aorta descendent. BA was enlarged and twisted, which can be full development. 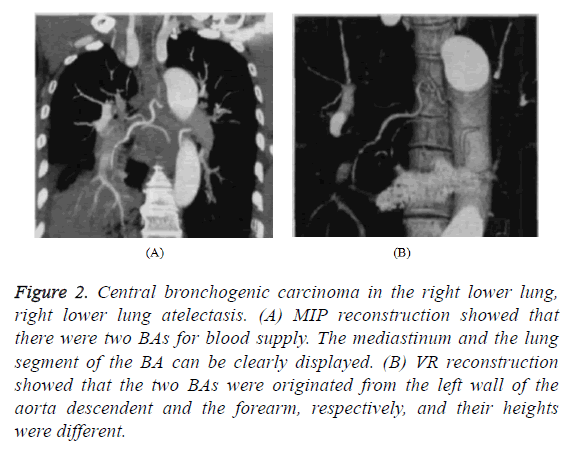 Figure 2: Central bronchogenic carcinoma in the right lower lung, right lower lung atelectasis. (A) MIP reconstruction showed that there were two BAs for blood supply. The mediastinum and the lung segment of the BA can be clearly displayed. (B) VR reconstruction showed that the two BAs were originated from the left wall of the aorta descendent and the forearm, respectively, and their heights were different.

As time goes by, the incidence of lung cancer in China is gradually increasing, and now the incidence of lung cancer in men accounted for the main part, and in women, it is also increasing, causing serious economic burden on people as well as serious threat to the health of patients [4,5]. Therefore, the implementation of its early diagnosis and treatment is significant for patients, and diagnostic tools in the inspection play an important role. With the continuous progress of medical imaging, the main tools for examination of lung cancer are CY ray, X-ray, MRI, etc. MRI is a multi-plane to show the structure of the mediastinal anatomy, but its specificity is relatively low, and it is expensive; X-ray is the most commonly used diagnostic tool for lung cancer examination, but the misdiagnosis rate is relatively high; CT is a noninvasive examination of the highest value in the diagnosis and staging of lung cancer [6-10].

In this study, the display number of cases in the left and right BA of the study group was higher than that in the control group, and the total display number of AB was more in the study group. The display rate of AB was 94.03% (63/67) in the study group, which was higher than the control group (74.63%) (50/67). The results were similar with that of Chen [11]. The reason for this is that the concentration and amount of contrast agent will affect the display quality of the image. In this study, the traditional fixed-time scanning method was used. The delayed sweeping time was 30s, and the CT value in the BA beginning part reached 300 Hu or so, of which 67 cases, only 4 cases were not shown. According to the study, both the BA diameter of the right lung and that of the left lung in the study group were larger than that in the control group. The BA diameter of the right lung was 2.67 ± 0.63 mm in the study group, larger than that in the control group. The results were similar with that of Gao et al. [12]. The reason for this is that the injection rate of contrast agent was set to 3.5 ml/s in this study, and hence the size of BA diameter was similar with that of related literature. Meanwhile, the influence factors of the other aspects on the imaging were the individual aspects of the patients, including nervousness, cough, and involuntary movement of breathing. Therefore, there were artifacts from heart movement, contrast agent in the superior vena cava and contrast agent in the adjacent pulmonary artery; there was a correlation with the concentration of contrast agents. This study used 300 mg/ml concentration of non-ionic contrast agent, which could clearly show BA small blood vessels. In the CAT image processing technology, continuous observations were made to the axial thin slice images of the BAs. First, the origins of BA openings were found. As BA blood vessels were slim, whose diameters were about 2 mm. Therefore, the axial thin slice images of the BAs in the lung segment and mediastinum were not clear. However, after post-processing of the images by real-time VR, MPR and MIP, the whole view of the blood vessels can be observed from any angle of view. When the BA diameter was measured in this study, it is found that the related BAs will be significantly larger, and the branches will increase when the lung cancer occurs. The main manifestations of tumor blood vessels were blood paste, reticular, spotted and earthworm-like staining. The blood vessels were not tapering from near to far, but their sizes varied greatly. The distal ends of the blood vessels were relatively larger than the proximal ends when observed in a certain range, which was opposite to the normal blood vessels. At present, some scholars [13-15] consider that BA is the main blood supply artery of lung cancer. Therefore, the preoperative imaging of BA in the CTA can provide important information for patients to receive more targeted treatment. In this way, the use of radiation dose is substantially reduced; meanwhile, the operation time can be shortened, and the success rate of BA intubation can be comprehensively increased. The number of samples taken from this study was limited, and the results were further studied.

In summary, the 64-slice spiral CT angiography can provide clear morphological characteristics of BAs that supply blood for lung cancer and provide reliable information for early treatment of patients.