Face perception is an important skill in primates. Neuropsychological [1,2], neurophysiological [3], and functional neuroimaging [4-6] studies have demonstrated the existence of specialized brain areas for face processing. Face perception is accomplished through several distinct face processing stages. Face detection requires information about the basic spatial relationship between features of faces, for example, two eyes above a nose and the nose above a mouth [7]. Discriminating between individual faces requires more complex information such as subtle differences in the contour of faces, facial features, and spacing of the features [8].

The present study used differential Pavlovian conditioning to measure the time course of face processing. Differential eyeblink conditioning was observed even in participants who showed no conscious awareness of the link between the conditioned stimulus (CS) and the unconditioned stimulus (UCS) [11,12]. Pavlovian conditioning is mediated by a low-level learning mechanism. Conditioned responses (CRs) are initiated without intention and may be unaffected by changes in observer’s criteria. By using differential eyeblink conditioning, tilt aftereffects were shown to occur in the spatiotopic reference frame, which are very weak and likely to be susceptible to decisional biases [13]. Measurement with Pavlovian conditioning would presumably observe pure sensory processing that occurs prior to decisionmaking. Typically, psychophysical measurements depend on the participant’s subjective judgments and cause subjective biases. Conditioning may be able to measure perceptual processing more objectively and sensitively than psychophysical measurements.

Twelve participants (21–27 years old, 6 females and 6 males) took part in Experiment 1. All participants had normal or corrected-to-normal vision, and were naive to the purpose of the experiment. The experiment was performed in accordance with the Declaration of Helsinki, and informed consent was obtained from all participants. 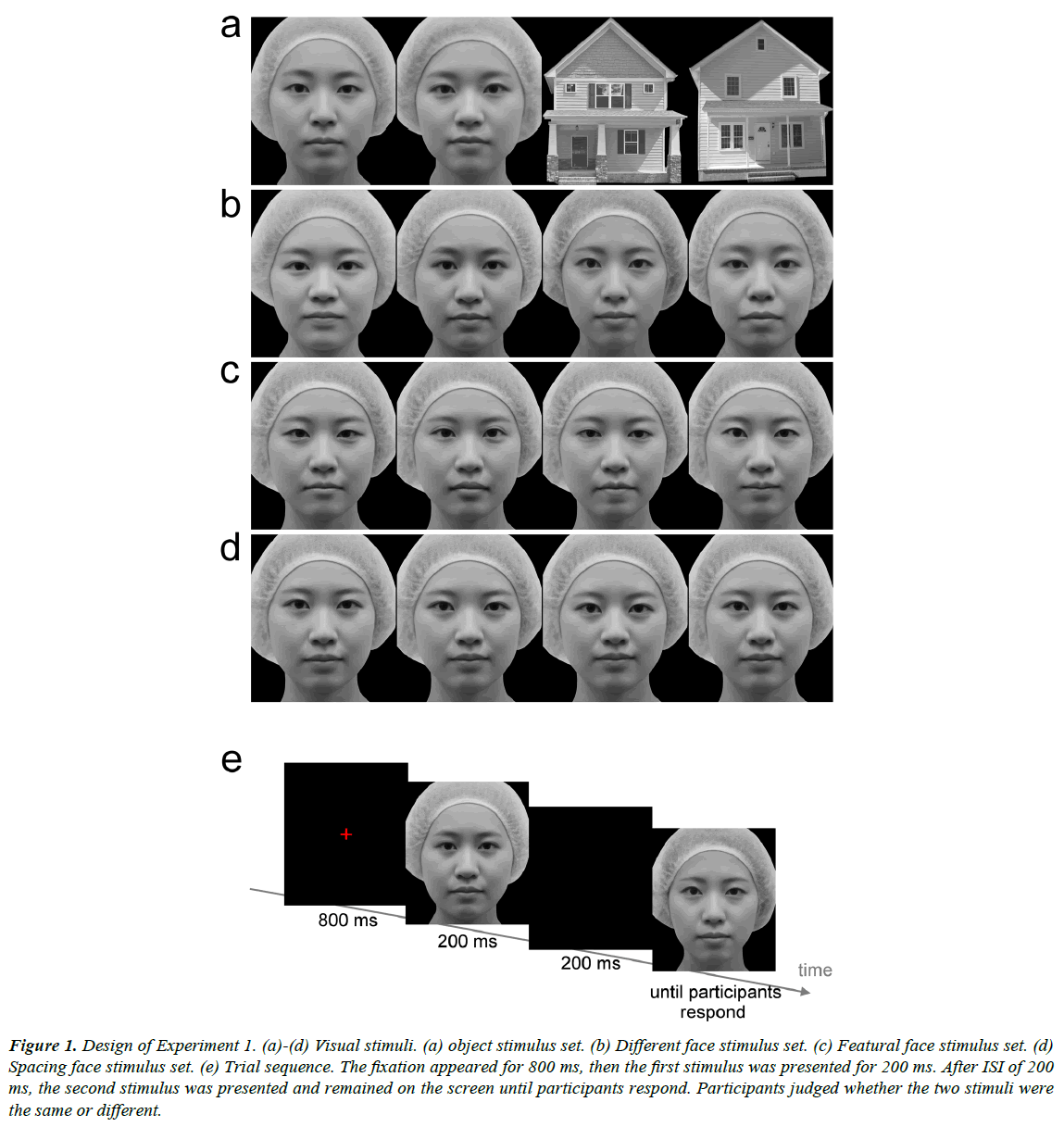 Accuracy was measured as the proportion of the correct responses for both trials in which the two sequential stimuli were the same and different (Figure 2b). Accuracy for the discrimination task between a face and a non-face object was almost 100%. Accuracy in the three tasks for discrimination between individual faces was around 80%. Repeated measures ANOVA revealed significant main effect of the stimulus factor (F3,33=13.63, p<0.001). Accuracy in the different, featural, and spacing conditions was not different (different vs. featural: t11=0.24, p=1.0; different vs. spacing: t11=0.88, p=1.0; featural vs. spacing: t11=0.61, p=1.0). Accuracy in the object condition was higher than that in the different (t11=5.86, p=0.0006), featural (t11=5.91, p=0.0006), and spacing (t11=4.08, p=0.007) conditions. The p values were adjusted by the Bonferroni-Holm method for the comparison between the stimulus conditions. 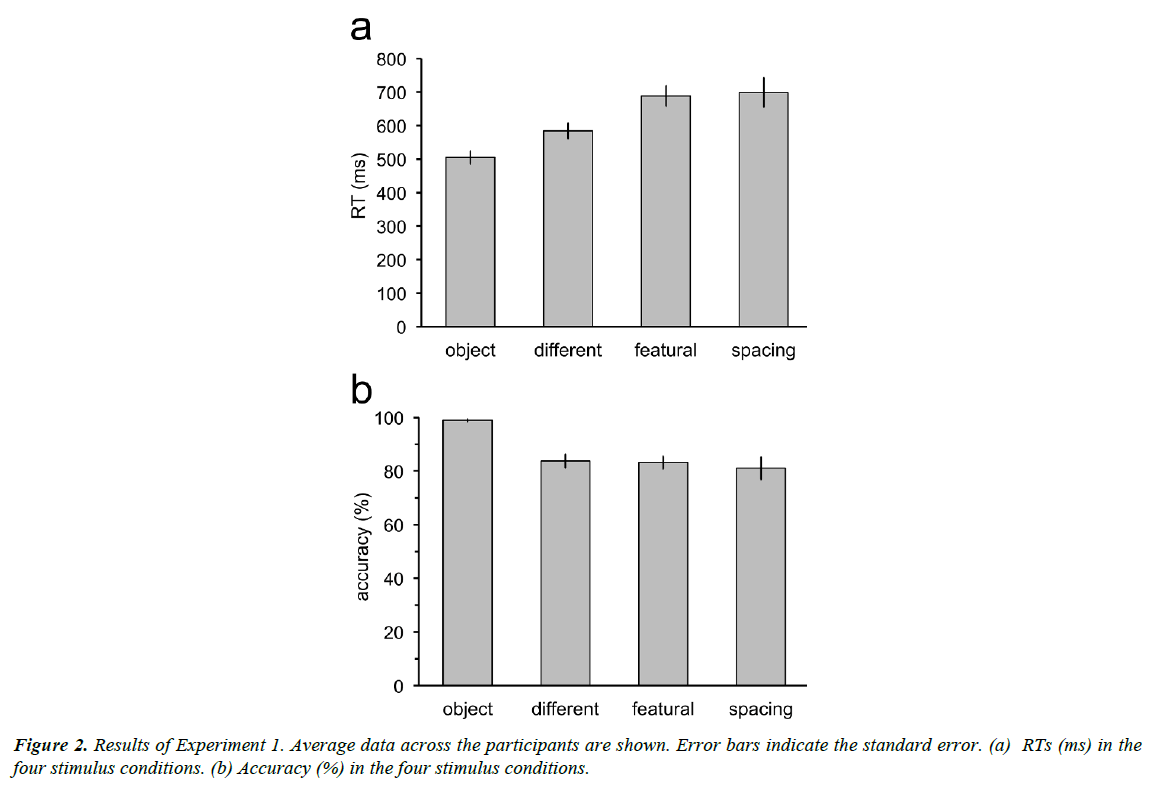 In Experiment 2, we measured discrimination performance by using differential eyeblink conditioning. To examine the time course of face processing, we manipulated stimulus onset asynchrony (SOA) between the CS and the UCS. To compare the time course between the psychophysical and conditioning experiments, we used SOAs that are matched to the RTs for the discrimination tasks in Experiment 1.

A red fixation cross was presented for 1,000-1,500 ms (randomly varied) at the center of the screen, followed by the presentation of a face or house stimulus. One or two of the four stimuli in each stimulus set (CS+) were always followed by the UCS, whereas the other stimuli (CS-) in the set were presented alone. The UCS consisted of a 100-ms, 5-psi air puff, and was delivered to the right eye via flexible plastic tubing terminating in a 1-mm nozzle placed 45° right of the right eye. The distance between the nozzle tip and the cornea was approximately 3 cm. The SOA between the CS+ and the UCS was 500, 600, 700, and 700 ms in the object, different, featural, and spacing conditions, respectively (Figure 3). We used approximately the same duration as RTs for the face discrimination task in Experiment 1. We also tested two other types of SOAs: one was 200 ms shorter than the RT-matched SOA (300, 400, 500, and 500 ms) and the other was 300 ms shorter than the RT-matched SOA (200, 300, 400, and 400 ms).

The CS and the UCS terminated simultaneously. The inter-trial interval (ITI) varied randomly in the range of 4 to 7 s. The color of the fixation cross was often red (x=0.63 and y=0.35 in the CIE chromaticity coordinates), but a fixation of bluish red color (17.7 cd/m2; x=0.36 and y=0.20) was presented with a 25% probability. Participants were instructed to press a button when the bluish red fixation appeared in order to make sure that they fixate the center of the screen.

Eye blinks were recorded using pairs of electromyographic (EMG) electrodes (4 mm Ag-AgCl). The electrodes were placed on the orbicularis palpebrarum muscle below each eye with the ground and reference electrodes on the earlobes. EMG data were recorded at 1 kHz. An eyeblink occurring from 200 ms before UCS onset to UCS onset, the amplitude of which was equal to or greater than 10% of the average amplitude in response to the UCS presentation in the same session, was counted as an eyeblink conditioned response (CR). To monitor the eye movements, electrooculography (EOG) was also measured with two electrodes placed near the outer canthi of both eyes. Trials in which participants made eye movements while the stimuli appeared were rejected.

Participants underwent another 12 sessions (four stimulus conditions × three SOA conditions). The sessions were tested in a random order between participants. Each session consisted of four blocks and each block included six CS+ and six CS− trials. In all three conditions (different, featural and spacing), an image of the CS+ was presented six times in the six CS+ trials, while the other three images were presented two times in the six CS− trials. Trials were presented randomly, with no more than two trials of the same type in a row. A different image was assigned to the CS+ between participants and was counterbalanced. In the object condition, the two face images were used as the CS+ and the two house images were used as the CS− in half of the participants. In the remaining half, the CS+ and the CS− were reversed. The two types of face images or house images were presented randomly in each block. 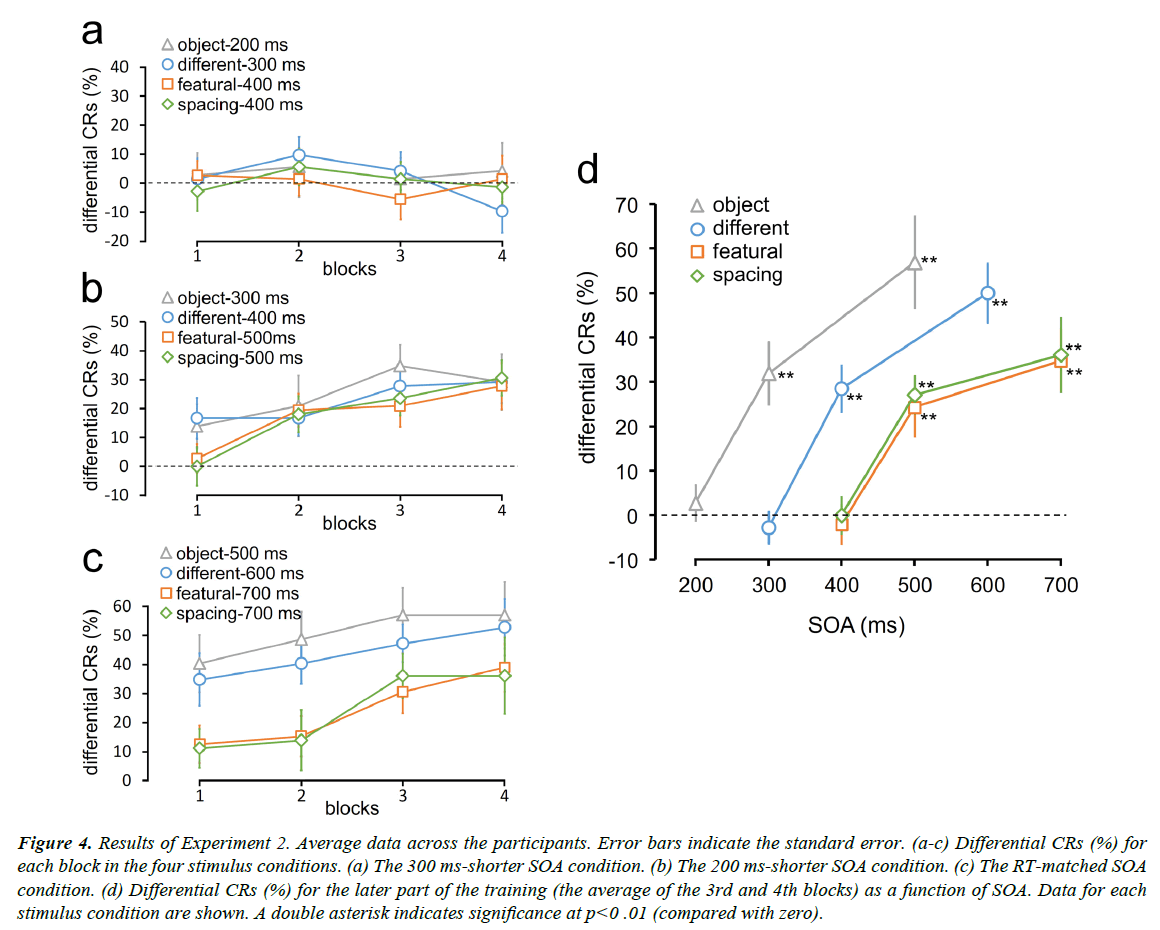 Figure 4: Results of Experiment 2. Average data across the participants. Error bars indicate the standard error. (a-c) Differential CRs (%) for each block in the four stimulus conditions. (a) The 300 ms-shorter SOA condition. (b) The 200 ms-shorter SOA condition. (c) The RT-matched SOA condition. (d) Differential CRs (%) for the later part of the training (the average of the 3rd and 4th blocks) as a function of SOA. Data for each stimulus condition are shown. A double asterisk indicates significance at p<0 .01 (compared with zero).

In Experiment 3, the discrimination tasks were conducted by using the psychophysical measurement again. To examine whether participants can perform the discrimination tasks within the duration in which they could acquire differential conditioning when using the conditioning measurement in Experiment 2, we instructed participants to judge with time constraints. 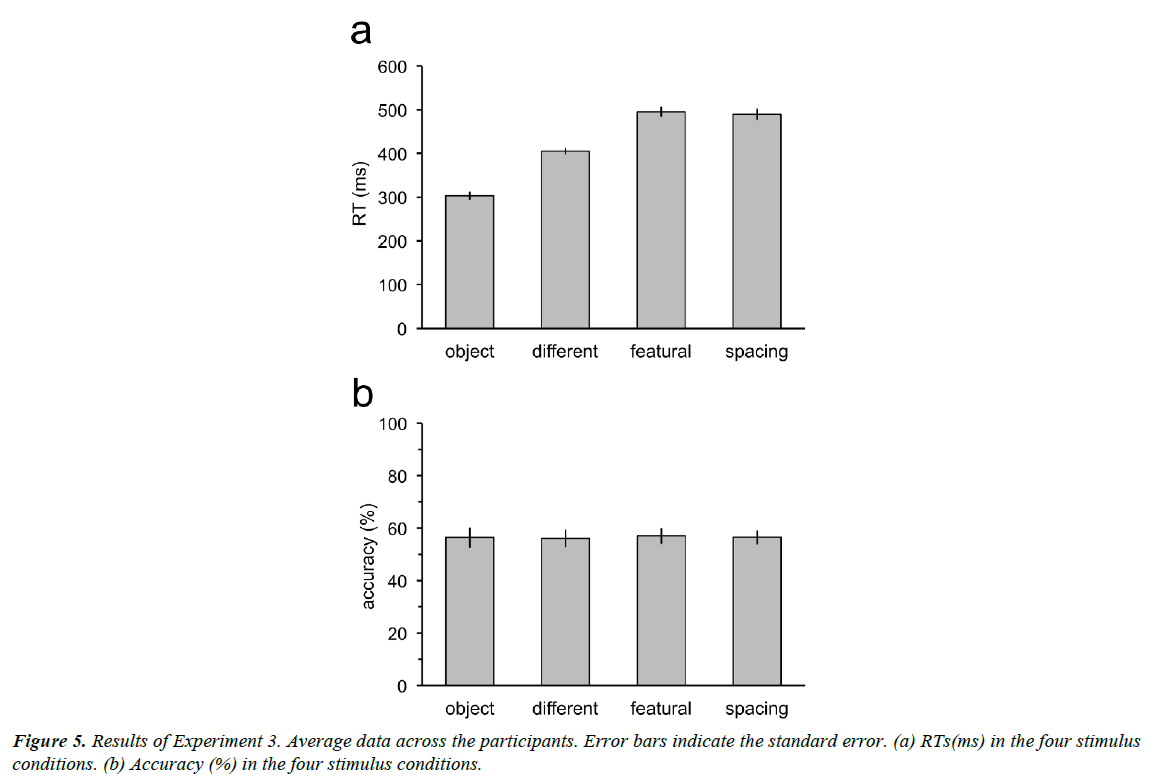 The hierarchy and the functional stream of visual processing have been greatly revealed by measuring neural activities. Cortical location and time course of neural correlates are critical evidence to elucidate detailed mechanism of the visual hierarchy. However, the visual input is processed not only by feed-forward projections, but also by feedback projections [16,20]. Sensory signals are unlikely to flow sequentially through the serial pathway, but rather flow in a complex recurrent network. As a consequence, there arises difficulty in estimating the hierarchy of visual functions only by examining the cortical location of neural correlates. Measuring the latency of neural activities is also insufficient because the observed activities might not reflect completion of processing but an intermediate stage. Moreover, the visual response latency of the cortical neurons is broadly distributed and largely overlaps between different visual areas [21]. Recurrent processing has been reported to be involved in several functions of visual perception [22-28]. Face recognition is also involved in feedback projections. Several face patches in the temporal cortex of monkeys are anatomically connected to each other and higher areas provide feedback projections to lower areas [29]. These previous findings suggest that behavioral responses also need to be examined for understanding the hierarchical mechanism of the visual pathway.

In psychophysics, the time course of visual processing is investigated by manipulating the exposure duration of stimuli, in which a stimulus is followed by a mask to cut off processing of the stimulus [14,15]. This paradigm assumes that the masked stimulus is not processed in any subsequent stages. However, masks do not catch up with initial activities of feed-forward responses. Short responses are evoked by the stimulus in the lowlevel [17] and high-level [18,19] visual areas after presentation of the mask. Therefore, a method that manipulates the exposure duration by masks is not sufficient to measure the time course of processing appropriately. The present study measured the time course of face processing by manipulating SOA between the CS and the UCS in Pavlovian conditioning. In our method, visual processing at the time when the UCS is presented might be observed.

The hierarchical order of face detection and individual face discrimination are demonstrated by the time course of neural activities. Studies that measured single unit activity in the temporal visual cortex of monkeys [9] and MEG responses in the occipito-temporal cortex [10] have shown that face categorization or detection is represented in the earliest part of the responses, whereas facial identity is represented in the latter part. The present study showed that successful differential conditioning for discrimination between a face and a non-face object was achieved when SOA between the CS and the UCS was longer than 300 ms. In contrast, for the discrimination between individual faces, differential conditioning was successfully achieved when SOA was longer than 400 ms. These results are consistent with the findings that face detection is mediated at an earlier processing stage than individual face discrimination.

This work was supported by JSPS KAKENHI Grant Numbers JP16H07284.