Three Coins in Esophagus, at the Same Locaton and Same Alignment Ã¢ÂÂ A Very Rare Occurrence

Introducton: Foreign body ingestons are common in paediatric age group. Coin is one of the most commonly ingested foreign bodies in children. Multple coin swallowing is not very common and only a few cases have been reported. A case of multple coin ingeston with perfect radiological alignment is phenomenally rare.
Case Report: We present an interestng case of triple coin ingeston by a 10 yr old child with no known prior history.
Conclusion: Till now there has been no case of three coins aligned similarly at the same level in the literature. This case is being reported due to its rarity being the frst case tll date.

Coins and pins are the most commonly ingested foreign bodies (4) and are most likely to become lodged in the stomach (60%), followed by oesophagus (20%), oropharynx and intestines (10%). Batteries, bones (fish and chicken) and jewellery are the other commonly ingested items. A tracheobronchial foreign body is occasionally seen in adults and is mostly localized in the right bronchial tree. Flat objects like coin are most commonly held at the cricopharyngeal sphincter. Obtaining a good history plays a vital role in effectively diagnosing a foreign body. Radiographs are done to show the presence and location of a radio-opaque foreign body. Radiolucent foreign bodies can be diagnosed on fluoroscopy.

A 10 years old girl presented to the emergency with chief complaint of dysphagia. History of accidental coin ingestion 14 hours before admission was there. Patient was not having any respiratory distress or any other complaints. The history was given by her father but history of multiple coin ingestion was not known. There was no previous episode of coin ingestion by the child according to father’s history.

On examination, patient’s general condition was fair with no history of cough or respiratory distress. A plain X-ray neck and chest with antero posterior view showed a round radio-opaque shadow at the level of cricopharynx (Figure 1). No other shadow was seen in the rest of oesophagus and stomach. 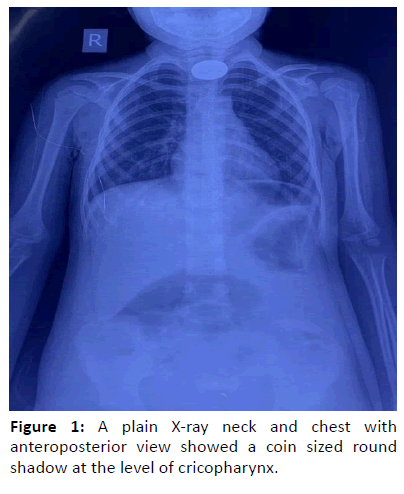 Figure 1. A plain X-ray neck and chest with anteroposterior view showed a coin sized round shadow at the level of cricopharynx.

The patient was planned for esophagoscopic removal of foreign body under general anaesthesia. On esophagoscopy, there were three coins stuck to each other and lodged just above the cricopharynx. The three coins were removed successfully by grasping forceps without causing any injury, check esophagoscopy was done till the gastroesophageal sphincter and it was found to be normal.On post op day 1-Xray neck and chest was done which was normal (Figure 2). 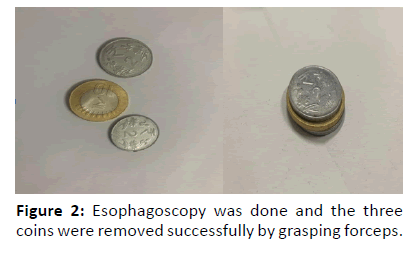 Figure 2. Esophagoscopy was done and the three coins were removed successfully by grasping forceps.

The ingestion of foreign bodies in the paediatric population presents a great challenge for surgeons. Commonly these events are unwitnessed by parents, leading to an even greater diagnostic challenge. Coins remain the most commonly ingested foreign body in children [1]. Typically, coins become impacted in the proximal oesophagus at the level of the cricopharyngeus and removal within 24 hr-48 hr is generally recommended [2].

Cases of children swallowing more than one coin remain rare with very few cases reported in the literature. A case of multiple coin ingestion with perfect radiological alignment is phenomenally rare and there has been no case of triple coin ingestion with same alignment reported in the literature [3]. A foreign body once ingested can cause varying symptoms from initial choking and local discomfort to dysphagia and respiratory distress and oesophageal perforation [4]. Long-term sequelae include formation of an oesophageal structure [5] or tracheo-oesophageal fistula [6].

Various techniques can be used to retrieve an esophageal foreign body such as laryngoscope and Magill forceps, rigid esophagoscopy and flexible endoscopy [7-9].

Coin in the esophagus can be diagnosed on plain radiograph; however it is a challenge to delineate multiple objects such as coins of similar size and shape. Such coins tend to stick together and radiographs often fail to indicate their presence in double dimensional projections. Therefore, a proper history and evaluation of X-rays is required to obtain a clue to multiple foreign bodies.

In our case, all the three coins appear as a circular disc overlapped over each other in the anteroposterior view of X- ray and could not be differentiated as multiple foreign bodies.While doing esophagoscopy we found three coins aligned similarly at the level of cricopharynx. Therefore, an endoscopic visualisation and removal should be considered whenever possible.

Interesting fact about this Case

10 yrs old child presented to us with dysphagia. History of coin ingestion 14 hours back was given by father and there was no history of multiple coin ingestion .Also interestingly when we did the x-ray neck AP view of the patient- we only got 1 opaque shadow at the level of cricopharynx as shown in the figure. So we took the patient for esophagoscopic removal under general anaesthesia. To our surprise 3 coins were stuck to each other with secretions in the same alignment at the same level that is just below cricopharynx, which were removed very cautiously.

The rarity about this case is that till date there is no such case in the literature so far of triple coins ingestion. Very interestingly all these coins were aligned in the same manner and at the same point. And the fact that proper history is not given by attendant, so it is very important to do esophagoscopy very carefully not to miss any multiple coins. 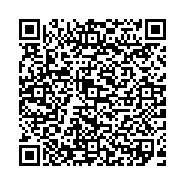