Department of Otolaryngology, University of Florida College of Medicine, USA

Background: The role of bacteria in Chronic Rhinosinusitis (CRS) as an instigator or propagator of the disease is controversial. There has been a great deal of research into the most commonly isolated bacteria in CRS such as Staphylococcus aureus and Pseudomonas aeruginosa, there has however been little research into the less commonly isolated microbial organisms such as Serratia marcescens.

Conclusions: This is the first literature to examine the characteristics of patients with Serratia Marcescens in sinus disease patients to our knowledge. Serratia marcescens infection in the sinuses may be a post surgical disease, and it appears Levofloxacin, Ciprofloxacin, and TMP/SMX are all oral anti-microbials to which Serratia marcescens is consistently susceptible. The extent to which Serratia Marcescens an instigator of recalcitrant disease or a bystander is unclear at this time and warrants further investigation.

Chronic Rhinosinusitis(CRS) is a disease with a massive economical and social impact [1] effecting up to 16% of patients in the united states [2]. Although the relationship between bacteria and this burdensome disease is still poorly understood [2], bacteria does seem to play a role in the disease process. Whether bacteria instigates CRS or enters secondarily and propagates the disease is controversial. There has been a great deal of research into the most commonly isolated bacteria in CRS such as Staphylococcus aureus and Pseudomonas aeruginosa [3], there has however been little research into the less commonly isolated microbial organisms. In our clinical practice we have encountered several patients who present with sinus cultures growing the pathogenic microbe Serratia marcescens.

Serratia marcenens is a gram negative facultative anaerobe classified as a member of enterobacteriacae that has been isolated in hospital-acquired infections for several decades [4]. Known for its red pigmentation, this microbe was first described in 1819 when it was noted to be the cause of an epidemic of Italian polenta turning a blood red color. From the 1800s to the 1970s Serratia marcescens was not believed to be a pathogenic organism. This belief led Serratia marcescens, with its red pigmentation, to be used in experiments throughout the 19th and 20th century as a tracer organism to track the spread of infections [5]. Since the 1970s Serratia marcescens has now been recognized as a pathogen causing meningitis, urinary tract infections, pneumonia, bacteremia, endocarditis, peritonitis, osteomyelitis, and lung abscesses. Given its frequent occurrence in hospital acquired infections Serratia marcescens has been commonly held to be a predominantly nosocomial infection [4,5].

Several studies have been done using genomics to determine the sinus microbiome of both healthy and CRS patients. Among these studies Serratia marcescens was not listed among the common organisms isolated in healthy or CRS patients [6-10]. The goal of this study was to examine the patients from our clinical practice who presented with culture positive Serratia marcescens with respect to clinical characteristics, microbiome, and antimicrobial susceptibilities.

A retrospective chart review of patients treated by the senior author at a tertiary rhinology care institution who demonstrated Serratia marcescens on sinus culture or DNA pyrosequencing analysis of cultures obtained either in clinic or during endoscopic sinus surgery from August 2013 to December 2016 was conducted. Clinic notes, operative reports, microbiology results, and DNA pyrosequencing results were reviewed for presenting symptoms, endoscopic characteristics, interventions, and patient reported outcomes. Approval of the Institutional Review Board of the University of Florida was granted for this review (IRB# 201300621).

Routine cultures were grown and analyzed by the University of Florida Health Shands Hospital microbiology lab. To perform DNA pyrosequencing brush and swab specimens were sent to Pathogenius Laboratory (Lubbock, TX) for processing. Pathogenius is a Clinical Laboratory Improvement Amendments (CLIA) certified laboratory. DNA is extracted from specimens and 16s ribosomal DNA is amplified by polymerase chain reaction (PCR) using universal eubacterial primers.1116s rDNA amplicons were then pyrosequenced. Sequence data was processed and compared against a sequence database with validated microbial sequences at the Pathogenius Laboratory.

Combining the culture sensitivities from all 29 patient’s Serratia marcescens was found to have a 100% sensitivity to Amikacin, Cefepime, Ceftazadime, Ertapenem, Gentamicin, imipenem, and meropenem. Of the orally available antibiotic, serratia had sensitivity to levofloxacin (97%), ciprofloxacin (92%), and Bactrim (97%) Table 1.

Out of the 18 patients treated with either levofloxacin, ciprofloxacin, or bactrim 13 (72%) reported improved symptoms at follow up. For this same group of patients, 7 had repeat cultures following completion of antibiotics. 4 (57%) of these cultures no longer showed Serratia marcescens while 3 (43%) had persistent growth of Serratia marcescens despite appropriate antimicrobial treatment with levofloxacin, ciprofloxacin, or bactrim. 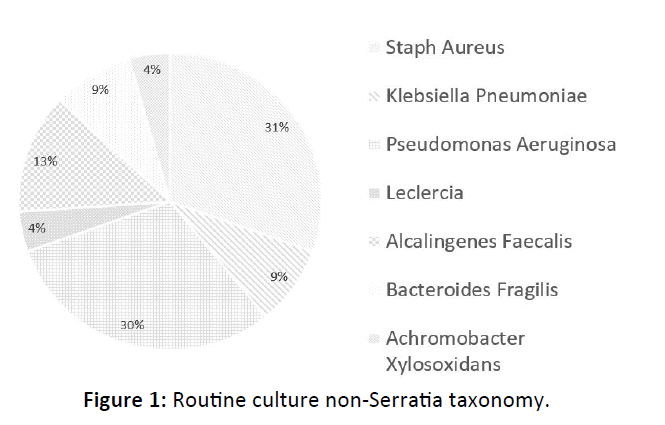 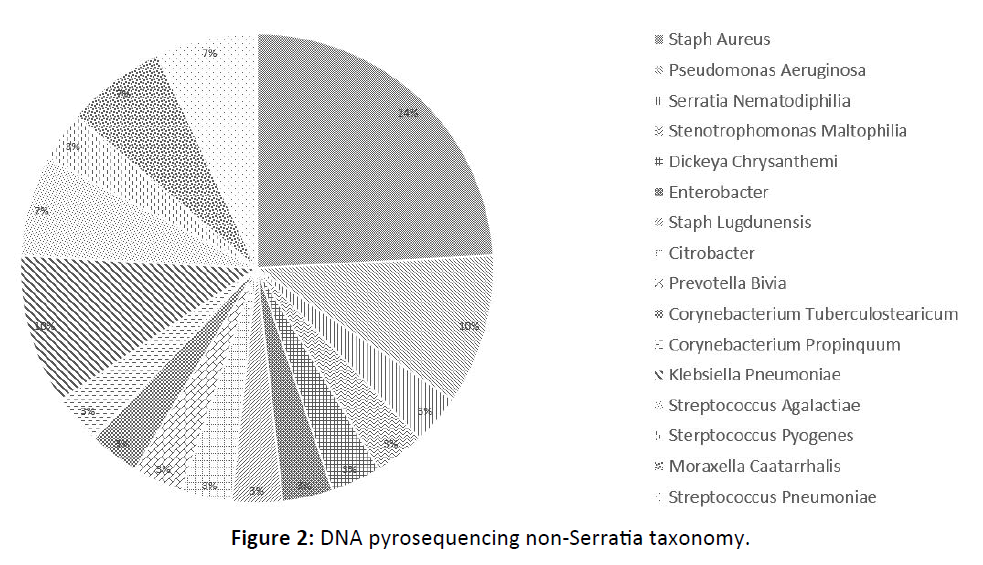 Despite the lack of control group, it is important to highlight the high prevalence of co-morbid asthma in the CRS + Serratia marcescens patients as well as that greater than half (16/29 or 55%) of the patients had polymicrobial infections. This brings up the possibility that Serratia marcescens could play a role in the unified airway, similar to Pseudomonas aeruginosa [15].

The Serratia marcescens culture sensitivities for our patients at the University of Florida seem to support those found in the literature for other types of Serratia marcescens infections (12-14) with susceptibility to fluoroquinolones, trimethoprim-sulfamethoxazile, 3rd and 4th generation cephalosporins, piperacillintazobactam, ticarcillin-clavulanate, aztreonam, and carbapenems.

The high number of polymicrobial infections may be due to increased ability to find non-dominant organisms with DNA testing, and further research into this technique is required. When examining the treatment of Serratia marcescens with appropriate antimicrobials there does not seem to be a difference in symptomatic resolution in polymicrobials vs. unimicrobial infections following treatment. For both the unimicrobial and polymicrobial group there was a non-statistically different response rate (p=0.38) of 44.44% vs. 46.67%.

Similar to other published data Staphylococcus aureus and Pseudomonas aeruginosa were the most common polymicrobial isolates in our series [3]. Given that Staphylococcus Aureus has significant resistance to fluoroquinolones and high susceptibility to bactrim [16,17], Bactrim is likely a better choice in Serratia Marcecens polymicrobial infections with Staphylococcus aureus. This is opposed to Pseudomonas aeruginosa which is not bactrim sensitive but has susceptibility to fluoroquinolones such as ciprofloxacin and levofloxacin [18].

In patients with Serratia Marcecens who were appropriately treated and had follow up cultures 57% did not grow Serratia Marcencens on repeat culture with 43% did have persistent growth following treatment. This phenomenon is possibly explained by Serratia marcescens ability to create biofilms [19]. Although patient’s typically received 14- 21 days of therapy, Serratia marcescens ability to create biofilms may have protected it from being fully eradicated inspite of being susceptible to antimicrobial therapy.

This study certainly has limitations. First, it is retrospective and a small sample size. Secondly, there is no control group. Finally, there is heterogeneity in the culture techniques that were positive Serratia marcescens as well as the treatment regimens. More research into the utility of various culture techniques is needed. No valid conclusions could be drawn with regards to treatment given the variability of the treatments administered. Our goal of this study was to provide an initial characterization of sinus disease patients with Serratia Marscescens cultures.