The influence of improvement in pain and function after total knee replacement in patients satisfaction.

Background: Total knee Replacement (TKR) is successful and reliable in relieving pain and improving joint function. Despite substantial advances in primary TKR, a lot of studies suggest only 82% to 89% of primary TKA patients are satisfied. Methods: The data of 80 patients who underwent primary TKR for late-stage osteoarthritis of the knee between 2010 to 2013 were obtained. The Oxford Knee Scores (OKS) were used to assess the patients before the surgery, and we used 6 questions to assess the patient’s satisfaction after the surgery. Results: Among 80 patients 75 patients (93.8%, P-value <0.001) were satisfied and 5 (6.3%) were unsatisfied in general. Regarding pain, the surgery has shown significant effects in decreasing pain for 73 out of the 80 subjects (91.3%, P-value<0.001). Also, there was a significant improvement in the patient ability to participate in leisure activities 49 out of 80 (61.3%, P-value <0.001), when scores were compared before and after the surgery. Conclusion: Patient satisfaction is an important outcome measure and should be assessed in addition to traditional outcome scores post TKR. In the present study, there is a strong correlation between improvement in pain and functional activity and patient satisfaction.

Total knee replacement (TKR) is one of the most common operations worldwide, and it has proved a success for improving pain and function in patient with arthritis [1,2]. The need for knee replacement is predicted to increase six-fold between 2005 and 2030 to reflect an increasingly elderly yet functionally demanding population [3]. The indications for knee replacement include end stage arthritis, limited mobility and persistent severe pain unrelieved by non-operative treatment [4,5]. Previous studies have shown satisfaction rates of 81% to 89% following TKR [6]. However, up to 20% of patients are not satisfied with their outcome [7,8]. Patient satisfaction is being recognized as an important measure of health care quality [9]. Satisfaction following TKR is multifactorial, and measuring satisfaction can add another valuable dimension to outcomes assessment after Knee replacement. Managing the expectations of the patients may reduce dissatisfaction after such kind of surgery. There are a number of validated scores for measuring outcome following TKR. These focus on pain, function, recreational activity and knee- related quality of life. We think that pain would be a stronger determinant of satisfaction than function as pain is usually the primary indication for knee replacement and the patients have higher expectations of relief from pain when compared with improvements in functional ability after TKR [6]. And it is relatively easy for patients to change their level of activity and their environment so that their functional deficiencies are overcome and usually the functional activities are different between countries and even between different areas of same countries’ as some people having higher demanding life style the other are not. It is now recognized that the rate of success of the patient and the surgeon differs, and there is poor correlation between the two [10]. The goal of this study was to explore the effect of pain and functional improvement in patients satisfaction following knee replacement. We hypothesized that individuals, who experienced less pain and better function level, would show greater satisfaction with their surgery.

Patients who underwent primary TKR for late-stage osteoarthritis of the knee between 2010 to 2013 were included. Patients who had TKR for osteoarthritis, avascular necrosis (AVN), inflammatory, gout or post-traumatic arthritis were included in the study. Patients aged <50 years, those undergoing revision TKR, or who had undergone previous ipsilateral knee surgery, such as ligament reconstruction or osteotomy were excluded. The minimum follow-up period was one year. Information collected by the surgeon at the clinic visit included gender, age, marital status, residence (rural/ urban), years of schooling (<6 y, 6 to 12 y and >12 y) and general health status. Ethical approval was sought and obtained from the licensing institution of the hospital.

Most of the cases have been done by two surgeons. The Oxford Knee Scores were used to assess the patients before the surgery. The OKS is a 12-item patient-administered questionnaire evaluating pain and function. It is a reliable and validated outcome measure with 12 questions, each question with five possible answers, giving a score out of 60 [11]. Five questions for pain and seven questions for assessing function. The range of possible scores was therefore 5 to 25 for pain and 5 to 35 for function with lower scores reflecting better outcomes.

Patient satisfaction with the results of the surgery was assessed with six questions: (overall satisfaction, pain relief, ability to perform daily activity and the ability to participate in leisure activity after the surgery, how you would describe the result of your operation and if they will do the surgery again or no). Which was measured on a 5-point Likert scale (Excellent, very good, good, fair and poor)?

Most cases are done using cruciate-sacrifice prosthesis with a cobalt chromium bearing surface on an ultra high-molecularweight polyethylene insert surface cemented with a meticulous cement preparation technique. Three kinds of prosthesis used (Genesis II from Smith and Nephew, Scorpio from Stryker, PFS from Depuy). The surgical technique in all patients was an anterior midline approach with a medial Para-patellar arthrotomy. The most common technique for bone resection uses a 5° to 7° valgus femoral cut angle and neutral tibial cut. Additionally, a correct ligament balancing was performed to achieve equal and symmetric extension and flexion gaps. Extramedullary alignment guides were used for femoral and tibial cuts. Bicondylar femoral and tibial components were implanted and cemented. A polyethylene liner was inserted between the metallic tibial and femoral prostheses in all the cases.

Table 1. Health status of the patients participating in the study. 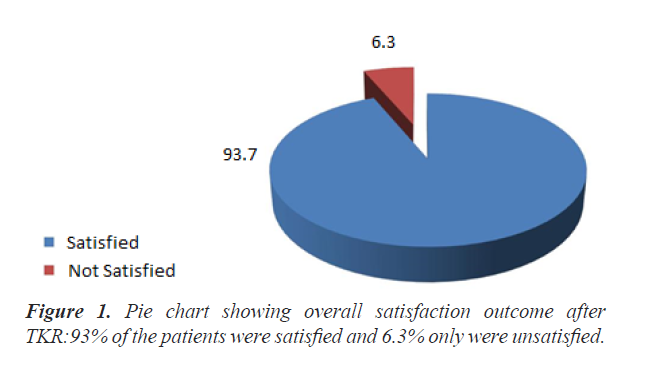 Figure 1: Pie chart showing overall satisfaction outcome after TKR:93% of the patients were satisfied and 6.3% only were unsatisfied. 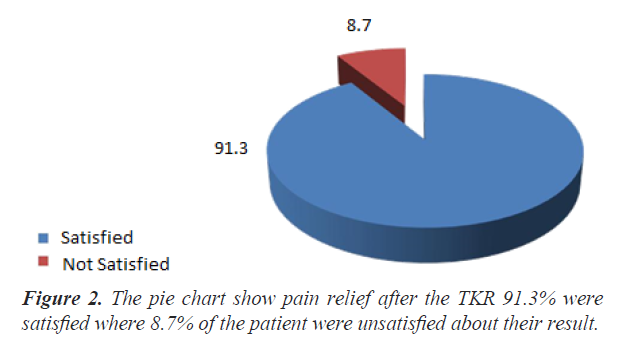 Figure 2: The pie chart show pain relief after the TKR 91.3% were satisfied where 8.7% of the patient were unsatisfied about their result. 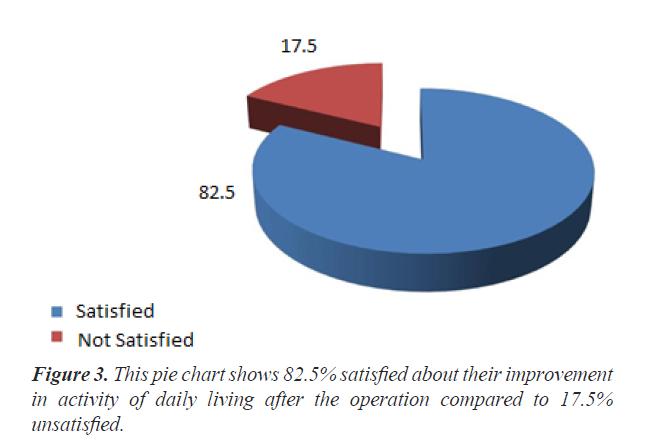 Figure 3: This pie chart shows 82.5% satisfied about their improvement in activity of daily living after the operation compared to 17.5% unsatisfied. 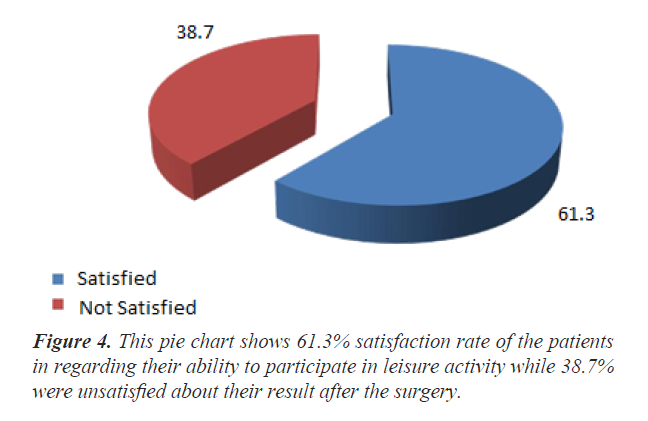 Figure 4: This pie chart shows 61.3% satisfaction rate of the patients in regarding their ability to participate in leisure activity while 38.7% were unsatisfied about their result after the surgery.

Knee replacement is currently one of the most successful orthopedic procedures due to its ability to relieve pain and longevity. A lot of studies suggested only 82% to 89% of patients were satisfied post primary knee replacement [2,5,9]. In our study, we found the overall satisfaction rate around 93.8%, which is higher than comparable studies. When the effect of the pain on patient satisfaction was considered, 91.3% of patients were satisfied. 82.5% of patients were satisfied if we consider the influence of improvements in function in form of their activity of daily living. Regarding participation in leisure activity after the surgery 61.3% only were satisfied about their outcome. Levels of patient satisfaction depend on their expectations. Most of patients have high expectations of the outcome after knee replacement. The patients sometimes have higher expectations of pain relief than function improvements [12]. Also the stronger effect of pain on levels of satisfaction than that of functional impairment may occur due to differences in patient expectation. This leads us to the fact that priorities are different between individual patients. While some patients may accept residual pain, another might not accept, but instead they might tolerate some degrees of functional limitation. This raises the importance of spending time and pre-operative care to determine the expectations of each individual patient. Although most previous studies have found that preoperative pain and function are not associated with satisfaction after surgery [7,13], some suggest that patients with less pre-operative pain are more likely to be satisfied with the outcome of TKR [9]. Also the patient’s expectations regarding their post-surgical health state and the inability to meet them is a very significant risk factor for dissatisfaction [14,15]. It is well known that pre-operative pain and functional level differ from one country to the other [16]. The outcomes of TKR have been traditionally assessed by surgeons using invalidated scoring systems in which the patient was asked about their level of pain and return to specific activities, followed by the surgeon objectively measuring range of motion and joint stability. This raises the point that patients and doctors do not always agree on quality of improvements after therapeutic interventions [17-19]. Considering the Limitation of our study, one of it was the number of patients involved in the study is few compare to other study as it was not easy to follow up some of the patients. Also, we did not evaluate patient expectations before surgery, which is closely related to their satisfaction [20-22]. But we only retrospectively asked whether their post operative expectations were met. Our study reinforces the importance of the effect of pain and functional outcomes in assessing patient satisfaction and supports what have been mentioned at other study [22].

Patient satisfaction is an important outcome measure and should be assessed in addition to traditional outcome scores post TKR. According to the present study, there is a strong correlation between improvement in pain and functional activity after TKR and patient satisfaction.

No benefits in any form have been received or will be received from a commercial party related directly or indirectly to the subject of this article.