The cost of quality: Open reduction and internal fixation techniques versus percutaneous K-wire fixation in the management of extra-articular hand fractures.

Hand and wrist injuries are common and debilitating, accounting for 20% of visits to the Emergency Department [1], 10% of all fractures [2], and the loss of 3-4 million work days per year in the USA [3].

There is still little high level evidence to guide a clinician in treatment of hand fractures. While fractures are often managed with splints alone, sometimes they require fixation. The eponymous K-Wires, initially described by Kirschner in 1927 [2,4], have been employed for percutaneous fixation for a century because they are considered both simple and cheap (Figures 1-3) [5]. On the other hand, open reduction and internal fixation (ORIF) with either plates or screws is also an old technology, having been introduced by Sir William Arbuthnot Lane at the end of the 19th century [6]. Lane pioneered the use of plates (Figure 4), particularly for long bone fractures. In his view, malunion of lower limb fractures caused great economic harm, “the average financial depreciation of many varieties of labourers after such an injury was enormous.” For Lane, the quality of the fracture fixation and subsequent functional recovery was worth the cost of opening and reducing the fracture and th en internally fixating it. In 1895, he declared in the British Medical Journal that the existing standard of care for such fractures was “both cheap and bad” and went on to describe why closed reduction and splinting fails to achieve equivalent results to ORIF: 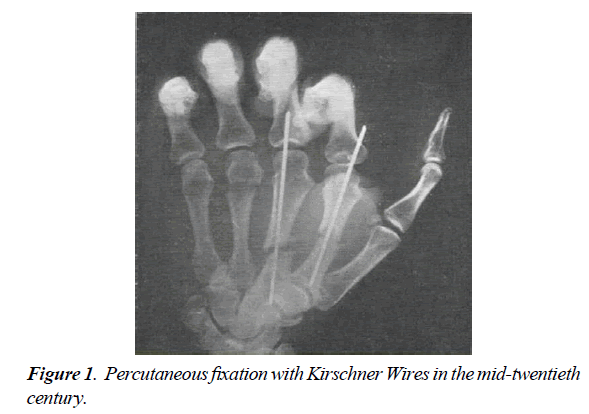 Figure 1: Percutaneous fixation with Kirschner Wires in the mid-twentieth century. 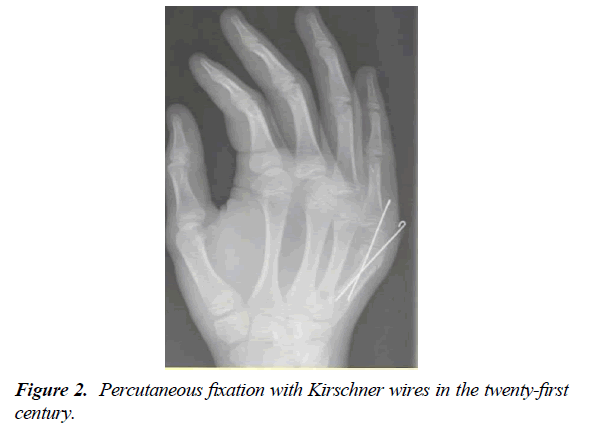 Figure 2: Percutaneous fixation with Kirschner wires in the twenty-first century. 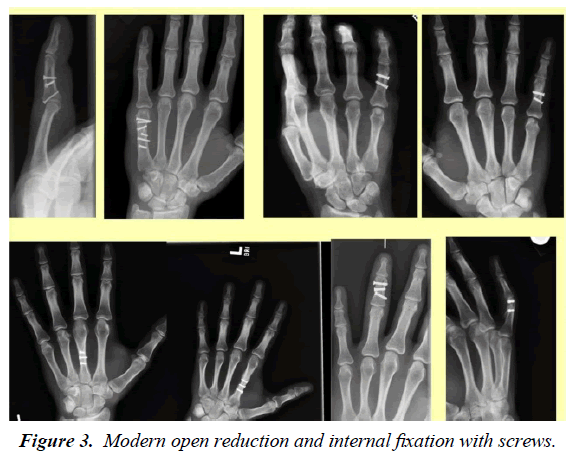 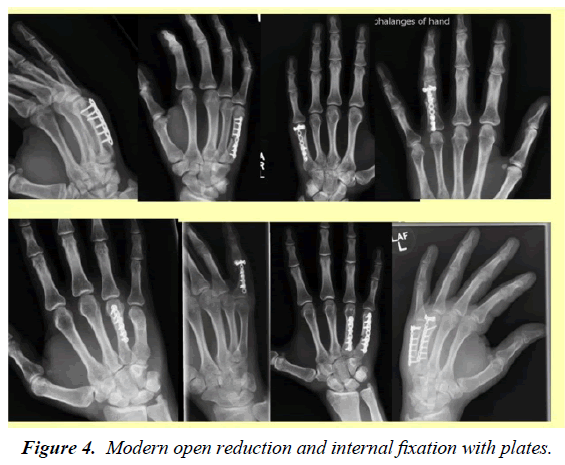 It is cheap since it enables many patients to be sent home very soon after its application, and its cost is very small. It is bad since the presence of haemorrhage and effusion renders it impossible to replace the fragments in accurate apposition in the majority of cases and the apparatus perpetuates the bad position [7].

Thus, for the sake of quality, he departed from the accepted orthopaedic practices of his day, developing ORIF techniques much later popularized by the AO foundation.

And yet the introduction of Lane’s techniques to hand surgery were slow in coming and have largely been reserved for fractures which were comminuted, pathologic, irreducible, intra-articular, multiple and displaced, or otherwise unstable [8-12]. A similar parallel may be observed in the management of maxillofacial trauma with plating. Only in in the early 1960’s- six decades after Lane- did plating begin to be widely employed in maxillofacial trauma, whereas now there is great acceptance for its role [13]. Indeed, over the past 15 years, there has been a steady increase in the popularity of ORIF in the management of extra-articular hand fractures. As Freeland and Orbay stated, “the ease and reliable maintenance of anatomic restoration with secure fracture stability throughout the healing process and the opportunity for intensive rehabilitation are relative benefits of an open procedure [8].” Furthermore, technology developed in the past two decades has yielded higher-quality and lower-profile hardware which has made ORIF an emerging alternative to K-Wires for less complex fractures. However, there is very little literature comparing K-Wires to ORIF in hand fractures.

The purpose of our study was to compare Kirschner Wires (Figure 2) to plates or screws in the management of extraarticular hand fractures using clinical parameters including pain, initial and final active range of motion, and number of medical visits. Furthermore, we wished to additionally examine the difference in cost.

This study was approved by the Institutional Review Boards (IRB) of our university (No. 14-449) and local hospital (No. 510839-2). We collected hospital, outpatient, and occupational (hand) therapy data from 47 fractures, 24 managed with K-Wires and 23 with ORIF, in a retrospective chart review. Matching criteria included age, BMI, causation, sex, smoking, diabetes mellitus, laterality, and co-morbidities (Table 1). There were 33 metacarpal fractures and 14 phalangeal fractures. We used Statistical Analysis Software to perform Student t-tests and Pearson’s chi-square tests.

The following were inclusion criteria for an operation: metacarpal, proximal, or middle phalangeal fracture for digits 2-5; closed fracture. The following were exclusion criteria: intra-articular fractures, open fractures; surgery requiring concurrent operation (e.g. tenolysis, osteotomy). Tables 1-3 characterize the fractures respectively by demographic data, morphology, and fingers fractured. All ORIF was performed with the Osteomed Hand Plating System (Osteomed, Glendale, California, USA). All of the ORIF’s and 14 of the K-Wires were performed by the senior author. In order to obtain matched comparison data, two other hand surgeons’ cases were used for 10 of the K-wires. This study was performed in Michigan.

Total active range of motion (TARM) was measured and pain assessed subjectively on a patient-reported scale of 0-10 at the first and last occupational therapy (OT) visits after surgery. Cost-effectiveness was examined by analysing operating room time, hardware costs, post-operative surgical visits, and occupational therapy visits, not including hospital and doctors’ fees. The basic cost to run an operating room- including general anaesthesia, supplies, staff and general expenses- was calculated by the operating room financial office at $20.71 per minute. This did not include hardware costs which we have individually accounted for based on the cost to the hospital for the K-Wires or Osteomed implants for each surgery. Surgery follow-up visits were estimated to be $108 based on clinical financial records. OT appointments were estimated to be $97.62 based on CPT code 97110 at 45 minutes using Medicare rates for Mid-Michigan.

Closed reduction and percutaneous fixation: The K-Wires were introduced into the metacarpal distally either in pairs or single and passed across the fracture line, followed by immobilization and splinting for two weeks and then gradual active range of motion exercises using occupational therapy in a dorsal block splint, with wires removed between four and six weeks according to fracture stability and patient tolerance.

Open reduction and internal fixation: Either 1.2-1.6 mm plates or 2.0-2.4 mm cannulated screws were employed, followed by immediate active range of motion using occupational therapy and protection by buddy tape. Plates were used for comminuted or transverse fractures, while screws (Figure 3) were reserved for oblique and spiral fractures.

In reviewing the literature, there have so far been only a handful of studies comparing K-Wires to ORIF in hand fractures. We found three studies comparing K-Wire placement to ORIF in fifth metacarpal neck fractures. Ozer et al. found that loss of fracture reduction and complications were relatively more common for intraosseous wires [14]. Fujitani et al. found that there was a more rapid return to strength with ORIF but noted that the range of motion for the intramedullary group was improved at 12 months [15]. Facca et al. found improved range of motion for the intraosseous group.16 These studies place the intraosseous K-Wire in an anterograde manner with specialized wires, which differs from our technique of retrograde metacarpal placement using straight K wires [14-16]. These studies only involved 5th metacarpal neck fractures and there is less literature on other sorts of hand fractures; while numerous studies exist which evaluate either K-Wires or ORIF in non-fifth metacarpal neck fractures [17-22], we could find only one that directly compares percutaneous fixation (Figure 1) with K-Wires to ORIF, a 2003 randomized control trial of 28 proximal phalangeal fractures fixed with lag screws by Horton et al. They found that ORIF had fewer infectious complications and ROM was similar except that a few of their ORIF had tethering of the intrinsic muscles, with no overall significant difference in the outcomes or complications between the methods of fixation [17]. Most of Horton et al.’s K-Wire patients were women (nine females out of 16), while only six out of 24 of ours were. Also, the mechanism responsible for the fracture varied considerably in our populations (Table 1).

Mobilization is crucial for functional recovery [23]. Consensus thought is that mobilization of the hand should occur within 4 weeks of treatment [24,25]. A number of studies suggest that early motion initiated within 21 days after injury produces a better recovery of strength, range of motion, and earlier return to work [8,24]. On the other hand, immobilization for longer than three weeks has been shown to increase stiffness as a long-term outcome [26,27]. It has previously been shown that whereas mobilization may occur in the second week with ORIF, it must wait until the 4th week with K-Wires (when the K-Wires can be removed) [28,29]. We found that ORIF allowed patients earlier mobilization than K-Wire fixation. This is one possible explanation for our better outcomes with ORIF. Furthermore, K-Wires require extra care and maintenance- ORIF is advantageous in patients who are non-adherent or less reliable [8,30].

Economic impact is important to take into consideration. In the early years of the 20th century, Lane realized the significant economic impact of poor bony union of lower limb fractures and examined ORIF versus the cheaper alternative of splinting (K-Wires were not around at the time) (Figure 5). He found the former, though more expensive, provided better quality. Cost effectiveness is no less relevant in the 21st century. ORIF was, on average, 60.7% more expensive in our study than K-Wires because of the increased hardware cost and lengthier operating time required to install it. However, one positive cost feature of ORIF was that it required an average of one less post-operative visits to the surgeon’s office. 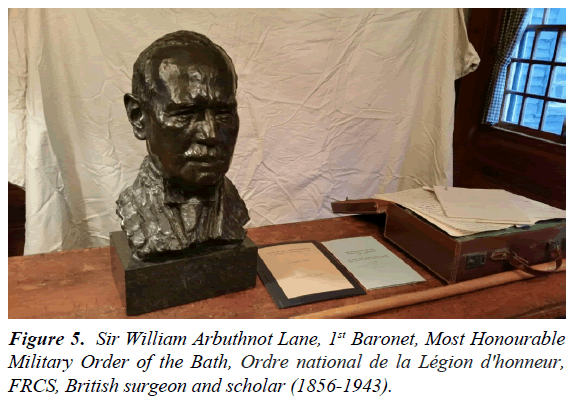 The cost of healthcare is often thought of in terms of costs to the patient and his or her insurer, or to the healthcare system. However, because of the central role of the hand as an organ to work, perhaps the most important impact of hand injury with regards to cost is its toll on economic productivity. In fact, a 2012 Dutch population-based study concluded that the loss in productivity following hand and wrist injury is more expensive than the cost of treatment itself, constituting 56% of the total cost.1 When it comes to the United States, loss of productivity from phalangeal fractures is estimated to cost in excess of $2 billion per year [31,32]. This large number does not include metacarpal (40% of hand fractures) [28,33] or other fractures! Hence, although ORIF represents a more expensive initial investment than percutaneous fixation with K-Wires, its cost effectiveness must take into account the effect on productivity and any cost saving to society as a whole (Figure 6). 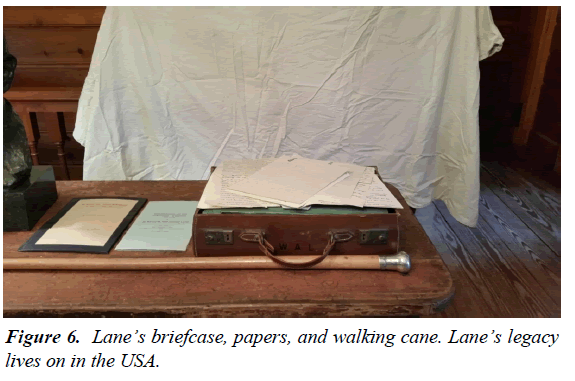 Our study was limited in that we lacked qualitative questionnairebased outcomes such as the Q-dash score and we did not evaluate grip strength. Furthermore, while our population is larger than previous studies, it is still only of a modest size. This reduced our ability to avoid potential confounding factors such as the fracture patterns, methods of K-wire or ORIF stabilization. A larger study could have assessed fractures in different bones separately; there were insufficient phalangeal fractures to achieve significance but we were able to demonstrate significance for metacarpal fractures alone. Thus, a future study would benefit from a larger sample size.

In conclusion, our study of extra-articular fractures of metacarpals and phalanges demonstrates that ORIF was more expensive than K-Wires. However, it offered greater active range of motion, was less likely to have superficial infection as a complication, was less painful at the conclusion of occupational therapy, and required less post-operative follow up visits to the surgeon’s office. Our literature search reveals a lack of evidence comparing the two methods of fixation. Whereas we believe our data may be useful to the clinician in determining fixation methods for all extra-articular fractures, we accept this data is most specific to metacarpal fractures. Only prospective trial data can deliver us a final verdict using our current surgical technology; the future remains full of possibility. 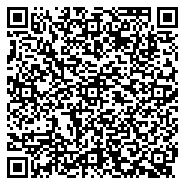