Introduction: Diagnosis of congenital heart diseases including Hypoplastic Left Heart Syndrome (HLHS) in prenatal becomes a routine practice. It allows better preoperative management and offer opportunity to parents and physicians to intervene earlier. We described differences in survival outcome for patients diagnosed prenatally or postnatally with HLHS in and who had surgical intervention study area. Methods: Survival analysis using Kaplan-Meier product limit method was performed to estimated probability of survival for 88 patients diagnosed with HLHS and surgical intervention. The primary outcome measures were 12 months survival after birth and after surgical intervention. Results: Overall one year survival for HLHS patients was 63%. There was difference in survival between the two study groups (65% vs. 60%) for postnatal and prenatal diagnosis of HLHS respectively. This difference was not statistically significant (P=0.4). On the other hand, there was variation in survival according to intervention (80% vs. 0%) for patient who underwent surgery and those who declined surgery correspondingly. The difference was statistically significant (P<0.0001). However, there was no statistically significant difference in survival between prenatal and postnatal diagnosis of HLHS after surgery (67% vs. 63%; P=0.7%) respectively. Conclusion: In this study surgical intervention increases survival for patients diagnosed with HLHS, but there was significant difference in survival between prenatal or postnatal diagnosis of HLHS. Further studies of large sample size are prerequisite to investigate survival outcomes in Hypoplastic Left Heart Syndrome.

Hypoplastic Left Heart Syndrome (HLHS) is characterized by a diminutive left ventricle incapable of supporting the systemic circulation. HLHS incidence rate up to 3 percent of all congenital heart disease, with a prevalence rate of two to three cases per 10,000 live births [1,2]. HLHS is the most common form of functional single ventricle heart disease [3]. Several population-based and clinical studies observed male predominance in occurrence of HLLS [4,5]. There is underestimation in incidence rate most likely due to spontaneous abortions and elective termination of pregnancy of affected foetuses. Advances in surgical and medical interventions have improved outcomes of this condition. However, mortality remains high and survival rate after surgical repair still controversial in several report from numerous studies. Echocardiographic imaging remains the gold standard method for diagnosis of HLHS, whether preor postnatal [5-9]. In the meantime, the question of whether prenatal diagnosis of HLHS affects the postnatal outcome is controversial. However, reduction in acidosis, improved survival, long-term benefits and cost-effectiveness were reported [10]. Hypoplastic Left Heart Syndrome reveals spectrum of structural cardiac malformations characterized by severe under development of the structures in left heartaorta complex. Its incidence varies from 0.1 - 0.25/1000 live birth. Accordingly, HLHS constitutes the highest cardiograph detection rate (2/3). Easiness of fetal diagnosis of Hypoplastic Left Heart Syndrome usually correlates positively with its severity i.e. the more easily diagnosed Hypoplastic Left Heart Syndrome in one group of patients the higher severe characteristics of that group, hence the lower chance of its survival. Detection during first months of pregnancy may represent an indication for termination [11]. Prenatal recognition of HLHS provides an opportunity to plan post natal management in terms of optimizing the condition of affected baby to undergo surgical intervention. Moreover, with the introduction of Norwood (NW) three-step reconstructive operation as well as heart transplantation in neonates improved prognosis of HLHS was highly ensured [12]. However, long -term comparative survival outcome studies from the two procedures are scant. As HLHS survival and functional outcomes from NW operations are highly questionable, firm recommendation about its validity is needed. NW1 carries the highest surgical risk (operative survival 46-76%), in contrast NWII and NWIII which have much lower (5%) mortality [13-15]. The aim of this study was to describe differences in survival outcome for patients diagnosed prenatally or postnatally with HLHS in and who had surgical intervention in tertiary referral centers for pediatric cardiology and cardiac surgery in study area.

A retrospective comparative analytical study of patients diagnosed with HLHS prenatal and postnatal conducted. HLHS diagnosis was performed using data from pediatric cardiology and cardiac surgery centers in Eastern Region of Saudi Arabia. Echocardiography was done to diagnose HLHS of foetus prenatal and infants postnatal. Eighty eight patients were identified of whom, 43 newborns diagnosed prenatally with Hypoplastic Left Heart Syndrome (HLHS) in (37-42 weeks) and confirmed postnatal and 45 newborns diagnosed postnatally with HLHS in the first 4 weeks of life. Main outcome measure was survival till 12 months after Norwood surgical procedure.

Total number of patients who were included in the study (n=88) out of them 43 (49%) and 45 (51%) were diagnosed in prenatal time and postnatal period respectively. There was no variation in the proportion between the two study groups. Among prenatally diagnosed fetus with HLHS none of the parents had chosen to terminate the pregnancy, thus all the 43 were born alive. Overall, 71 patients in the study who underwent surgery was of them 35(49%) from prenatal group and 46 (51%) from postnatal group. There was statistically significant difference in the overall proportion of those who underwent surgery and those who did not (81% vs.19%; P<0.0001). Moreover, there was statistically significant difference between the two group in selection of surgery (100% vs. 79 %; P=0.0004), for prenatally and postnatally diagnosed patients respectively. Among 34 fetus who were prenatally diagnosed with HLHS, 43 (81%) after birth underwent surgery while in the postnatal group 36 (80%) underwent surgery. There was statistically significant difference in proportion of patients whose parents selected surgery and those who declined the treatment in both group (P<0.0001). However, there was no statistically significant difference in proportion of patients whose parents declined the surgery (20% vs. 19%; P= 0.8) for prenatal and postnatal respectively (Table 1).

Fellow for both diagnosis groups for 12 months was conducted and survival analysis was performed to assess the impact of diagnosis on outcome. Overall mean survival time for both groups was 11 months. There was no statistically significant difference in mean survival time between the two groups (11.2 vs. 11.0) for prenatal and postnatal HLHS diagnosis respectively. Although the postnatal diagnosed patients has high freedom of survival than prenatally diagnosed patients (65% versus 60%) for prenatal and postnatal respectively. There was no significant different in survival between the two groups (P=0.4) Figure 1. 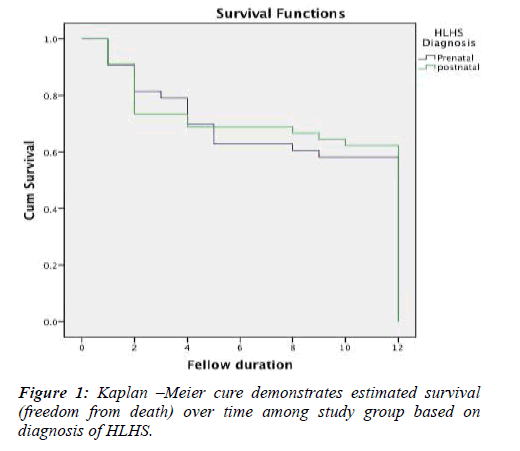 Figure 1: Kaplan –Meier cure demonstrates estimated survival (freedom from death) over time among study group based on diagnosis of HLHS.

Follow-up for survival for both groups was conducted parallely to all patients who underwent and relinquished surgery in both groups for a period of 12 months. Overall survival was 56 (80% versus 0%) for surgery and no surgery respectively. There was statistically significance difference (P<0.0001) Figure 2. The finding revealed that prenatal has better survival that postnatal (67% vs. 63%) respectively, but there was no statistically significant difference in survival between prenatal and postnatal diagnosis of HLHS after surgery (P=0.7%) Figure 3. 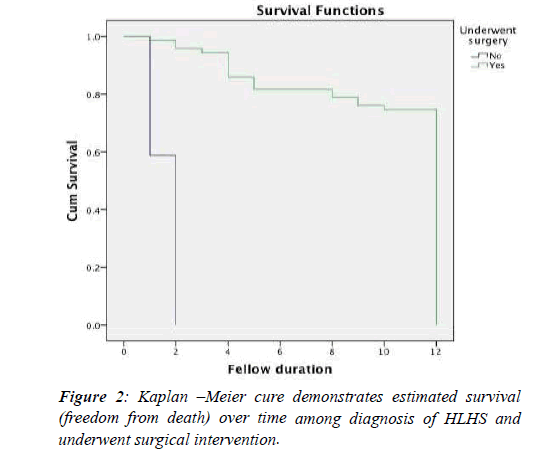 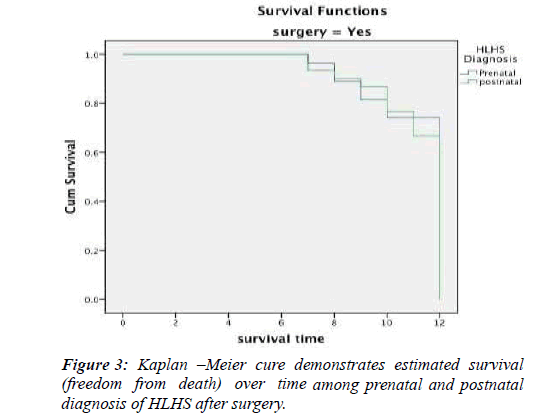 Incidence of HLHS occurs up to 3 % of all congenital heart disease, with a prevalence rate of two to three cases per 10,000 live births [1,2]. HLHS is the most common form of functional single ventricle heart disease [3]. A male predominance, with a ratio approximately 1.5:1 male to female respectively, as was observed in most population-based and clinical studies [16,17]. The reported overall incidence is likely underestimated because of the indeterminate rate of spontaneous abortions and elective termination of pregnancy of affected fetuses. Although, its low incidence relative to other congenital cardiac disorders, HLHS, if left untreated, is responsible for about 25% to 40% of all neonatal cardiac deaths [18]. This evidence supports our study findings in which the overall death was 24% among patients whose parents declined surgery. Infants with HLHS are more likely to be born prematurely or at low birth weight than infants without HLHS [19]. Fetuses with HLHS have decreased growth velocity in late pregnancy compared with unaffected fetuses, resulting in small for gestational age presentation [20].

In spite of substantial improvement in surgical survival and advances in intensive medicine, patients with HLHS remain at risk many problems postoperative that jeopardize their survival [21-24].

Diagnosis of HLHS in prenatal has remarkable benefits. It permits amble time to parents to have sufficient counsel as well as it allows time for both parents and physicians caring to plan perinatal management. In several healthcare facilities patients diagnosed prenatally were found to have a more stable preoperative course [25,26].

In another study by Shekerdemian et al. [34] in Australia, they found that the survival to intensive care discharge and stage 2 palliations was 74% and 68% respectively, and was not influenced by timing of diagnosis. In another study by Degenhardt et al. [29] stated that the survival rate was 40.9 % after prenatal diagnosis and there was an 81.1 % survival rate in infants undergoing surgery and a 64.1 % survival rate from an intention-to-treat position. However, Noon-Grady [8] and his colleagues reported high rates and they found no difference in survival rate after surgery between the prenatal and post postal diagnosed patients (91% versus 89%).They concluded that in their recent experience has shown that prenatal diagnosis of HLHS was not associated with a survival advantage. This conclusion matched our study findings.

This is the first study in the region to compare survival outcome prenatal and postnatal diagnosed hypoplastic left heart syndrome. The study findings showed that there was statistically significant difference in proportion of patients who underwent surgery and didn’t, in both pre and postnatal diagnosed patients with HLHS. However, the findings revealed no statistically significant difference in survival outcome between prenatal and postal diagnosed patients. On the one hand these findings were convergent with some studies; on the other hand they divergent of several studies. Further study with big sample size is needed to confirm the generated evidence by this study.