Transcatheter Techniques (TCT) has largely replaced open surgical procedures in majority of cardiovascular disorders. Ostium Secundum Atrial Septal defect (OS ASD) is a common congenital a cyanotic heart disease especially among adults. Majority of small to moderate sized OS ASDs and some large ones are suitable for percutaneous device closure (class I). However, some large ASDs and non OS ASDs warrant surgical closure. Though safe, complications have been encountered during and after transcatheter closure. These include residual shunts, embolization of the device, device-related thrombosis, erosions and perforations of the heart, infective endocarditis and sudden death. Of all the complications, perforation is the most feared complication with the reported incidence close to 0.1%. Most of the perforations are reported to occur in the first 48 hours after the procedure. However, Delayed perforations have been described by some operators especially of atrial dome and the adjacent aorta which are considered to be vulnerable to device erosions. Cardiac erosions can manifest as hem pericardium, cardiovascular collapse, and sudden cardiac death. Larger devices are used for closure of defects with deficient rims this may increase the risk of friction between the device and the atrial or aortic wall resulting in tissue erosion and perforation. We are presenting a case where tear of right atrial posterior wall occurred while manipulating the delivery sheath and device in Right Atrium (RA).

Less invasive procedures are being preferred over surgical treatments by patients as well as doctors because of fewer complications and shorter hospital stay. ASDs account for approximately 10%-15% of all congenital heart diseases. Nowadays 85%-90% of all secundum ASDs can be closed safely by using a transcatheter approach [1]. Nonetheless only OS ASDs and PFOs are amenable to device closure. Seven types of ASD closure devices are available: Amplatzer septal occluder (Abbott), Gore Helex Septal Occluder, Gore Septal Occluder (GSO), Cera septal occluder (Lifetech), v).Clamshell, Cardioseal and Starflex (FSO), Biostar, and Figulla Flexible Occlutech septal occluder. Of all the available devices, only Amplatzer and Cera septal occluders are popular among implanters. Amplatzer is the commonest device used across the world because of ease of implantation and familiarity. Perhaps due to the huge volume of implantations worldwide, the Amplatzer (Abbott) occluder is associated with the majority of cardiac erosions reported in the literature [2]. Best current estimates of the incidence of erosion with the Amplatzer septal occlude was between one and three cases per 1000 implants. Most events occur early after implantation [3]. There has always been a search for less invasive alternative to surgery for closing secundum ASD for decades. King and Mills performed the initial experimental transcatheter closure of ASDs in dogs in December 1972. The initial patient to undergo device closure with the King-Mills umbrella was a 17-year-old girl [4]. Her ASD was closed using a 35-mm King-Mills umbrella without difficulty on April 8, 1975 [5]. Transcatheter closure of secundum ASD was first described by King and Mills in 1976. Amplatzer device was introduced in mid-1990 and it was a real game changer for congenital cardiac interventions. With the experience gained from percutaneous closure of ASD closure, cardiologists gradually became confident in applying same skills for the percutaneous management of other structural heart defects.

A 30 year old lady presented to the cardiology out-patient with complaints of exertional breathlessness and palpitations of 3 months duration. Clinical examination revealed wide and fixed splitting of second heart sound (S2) with accentuated pulmonary component including an ejection systolic murmur. Trans-Thoracic Echocardiography (TTE) confirmed presence of large OS ASD. Trans Esophageal Echocardiography (TEE) demonstrated 18- 20 mm size OS ASD with deficient aortic (Anterosuperior) rim. However, other rims were adequate and inter atrial septal span was 40 mm. Past history was unremarkable. After discussing with the family the feasibility, benefits and risks of percutaneous closure, she was taken up for the device closure. Right superficial femoral vein was punctured using modified Seldinger technique under local anesthesia and a 6 F sheath was introduced. ASD was crossed with Judkins Right (JR) coronary catheter and entered left lower Pulmonary Vein (PV) with the support of 0.032 wires. Then 0.032 wires were exchanged for 0.038 Amplatzer extra stiff wires. We selected 24 sizes Cera device (Lifetech) for closure of ASD. Then 6 F sheaths were exchanged for 10 F delivery sheath. Procedure was done under TEE guidance. As device developed cobra deformity during deployment (Figure 1), it was withdrawn into delivery sheath (Figure 2). While manipulating the assembly to reenter the LA across ASD, patient complained of inter scapular pain. As TTE did not show any pericardial effusion we continued the procedure and deployed the device successfully (Figure 3). One hour later, patient started complaining of left shoulder pain and breathlessness. On examination, patient appeared pale and was profusely sweating and there was sinus tachycardia with a rate of 130 bpm and Blood Pressure (BP) of 90/70 mmHg. Transthoracic echocardiography demonstrated mild pericardial effusion. Suspecting perforation, 18 gauge needles was inserted into the pericardium through epigastrium and aspirated about 50 ml of blood and introduced 5 f sheath over a 0.032 guide wire and aspirated another 100 ml. Patient condition stabilized after aspiration of 150 ml of blood from the pericardium. Simultaneously, CT surgeon was consulted and Operation Theater was alerted. She was immediately shifted to operation theatre for repair. Surgeon noticed a rent in the posterior wall of RA. Rent was repaired with purse string sutures (Figures 4 and 5). However, device was left in-situ as it was well deployed and far away from the site of perforation. Subsequent recovery was uneventful. She was discharged on fifth post-op day. 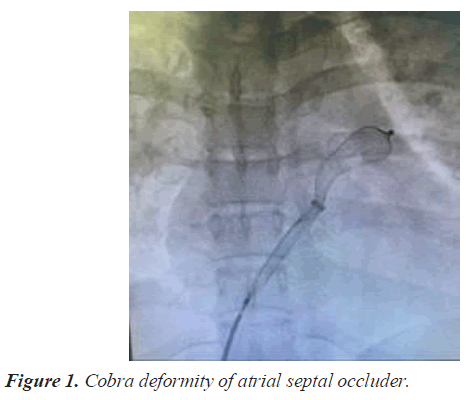 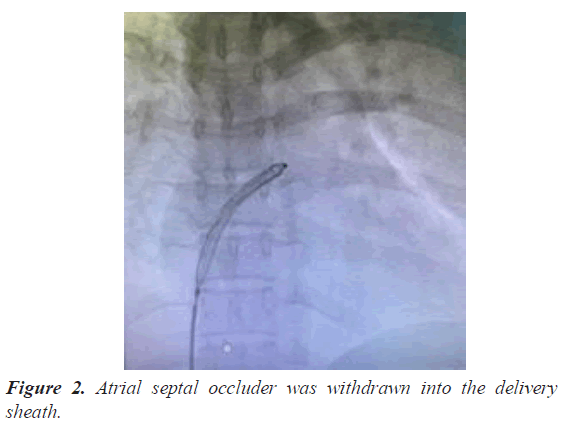 Figure 2: Atrial septal occluder was withdrawn into the delivery sheath. 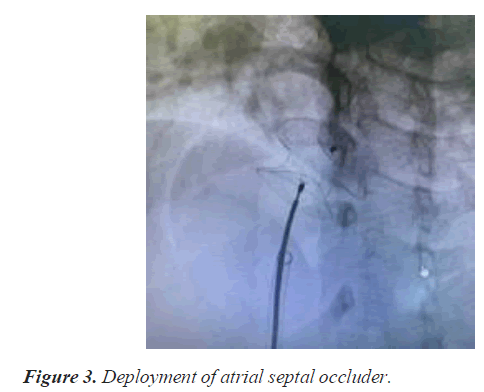 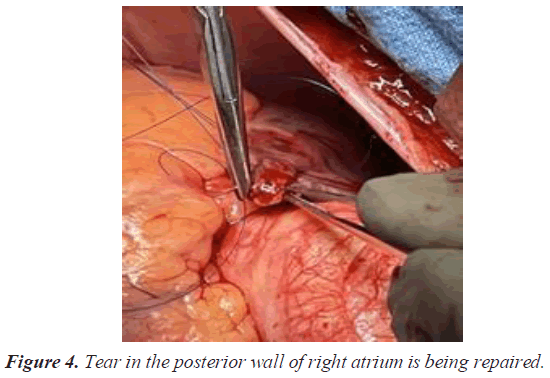 Figure 4: Tear in the posterior wall of right atrium is being repaired. 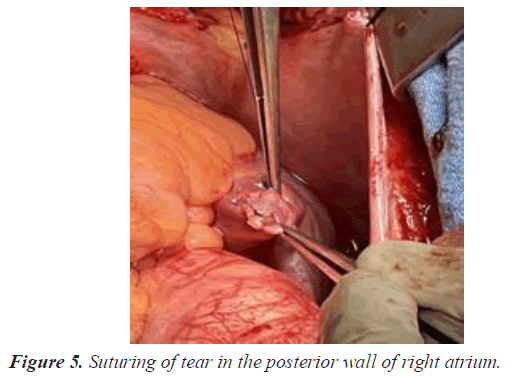 Figure 5: Suturing of tear in the posterior wall of right atrium

Percutaneous procedures are replacing much surgical procedure for the correction of structural heart defects and are gaining acceptance among patients and doctors equally. Though device related cardiac erosions are rare but cardiac erosions are serious life threatening complications [6-8]. Amplatzer septal occluder associated cardiac perforations involve the antero-superior atrial walls and adjacent aorta. In our patient, after failing to deploy in first attempt, we withdrew the device partially into delivery sheath and tried to negotiate ASD to reenter left atrium (LA). We presume that was the time when RA free wall was breached by the device because patient had sharp inter scapular pain. Being a thin walled structure, RA is highly vulnerable to tears by stiff catheters. So, any complaint by patient during the procedure needs attention.

Although complications are inherent to any invasive cardiac procedure, however, we can minimize them by paying adequate attention to selection of cases, selection of appropriate size device, being meticulous while performing the procedure and immediately recognizing the complications prevents fatality [9]. For any reason, if a device can't be deployed in first attempt, it should be removed and entire procedure should be started all over again because manipulating the delivery sheath along with device can prove dangerous sometimes.

This is to finally conclude close observation during first 24 hours after the procedure is mandatory and subsequent follow up should be meticulous. Patientand family should be informed aboutpossible complications and how to identify them. We felt perforation was not due to erosion by device but occurred due to catheter manipulation in the right atrium. Surgeon did not consider it necessary to remove the device because perforation was at a distance from device. It has been more than 20 months and patient was doing fine.