Introduction of direct-acting antivirals (DAAs) for chronic hepatitis C (HCV) has significantly improved sustained virologic response (SVR) for HCV-infected patients. However treatment of HCV for some HIV/HCV co-infected patients has been deferred due to drug interactions with concomitant antiretroviral medications. Here we report the experience of three subjects who had advanced liver fibrosis due to HCV who underwent supervised ART interruption to allow HCV therapy with DAAs.

Since the introduction of antiretroviral therapy (ART), the life expectancy of persons with HIV has increased dramatically. For the estimated 25% to 30% of the HIV positive population coinfected with HCV, complications related to HCV have become major causes of morbidity and mortality [1]. With the approval of DAAs for HCV in 2011, treatment efficacy has improved significantly. However, potential drug interactions between DAAs and ART regimens remain a significant hurdle in widespread treatment of HIV/HCV co-infected patients with novel HCV therapy. For those co-infected patients with advanced fibrosis or cirrhosis and previous null response to treatment as well as no viable options for ART change due to acquired HIV resistance, supervised ART interruption to allow HCV therapy may be a viable option to prevent decompensation and mortality.

Three HIV/HCV co-infected patients with compensated cirrhosis were offered supervised ART interruption to allow for HCV treatment. All patients were counselled prior to interruption and made aware of the risks of viral rebound, acute retroviral syndrome, increased risk of HIV transmission, decline of CD4 count, and potential for HIV progression, and complications. All subjects were required to have closed clinical and laboratory monitoring during ART interruption and the immediate follow up period.

These patients were treated prior to the FDA approval of NS5A inhibitors, thus the HCV therapy was a combination of sofosbuvir (SOF) 400 mg/day, and simeprevir (SIM) 150 mg/ day, with or without weight- based ribavirin (RBV) for 12 weeks. All subjects stopped ART one week before starting HCV therapy, and resumed one week after completion of HCV therapy. At the time of HCV treatment, none of the patients could be switched to a compatible ART regimen; all were highly treatment experienced with multiple prior ART regimens and extensive resistance profiles. Patient demographics and HIV profiles from an electronic medical record review are summarized in Table 1. All patients were closely followed with frequent monitoring of CD4 count, HIV viral load (VL), and HCV treatment related labs.

Table 1: Patient demographics and HIV profiles from an electronic medical record review of the subjects.

Subject A: He was a 57-year-old, African American transgender female diagnosed with HIV and PCP in 1995 and genotype 1a HCV in 2005. She was HCV treatment experienced with 2 courses of Interferon-based therapy. She was non-adherent to treatment the first time, because of the Ribavirin pill burden and a null responder to the second course with < 1 log10 reduction of HCV viral load at week 12. Her ART treatment regimen prior to retreatment of HCV was abacavir/lamivudine, darunavir, ritonavir, and raltegravir, and her HIV had been suppressed with VL < 75 copies/ml and TCD4 >1000 cells/ul for several years. Her baseline HCV RNA was 6.7 log10 IU/ml with Child- Turcotte-Pugh (CTP) score of 5, and given her past treatment history and stage 4 fibrosis by liver biopsy in 2009, HCV therapy was a combination of SOF, SIM and RBV for 12 weeks.

Subject B: He was a 62-year-old, African American female diagnosed with HIV in 2006 and genotype 1a HCV in 2007. She was a null responder to interferon-based therapy in 2009 with < 2 log10 reduction of HCV viral load at treatment week 12. Before treatment with DAAs, she was found to have a CTP score of 6 and grade 2 varices on esophagogastroduodenoscopy and was placed on a beta-blocker to prevent variceal bleeding. Her HIV was suppressed with VL < 75 copies/ml and CD4 >500 cells/ul on emtricitabine/tenofovir, darunavir, ritonavir, and raltegravir for years. Her baseline HCV RNA was 7.6 log10 IU/ ml, and given her previous null response and stage 3 fibrosis in early 2007, cirrhosis could not be ruled out. Her HCV treatment was a combination of SOF, SIM and RBV for 12 weeks.

Subject C: He was a 61-year-old, African American female diagnosed with HIV Stage III disease without evidence of opportunistic infection (OI) and genotype 1b HCV in 1999. She was HCV treatment naive, and HIV was suppressed with VL <75 copies/ml and CD4 >500 cells/ul for years while she was on emtricitabine/tenofovir, darunavir, ritonavir and raltghbfghegravir. With her baseline, HCV RNA of 5.9 log10 IU/ml, liver biopsy significant for F3-3.5 in 2011, and CPT score of 5, she was treated with SOF and SIM for 12 weeks.

All 3 subjects completed 12 weeks of HCV therapy and achieved sustained virologic response (SVR) at 12 weeks’ post completion of therapy. In subject A and B, the use of RBV was associated with significant drops in haemoglobin requiring RBV dose reduction, and transfusion in subject A. As expected, HIV virologic rebound occurred in all subjects following ART interruption, however 2 months’ post completion of HCV therapy, all subjects had an HIV VL that was < 100 copies/ml, and all were fully suppressed at < 75 copies/ml at the 6-month follow up visit. Concurrent with the anticipated rebound of HIV RNA, all subjects experienced a drop in CD4 count throughout the ART interruption as illustrated in Figure 1. Subject A went from 1246 cells/ul at baseline to 238 cells/ul at the end of treatment, subject B went from 595 cells/ul to 273 cells/ul, and subject C went from 580 cells/ul to 315 cells/ul. No subject experienced a CD4 count < 200 cells/ul, CD4 % < 15%, or OI, and at SVR 12 visit, the CD4 count of the subjects were 720, 499, and 378 cells/ul respectively. 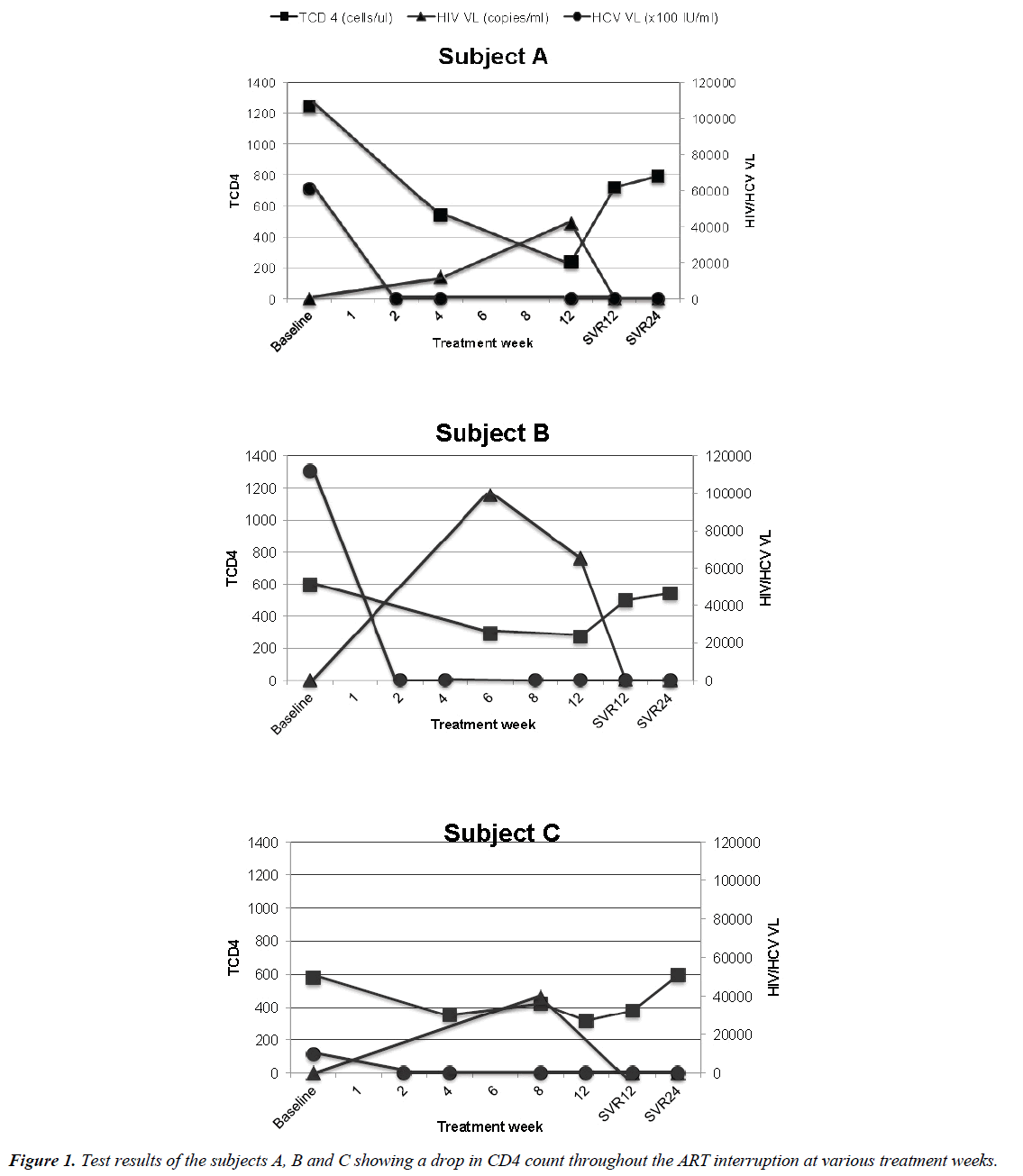 Figure 1: Test results of the subjects A, B and C showing a drop in CD4 count throughout the ART interruption at various treatment weeks.

This report demonstrates that brief, supervised interruption of ART in select patients, who are unable to switch ART, in order to allow for HCV therapy is a viable alternative for patients who are in imminent danger of morbidity and mortality from liver disease. High CD4 counts, adherence to strict monitoring schedules and dedicated supervision of HIV and HCV parameters are vital in achieving preferred outcomes. All three subjects tolerated HCV therapy without clinically relevant declines in CD4 counts below 200 cells/ul, and none developed symptoms of OI or hepatic decompensation. Despite the fact that HIV treatment interruption was found to be associated with mortality in the SMART study, [2] the data indicates that the risk of progression of disease or death only began to exceed that in the ART treatment group at around 4 months [3,4]. Our subjects were only off ART for 14 weeks.

Furthermore, all 3 subjects have cirrhosis; without eradicating HCV, the risk of developing hepatic decompensation and hepatocellular carcinoma would remain high and ultimately require liver transplant. Although HIV is no longer an absolute contraindication for transplantation based on the Organ Procurement and Transplantation Network policies, post-transplant care in patients with HIV is significantly more complicated than in HIV negative patients as HIV coinfected patients experience earlier HCV recurrence and require management of ART in the setting of concomitant immunosuppressant [5]. Additionally, achieving SVR improves not only liver related mortality but all- cause mortality [6,7].

The risk-to-benefit ratio favors treating HCV with ART interruption in this special population. It should be emphasized that supervised interruption of ART to allow HCV therapy is not a universal option. Providers should follow IDSA/AASLD guidance on managing HCV in this population, preferably by choosing the most compatible DAA regimen. While pharmacokinetic is not within the scope of this brief report, the relative half-life of ARVs should be taken into consideration when contemplating ART interruption. Furthermore, an interruption of ART is only viable in patients with relatively higher CD4 counts and stable HIV disease in the setting of advanced fibrosis. Patients with a higher risk of morbidity and mortality from decompensation of cirrhosis rather than progression of HIV infection may benefit from this strategy. Moreover, close monitoring of patients for emergence of symptoms of HIV disease and OI is warranted throughout the treatment interruption until complete HIV suppression is achieved with reintroduction of ART. Finally, providers could obtain an HIV genotype during viral rebound as this would provide an opportunity to gather information related to genotype and resistance mutations that has been lost or is unknown.

There are limitations to our report. First, as more DAAs become available there may be fewer drug interactions with ART, making it unnecessary to weigh the risks of ART interruption. If all three subjected were treated today, ledipasvir/sofosbuvir, or daclatasvir-based regimens could be used without the need for ART interruption. Conversely, despite the numerous new DAA’s available today, some co-infected patients will be unable to find a compatible HCV treatment regimen. For instance, none of these subjects’ ART regimens were compatible with Elbasvir/ Grazoprevir, which is the only available HCV treatment for people with chronic kidney disease. Secondly, this is a very small sample size and further studies would be necessary to determine whether all patients would do as well.

However, based on our experience, ART interruption with close monitoring to treat HCV in select patients in danger of imminent hepatic decompensation and without options to switch ART could be a proposal that should be evaluated in a larger clinical trial.